Back in the day, Dennis did some long coaches by combining 2 Aristo Sierra shorties into one long coach. Paul then talked about something similar -
https://largescalecentral.com/t/lengthening-sierra-cars/81015

The Aristo Sierra coaches are getting easy to find. I have a box of 4 junkers in my FL home waiting for the chop, and then 3 more came up on FB for $100, so I seized the opportunity to chop them!

Dennis combined 2 coaches into 1 and ended up with 8 window pairs - about 16 windows. I figured with 3 coaches (Obs, Coach and Combine) I could make a long combine and a long Observation by adding the combine baggage area to the coach and the combine passenger area to the Observation.

The coaches are pretty old and beat up - out of 3 coaches which should have 12 steps, I got 5 useful unbroken ones. (But I know where there are more - in FL!)

Taking them apart was messy - the outsides were all dirty as if they’d been sitting on a shelf in a barn for 20 years. But the exploded diagrams are online so I managed to deal with them.
These coaches come with a cute light on the wall, which I ripped out with big pliers. The silver strip outside hides the socket they are glued in to, so I didn’t want to have to deal with new strips. 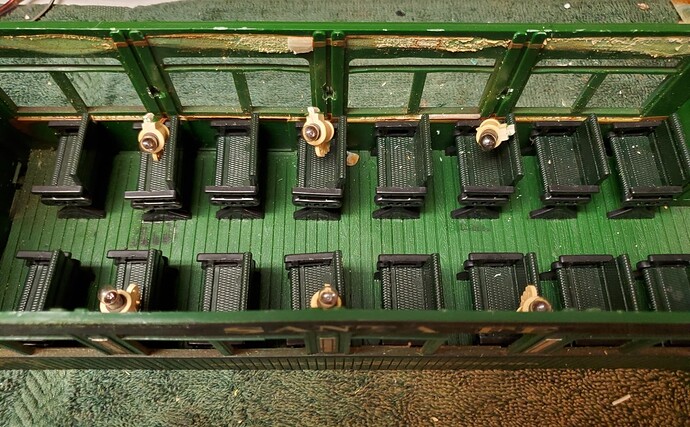 Then the wires all end up on a PCB underneath, which also got junked.

So after a scrub, out with the blue tape and the Micromark table saw, and away we go.

Here’s the first cut, separating the combine in to 2 pieces. 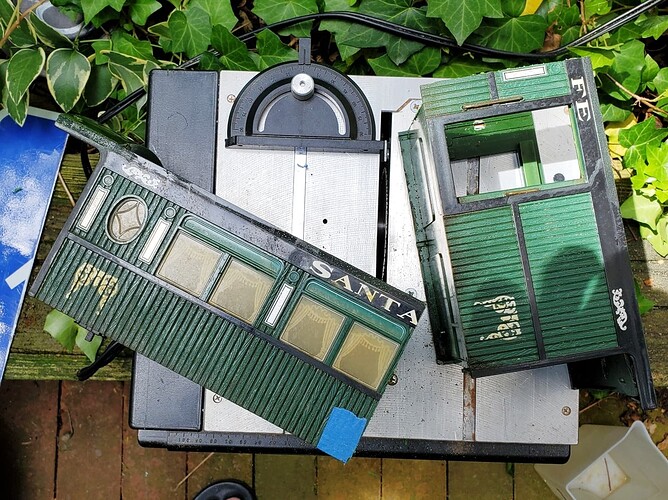 Then I chopped the ends off the coach and the Observation, making sure I got the right combination of toilet+stove at the right end. 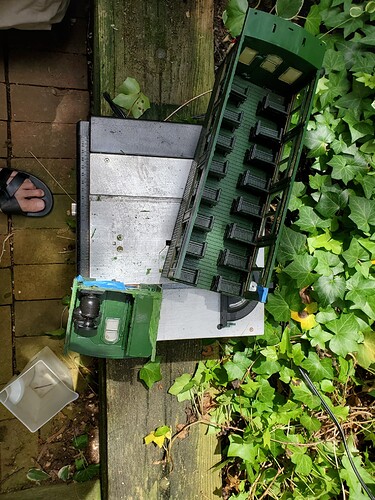 Here’s the first mockup on the kitchen counter. I had taken the glazing out first, but the coach is so brittle I started losing the crosspieces. I left the glazing in the other 2 - it can be removed later.

I then took the floor of the combine and cut it behind the bolster so it was longer than the baggage area, and cut the Observation’s floor to match aligned with the switches underneath. The offset overlap helps to strengthen them when glued. That left me with the coach floor and an end. Hmmm . . .

Anyway, it allowed me to set up both revised coaches on trucks and take a photo. 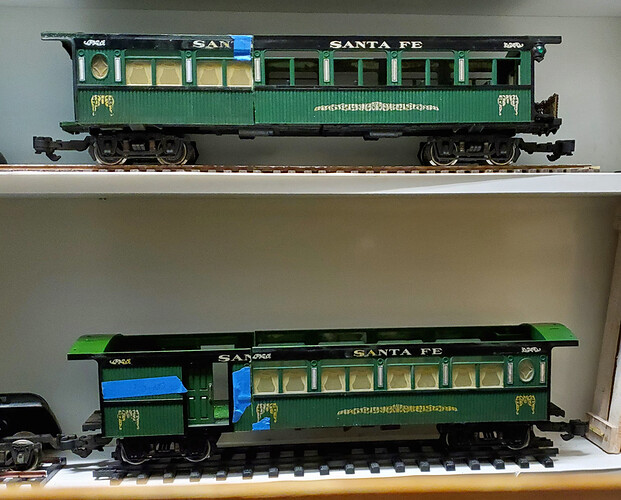 The other leftover makes a very short toilet+stove coach: 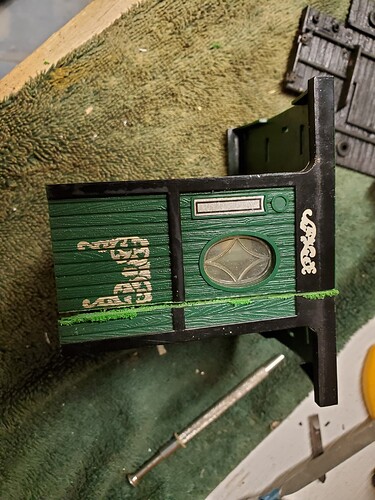 The other leftover makes a very short toilet+stove coach

Love it! I laughed out loud at this one!

The other leftover makes a very short toilet+stove coach:

Nice work. I do know a little German, and Regner kit assemblies added to the grey cells. Would there be so many -en endings though?

Back in the 1980s I made a 1-truck Pullman from a Walthers kit in HO. Neat little coach with a couple of seats and a full bathroom with a showering young lady printed on the shower curtain!

Nice work. I do know a little German, and Regner kit assemblies added to the grey cells. Would there be so many -en endings though?

Pete, after spending at least 4.5 minutes last night on that silly word, I’m grateful that you responded. Not being a fluent Deutschsprecher, I’m afraid I erred on the “en” side, just because you can never have enough of those in German. Or tsch’s. Or Umlauts.

So why did you leave them out?

Cuz I don’t know how to type them…

Sorry the the sidetrack…
Eric started it though…

Looking forward to your ongoing progress though, I have no idea how you’ll complete those joints but am eager to find out.

Cuz I don’t know how to type them…

While these forüms don’t have much by way of font choices, you can copy ‘foreign’ text from another docüment, like a Regner Manual: “Heißdampföl”.

how you’ll complete those joints

I’ve been out boating so they are still waiting for the clean-up. Usually I can slip a strip of styrene into a gaping joint, plus a little plastic filler, and then paint over it. These coaches, with their raised panels in black, will need some thought. I think I have to paint the sides anyway, as the gold bits are all in the wrong places.

I took the wiring strip from the Obs with me on the boat in order to figure out what was what.

20220730_140555_resized1635×790 204 KB
It has a full-bridge rectifier (next to the ‘CAR’ text) and the Obs ends where there are marker lights are tagged “+ -” so they are LEDs.
I did wonder why the truck connections for the pickups are reversed at one end. Of course - one truck is reversed from the other, but both have the same red/black wires in the same place, so they have to be cross-connected.

That PCB is now cut in 2. I just happen to have some 5-way flat cable to connect the 2 halves. I haven’t decided how the interior lights will fit, but I suspect LEDs again.

Thanks Pete, you just gave me a DUH moment, in that only LED’s require a polarity marking, leaving anything else (incandescent) as polarity insensitive.

I’m slowly figuring out how to put them back together. Having ripped out the old lights on the wall, there will have to be something done about the interior lights, but on the Observation, as noted, there is a full-wave bridge.

I happened to have a 5-wire ribbon cable so it was soldered to the 2 halves of the PCB.

In that pic you can just make out that the red marker light is on. Progress!

The issue I am wrestling with is that, to fasten the 2 halves of the coach together, I need to clean up the joint as much as possible, which means filing and testing the fit. As the PCB is soldered to various internal wires, it will be in the way if I want to split the coach apart. I guess it will have to come out until the joint is “perfect”.

Aristocraft, or Delton, or REA, or whever designed this didn’t intend to make disassembly easy. The trucks are wired to feed the lights and stove, and connect to a pair of pins that protrude through the underframe. (My feed wires in the pic are clipped to the pins at one end.) I think there might have been slip-on sockets for the wires so that the truck could be removed without un-soldering wires, but mine were soldered - which leaves open to speculation whether the sockets are soldered firmly to the pins and no longer visible! I’m still thinking about how to make the trucks removable without soldering.

A little more work today. It’s a shame that the underframe didn’t have any screws both sides of the joint.

I un-soldered the 5 wires so I could split it back in 2 pieces and cleaned the joint as much as I could. Then I decided it would need reinforement, so I dug out some 1/4" square styrene and cut the piece in half. It will fit under the seats as there is no room underneath. 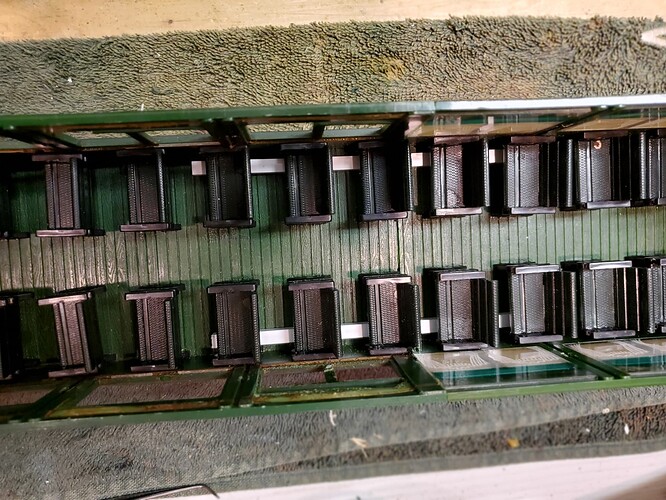 I painted the styrene flat black on 3 sides and started drilling for a screw to hold it in place. You will note there are 3 holes - I did get it right in the end. 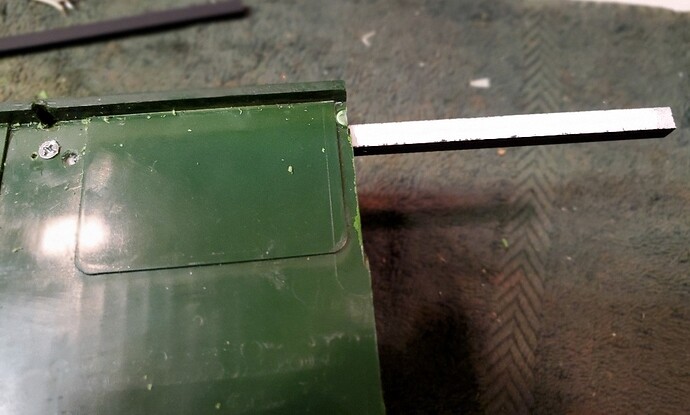 Here’s what it looks like with the 2 sides together. I suspect it will be invisible once the windows and roof are done. 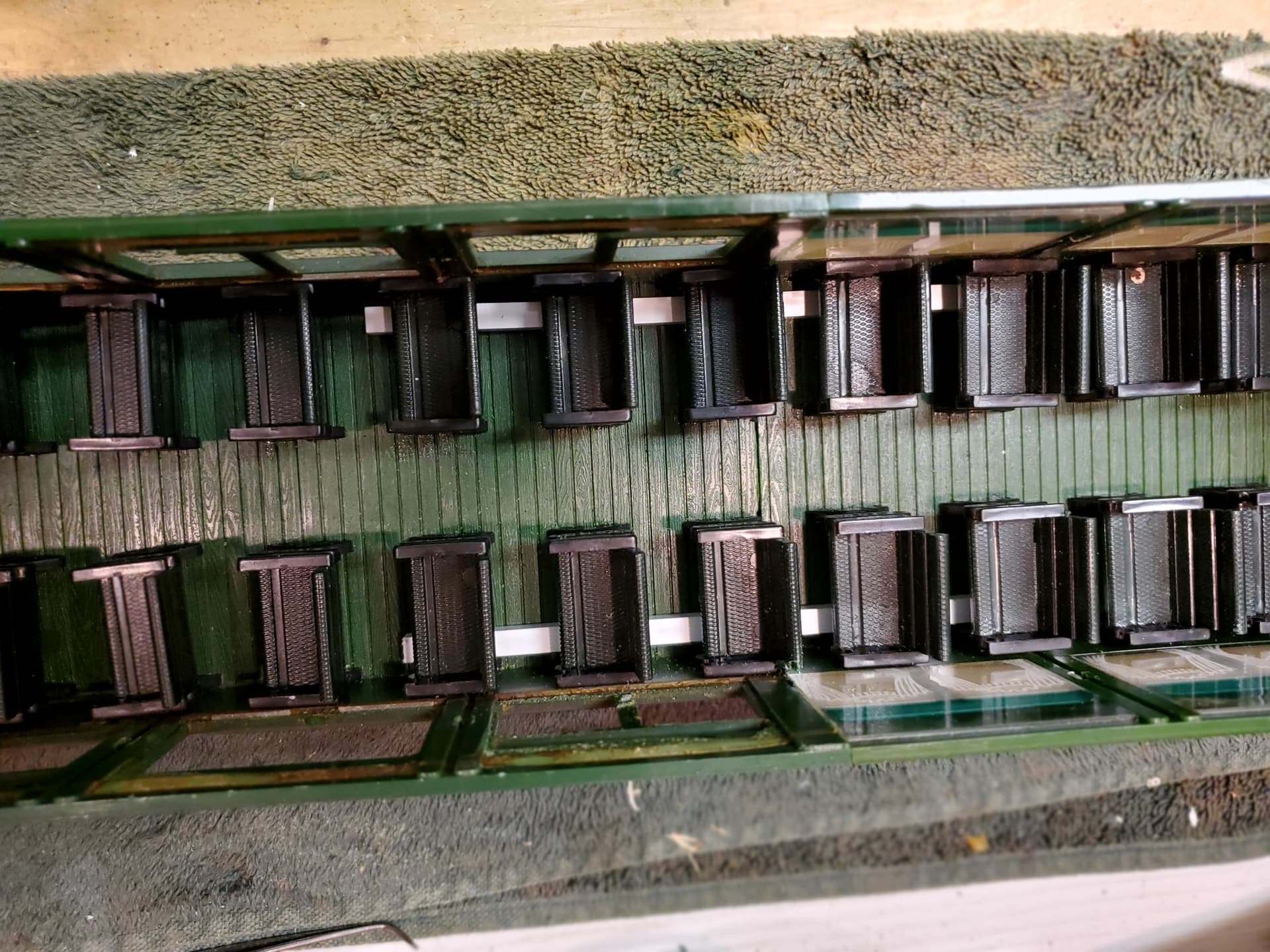 Perhaps you could call the structural addition “electric” baseboard heaters since the focus is electronics here.

Today was fix the roof day. I cut two roof pieces to make one roof for the longer coach. Reinforcements were added and it was glued. 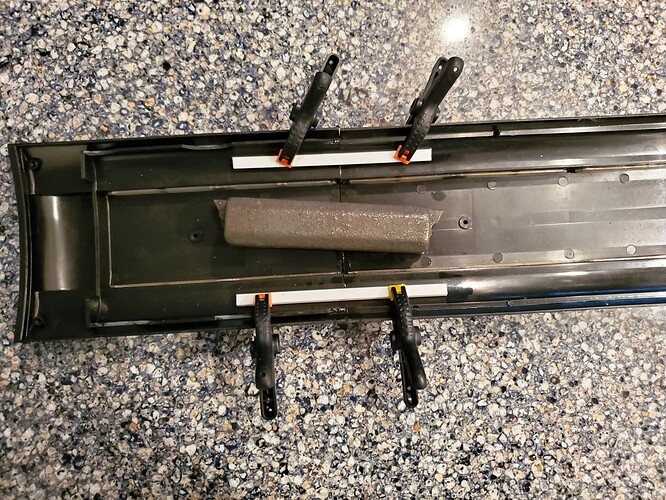 Hopefully it is the right length still - it was before I glued it.

I came across a truss rod while looking for the screws to fasten the roof. They have very nice turnbuckles which are threaded. I didn’t check if they have opposite threads. In any case, they are too short so I may have to thread some brass rod instead. 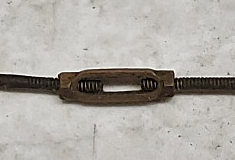 I think the Accucraft ones are threaded too - but like this, both RH threads. 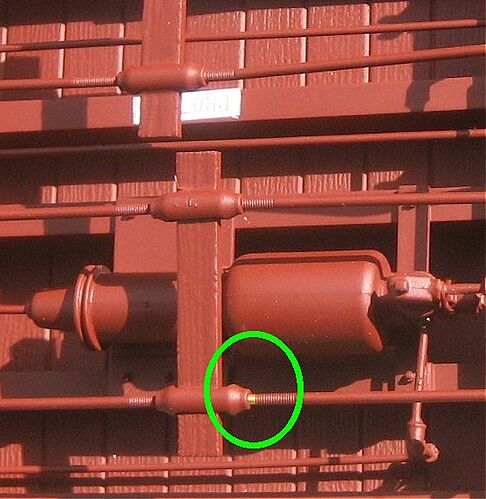 I think this may be some kind of “idiot proofing” to prevent the purchaser of the car from actually tightening the truss rods. Tightening those rods could either stress the material in the rods, or “hump” the car’s floor. John Allen built both hump-backed cars and sway-backed cars for his Devil’s Gulch & Hellengone narrow gauge railroad. Truss rods too loose equals sway-backed. Truss rods too tight equals hump-backed. BUT our model train cars don’t actually rely on the truss rods for support.

Dang, you’re right, I just checked one of mine and it has those (very slightly made) threads.

David, you’re right, but it might be nice in some circumstances to have working TB’s, not for the model truss rods to straighten the body out, but the other way around.

So when you tighten up the turn buckles does that affect the electric baseboard heaters in the cabin area ?