On a 1:20 scale steam railroad?? Well, here is one thing that could be done. The new crane sitting in the evening sun at the Redding yards. The only thing used on the carrying car from the original crane are the trucks and the under frame. The car was scratched from Styrene and has 2 and 1/2 pound lead sheeting as the under deck to add weight to the car. 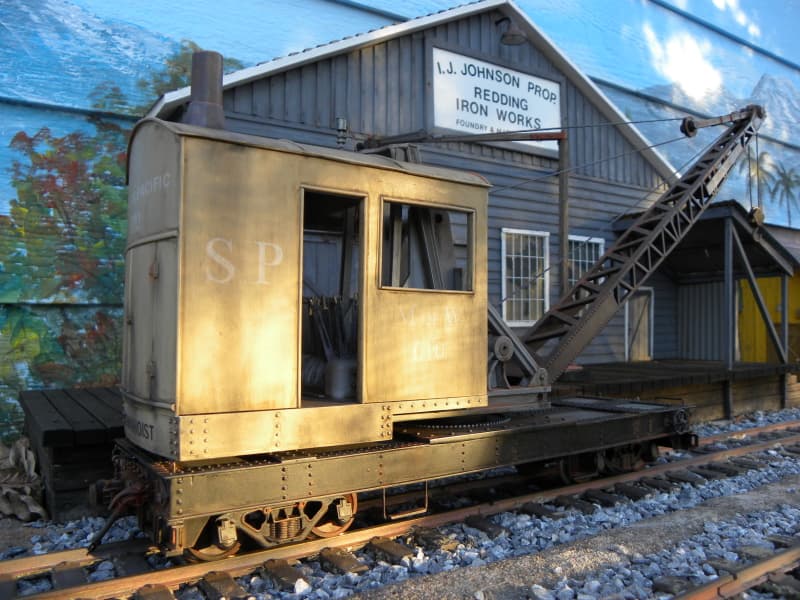 The “Brownhoist” lettering is vinyl stick on and the white lettering is decals made by Stan Cedarleaf. The new cab was scratched from Styrene 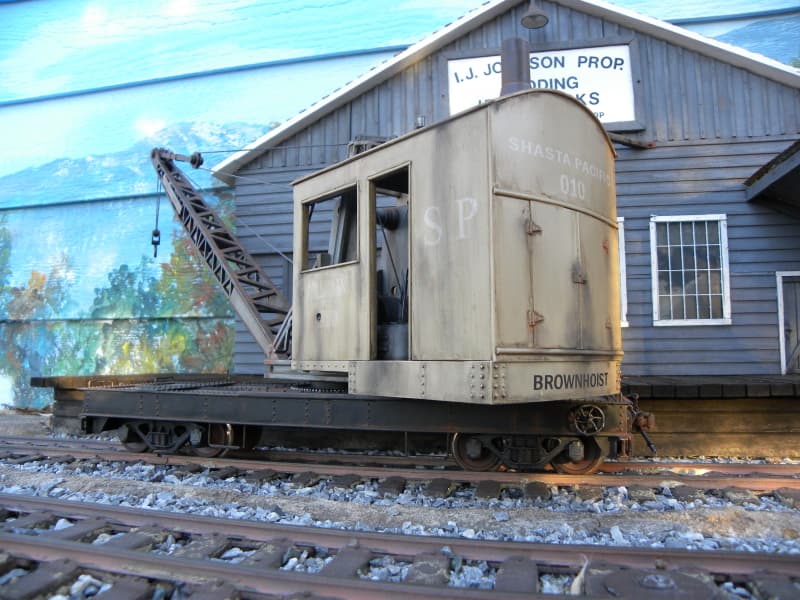 The original machine deck was used from the USA version but widened and lengthened to accomodate the boiler and tanks and operator deck in 1:20 scale. A new line tower was constructed from Styrene shapes and extended above the cab roof. The hole in the side of the cab is for the drum crank to raise and lower the boom. 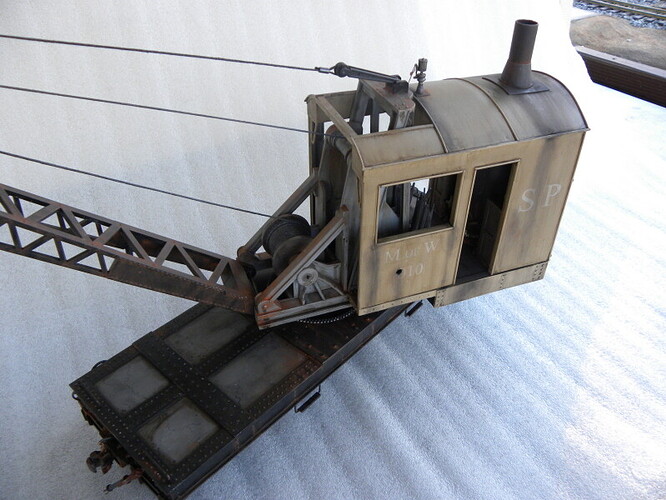 The ratcheting pivot deck was cut from the USA car and transferred to the new scratch car to maintain the integrity of the pivoting motion. 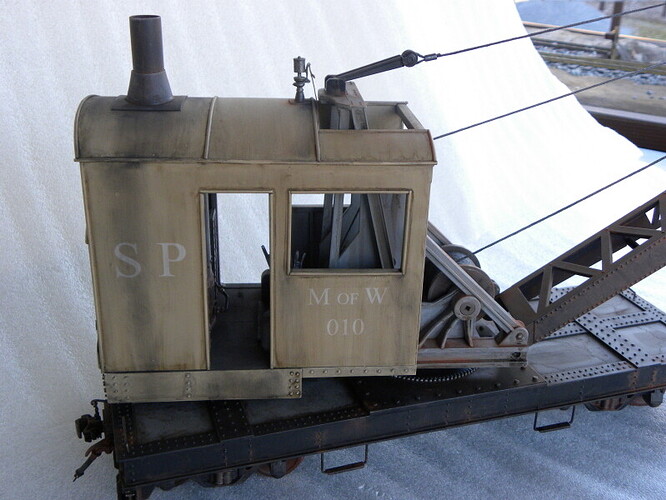 Here you can see the slide out beams (below the car end beam) that act as stabilizers when the crane is in use. They would be pulled out and shored up with wood blocks and or jacks. 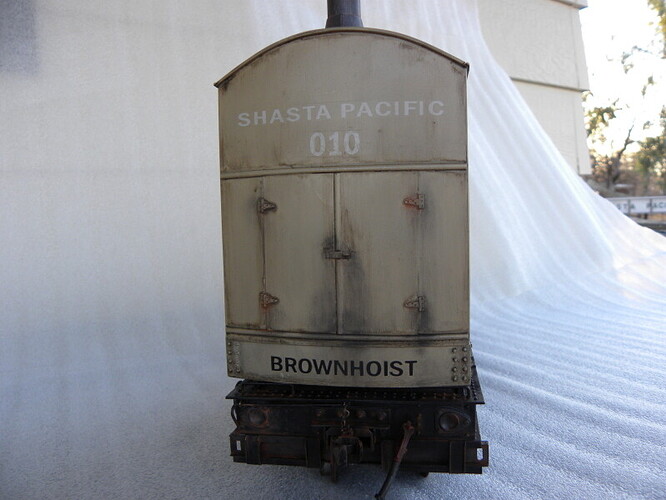 A little peek inside the cab. You can see the boiler and pressure gauge, the oil tank and some of the operating levers. 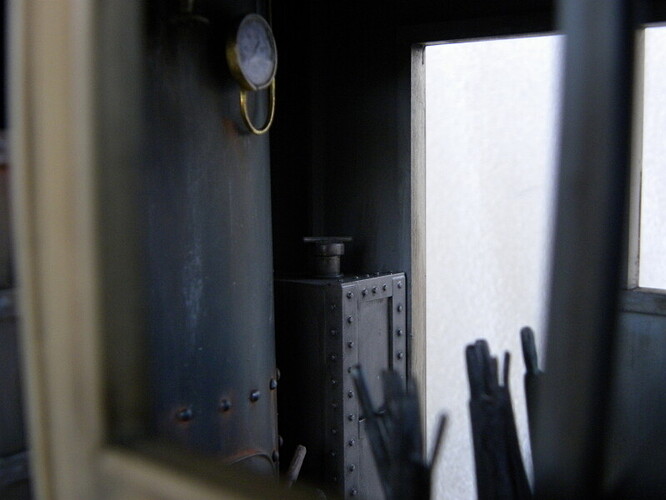 A close up of the car deck, you can see that the old concrete weight fill is cracking, probably won’t be long before weeds are growing from the cracks. Yes that was a lot of rivets to put in but who’s counting 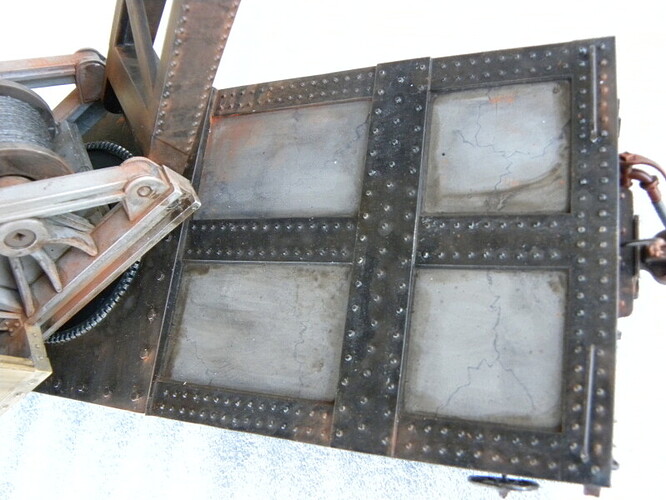 A comparsion shot of the two cranes, before and after you might say. 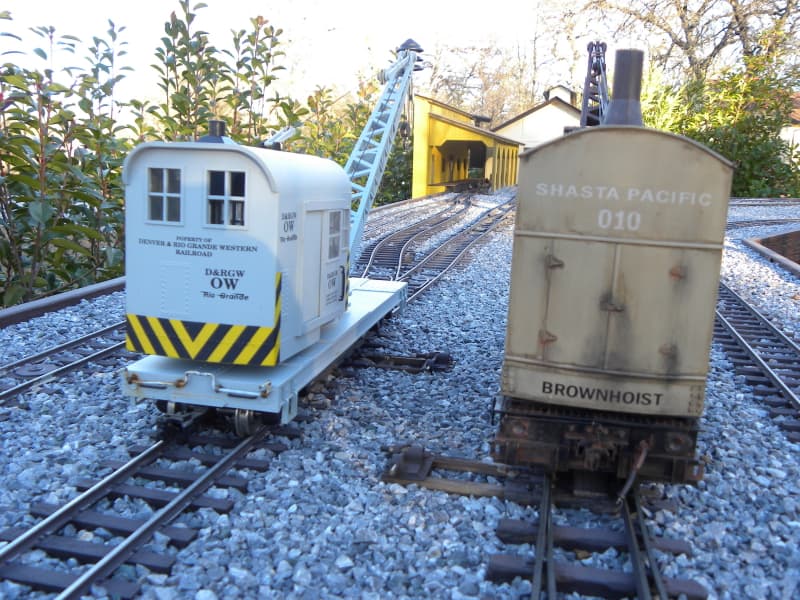 Another comparasion shot. The original boom was used without modification on the new crane except for paint and weathering. 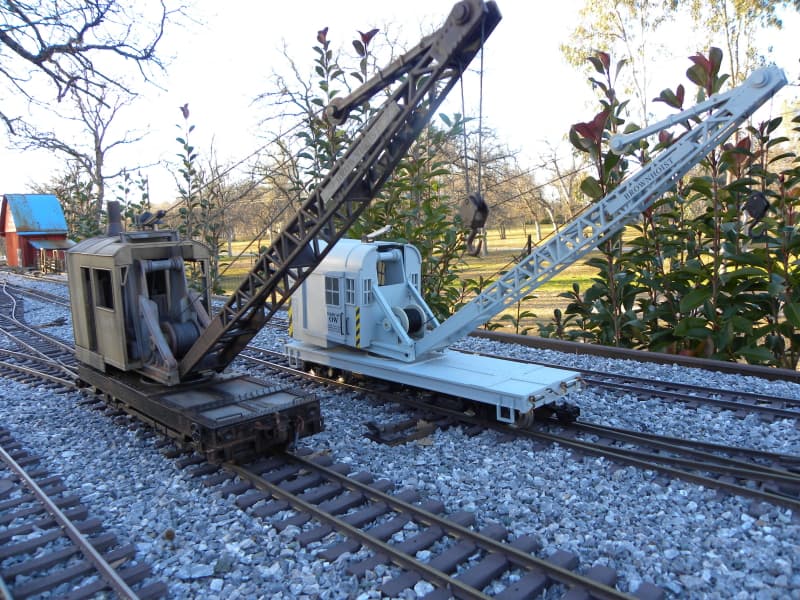 Thanks for taking a look Rick

Nice job, Rick.
I like it much better than the original

Very Impressive as usual Rick!!! Been thinking about bashing my USA crane since I bought it, will definately be filing these photos for when the time comes!
BTW what method did you use for the concrete, it looks great.

Very cool and clever bash, nice conversion from one scale to another.

Aaron Loyet said:
Very Impressive as usual Rick!!! Been thinking about bashing my USA crane since I bought it, will definately be filing these photos for when the time comes! BTW what method did you use for the concrete, it looks great.

Hi Guys,
Thanks for the comments, glad you enjoyed the pictures it was a fun project.

Aaron,
The concrete is Styrene.
There were several steps involved to get what I ended up with.

If memory serves, this is what I did.
1- The raw washed and dried styrene was primed with enamel primer.
2- sprayed with a “stone grey” satin enamel.
3- Sprayed with an Acrylic flat clear spray.
4- washed with a alcohol/black leather dye wash.
5- Cracks scratched in with sharp pointed awl (large needle) and X-acto knife.
6- cracks traced with black “Sharpie” pen and the ink immediately wiped off with
soft rag, leaving the ink down in the scratch. A very thin line.
7- Washed again with the alcohol/dye mix and worked off with a large dry paint brush.
8- Made a wash of burnt sienna artist oil color and odorless mineral spirits and washed
on different amounts with a small brush then wiped with a small piece of paper towel.
9- allowed some of the powdered rust and soot colors to drift onto the “concrete”.
10- I allowed at least 24 hours between each of these steps.

There is probably an easier faster method that gives better results but this is what I did.

Thanks for taking a look
Rick

Thanks for the tips Rick! It looks very realistic!

Very nice Rick! That’s exactly what I want to do with mine, so much so I’ll probly make a blantant copy…

Or, how bout I send you my crane and parts and you make me one?

Go ahead and send out the parts but I must warn you that this one sat on the shelf for about 6 years before I got it moved to the work bench to start the build. I would guess that we would be looking at about the same time frame on your build if it came through these shops. Of course there could always be unexpected delays

LOL!! Six years may be faster than what I get it done!! Again though, very nice work!

… I have at least two or three locos sitting in bits in my workshop - probably 5-6 years now - waiting for repaints, upgrades, repairs, whatever… maybe that’s just the way we do things. Start, then wait for further inspiration, or just plain get distracted by more pressing things. I keep trying, but reassembling them just refuses to move to the top of my list. Not interesting enough, I guess

Oh, I forgot to say - I love the crane, Rick. Really a good job! I want to do something like that myself one fine day, I hope fairly soon… 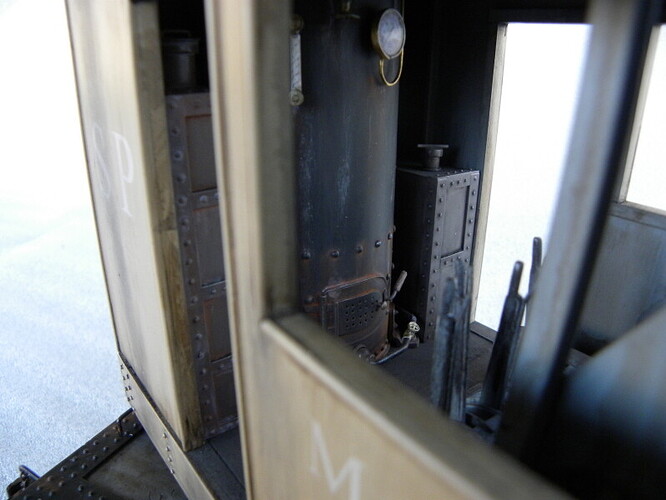 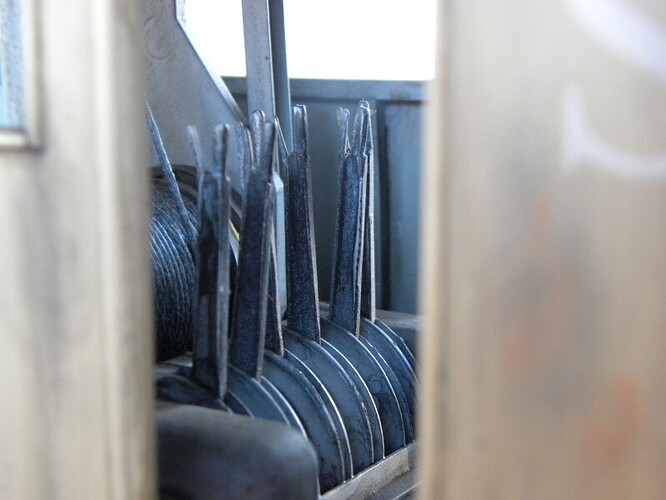 Another thread brought back to life.