What I've been up to lately

I haven’t had a lot of time for modeling so far this year, and what time I did have, has mostly been spent refurbishing older models. The newest structure is a through, plate girder bridge. Until now I’ve just had a crude temporary bridge made of wood, which has become badly warped: 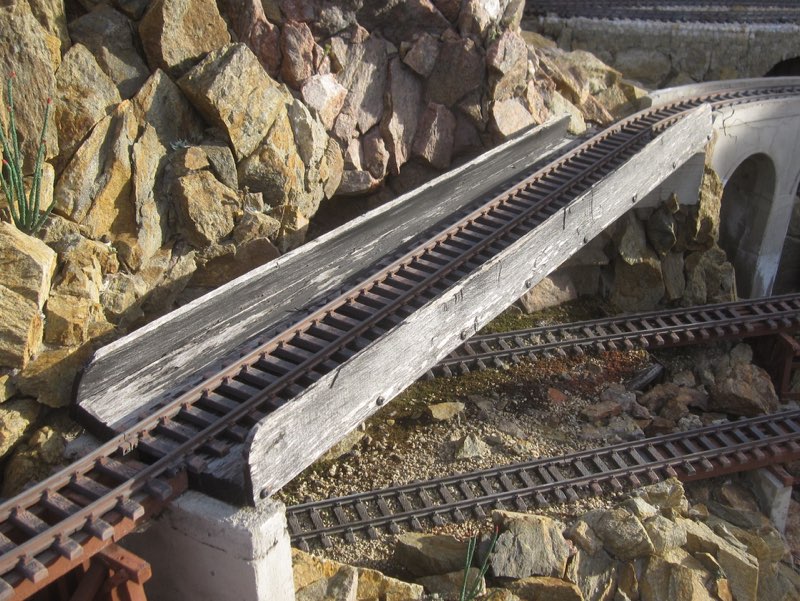 I built a permanent replacement for it. My previous plate girder bridges were all made using a structural fiberglass material called G10. This time, I wanted to try making it out of Sintra. I used 6mm Sintra for the deck and sides. The interior braces were made from 1mm Sintra. The rest of the details are styrene. I got a bit lazy on this bridge and decided to leave off the rivets – where it’s located, no one can get very close to it anyway. The underside of the bridge is strengthened with three lengths of 1/2" square acrylic tube, plus three sections of extruded aluminum angle for good measure. 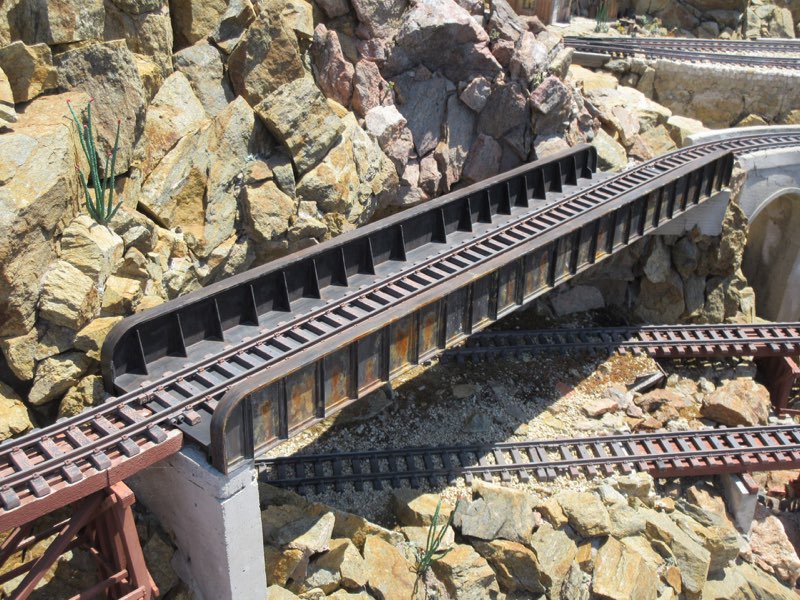 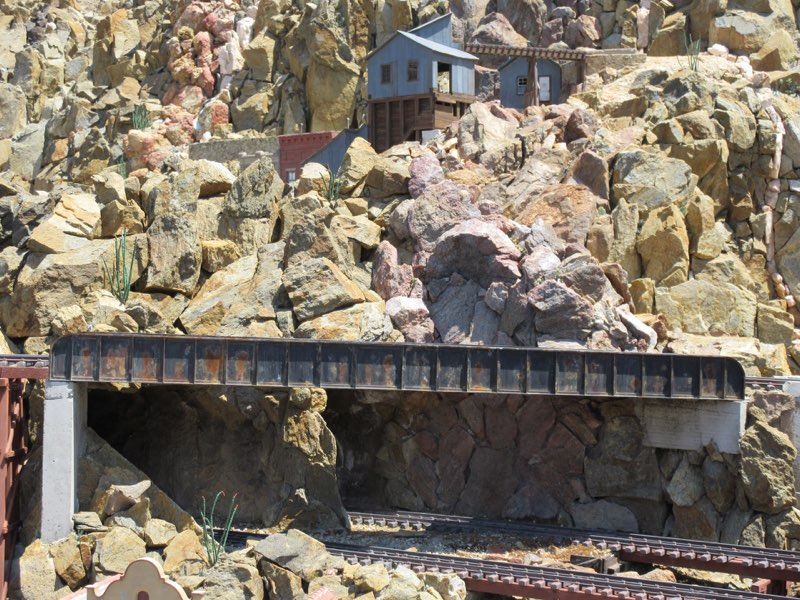 I sprayed it with red primer followed by gloss black. Then I weathered it with a thin, alcohol wash of gray acrylic paint. Then I used RustAll to create reddish rusty streaks. Next I used Sophisticated Finishes’ “Iron” and “Rust Solution”. 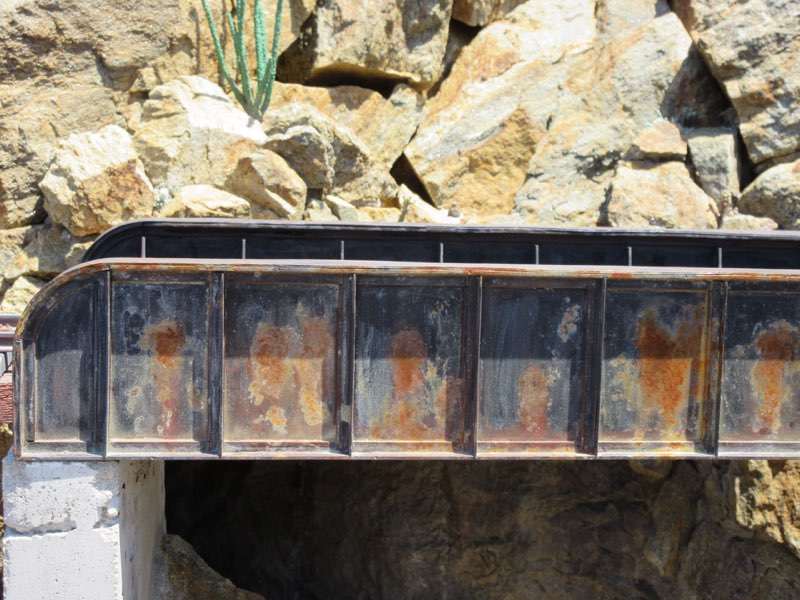 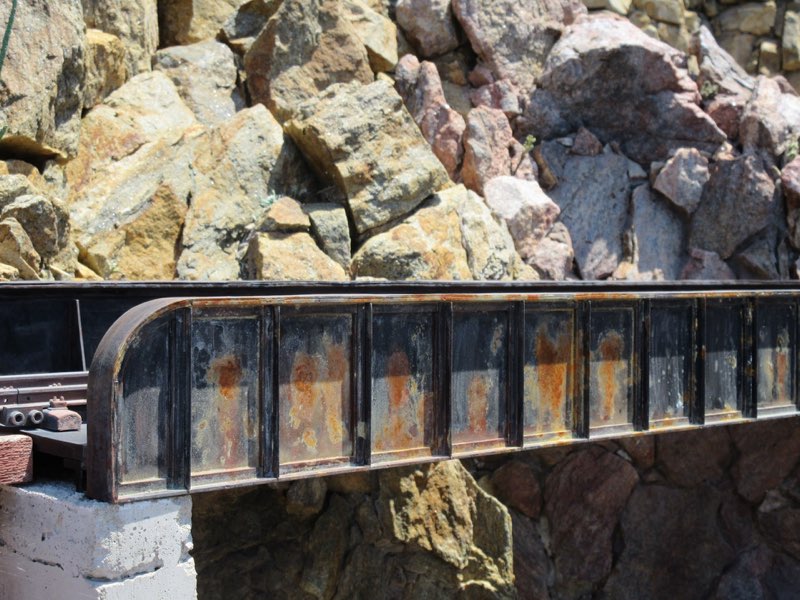 Two of my earliest structures on the layout were really starting to show their age. The paint was faded and worn (beyond the intentional weathering). The clear plastic used in some of the windows had yellowed, fogged, and warped. Slide cover glass used in a few places had broken or fallen out. A couple signs were faded, and both structures had minor damage caused by a raccoon. One of the buildings still had incandescent “grain of rice” bulbs, which I wanted to replace with LEDs. Here are the “before” photos: 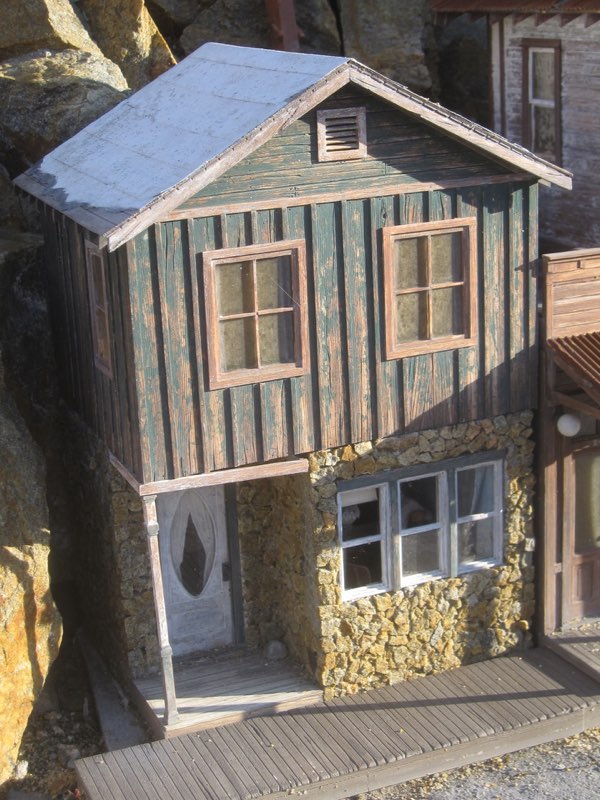 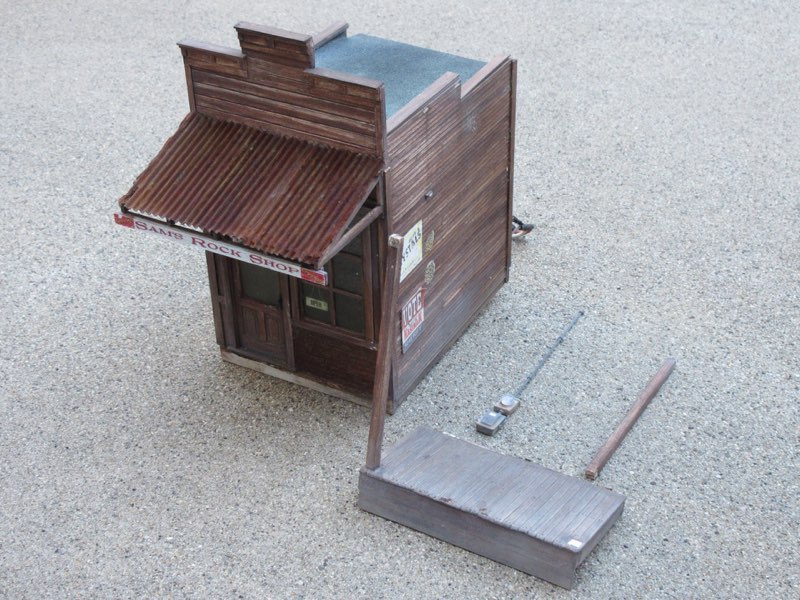 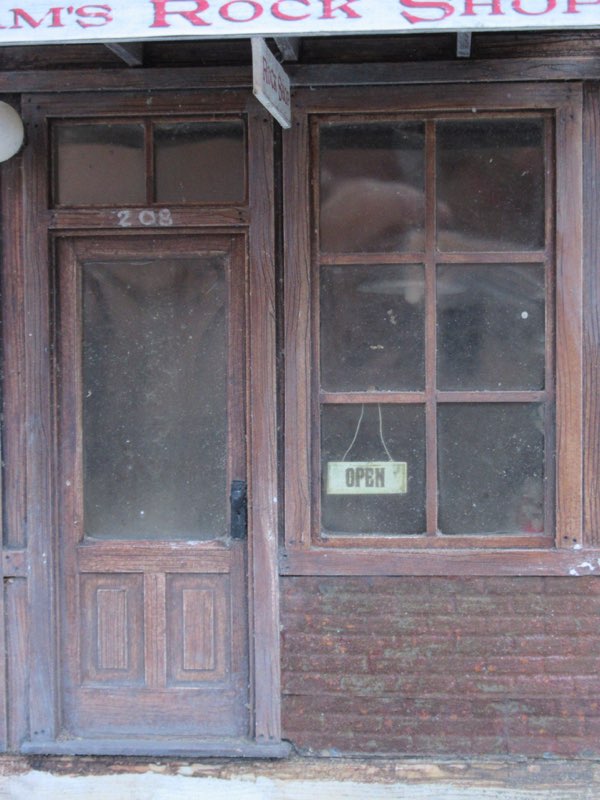 Here are the “after” photos: 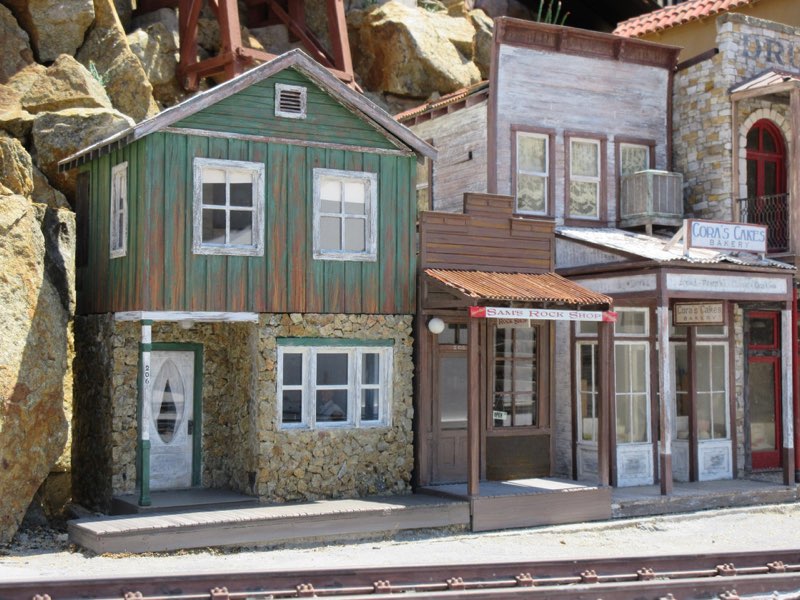 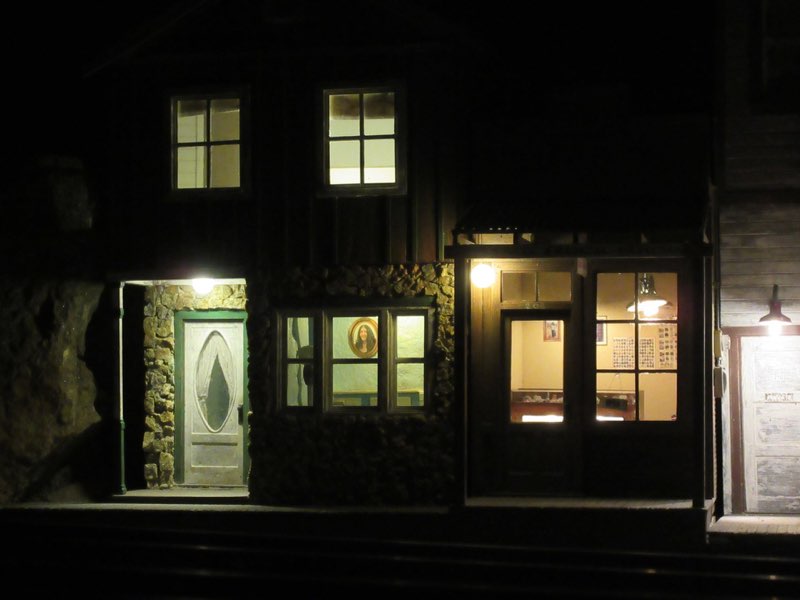 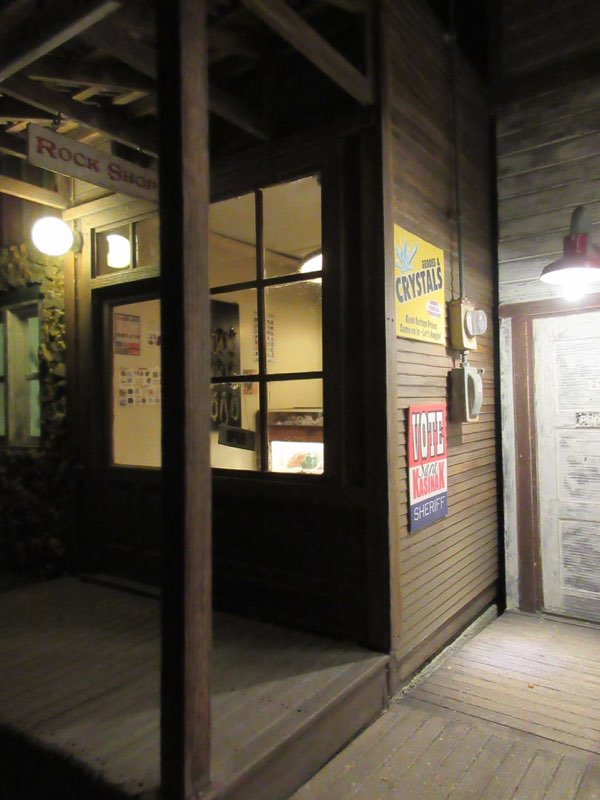 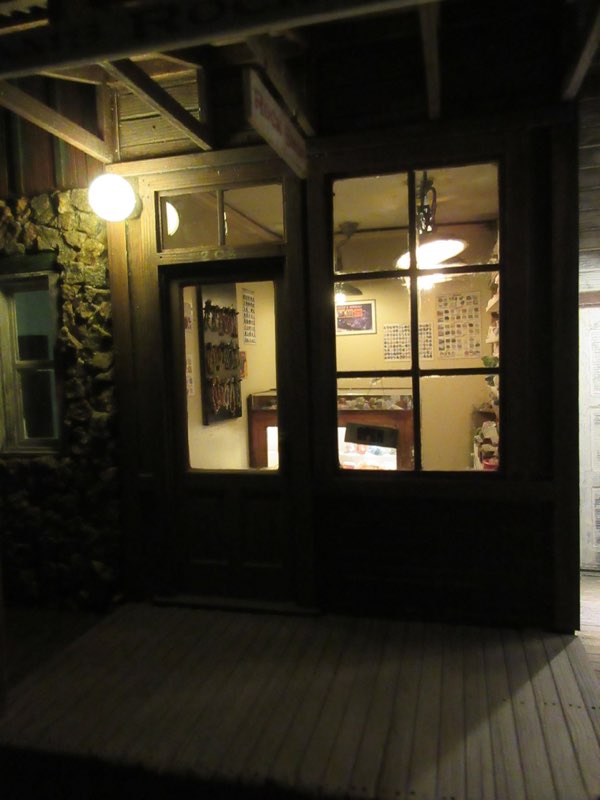 Ray, I really did enjoy. When I study your structures i am always amazed at the realism that you put into each detail. Such great craftsmanship and artistry. Thank you for sharing the photos and spending the time to explain your methods. Always a pleasure.

Duplicate post. Must be an echo on this board.

It’s about time you got back to work, you laggard! Aside from that, your stuff looks great. In fact, the “before look” was OK by me. It was “patina,” which is all the rage in collector car circles.

It’s hard to tell from the photos, but the paint was worn so thin in places that the styrene was showing through. But the biggest issue was the plastic in the windows. The warping looked terrible, and it was so discolored and dark that you could barely see anything through them even at night with the lights on.

But the biggest issue was the plastic in the windows. The warping looked terrible, and it was so discolored and dark that you could barely see anything through them even at night with the lights on.

If I had such wonderful interiors I’d want my glass to be crystal clear too. The night pics blow me away!!!

Nice work, Ray! So the weathered buildings had become naturally over weathered? And they were outside in a real natural environment? The nerve of Mother Nature.

Your buildings are terrific and the bridge though new looks like it has been in place for decades.

Recently I’ve been working on a new building for the town of Mineral Ridge. This will be a saloon called “The Grizzly Bar”. That’s a double pun – not only does it pun “bar” with “bear”, but also there is a piece of mining equipment called a “grizzly” consisting of a series of thick metal bars used to separate oversized rocks from the rest of the ore.

Anyway, this saloon has to fit an odd-shaped space underneath a mine tram bridge. There will be a small covered porch or patio area attached to the main building. I’m not going to post a step-by-step at this time because I plan to use this build in a magazine article. But for now I will post a few in-progress pics: 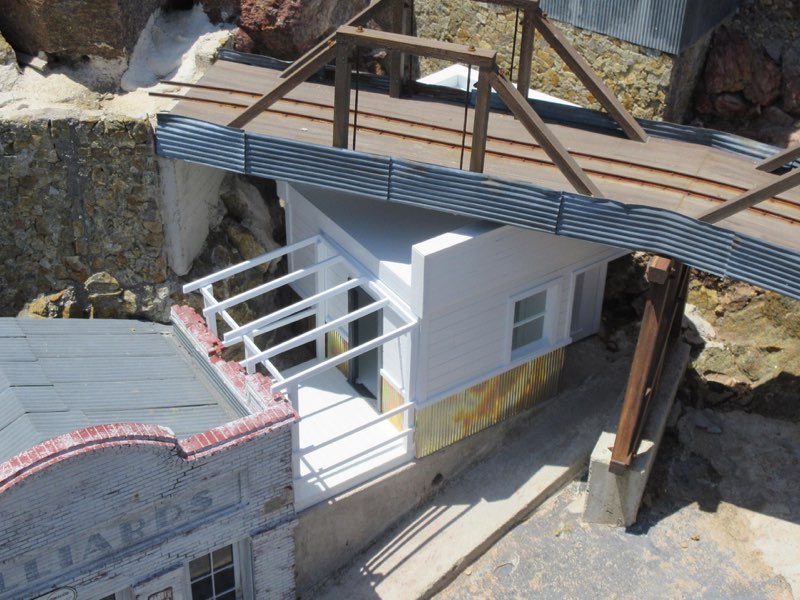 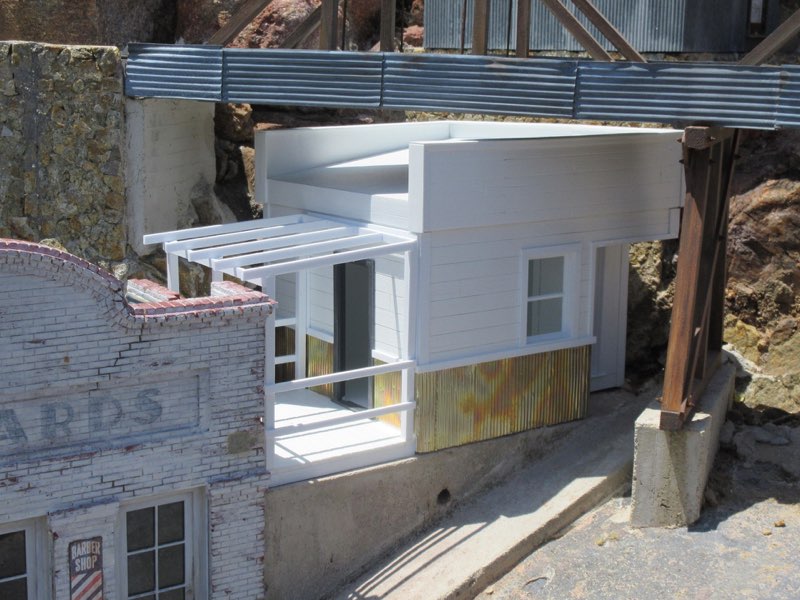 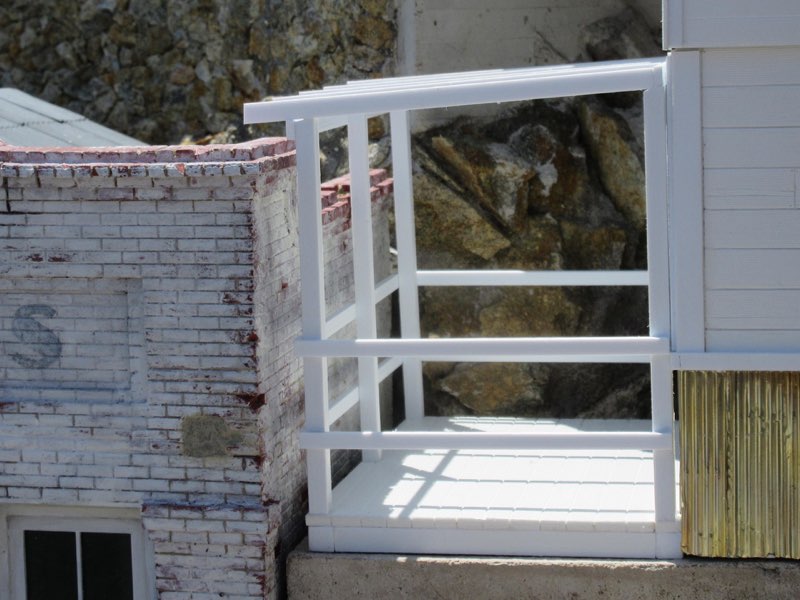 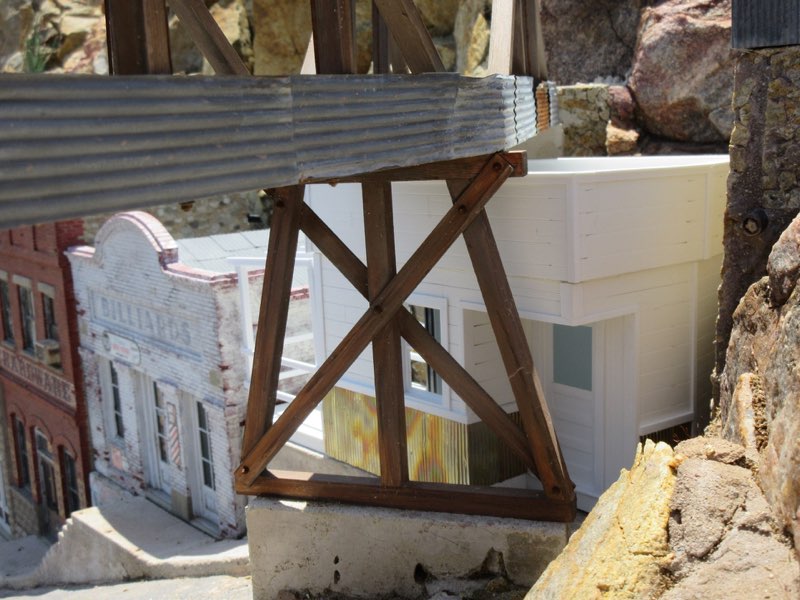 PS – On Thursday I’m leaving for my annual Nevada/Mojave ghost town trip, so I’ll be offline for a while.

I just finished reading your Modeling with Sintra Part 3 in my new GR magazine. Thanks for sharing these articles.

Just like real life, shoehorn a building into the available space.

I also love your work.

Print is still where it’s at, Ray. I know the internets offers immediacy and lots of space, but it doesn’t have the permanence of print, at least to me. Sure, I can go back on your site or this one and find things you’ve posted, but to me a magazine means you’ve passed muster–meaning some editor who has editorial skills (among others) has deemed your work worthy of public exposure.

But what I love about magazines is that I can dig through back issues of my favorites and find articles I may have missed or forgotten about. For example, plowing through an old Gazette I came across an article on making roads (for an indoor layout, but you might be able to use the technique outdoors) using lightweight spackle. What a find. I also enjoyed seeing your three-part series on Sintra-modeling in GR. I even copied them so I can reference them without having to find the issue in which they appeared. BTW, I look forward to seeing/reading about your latest build in?? GR, I assume?

Now get to work!

I hear ya, Joe! I like print too. However, this one will be in Model Railroad Hobbyist, which is digital only.

Well, then I’ll check that out. I have an open mind. Kinda like a sieve.(http://largescalecentral.com/externals/tinymce/plugins/emoticons/img/smiley-laughing.gif)

I think I already know the answer, because it is Ray I am asking, but the refurbished green building, are those real stones meticulouslyplaced one at a time? Awesome work as usual Ray. love the bridge work… even without rivets

That is correct, Pete. I have a step-by-step of the construction here: