Trestle Design & Construction on the V&T

I’m working on a design for a curved trestle, which I’ll report on if I ever start making actual progress. I say it that way because the design effort began 9 years ago… and I need to replace the temporary plywood bridge in the next year or so.

Guard rails: I’ve read that they were used on early bridges, but that fell out of practice since they didn’t really keep derailed rolling stock from falling off the bridge. So from the proto point of view, I’m inclined to not worry about them on this particular trestle. Question: have any of you found that they ARE helpful in preventing our scale trains from falling off?

Spikes: I’m planning on spiking the rail to the timbers, and not using plastic track ties hidden to do the actual holding work. But I don’t want the spikes to rust out. Question: are there stainless spikes? Can’t find any. Or other methods…?

Guard rails = additional rail laid parallel to running rail to help keep derailed cars from going off the bridge an potentially damaging the bridge itself, which could get very expensive.
Hand rails = railing in place for pedestrian traffic

Spikes = yes they make stainless spikes, at the same time user tout the merits of the additional grip the rust forms which helps keep the spike from working out
Hope this helps JMHO YMMV

Steel spikes take a long time to rust out. I’ve had some outside for more than 15 years before I pulled them out and reused them. Stainless spikes are available, but you will probably get spike heads popping up after a few freeze/thaw cycles.

Guard rails typically keep the bridge damage light as Dave pointed out. You can always add guard rails later with ease. Generally guard rails are lighter rail than the main tracks. So if you use 332, plan on using 250 for guard rails, or 250/215.

How high is your bridge? If they don’t derail now, why are you worried about them falling later?

Yes, just rail guard rails Dave. Have you heard that they do the jobs you mentioned in prototype land? And, do they work in preventing fall-downs in our model realm?

I’ve heard that opinion about the rust, and I don’t know any better. However, rust seems an indeterminate kind of “glue”… and the degradation of the steel in the spike leads to just that. Is it a significant degradation? Not enough to worry about? And is the “bond” of the rust between spike and wood lasting, or is the wood degraded as well?

Do you recall where you’ve seen stainless spikes? I’m picturing those CA’d or epoxied into the wood. But I have little experience in this, so I’m all ears.

Thanks for the further info Craig. Popping out of stainless spikes… you’ve actually heard about that happening? Just want to be sure of the facts.

Good point about the lighter rail. Part of this problem is that I can’t find any stainless or even aluminum rail lengths, and I don’t want brass. I could probably find some 250 though.

This trestle is just in the design phase. The current bridge is plywood, with flex track. Not one derailment ever. So, good point, duh…

At typical slow speeds a ScaleMPH of 5 maybe 10 they will help in some cases. But remember our oversize flanges do not allow the wheel to fully set into the gap and real roads rarely have boulders wedged in the gap. But they do look good in place.

OOPS: I would opine that I would not trust them to prevent a falldown in most cases. Trust the rust and we’ll show you at Ken’s 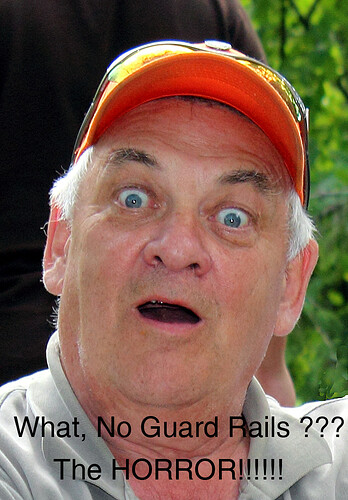 Personally, I don’t use them, but only because I’m lazy.

I also use steel spikes because I believe the Stainless theory.

For bridge timbers I have used both PVC board cut to scale tie size and painted, and Cedar stained with a Linseed oil mix. The PVC has been out longer, but the paint faded rapidly. The wood with stain is weathering nicely and color still looks good.

Yes Cliff I’ve had spikes pop out. When made my first order of spikes years ago I accidentally ordered stainless steel ones instead of steel. Even here in the mild PNW I had popping spikes after the first freeze/thaw cycle. I tapped them back down thinking it was the wood swelling.

Ran out of spikes and discovered het this hand laying thing isn’t so bad after all and ordered 10,000 spikes. These only came in steel. Never have had any pop up. Had plenty rust and even be reused a 2nd or 3rd time.

Llagas Creek sells 250 aluminum, brass and 215 nickel silver? They used to sell 215 aluminum but it never really sold so they stopped getting it. Llagas will even cut it in chunks if you need shorter sections and save on shipping.

If you want, I’ll go find some old track sections that have rusted and get some pics. Some of my track is as still the original spikes and ties that I cut 15+ years ago. Cedar ties.

Have not seen stainless spikes in a while. i think this goes back to Stretch in Oregon i believe. i use code 250 alum as running and Llagas code 215 for outside guard rails to RGS practice. i find sometimes after a hot day i need to reset a few spikes. not sure how long a bridge you are talking about but my big one is over 20" long. it is not a big maintenance headache IMHO.

One thing I will mention ( my pet peeve) please don’t radius your stringer timbers. Make them go strait from bent to bent.

As for Stainless spikes, my 2 cents worth is don’t use them.
Here is a link to something you might want to take a peek at.

Hi all, We had an Oak tree die last year and it needed to be taken down. Now in the not too distant past I would have fell it and never looked back. Enter the wife and her practicality; the tree is over the propane tank, it is leaning towards the house, you’re an old fart now. Wow didn’t need that last one. So in the end we thought it would be a good idea to have a tree service come in to remove it. The tank loop trackage was still in place so I thought it would be a good idea to salvage it bef…

One last thought. On a lot of my bridges I built them with every other tie of wood and extended to hold the walkways then I removed every other tie from a section of flex track and it just drops in and stays perfect. Also it is easy to pull out each year when I oil the wood structure…

Here’s some spikes and cedar ties that are 17 years old. Can you tell which spike is the stainless and which one is the steel? 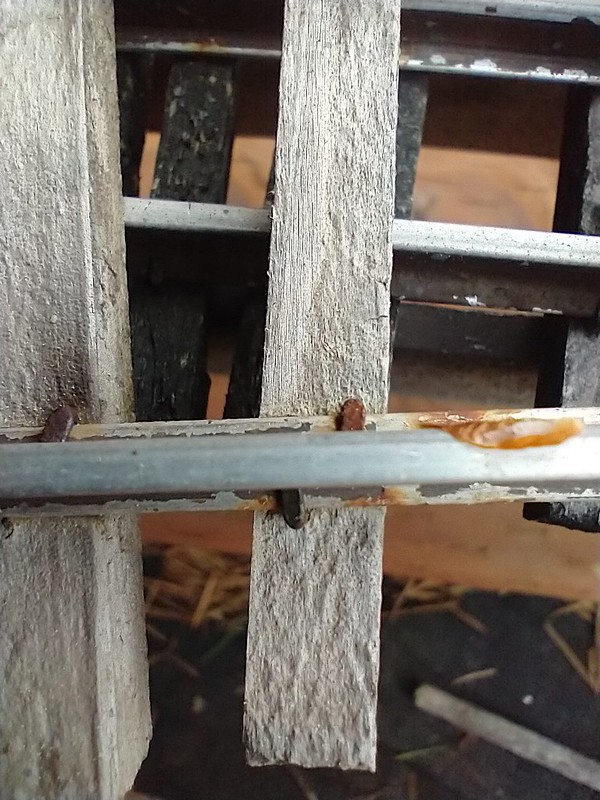 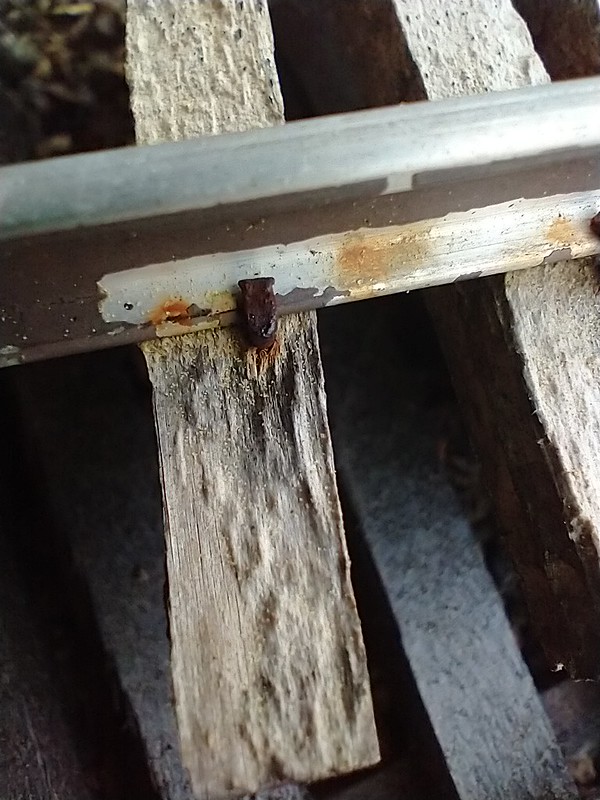 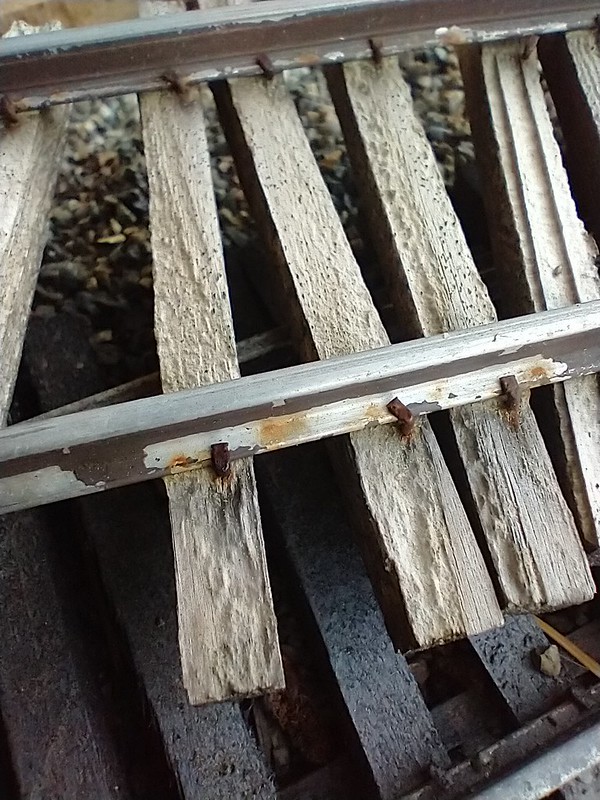 Let me get this straight. Cliff is going to build something out of wood and “not” print it ? Who is this guy … 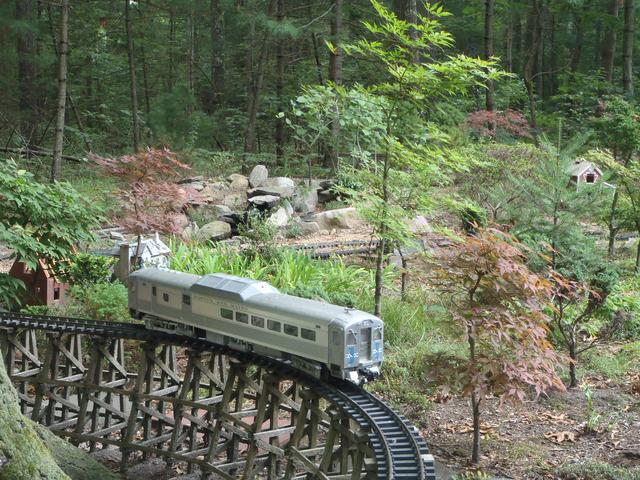 For me, stainless spikes started popping up maybe after the first couple of years of track outside, then it becomes a yearly nightmare of maintenance.

Also, don’t forget that bridge ties are not just longer, but are a different shape, and spaced much closer than regular ties.

Cliff
If you need some drawings I have some trestle drawings that show various timber sizes.

Wow, where do I start? Thanks for all the replies guys, and the pointers & tips & opinions.

OK: no SS spikes! And as Hollywood says, next weekend will be a great opportunity to closely examine how Ken’s steel spikes have held up.

Thanks the offer Craig, but all my bents are so constrained that I’ll need to make my own jigs. Thanks for those pics! I suspect the “stainless steel” had a very high carbon content to rust that badly. But very informative.

Speaking of which Sean, this is my second wooden trestle… yeah, a shocker…

And you bet Bob, dense ties, extra wide, with a walkway on either side.

About the guard rails, since this isn’t a model of a prototype, and seeing there’s no great reason to put them in, I’ll bag those. The two following trestles will be of proto V&T trestles, so I’ll follow their practice for those.

The design is almost done, and I’ll post pics soon. Do to the site conditions, it’ll strike some of you as very strange… but it’s in the “back stage” area of the layout, and it’ll look a lot better than the plywood ribbon it’s replacing. 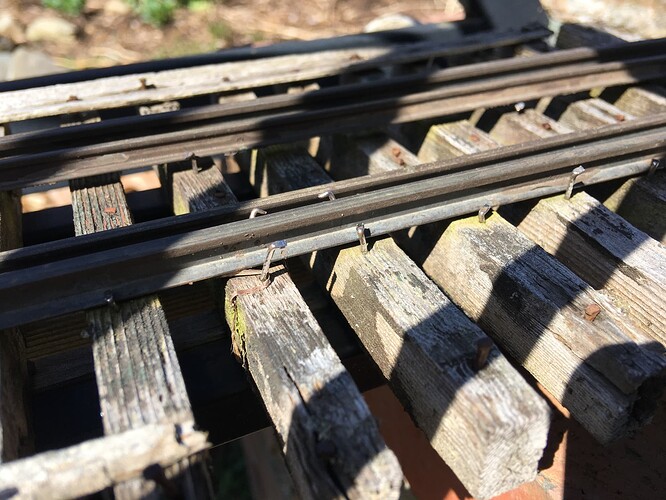 Yep - looks VERY familiar.
EVERY Spring it was get outside and re-tamp ALL of the spikes. Yuck.

spikes and cedar ties that are 17 years old

I can confirm that steel is preferable. I used steel and it rusted - when I came to take the track up when we moved to a new home the heads pulled off before the spikes came out of the wood!

I’m almost getting the impression this issue grants bragging rights to outdoor railroaders over indoor. Like, when insanely jealous of their climate control, but finally hitting on the topic of track spiking: “Well yeah, unlike your situation, mother nature welds MY spikes to MY ties. Sorry about YOUR issues.”