We just returned from a delayed 50th Anniversary trip to southern Africa, and as trains were involved I figured I would post the pics here for your entertainment.

After wandering around looking at wild animals (which look just the same as in the books and documentaries,) we got to Victoria Falls, where the railway & road bridge crosses the canyon just below the falls. This view is from the back lawn of the Victoria Falls Hotel. The clouds are the spray from the Falls. 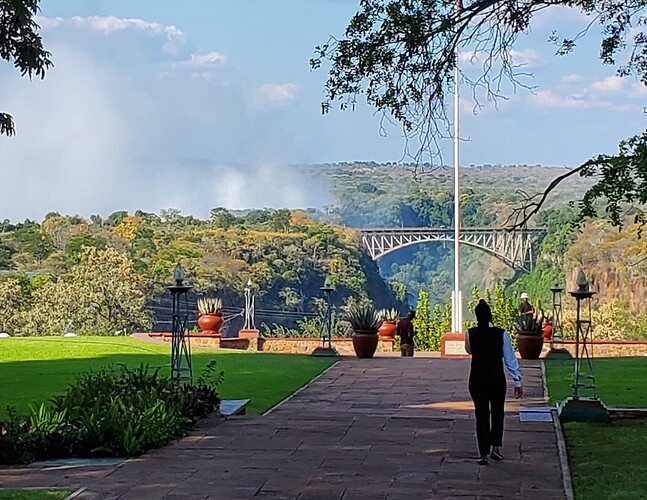 The hotel is on the site of the railway workers barracks, in Zimbabwe (Rhodesia in colonial times.) The plan was to build from Cape Town to Cairo - they got to Dar Es Salaam, which is about 1,000 miles short, but still 5,000 miles from Cape Town.

First order of business was a cocktail trip on the railway from Livingstone, Zambia, to the bridge. The company, Bushtracks, had a compound with a few dead steam locos. 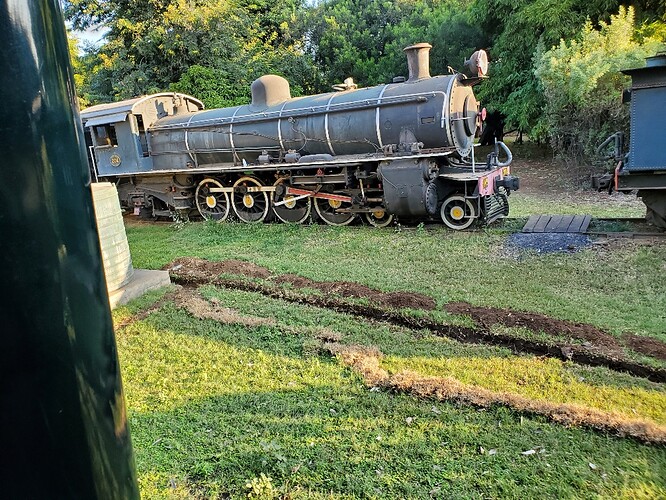 The track is ‘cape gauge’ or 3’ 6". so pretty much the same as our narrow gauge RRs. We came out of the compound and backed down the ‘mainline’ to the bridge - this is from the observation car at the rear. 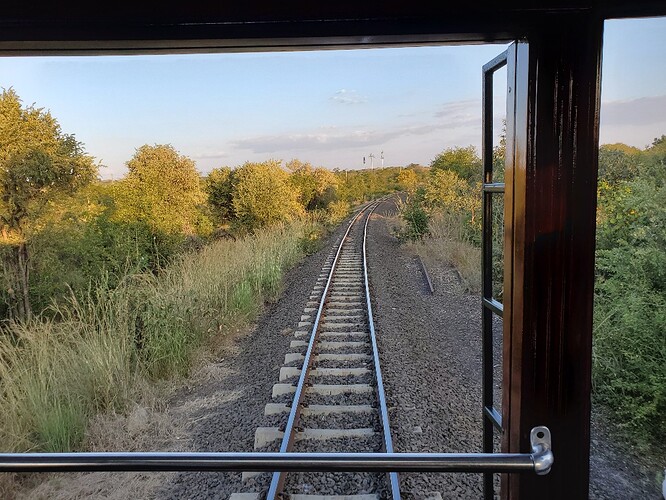 When we stopped on the bridge, we were told the engine crew was quite friendly; imagine my surprise when I discovered we had a 2-6-2+2-6-2 Garrett working the train! 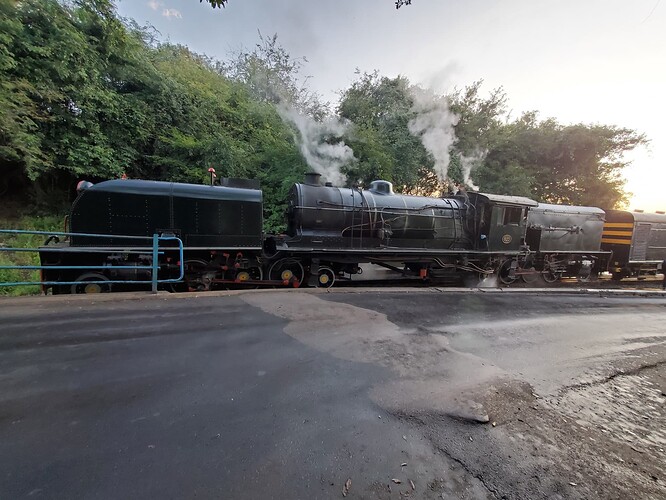 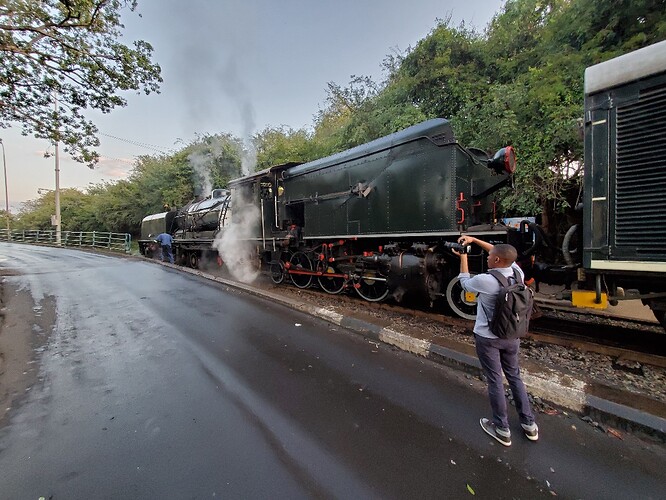 It was tough to get far enough away from the beast to take a decent photo, but I did get to climb in the cab. The fireman offered to show me the fire, but I declined - it was hot enough onboard. 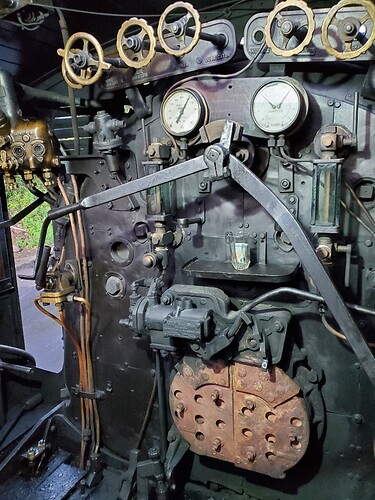 The crew invited anyone up to blow the whistle, so my wife and her buddies all had a go. 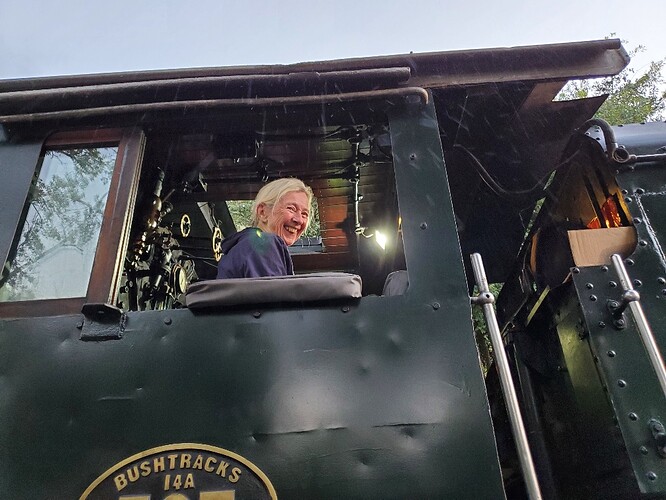 The following day we wandered along the road to the station, which was just behind the hotel, as I’d seen a few relics. There was another Garrett of the same class, which according to the websites was running a few years ago. I guess it is waiting for a new boiler. 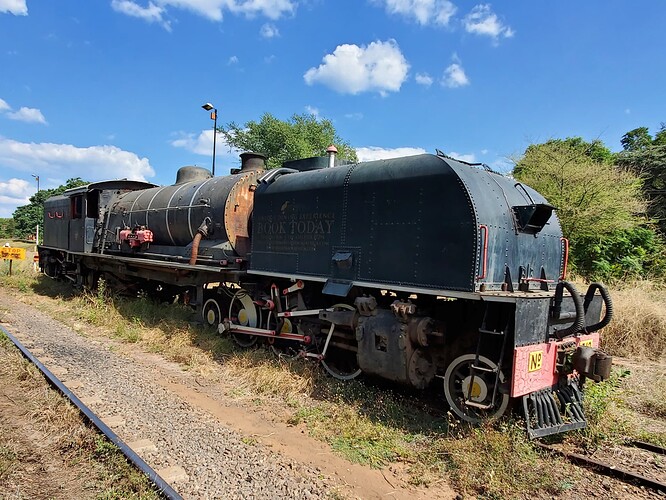 Also in the station was/is a little tram with a small diesel for power, which can run down to the bridge from the Zimbabwe side. 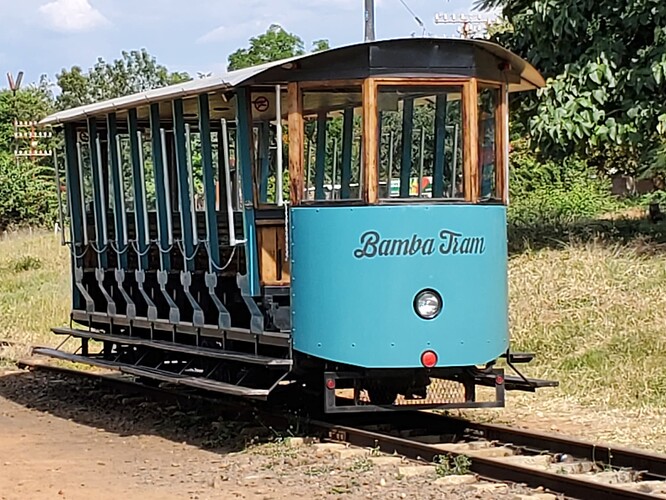 In the Hotel courtyard is the original tram, powered by a couple of porters. It was used on a 2’ lightweight line to take guests down the the Falls. 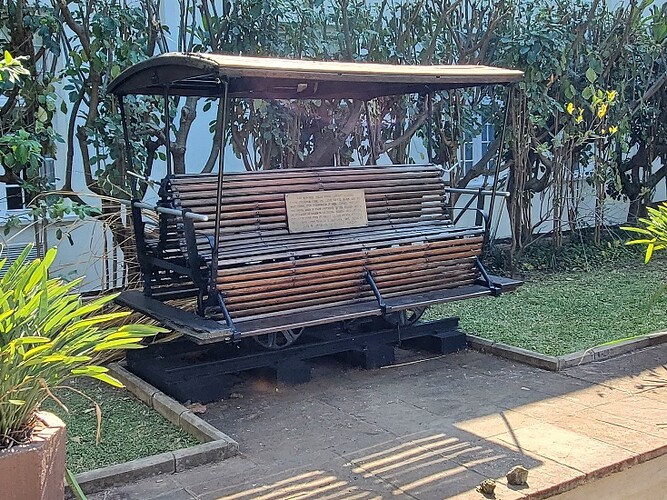 (The bridge at the Falls is actually the border between Zambia and Zimbabwe, so we were in no-man’s-land when we stopped on it. Some years ago, Rovos Rail ran the train and it went from the Hotel to Livingstone. Now, apparently, the border is much more difficult and they sold the train to the local operator.)

The following day our Rovos Rail train arrived, to take us back to South Africa. 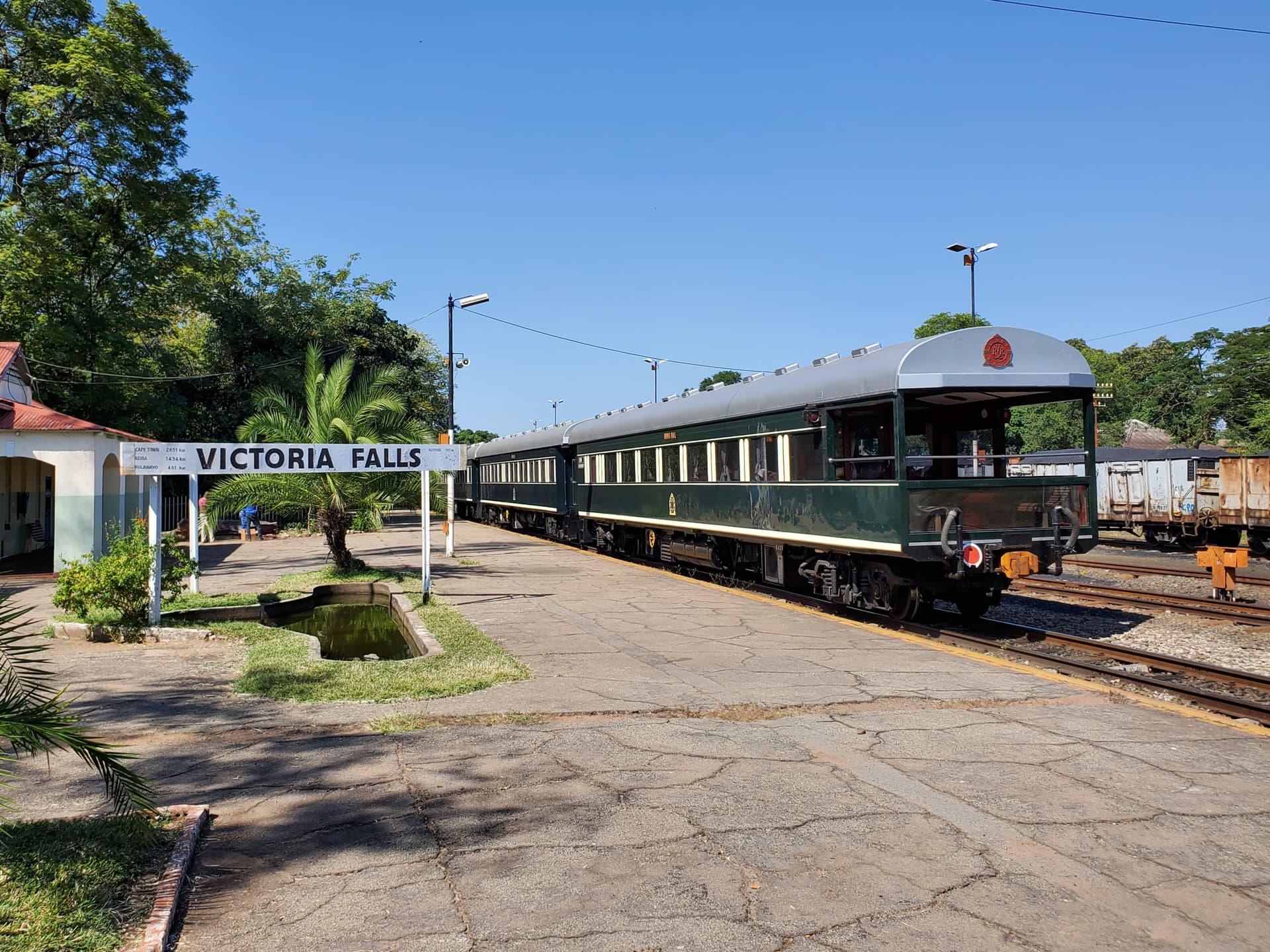 The coaches are mostly ex-Rhodesia Rail bought for scrap and totally refurbished in classic RR style. Here’s the interior of the Observation car shown above: 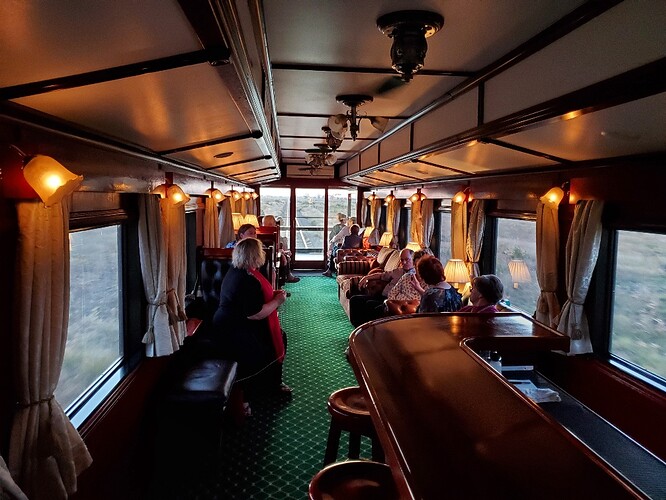 One of the dining cars with mahogany columns, etc. 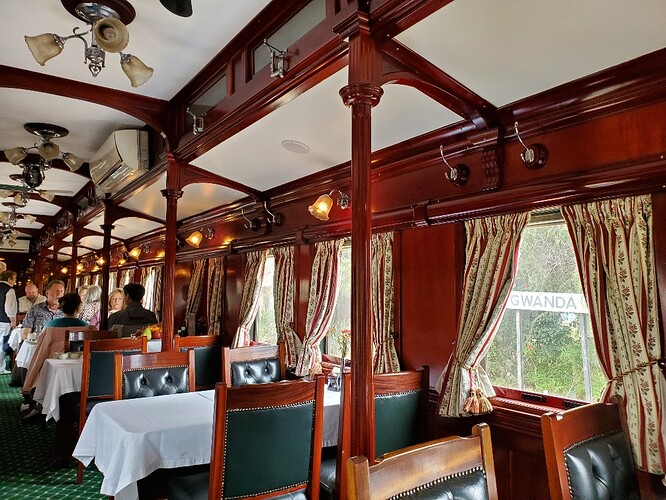 Our ‘cabin’ was also finished in gleaming mahogany. (There were only 3 cabins in a coach in the class we were in.) 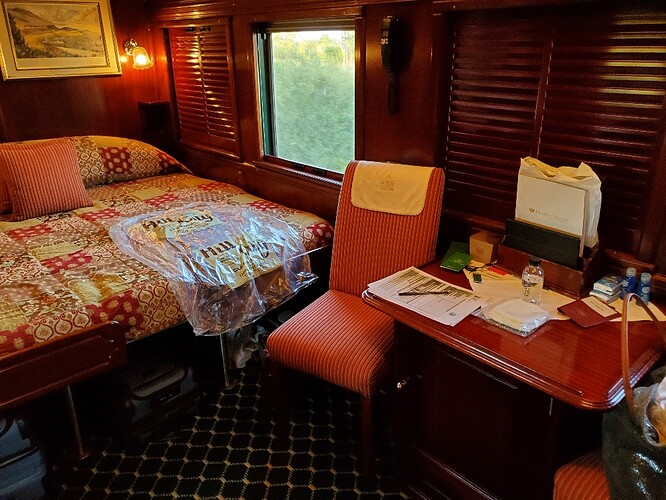 We had room for the decent-size bed - although it stretched across the coach; narrow gauge, remember. We also had the table and chairs, plus a bathroom with a shower.
There was a premium class with only 2 cabins per coach (and a claw-foot bath in the bathroom - really?) The final type squeezed 4 cabins in a coach.

We set off across Zimbabwe, where the track is straight [the builders obviously didn’t stop to ask who owned the land,] including one section that is 114 km. (This photo is a later section - I didn’t even notice the long one.) 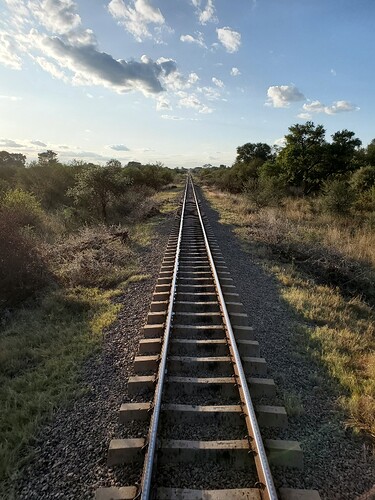 When we got to Gwanda, I got a chance to get off and check what was up front. 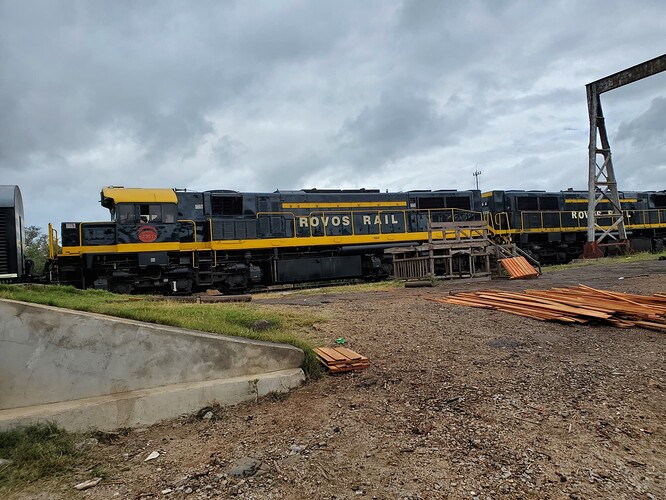 Then at Beitbridge, the Zimbabwe side of the border, we were encouraged to look at and inside the locos, as they were about to be removed. TRANSNET (South African Railways) won’t allow Rovos to run their own engines, so Transnet pulled our train across the border to Musina and our pair went off to be serviced. 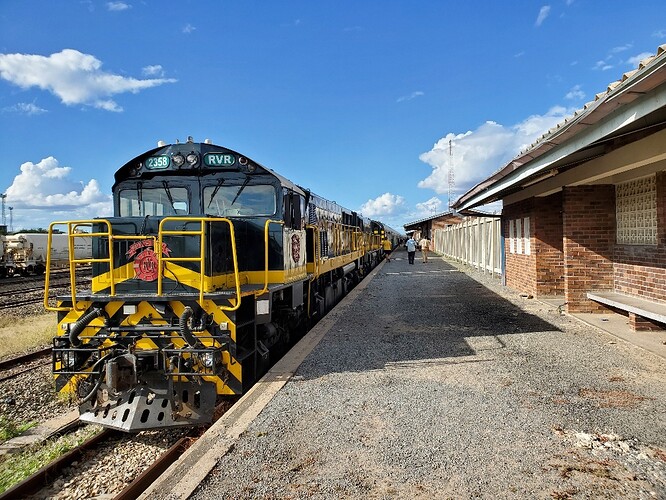 They appear to be very similar to the old WP&Y diesels. Apparently bought from Australia, where they’d been delivered CKD (completely knocked down) from various sources, I think the engineer said they were GM diesels.
https://www.stjamesguesthouses.com/wp-content/uploads/2016/12/RVR-TRIBUNE-2015-LR.pdf

After the border crossing, we stopped at Polokwane, the capital of Limpopo Province. We had quite a delay as the Transnet engine had to be replaced, which took a few hours. 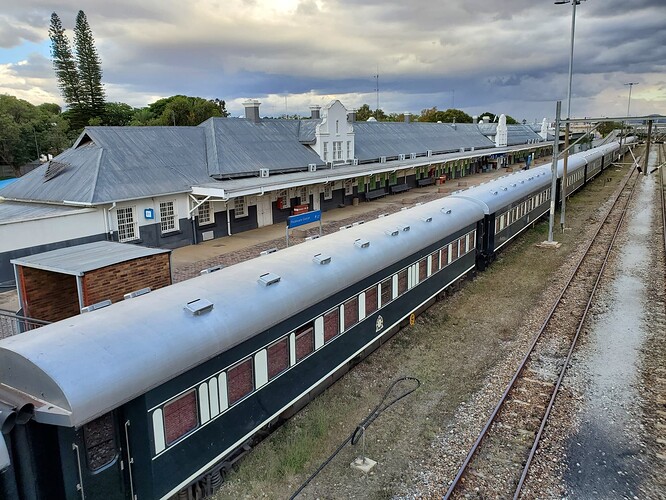 (Interesting that the station looked quite well appointed, although a lot of the S.A.R. (South African Railways) was derelict. You can almost see the electrification poles on the right - unfortunately the locals steal the wires and sell it, so S.A.R. has virtually given up on electrics!)

Our train was 17 coaches, and a maximum of 21 is worked. We had a generator car, staff car, 2 lounges (including the Observation,) a kitchen car, plus 2 dining cars which is 7 of them. The rest were sleepers.

We wandered over the pedestrian bridge, and on the way down I noticed there was a hidden bay platform with a pair of boxcars. You could hardly see them from the main platform. 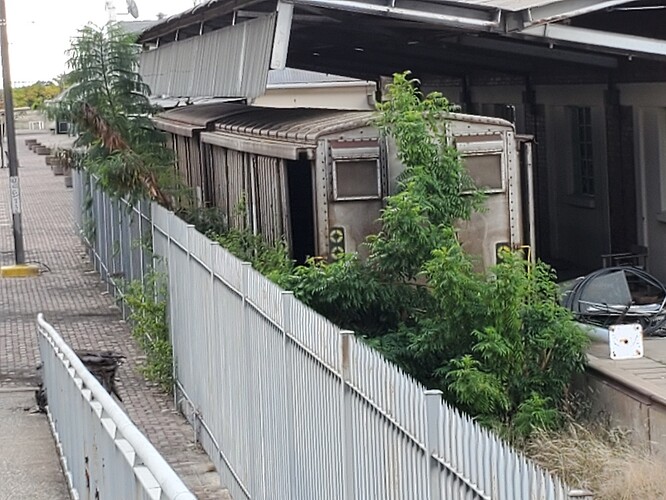 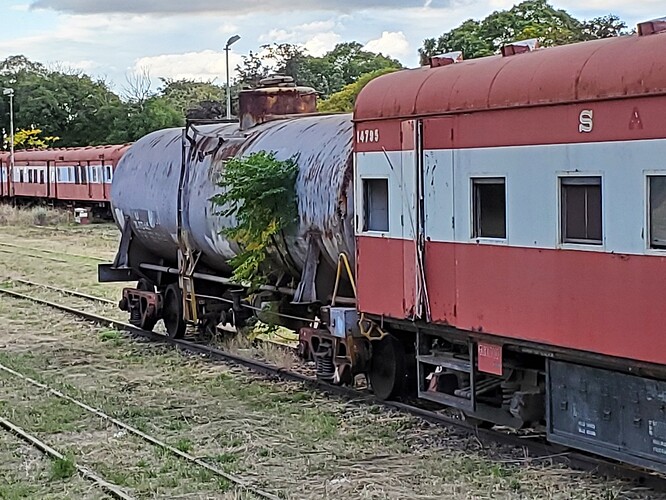 Just outside the station was a Hawthorn-Leslie 0-6-0 that was made in the UK a long time ago. 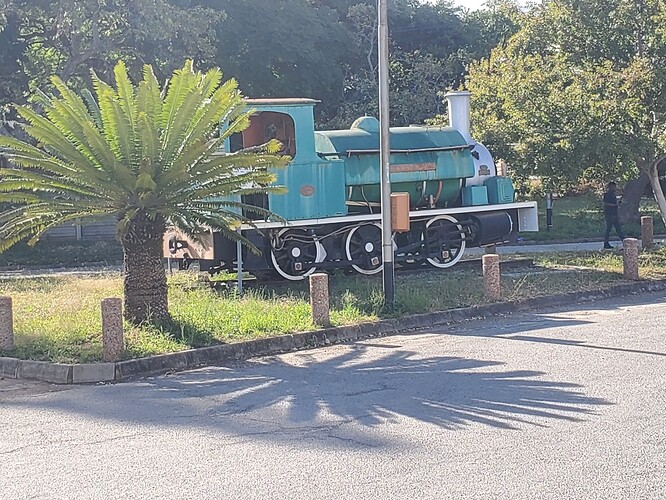 We finally got moving and arrived in the Rovos Rail depot in Pretoria. 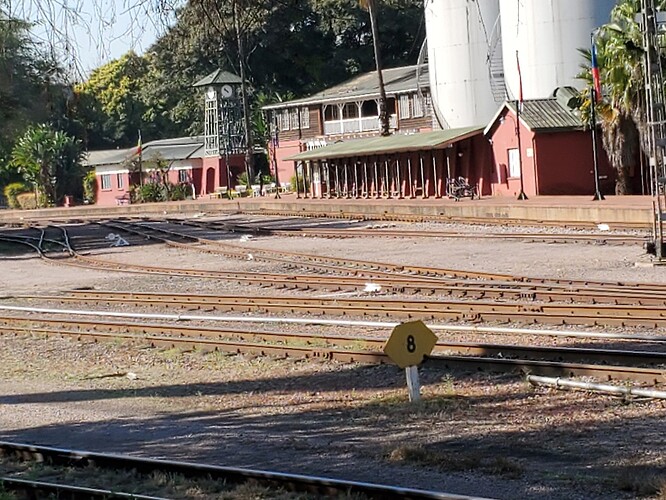 When we finally pulled in (they parked us in the yard for a few hours, as we arrived at 6am and we weren’t due until 10am,) the owner and founder, Rohan Vos, was there to personally meet and greet the passengers. You can only imagine the problems of running a railway in a pandemic with no passengers.

He then escorted us for the shop tour, and gave us the history. In this pic he is in front of the 1895 4-6-0 that is being restored. Very nice guy. 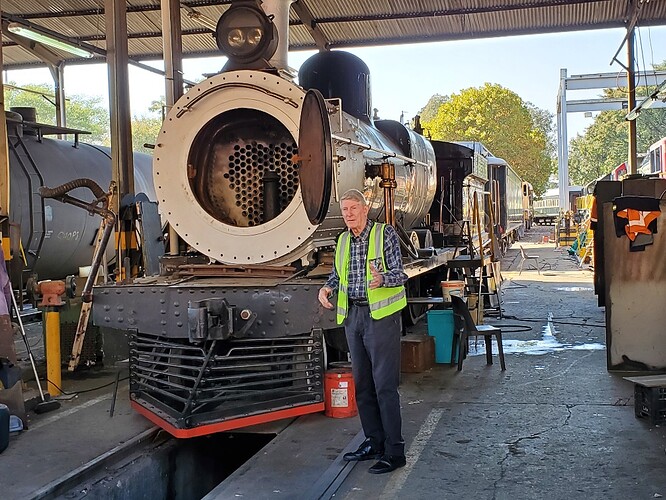 And after that it was off to J’burg for our flight home.

In conclusion, 4 days on the train was a bit much. We had 2 off-train excursions to see wildlife, but the scenery was quite flat scrubland for most of Zimbabwe. But they do the trip in 3 days, so I reccommend that option.

Did you take the little tram, and how close does it get to the Falls?

The Garrett and interior shots are wonderful. A trip of a lifetime I imagine.

Thanks for the great coverage,
Cliff

Did you take the little tram, and how close does it get to the Falls?

Hi Cliff, no we didn’t take the Bamba Tram. It was advertised as going to the Falls, but that track just leads to the bridge, and then on to Livingstone & Zambia. No time for side trips.

thank you for sharing these interesting and uncommon pics!

Looks like a great trip, Pete. Beautiful photos. Glad you got home safely and thanks for sharing.

Thank you very much for sharing.
Do you know if someone has drawings of this equipment?
Or do you have shots that could be scaled from?

drawings of this equipment?

Hi. I’m not sure which equipment you are referring to? The Garrett loco? The Rovos diesels? Or the whole train of coaches?

The steam locomotives for starters,
But depending on what the equipment details are they might be kitbashed?
Since it should be LGB proportions there is a lot of equipment available

boy, those Garrett locomotives are some really odd ducks. Someone really had some fun stuff to dream up that double articulated thing

The steam locomotives for starters,

There are plenty of online sources for drawings. I just googled “garrett locomotive drawings”.

They were very common in Australia as well as Africa, where their characteristics suited the terrain. Note on corners the boiler is inside the curve, and also that the boiler is not constrained by the chassis so it can be more efficient.

There’s a thread with photos of my Garrett, which is just the 2 chassis from a 2085D Mallet.
https://largescalecentral.com/t/locomotive-haul-modded-lgb/80944?page=2 The coaches are typical S.A.R. or Rhodesia Railways types, though I think Rovos moved a few windows around in the kitchen cars, etc.

Thanks for sharing this adventure, Pete!

I love the clock tower the Pretoria station. Just one of the many neat details I caught. The coaches are beautiful, I love all the bright shiny mahogany.