On several occasions I’ve found raccoon tracks on my railroad, as well as raccoon poop. They sometimes even poop on the track inside a tunnel. They also knock over the freight cars parked in one tunnel.

I’ve seen raccoons taking an “asphalt nap” around the neighborhood too. But I’ve never seen a live raccoon here – until last night.

While taking my evening hike around the neighborhood, about 8:30 I saw a raccoon just a few feet away from me in someone’s front yard, and managed to get a good photo: 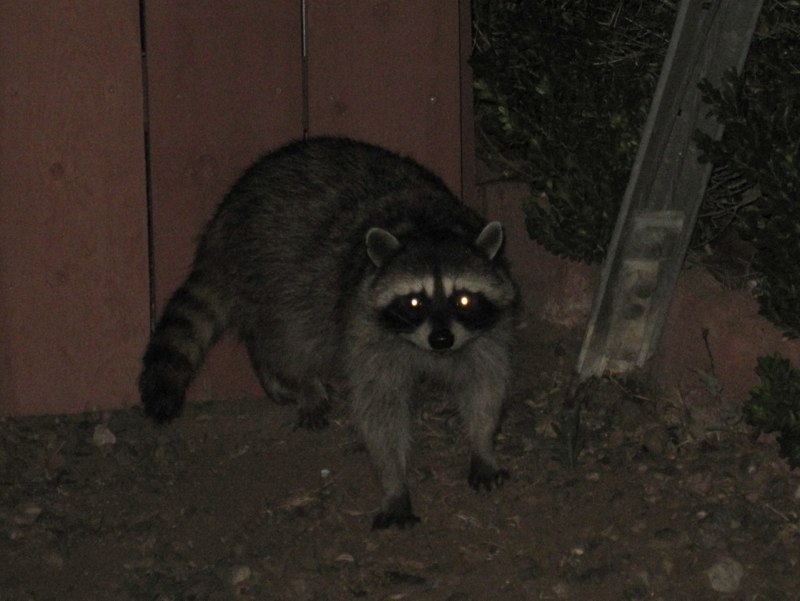 Two hours later, I was in the kitchen and heard a noise out back. I flipped on the light and there was a raccoon right on our patio, headed up the steps to the railroad! I had to go chase him out of the yard.

Been here over thirty years without seeing a live one, then see two in one night!

Gee, I saw a muddy raccoon hand print on my garbage can once, but I have never seen any around here. (http://largescalecentral.com/externals/tinymce/plugins/emoticons/img/smiley-wink.gif)They are usually pretty good at not being seen.

We had them here too! First were a couple of adults that disappeared after some time in the area.

The following spring, we had four little pups hanging in a berry tree next door, eating it all until it was empty. I actually missed seeing those little guys around. Almost a year passed and one night our outside motion kicked on. I looked out to see two large raccoons walking around the tracks. I guess they grew up and showed me they were still around. I haven’t see them again.

I miss having the wildlife around the yard like the rabbits, foxes, etc. It seems like the rest still come in. The fence doesn’t stop all of them. As long as they don’t eat my track, all is well! I guess I’m an animal lover too? Wait, is he eating my rails???

Is that a chipmunk?

Ray, that does seem strange to see 2 raccoon in one night. I haven’t seen any around my yard, but they are in the neighborhood - you can sometimes see the ones that haven’t mastered crossing the road.

In my yard, I’ve seen rabbits and possums. The squirrels use the railroad like a racetrack, running along the rail. The birds sometimes run on the rails as well.

And, the chipmunks always seem present - this guy posed for some time, allowing me to go get my camera.

Last week, a doe gave birth in our “yard.”. I was fortunate to witness the whole thing from the porch. Especially cool to watch Bambi take his first steps.

The birds perch on my bridge and bathe in my pond. They actually line up and take turns taking baths sometimes. And the squirrels use my railroad as their personal expressway. I even watched one bat the train off the tracks so he could use the bridge to cross the pond.

Is that a chipmunk?

I have a list of animals that have gone through our yard. Let’s see, turkey, foxes, chipmunks, squirrels, raccoons, deer, cats, dogs, mice, and skunks! The last team of skunks told me it was time to fence in the yard fully. I was soaking in the hot tub when one came into the yard. I said, never again!

We used to get skunks in the yard, but I solved that by placing concrete pavers all along the base of the fence. Seems to have stopped them digging under. Occasionally we have some trouble with ground squirrels, which cause lots of problems, and rats. Both are easily dealt with, and the same way. (Rat poison)

These days the main problem critters are raccoons and possums.

Right now, I really wish there was some kind of “Pest-B-Gone” product I could use on the obnoxiously loud partiers two doors down.

It seems last night was the time for raccoon spotting. At about 8:30 PM I was running my railroad with my visiting sister and a large raccoon, about the size of a medium dog, ran by one side of the railroad. Maybe it’s a conspiracy against LSC members? I have seen raccoons in this neighborhood before, but not this large. It scared my sister pretty good.

Ray: I wonder if you spotted the same raccoon twice or two different ones. Haha.

No conspiracy Joe, I think it’s just coincidence. I’m pretty sure that all of us (except where the critters don’t live, deserts?) have these little fellas peeking through fence boards just waiting to run around our creations and swipe a few shiny objects they find on the way.

Even being 3 minutes from the point here in the Burgh, we are surrounded by woods on all four sides. We have deer, turkey. grouse, woodpeckers, fox, squirrels chipmunks and yes lots of racoons. At one point there was an abandoned house across the street from us that was infested with them. Once in a while we would wake in the middle of the night when an angry pair of them would crash out of a front window on to the houses tin front porch roof in a fit of rage fighting over something. Thankfully that house and the one next to it were taken down by the city.

We still have plenty of them around though. The first night I had a few of the sections of my new “trestle” up I found their muddy prints on it when I went out to begin work the next morning. They don’t waste time exploring. They can cause a little trouble, but they are cute and I would not consider them a physical danger to humans unless provoked. They’d rather scurry away than fight, but can be very vicious.

Edit, to ad skunk and blue heron. In fact my neighbor called in a panic the other day because she thought the heron perched on the top of a house eying the other neighbor’s gold fish pond was going to a tack her and her kids. She called it a vulture. I assured her it was only after some fish. (http://www.largescalecentral.com/externals/tinymce/plugins/emoticons/img/smiley-laughing.gif)

Yea, Raccoons are cute, and they (usually) prefer to be left alone. When cornered or defending their young, they can be really nasty critters. But for the most part, they are just trying to survive, and they don’t want to fight. 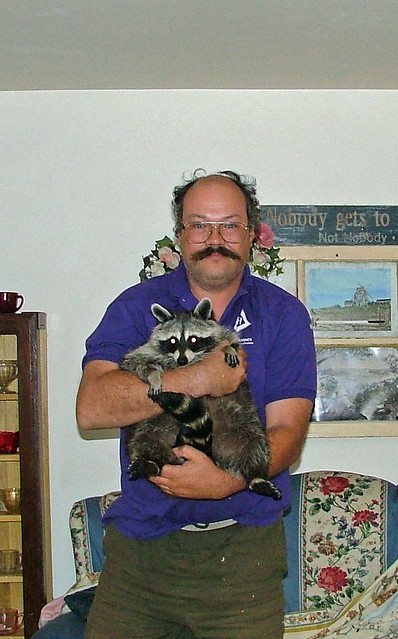 Last week, a doe gave birth in our “yard.”. I was fortunate to witness the whole thing from the porch. Especially cool to watch Bambi take his first steps.

You were most fortunate to witness that Steve.

As far as most of the critters mentioned here are concerned I have to say that they do not exist over here. Foxes and squirrels are common and deer are in the more woodland areas of Britain.

Incidentally the guy over the road from me does have a pet raccoon. He brought it over one day and it was fascinating to watch it climb vertical walls!

Apart from bird droppings and the occasional fouling from a badger/fox/mouse or whatever little issues happen to the railroad excepting for my small, but very energetic farm dog who can disrupt ballast or move a small building.

Oh Come on David! You were holding out on us! Two posts before you coughed up that fantastic gem. That’s great I’ve always wanted the opportunity to have fun with a raccoon but never have. Even though all of my friends say " oh, my so n so had a …" One day I’m sure I’ll get the chance. Your friend looked like a nice sized fellow. Thanks for posting.

That’s cool! It would be fun to be able to hold one like that.

She was my little girl. She would purr herself to sleep and boy could she snore. She passed away about 3 years ago, and some days I sure miss her. She was a lot of fun, most of the time. But during the spring, she was a tad grumpy. Instinct told her to protect her nest and boy did she some times. (http://largescalecentral.com/externals/tinymce/plugins/emoticons/img/smiley-surprised.gif)

When I lived in Northern California I had a big HO layout in my basement. I went down one night when I thought I heard a noise. There was a mother Raccoon with 2 yearling pups and 3 young ones toddling all over my layout, yanking trees up and causing all kind of chaos. I went to the far side of the layout and started making noise, and they scampered out of the basement. I spent a little time putting some stuff back in place and went up to the house. When I entered the back door into the kitchen, the same crew of Raccoons were in the kitchen strewing dog kibble all over the floor. I tried to make some noise to get them back out the doggie door, but this time mom decided to make sure her babies left first, so she stood her ground as they all went thru the door one-by-one, then she left. I went outside to see if they left the yard, and the babies were on their way up a huge pine tree, and the mom and the yearlings were on the ground under the tree. Mom refused to leave and even approached me growling to defend the pups. She kept calling to the babies to come down from the tree, and watching me, so I went inside and eventually the babies came down and they all scampered out of the yard. I’ve had Raccoons and Possums in the yard and Kitchen many times, but that was the one-and-only time they had a go at my railroad.

When I was about twelve, my neighbor found a young, perhaps foot long rattlesnake in his basement. He scooped it up with a shovel and escorted it outside. Oh, the joys of living at the edge of town.

I just saw another raccoon this evening, strolling down the middle of the street and it wasn’t even completely dark yet! When he saw me he ran off into someone’s backyard.

We’ve had Raccoons in our front yard on and off all the time we’ve been here. Possums too. Luckily there too fat to squeeze into the backyard, it’s too well fenced off. Cats are a different story, we have a cuddle of kittens currently residing in our backyard. They just showed up one day with mama who’s a mean one, bullies all the other cats who just want to play. I’m getting the kittens addicted to chasing string right now, eventually I’ll adopt them out once they are tamed and docile.