Today, the Candlewood Valley Scenic Railway ran a shake-down plow extra to test the equipment. There was just enough snow on the ground to set the scene… 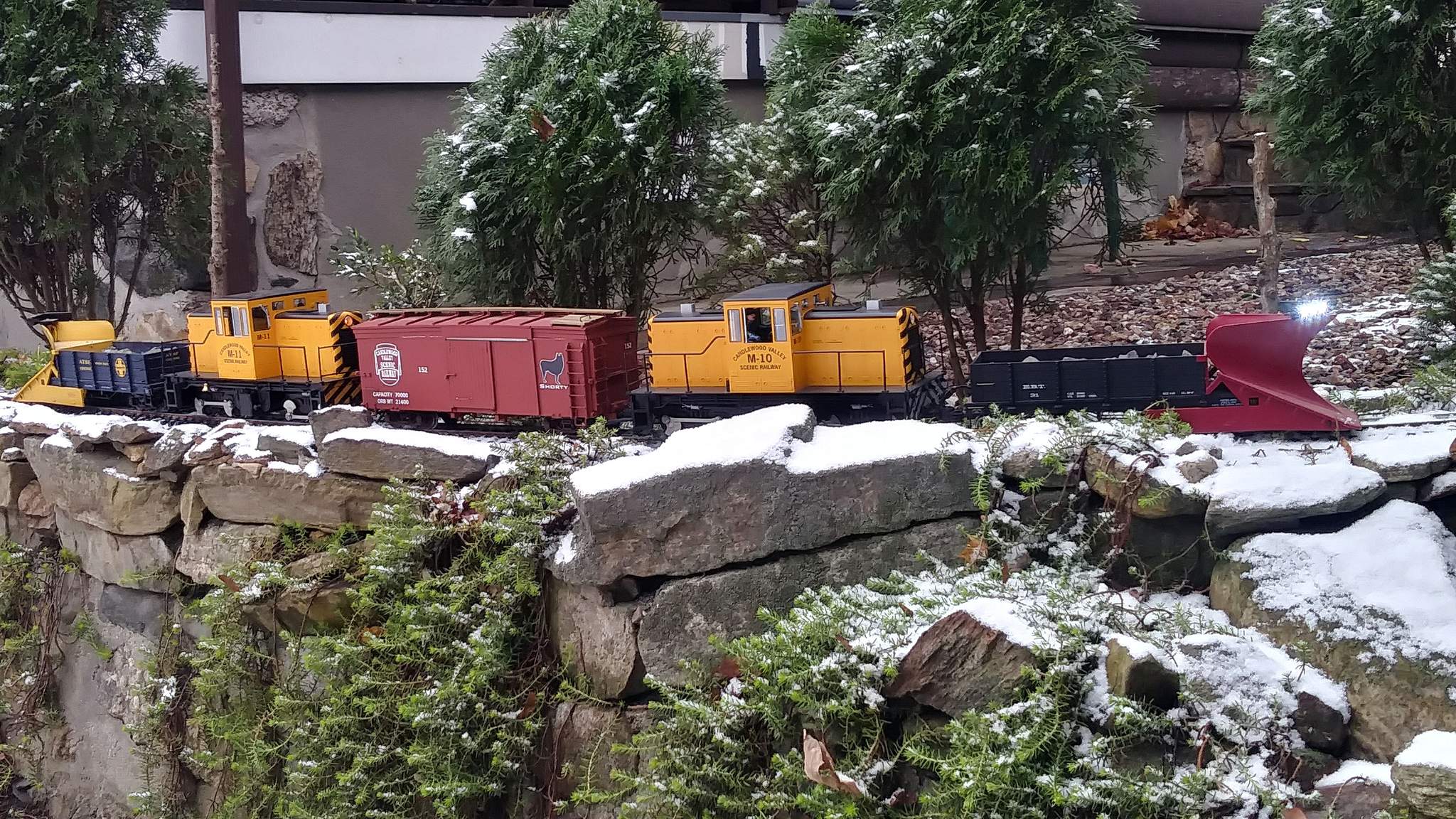 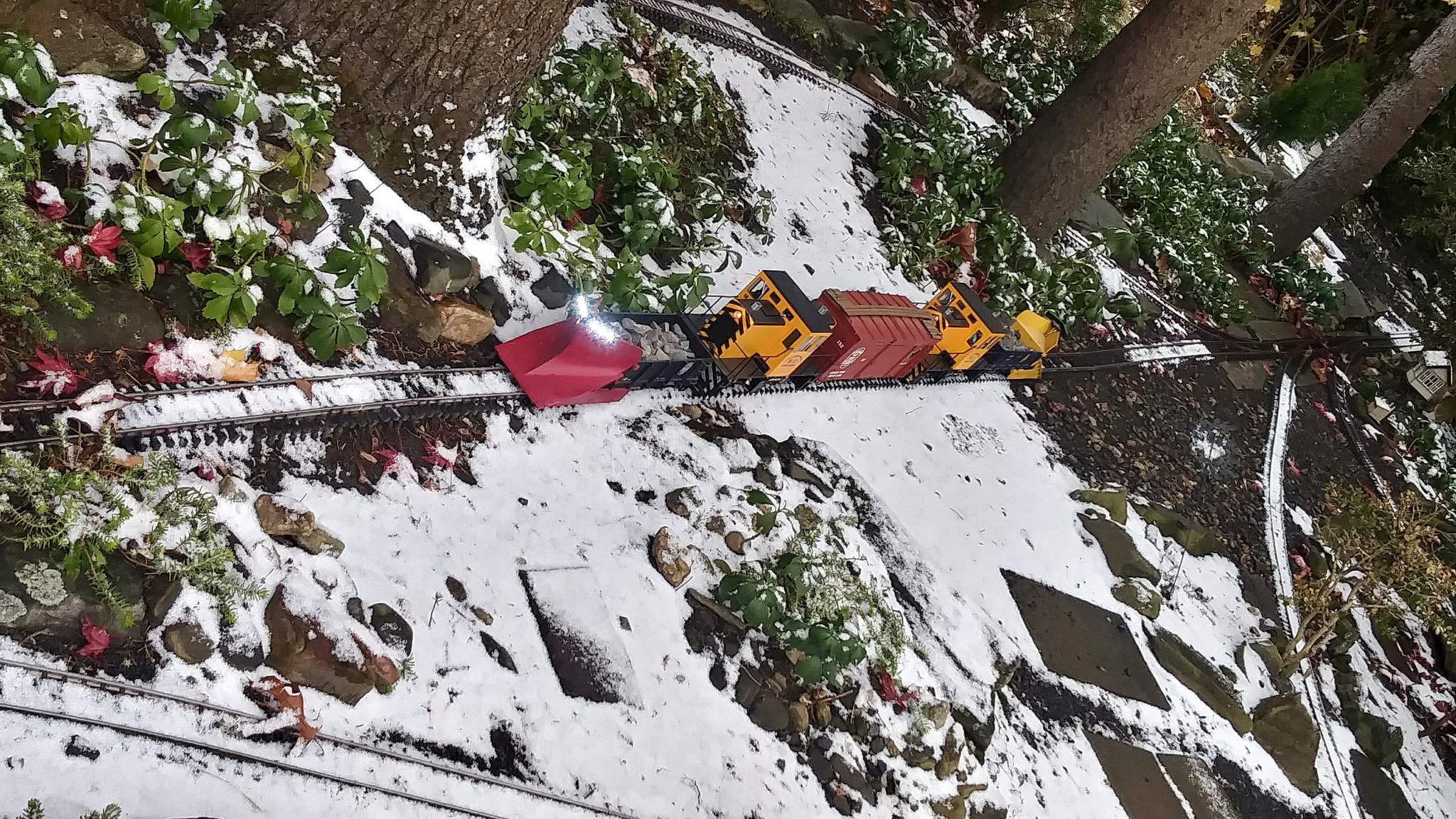 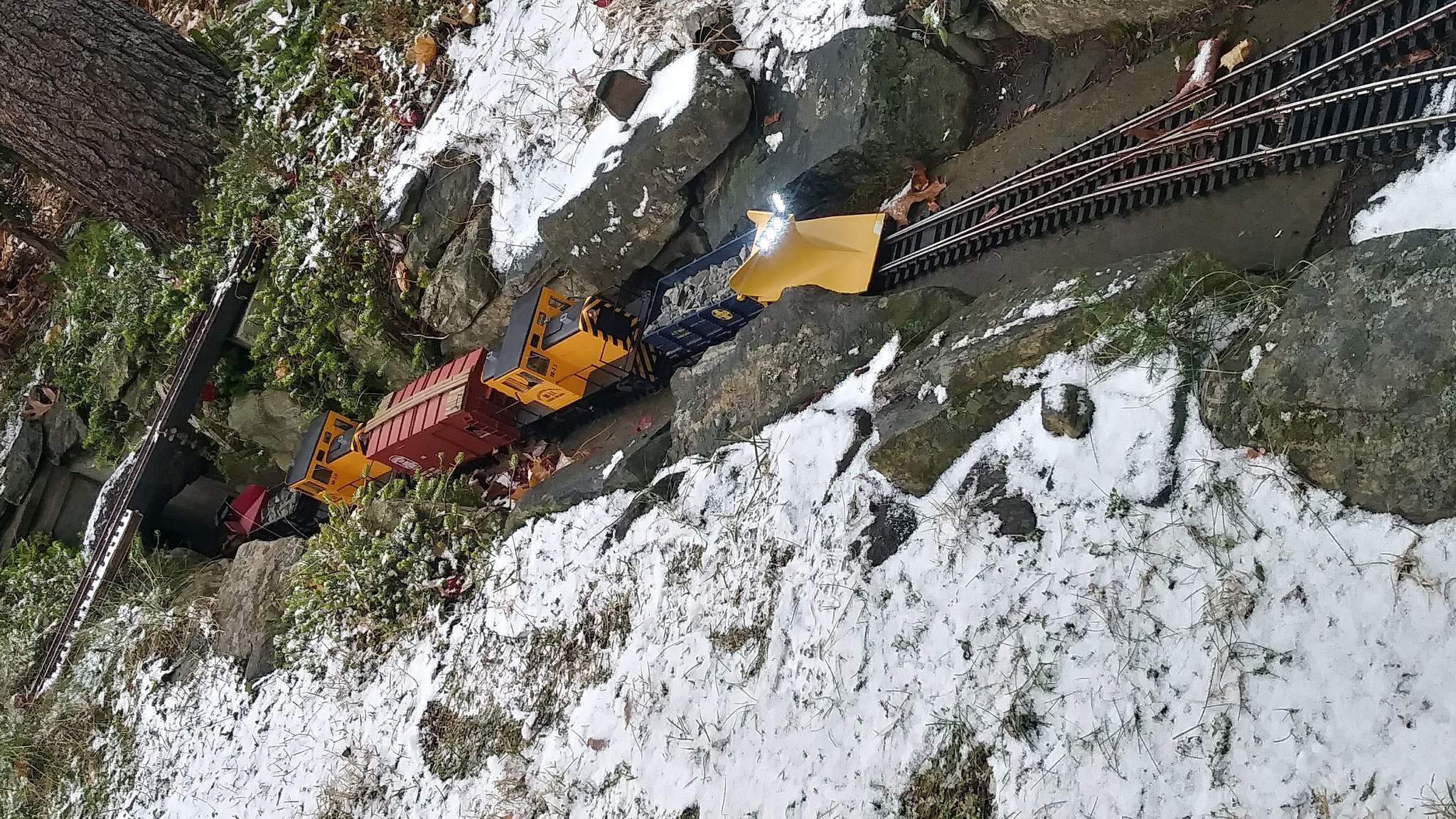 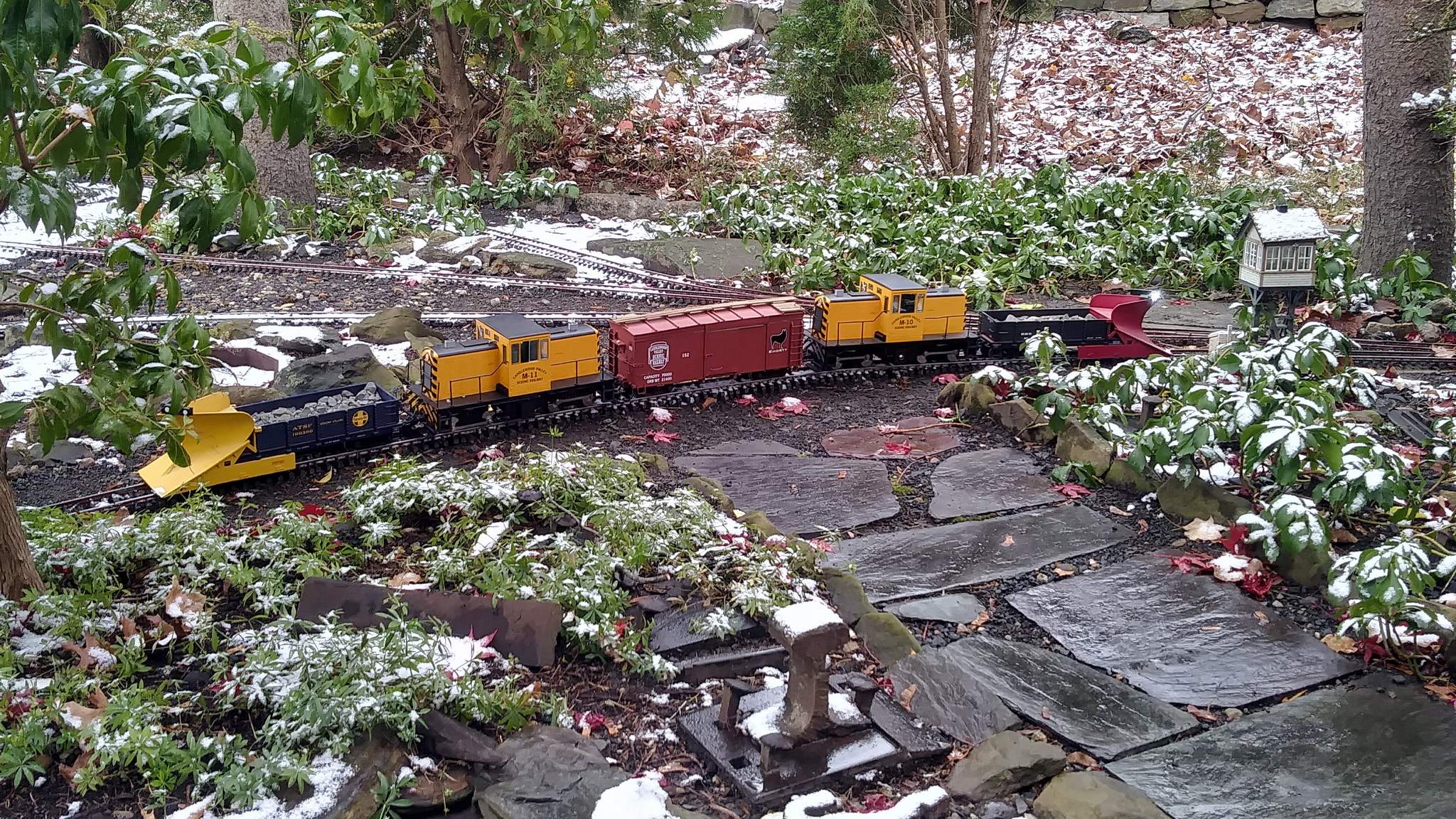 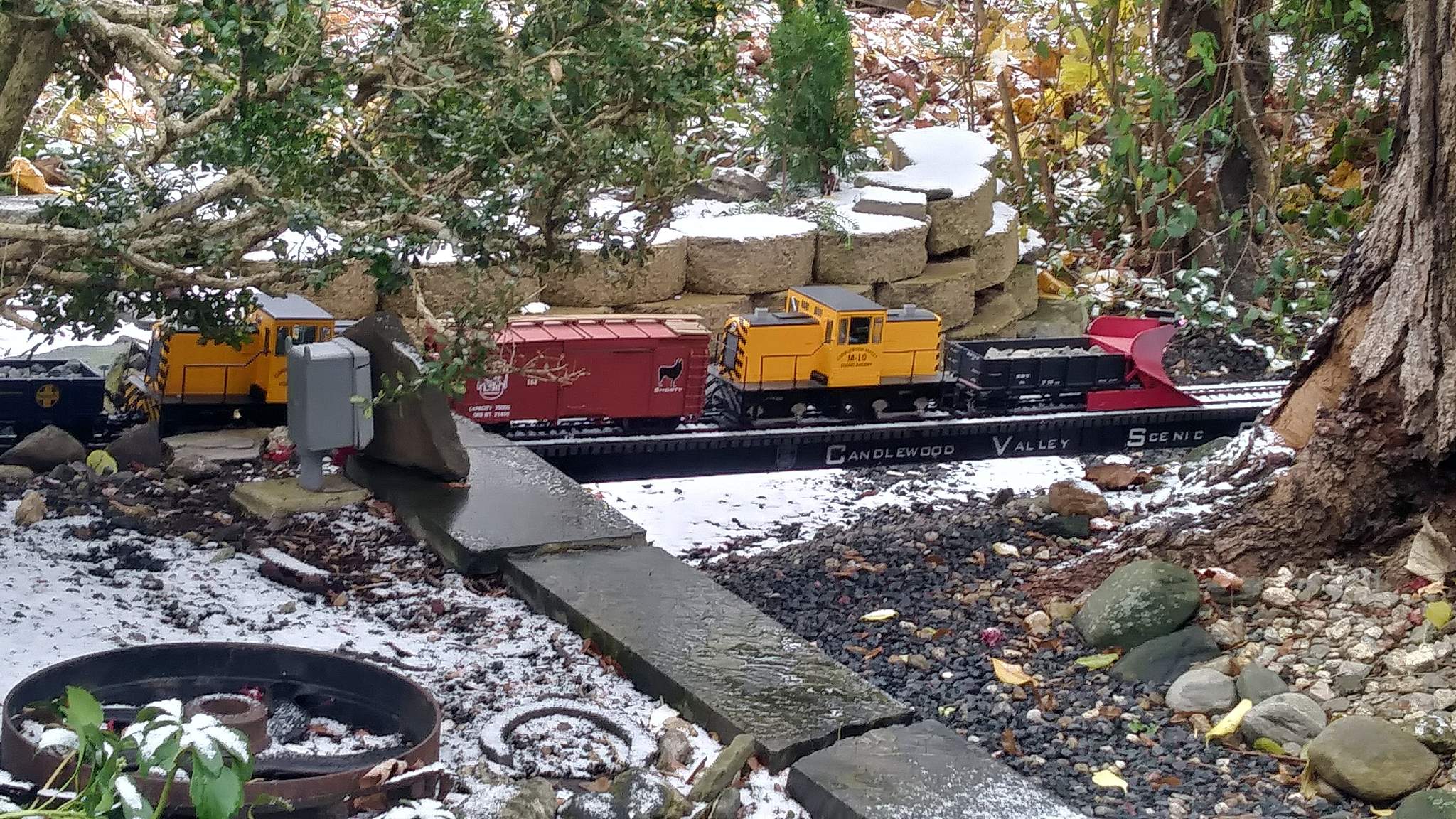 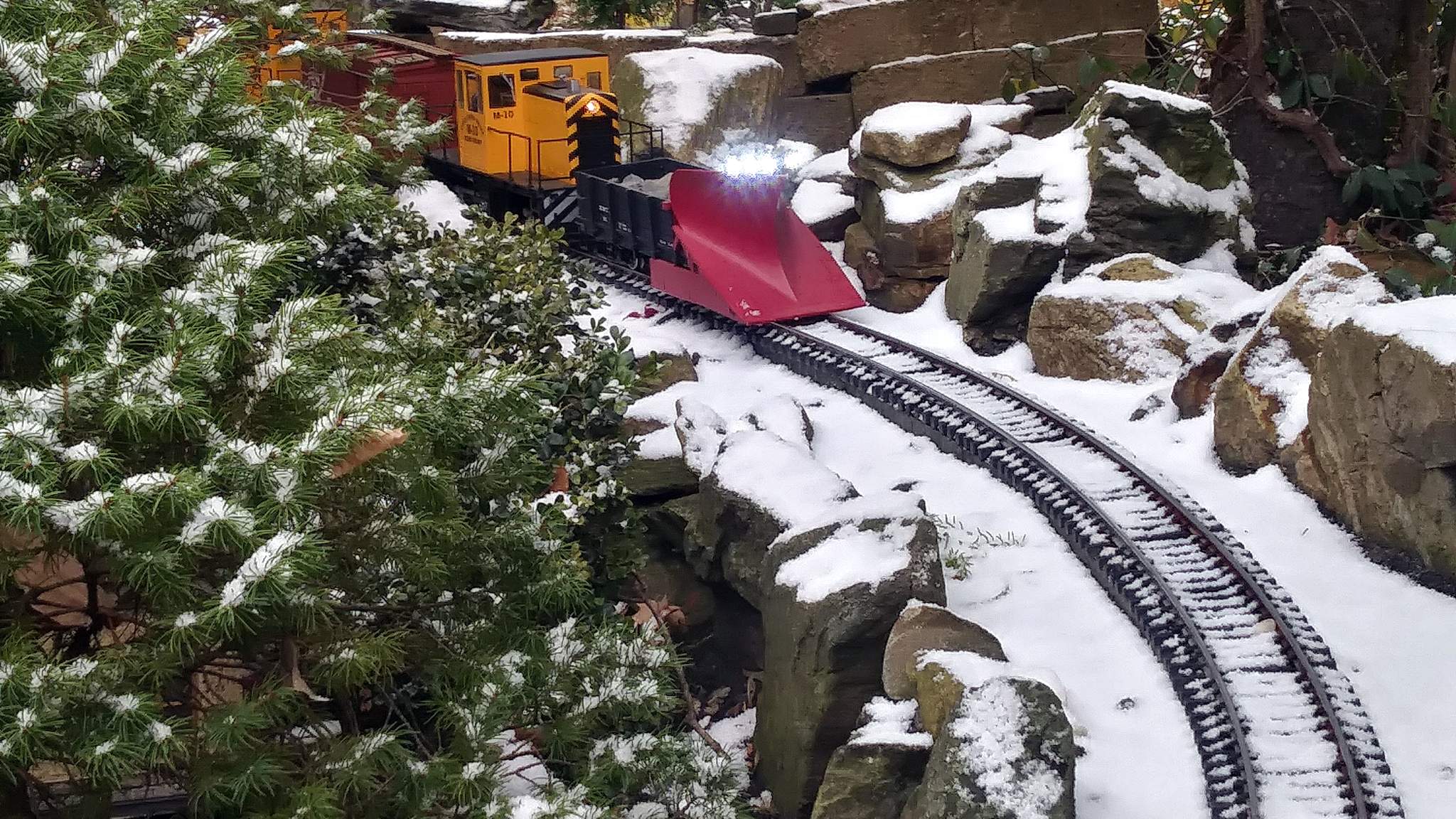 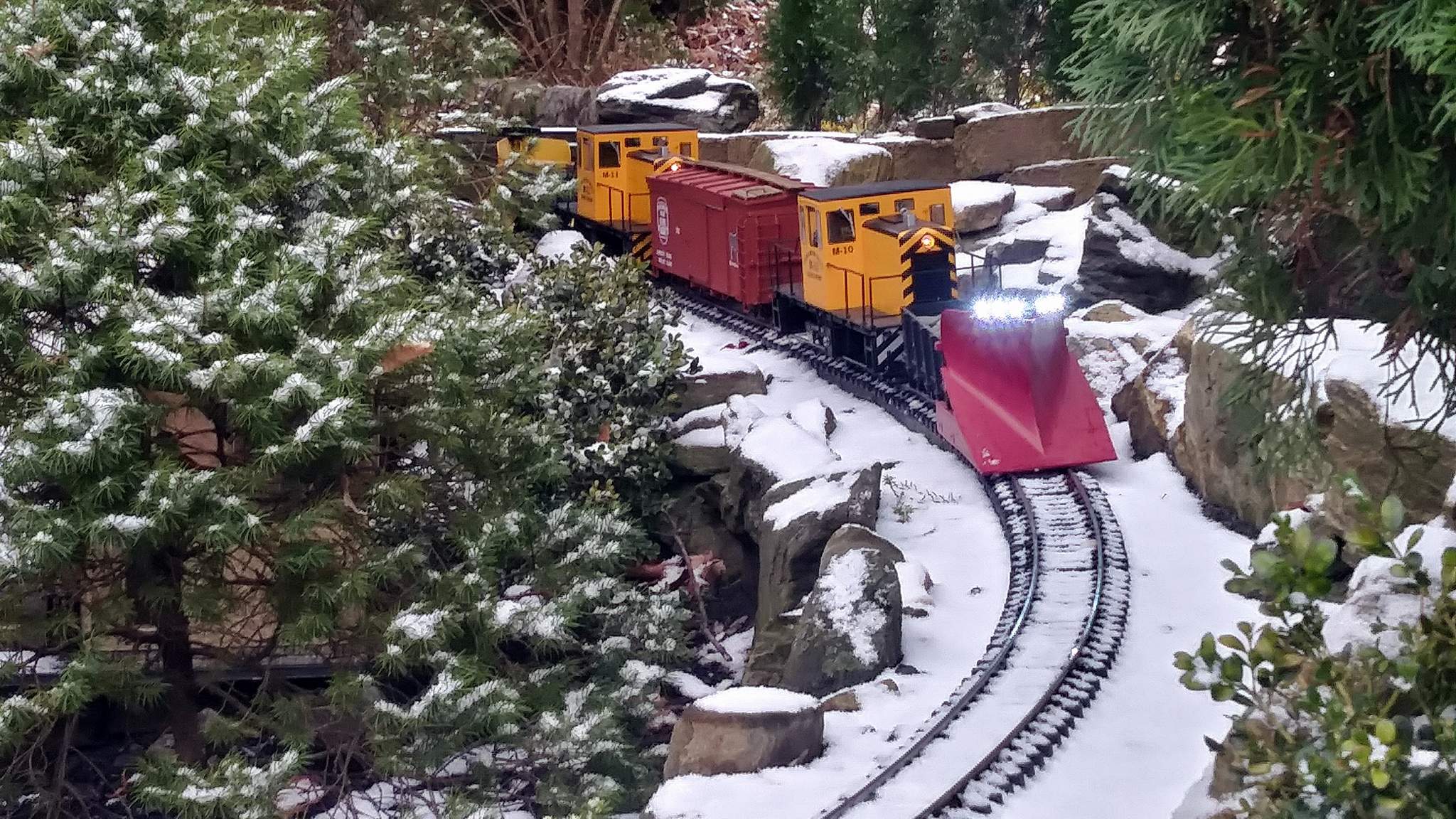 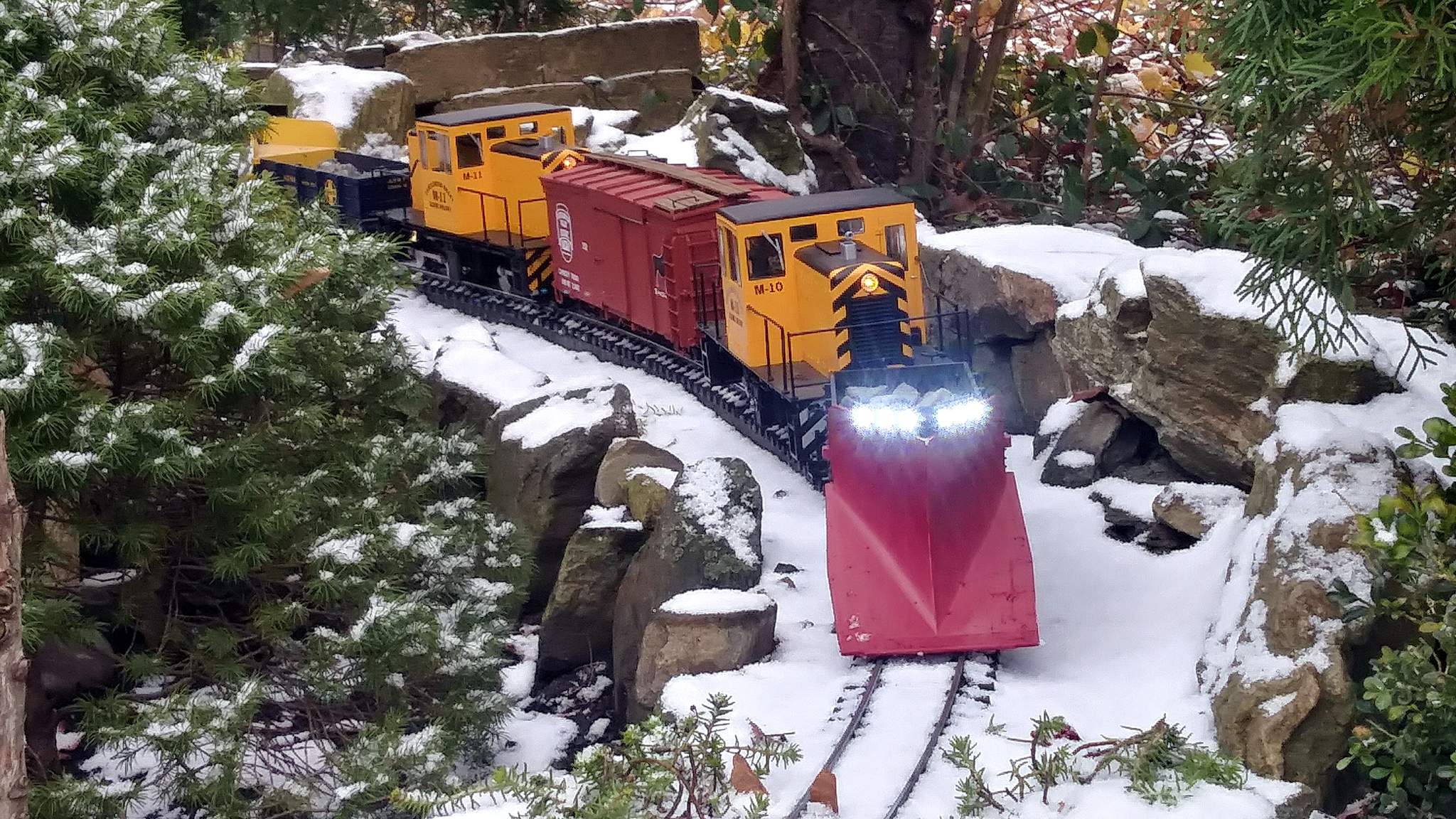 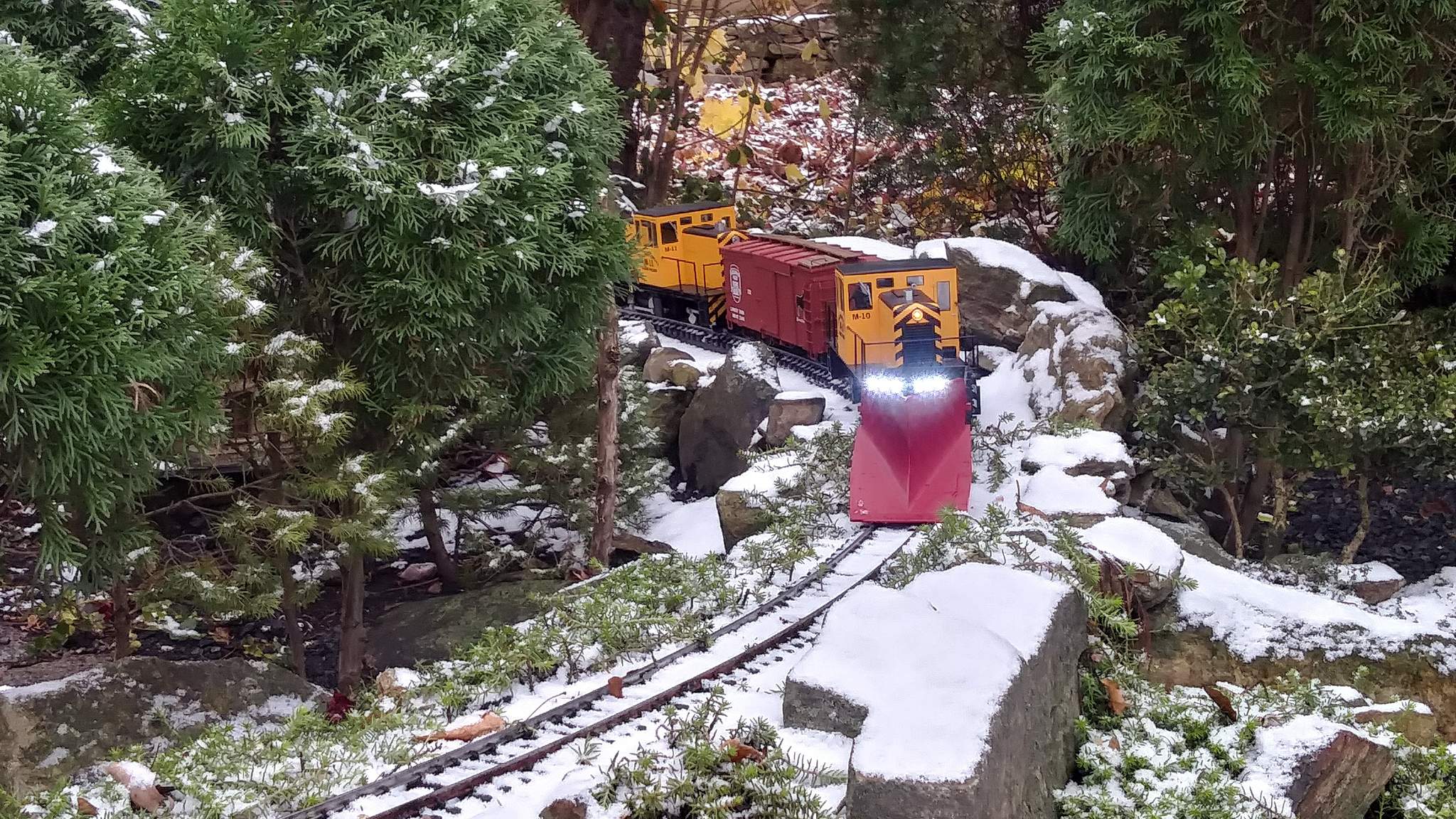 And a short video…

Just make sure ya keep that ugly white stuff up there…

Sweet! I like the lights, the ballast, and the double ended snowplow action. Nifty!

How many headlights does the lead plow have? Some pics make it look like it has four.

Cliff;
There is an untold story behind that seemingly “Over-powered” Plough Extra train that John has been testing.
Years ago while major investments were being made on The Candlewood Valley trackage, and infrastructure. One major cost was a rather oversize “Vault-like” structure at the end of an extended wye. At the time; I took note of the fact that we all grow old, and at some point in time, do tend to pass away.
With this interest I put plans in place to find a suitable place to bury a portion of my ashes. I figured on putting a portion in an LGB NG tank car, and having it left on an underground, protected siding…Jon’s vault was just the place…!!!
So; Jon is just running that Plough train to make sure the track can be kept clear for the future “Extra Train” in the event it is needed during/after a snow storm.
Jon also probably heard that I turned 80 this year, but neither he nor I know what my “Best Before Date” is, but Jon does go by the old Boy Scout Motto …BE PREPARED…
Thank you Jon…nice looking train…all it needs in the tool box is an appropriate Canadian flag, for the occasion !!!
Fred Mills

How many headlights does the lead plow have? Some pics make it look like it has four.

There are a total of 6 LEDs. Two 12V modules of 3 each mounted at 90 degrees to each other on a home-brew mount. The plow lights are powered by the loco. Each loco has a connector on the front to provide the 12V which is switchable/dimable via RailPro.

Some photos from the build… 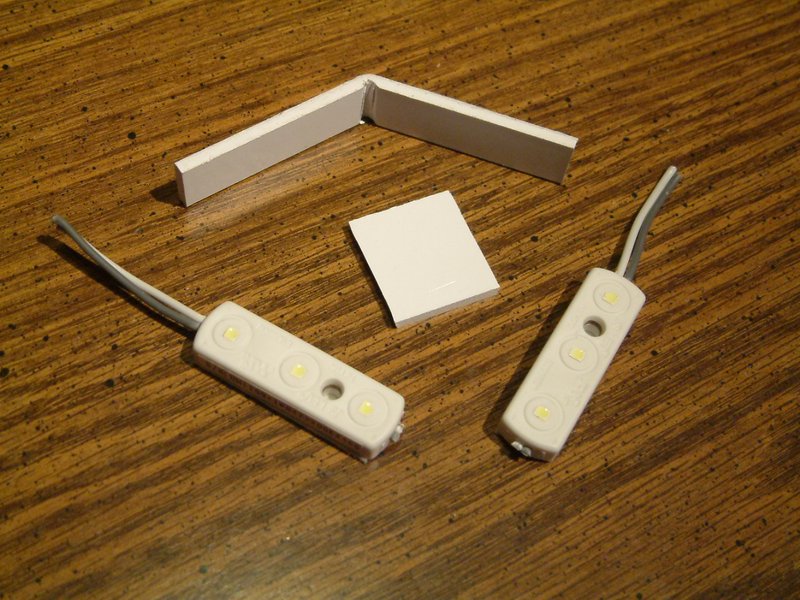 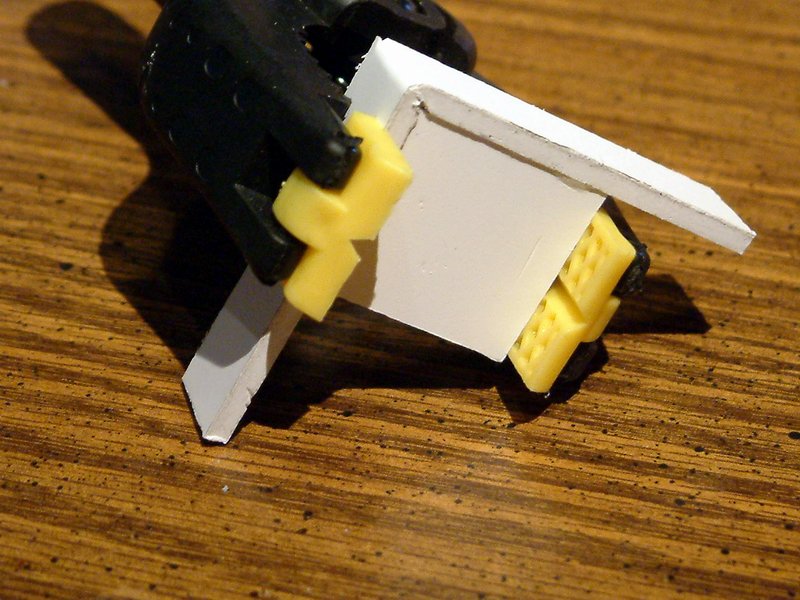 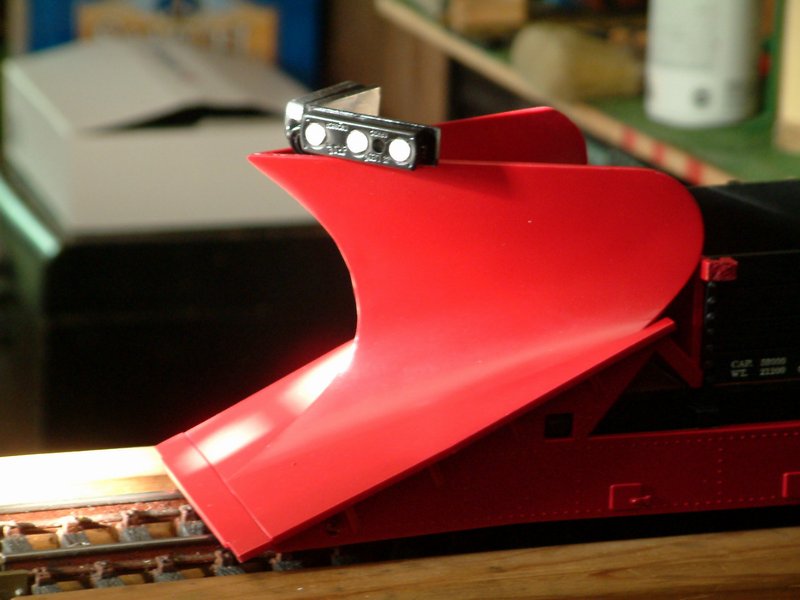 As Freddy notes, the double ended plow train is needed to run through the wye in a single pass. The red and black one is a one-of-a-kind Aristo plow factory lettered for the EBT. It was bashed from a Delton Classic wood gondola, a spare parts plow and 4 axles of ball bearing wheels.

The monster lights are so I can plow at night since proper snow rarely falls during daylight on a day off.

There was a build thread at the time, maybe on MLS. here is the roster shot from that thread… 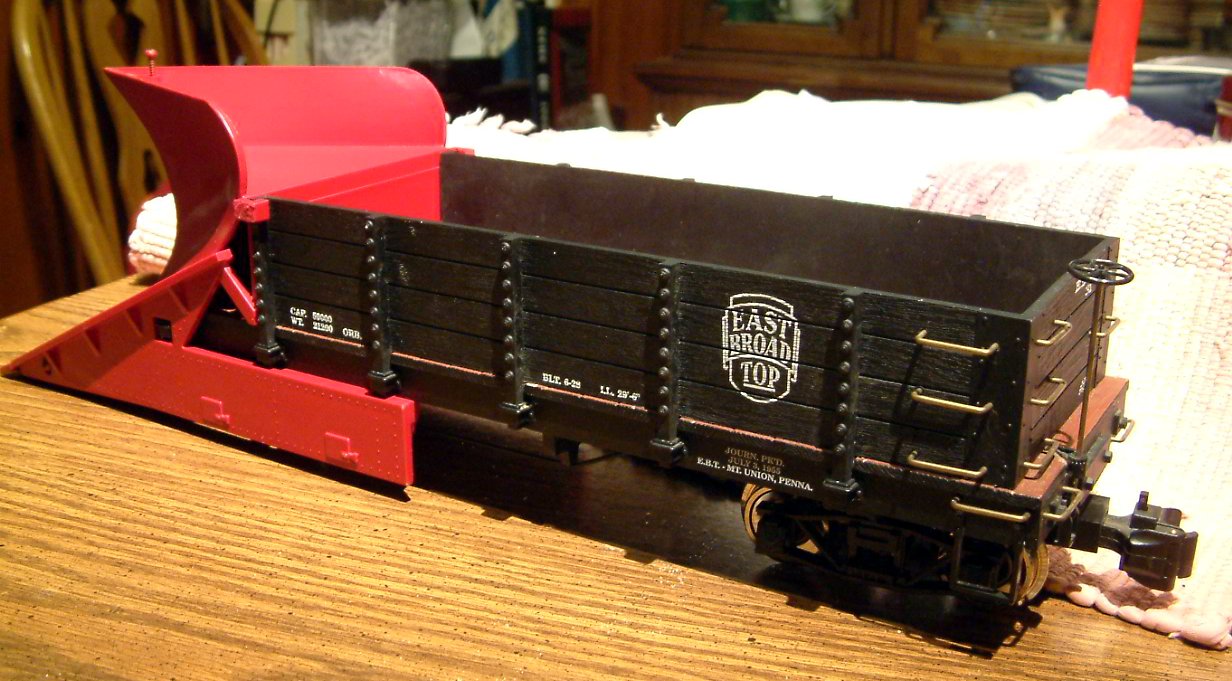 And thanks for the backstory, Fred.

I figured that by telling “The Story” others might be enticed to contact Jon, and make “Arrangements” for themselves. Jon can always enlarge the “Vault” to accommodate more “Ash Jar/tank cars”, as part of the Candlewood Valley Railroad business plan. We all are growing older, and will need “Accommodation” sooner or later. Jon could also provide the arrangement of “Wakes, and memorial train runs” to celebrate the lives of Model Railroaders all over Eastern North America.
He could involve our “Moderator/dictator, and Leader” as guest speaker…he lives relatively close by, to read the obituaries.
Fred Mills

Fred, you’ll be kicking trains for the next 20+ years, so I have to take your tale with a grain of salt or two. But I DO seem to remember the vault thing, from a D&B conversation a couple years back…

Jon, any thoughts on redecorating the train (or creating a new one) for the special vault purposes Fred describes? Maybe an inter(ment)urban?

Should have had this conversation at Halloween, haha!

Good thoughts, Cliff…we can take it a few steps farther…
How about a Large Scale Central, official Funeral train, or trains.
Two of them. one for those of Narrow minded/er…Gauge, and another for more modern Standard gauge persuasion (got to try to please the masses…!!)
These trains would be leased out to LSC members’ families, on the passing of their family/LSC members. Used also for delivering the “Urn Cars” to Jon’s special vault.
Jon’s “Plough Train” would always be standing by, in case of snow storms…with climate change, we never know when we will be hit with snow.
Fred Mills

This whole business plan can be taken a few steps farther…
There is no reason we couldn’t feature the important but often forgotten “Divorce Train”…the train every man needs to celebrate his freedom to have his INDOOR/OUTDOOR railroad anywhere on the property, without interference from that woman in his life…!!
Oh, oh…I may have gone a step too far…forget that one…

Well, I’m not certain, but the likelihood of the C.V.S.Ry. starving off abandonment for more than a few more years is pretty slim. Management wants to move west. Maybe only as far as PA or maybe closer to Denver where my kids are. Thinking about NM too.

Deep Cut and the Vault aka Fed’s Tomb will likely be filled in. Can you imagine 40 years or so down the road someone digs up the Vault with the long tube leading to it. What might they think it was - A drain to nowhere?

Party pooper…!!! Here I thought you were in a permanent home…where we could all rest in peace after passing…EGADZOOKS…you are letting us all down, after all these years…

…Here is a shot from the past… 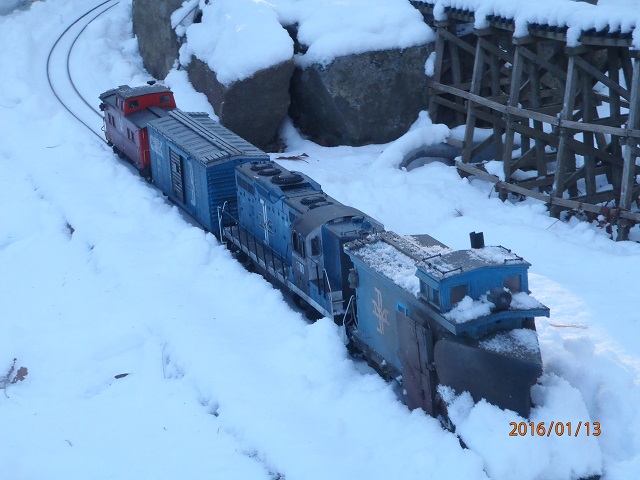 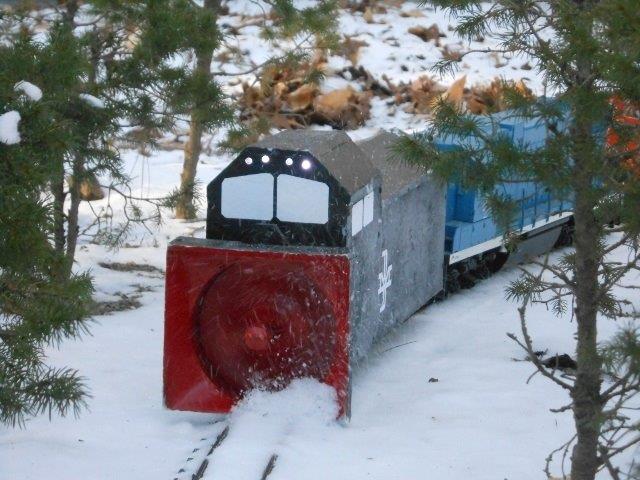 Old hat but staying on topic 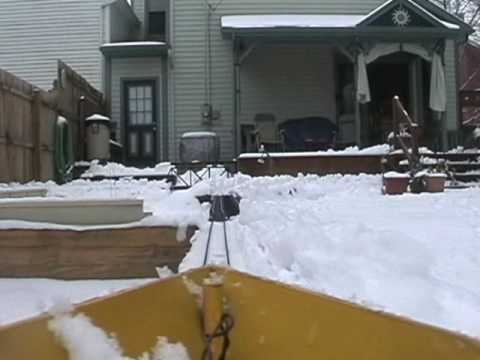 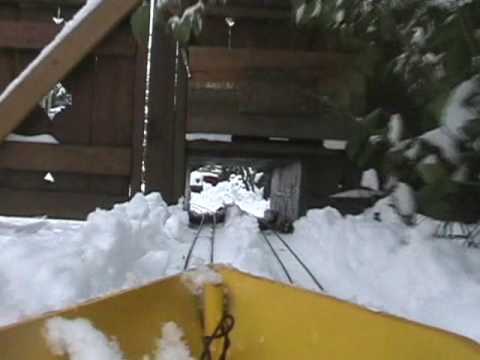 And this has to do with plowing snow because ?

The shake-down run pointed to a few problems that I have since corrected. The red EBT plow was a kit-bash that I body mounted an Accucraft coupler on. I noticed it was possibly loose and sagging so I dumped out the ballast and took a look. While I had it apart I corrected a slight coupler height issue by raising it about .060". All back together it lines up perfectly.

The yellow SF plow was my original and still had a truck mounted Aristo coupler which is not a great match to the Accucrafts on my locos. So it’s ballast was dumped and an Accucraft body mounted to this one as well. Rather than cut off the truck mount tang, I just rotate the truck 180 degrees after removing the coupler. This did require cutting the power leads from the ball bearing wheel sets, but I no longer use that wiring so it won’t be missed.

Both plows being maintained, ballast was loaded in preparation for the next call. Weather forecast looks like a warming trend, so they are not likely to see service anytime soon.

I had pretty much retired from the group that plays with trains outdoors in the snow. The death of one of our engineers in a plow extra derailment in 2017 pretty much put an end to witner ops… 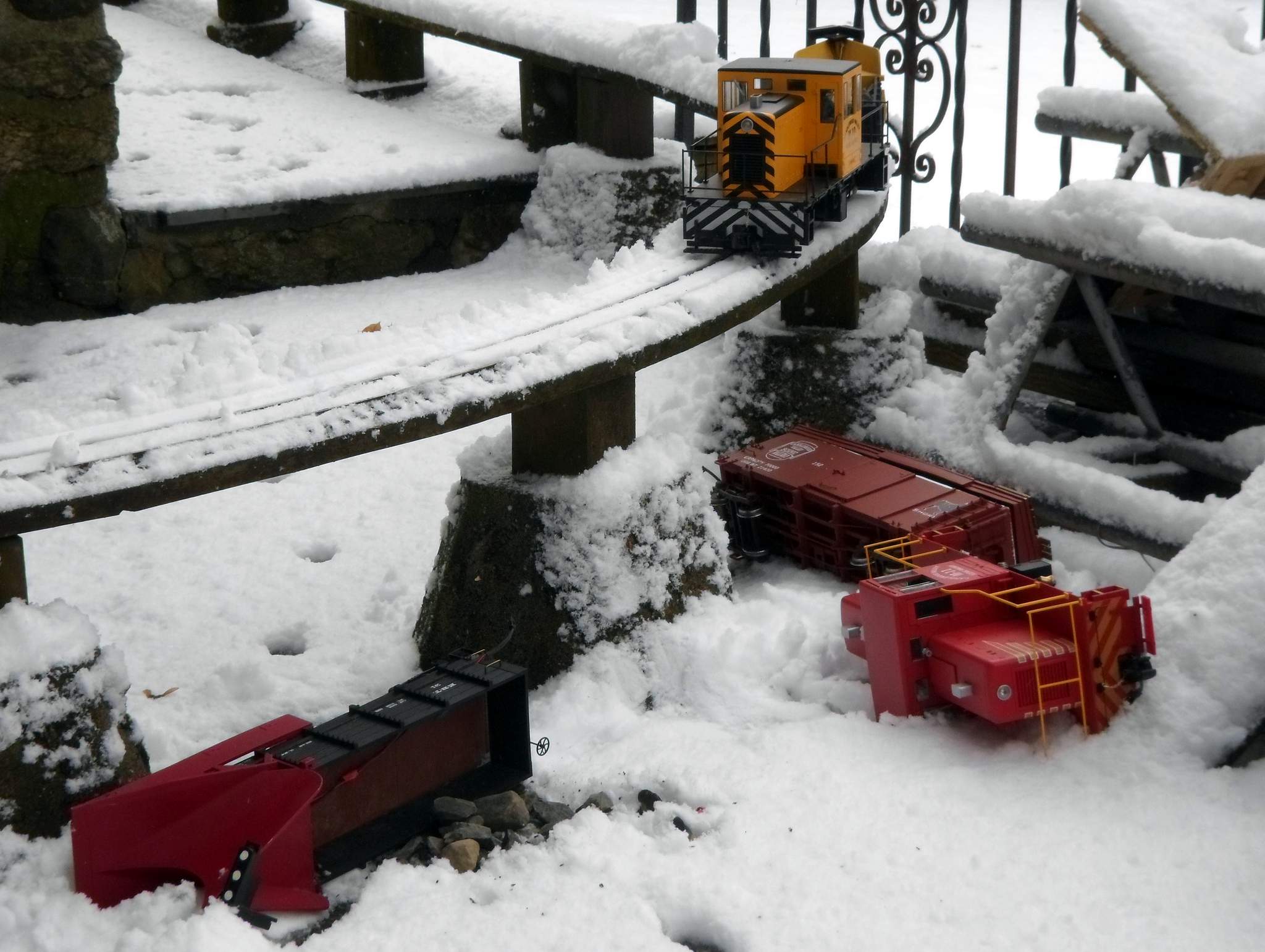 I decided I’d give it another go with the new RailPro control where each loco is independently controlled but linked together with proper load sharing. Perhaps that will prevent the rear loco from pushing the front loco off the tracks!

All bets are off if it’s much below 30 though! I like a warm snow!

I admit it. When it’s cold I’d rather just play trains inside by the fire