Tonight, I thought I’d take a break from my usual practice of using others’ experiences and add to the body of knowledge instead with Clan Mueller’s experience with PIKO’s “Clean Machine” variant of its new GE 25 Tonner.

BOTTOM LINE: This is a fun little fire-and-forget loco that looks good pulling short trains around our small layout (~100 feet of track) while providing at least rudimentary cleaning service. It would probably be most appreciated by folks with similar small, track powered layouts for those days you need to get something - ANYTHING - running and the electronic gremlins are not cooperating. It is kid friendly while close enough to the adults’ models in heft and appearance to keep the discriminating budding railroader enthused, and, in my opinion, is something that you could upgrade as you go to match the maturity of said discriminating budding railroader.

BACKGROUND. I have been on the hunt for a kid-friendly loco for years as a means to keep the family and especially the kids engaged. The LGB battery powered set was a lemon. A Bachmann railtruck the extended family bought for Oldest Son failed, and, though Bachmann honored the warranty with a different product, Oldest Son got sour on the whole project. With Kid-zilla lusting over the little PIKO diesels since they began appearing in Garden Railways ads, I hoped the “Clean Machine” would a.) fit a need for a kid-friendly loco, b.) serve as our ready-go loco, and c.) last longer than a week. I rallied the extended family for the cause and placed the order, and we took it out to the Hawaii Historical Railroad for its grand acceptance.

LOOKS. Did you know we had a real one out here in Hawaii? Neither did I! The Triple O now has a piece of equipment that actually RAN on O’ahu! Anyway, With the exception of the handrails, the model was a deadringer from 50 feet away (Qualifier: I generally think all diesels look alike. Take my assessment with a grain of salt): 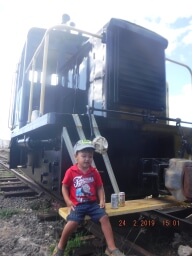 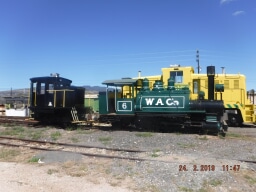 You’ll note the handrails on the real thing wrap around towards the nose. The model has an opening in the handrail forward. Given the crowd on this website , I am sure these locos are bound for your shops for modifications, anyway…

The bell and horn come as ad-on details. Do note, if you plan to make this your “ready-to-go” loco for small visitors, they come off easily and break more quickly. I found this out the hard way when Kid-zilla’s sisters thought he might like to hold his birthday gift in his lap while watching cartoons. Oooopsss.

The photo below shows Brian, the engineer, giving Kid-zilla his birthday tour of the cab: 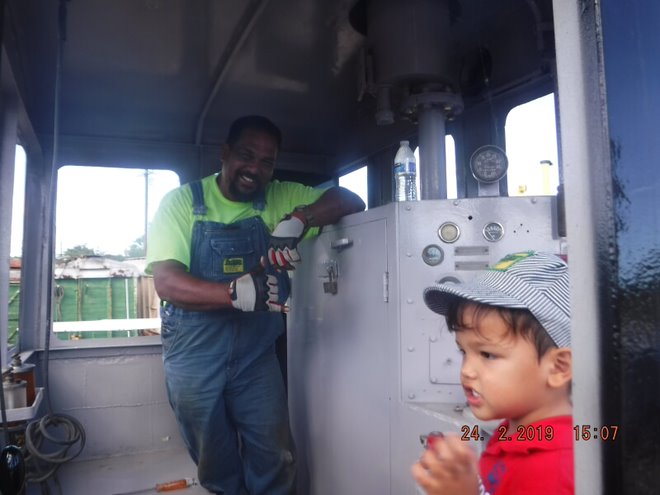 PIKO included exactly none of these details on the model, not even a sticker! The center console is there as is an exhaust stack, but beyond that, it is blank plastic, which may be boon or bane depending on your plans for the model. The most tragic part from our perspective is that you cannot jam a PLAYMOBIL guy in there to “drive” the train. I should add neither Brian nor Kid-zilla come with the model.

OPERATION: Newly christened Diesel Dan entered service about 5 minutes after we got home, which was about how long it took to find and install 6x AAA batteries. As you can see, it is simple enough for Kid-zilla to get on the track and run up a string of short gondolas to carry the Triple O’s work gang: Running like this on old batteries on a largely level layout, Diesel Dan happily rolled along for about an hour*.* With fresh batteries or freshly charged batteries, he’ll do an easy 90 minutes. If you plan to run one of these little guys more than once a week, a 12x battery charger is a must. With 6 in the loco and 6 on the charger, that is more than enough time to satisfy nominally interested guests, pacify your Kid-zillas, or simply get something - ANYTHING - running while you run your wires and get down the stuff you really want to run.

Hopefully, this video, taken later that same week, gives you an idea on how it might look on your lay-out:

If not, how about a crummy picture? QUIRKS: The on/off switch is tucked away underneath the cab and is, in my opinion, hard to reach. I broke at least one handrail at its base fumbling for the thing, and the others will likely follow. This will give me an opportunity to bend my own from brass wire after I am assured no one will try to hug the loco. The placement also means that once on the tracks, you may as well let it run until the battery goes dry. Catching, stopping, and reversing are not worth the effort. When Diesel Dan is out there, stops at stations are thus usually done by derailment as hands big and small fumble for the switch (Was that a handrail?). Also, you sometimes have to fiddle with the battery pack to get it to stick to the terminals in the back of the hood.

BUT DOES IT CLEAN? We did not put electricity to the rails for about 2 very rainy weeks. Normally, that means at least 90 minutes of scouring to get our electric locos out and working. Diesel Dan had been at it, though, almost every other day, pulling short trains and scouring the rail tops. We ran power to the tracks, parked Diesel Dan on a siding, placed a couple locos out there, turned the throttles and the Triple O sprang to life. We only had to touch up a few places gotten particularly gritty, such as points on our turnouts and a few rail connectors. Since then, we have gotten very similar results.

CLOSING SUMMARY: The “Clean Machine” looks good, runs, great, does what I need it to do, and even cleans the rails while it does it! It provided us a needed “go-to” loco that has meant we run trains more often, and it gave its three year old owner a something from the whole family that is “his” to show off. I like it enough to consider upgrading it to R/C, and I think as Kid-zilla gets older Diesel Dan will be a nice base for us to practice our craft together…starting with those hand rails! To be brutally honest, I could see getting a second one for me and trying my hand at painting it either in the prototype’s current livery or in its original Navy colors, and I can definitely see getting a HLW work caboose as a dedicated MOW car for this little thing.

That being said, if you run battery already and have the stuff laying around to convert a small loco to battery, I cannot see the “Clean Machine” making much sense. Likewise, while it works great providing cleaning services on our little railroad, I wonder how well it would work on a larger one…though a fleet of these things scurrying along might be sort of fun!

This controller may save your railings and tempers …

The latest versions come with a remote control. It’s not on the US site, but on the European site. Several people in the UK have gotten them.

Note that it states “This product is expected in September”.

Thanks Mark, in Europe the “word” was that it was being replaced (same item) with added remote control for no extra $$

On the US site, there’s a new part number, different paint scheme, and more money for the model with the remote control.

Perhaps the “word” in Europe was wrong, but you have clarified what is happening here in the US. Wow, $60 extra for the remote, maybe better to add Del’s critter control unit?

What you tried to post as a video is actually the right hand picture above it.

@John: I had heard of “Critter Control.” I even looked into it as part of my LGB M2075 resurrection project, but couldn’t find the link. Bookmarked for future use!

@Mark, Greg, & John: How / If I put R/C in Diesel Dan will depend on how PIKO markets the kit in the U,S. If I have to send “him” off for the installation, the postage will be prohibitive. If I can do it myself, it is an even break with the “Critter Control” pricewise.

This topic has to be re-mastered every time the site owner makes an upgrade to the software. For this incarnation the procedure is…

That’s what we all found works now. Some day down the road we will have to find a new way for new software, but for now this works. Have fun!

2 substitute “picture” for the word “file”

Please remove your link. It takes over and redirects LSC to your One Drive link in about 10 seconds. I had to type this reply in a text document and copy/paste it to reply to you.

As with anything I touch, Diesel Dan stopped working*.* It turned out the battery clip failed, of all things! Before proceeding, PIKO came out swinging, helping me to troubleshoot and offering to pay for shipping both ways. I was irritated, especially given my track record railroad related gifts, but very pleased with the level of support I received. A replacement battery clip and circuit board should arrive shortly. For those curious, the spring to the female terminal mystically decided not to conduct electricity…

The troubleshooting did afford me an opportunity to open the unit up. What a delightfully elegant design! Well laid out, with enough extra wiring and easy disconnects to let me isloate the fault bit by bit, working from the motor backward (I never supected the battery clip.). The interior, to include wire colors EXACTLY match the manual, making it a relative breeze to reassemble. A lot of thought clearly went into this product, so I will stand by my initial positive evaluation.

About 96 hours from problem ID’d to part in hand. THAT is customer service! Diesel Dan is back out on the tracks getting them ready for the weekend.

Eric, when you can, would post a picture showing what broke on your track cleaner? Perhaps it is an area that others can watch to avoid the issue you got, or do you believe it was just a bad solder joint from the factory?

A picture of the failed part would be great.

This is the failed battery clip: My camera had a hard time focusing, but the failure occurred where the spring leads into the female terminal. You can see where I jumped the break by (badly) soldering a wire from the spring to the terminal which temporarily solved the issue. The spring itself winds under the back of the terminal, so I suspect the break happened in there. I do not believe I did anything to break that connection, so I think I just got the one bad part in PIKO’s stock. Per their customer service guy, this was a first for them.

If it illustrates the failure better, I performed a test when I trouble shot that I could use to visually show the problem in my correspondence with PIKO. You’ll note if I used a the male and female terminals, nothing happened in my highly sophisticated test circuit: I knew it had to be one of the terminals, because touching the test wires to other metal bits on the battery clip lit the bulb: 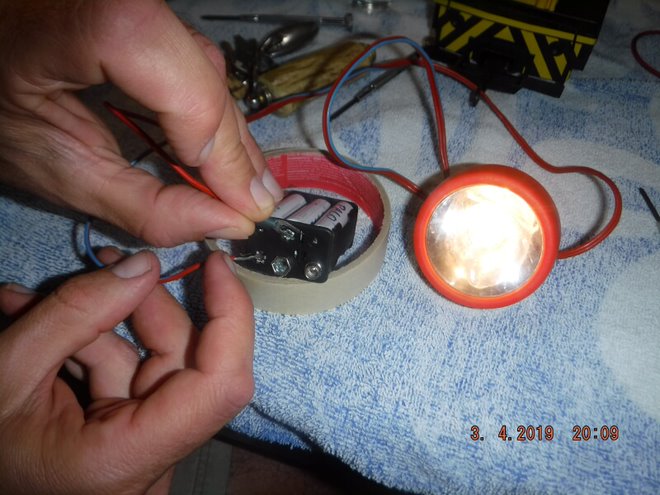 From there, even with my electrical engineering mental block, I reasoned the only break point could be that spring going to the female terminal, something a quick continuity check with my multi-meter confirmed.

P.S. All else having failed, here is a link to that quick video clip: https://1drv.ms/v/s!Al9dghtWN_3bgYFBbae8VwQ225j_EA