I’m hoping to encourage you to keep posting pictures of your amazing models. I decided to try and document picture posting with the new editor the best I can. I use Firefox. All other browsers can do the same but the command wording may be just a bit different.

then paste in the Image URL box… 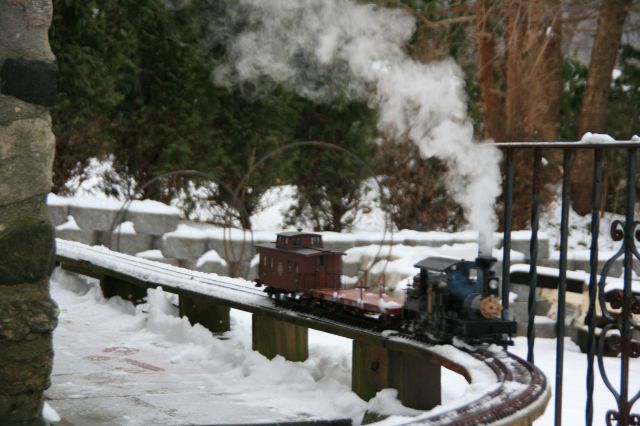 The images will show in the editor which is agreeably is a little cumbersome in the small editor widow. Perhaps someday in the future the edit window can be made sizable.

I’d say to blame Rooster, but he might get a complex…

Thank you very much for taking the time to “splain ittome” That seemed to work with no glitches even though it is several more steps than before. At least it worked with no “frustration factor” thanks again guy!!

While your looking this way a question. What is this album thing? My shed is just about full again and I have to keep dumping pictures to add new ones does the “albums” extend this storage and can I post from them?

If your looking here is a shot of the 60’s on their flat car. Will do more on them with the arches later.

I have had help and encouragement on this picture posting thing and a couple other posting issues in several other threads recently and want to take this opportunity to thank one and all for taking time to try to straighten me out.

You’re welcome Rick. Granted it is a few more steps than it used to be with just clicking on the file name to get the URL into the post; but at least it now works for everyone.

Albums can be used as a picture source for posting. Bob hasn’t finished developing his ideas for the albums. For now hey are just there and the space isn’t limited. That could certainly change if it gets misused.

Posting from an Album picture is similar, but you probably want to open LSC in a second tab so you can get to the album easily without disturbing your post.

Once you have the photo you are interested in open in the album look at the bottom for an image URL that you can select and coy with a mouse drag. It’s a bit tricky, but can be done. Then just paste that URL into the Insert Image box as above…

You could right click on the image in the album then select Copy Image. Come back to the editor tab and paste the image in…

I had heard discussed in the other thread that Dran-n-Drop was now working, but I haven’t been able to make that work with Firefox on Win XP.

Where is the power steering fluid reservoir located ?

Where are the HEP, Comm and MU ports/ cables

Just noticed that Bob made this a Sticky thread. I’m honored! Thanks Bob :]

Jon, I am unable to get a short video to post from photobucket. Photos work like a charm with there direct link. The video thing I can’t figure out.

This is the URL [ direct link copied from photobucket ]

I have failed the test as well Dave …however as you know it;s video your trying to show not pictures.

The first one you posted works, Rooster.
You just have to adjust the sliders to see the video.
Ralph

Rooster’s first attempt, using the Insert/Edit Media button just gives me “Plug In Needed” screen. I don’t know what plugin it wants. Ralph must have the plug in.

Not such a fan of the new image insert mechanism, its much clunkier than the old version

IS there ANY way to preset the “Alignment” tab when posting pics? Now I ALWAYS have to pic something (usually “top”) in order to get the pic to post otherwise I get the dreaded X-in-the-box.

Also when I open the image tab the box is ALWAYS small, about 1/2inch square and I am constantly wasting time dragging the box open large enough to work in. Its gets VERY old after a few pics.

Vic, you are the second complaint I’ve seen about the Insert/Edit Image box opening tiny. What are you posting with (PC, Notebook, Laptop, Tablet, Phone) and what browser?

For me, on a PC running Firefox 25.0.1 the box opens about 4 inches square with all the fields visible.

BTW - I have been leaving alignment at the default — Not Set — and all of the other fields except the Image URL blank.

So how do you post photos without using the “insert image” button? When I’m posting step-by-step stuff, I write it up one time, with the image links in the text, and post it on several different forums. I don’t want to have to redo the whole thing just for this site, and I don’t want to have to hunt down and insert each pic one by one.