I have done 0 since…1952. Three rail, but while in the Navy (70’s) I started HiRailing them…better detail, paint and graphics.

I started this pike 30+ years ago, small basement, then enlarged the basement for the dirt for the outdoor railroad…wall out…and the basement pike sat for 20 years.

Four or so years ago, I decided to make it run again…so I did. Expanded benchwork into the “new” section, laid track (GarGraves) and switches, tore out the old yard, made it an industrial section with a reverse loop…month and a half ago I tore out my buddy’s NP line, 33’X13", and ended up with close to 500 feet of really nice GarGraves, and 51 switches.

I am replacing some of my really old track, and switches, and putting a new double main around the outside of the “new” section, plus a double-ended yard, the turntable benchwork is in, waiting to raise the 3/4" ply 1/4" to match the rest.

Hopefully this month I will have the stuff down and can install all the under bench Tenshodo type machines.

I had ONE All-Trol, needed three, been out of production for over 25 years…and I ended up with two more, so things are looking up. 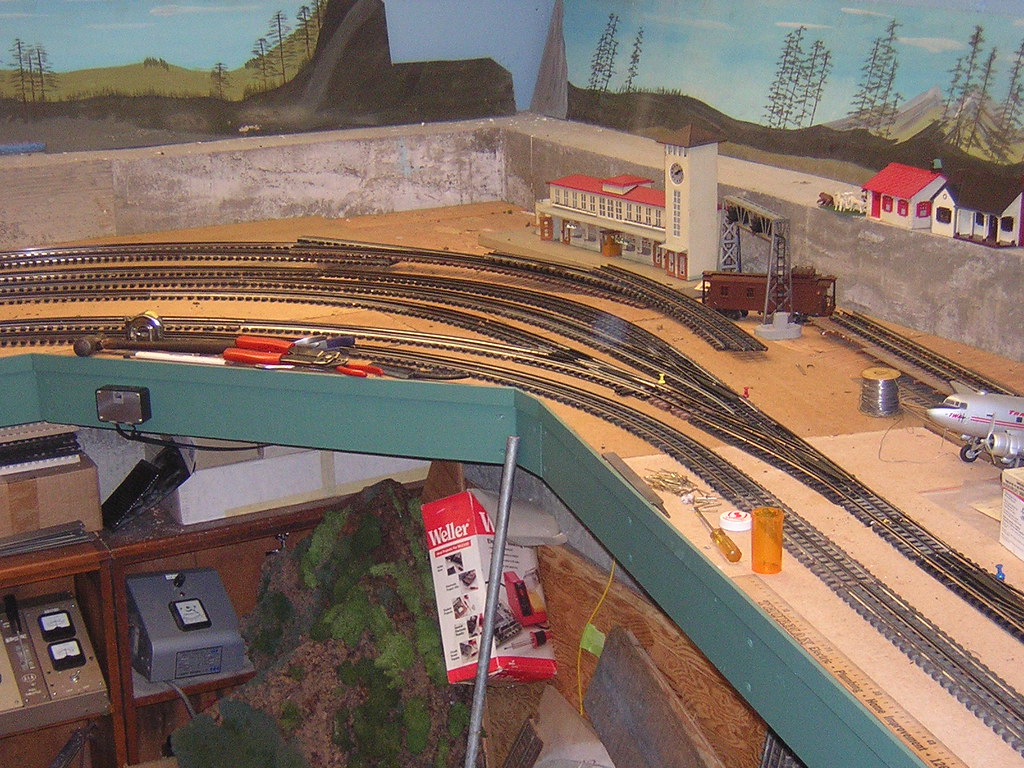 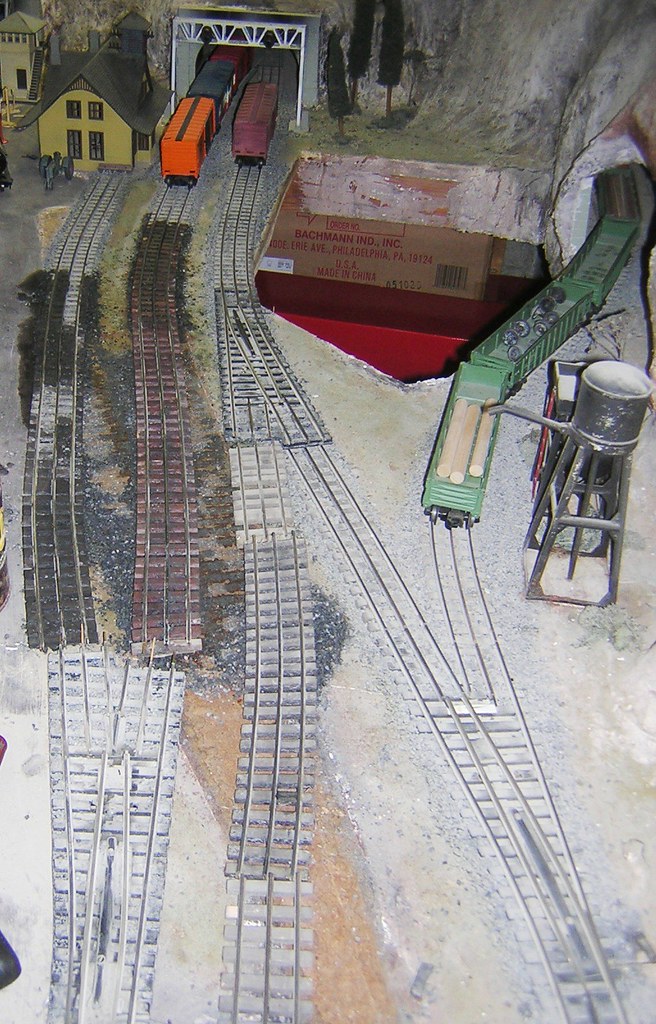 That’s realty cool Dave. In all the years that I’ve known you, I’ve never have had a chance to see the basement layout. Looks good.

Yeah, I was not allowed into the inner sanctum either, even though I brought cigars. (http://www.largescalecentral.com/externals/tinymce/plugins/emoticons/img/smiley-wink.gif)

Oh, you were allowed…somebody with you said you had to leave NOW.

I keep asking when you’re coming up next. 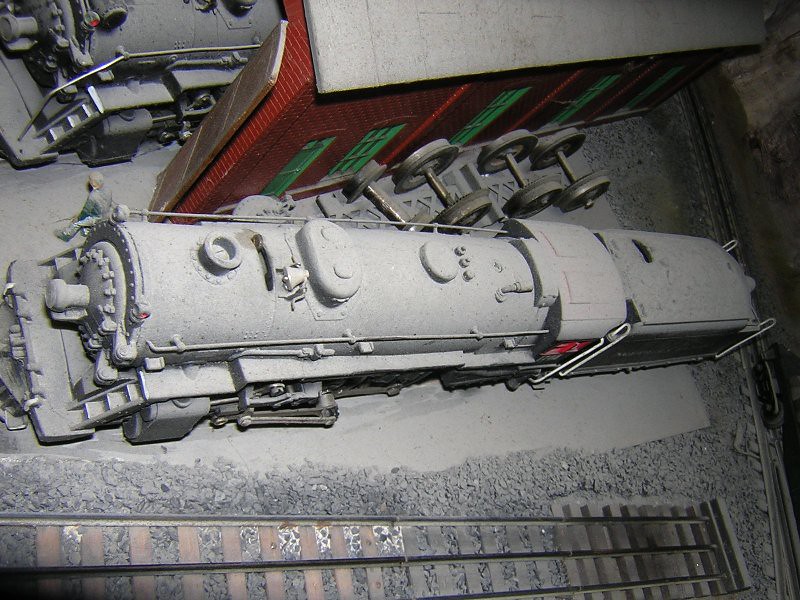 I’m hoping to make a trip soon… Maybe bring my 3 year old kiddo along too. He’s already figured out how the throttle works.

Oh yes, I remember those days. 2 hours a bus ride, followed by 5 hours of trains soaking in the rain. For some reason my folks wanted to pick me up around 21:00 to 22:00…

Gee, that reminds me of a 1:1 locomotive shop I was at once. The stuff under the shelter out back looked just like that.

Only speaking “technically wise” and I have read it twice.

Can you explain that to Neil Young for us please ?

Couple of months ago, after the new part was temped in, I knew I had to put another bridge across the doorway to outside.

First time in 65 years I have had a full double-tracked layout. All been single, passing sidings, even point-to-point.

We are working on a flip-up panel to hold the two bridges at the door to make it easier to open and close.

Safeties are wired in, trailer flat plugs, when you undo them to lift out the bridges, all power for a LONG way back is dead.

Seriously, looks like you’ve got a lot of fun ahead of you. I look forward to seeing your progress.

Now thats dust. Next time my wife says they house is dusty, Ill show her the one above lol… Look forward to seeing your progress.

Seriously, looks like you’ve got a lot of fun ahead of you. I look forward to seeing your progress.

Don’t think I didn’t look into it carefully.

But, with 30 engines, and every one an open-framed AC (universal) motor, drawing an ungawdly amount of amperage, I opted to use the old All-Trol memory walkaround.

Also, you gotta run smoke! I think the smoke pellets from that era will also kill roaches and ants!

Also, you gotta run smoke! I think the smoke pellets from that era will also kill roaches and ants!

I learned many moons ago, that smoke in engines indoors was a BAD idea.

Two, I had smoke, even converted from pellet heaters to liquid heaters.

Had this (much smaller) railroad upstairs (still using Lionel 072 track). The ceiling was six feet. You had to walk around the light fixture.

When the layer of smoke got down to your eyebrows, you got a migraine that would not quit.

So…I removed the smoke units (real handy when I converted all my 675 steamers to 225E boilers which, being pre-war, had no provision, ever, for smoke) or just cut the wire.

There are no smokers left…well, wait…there is a baby Hudson I picked up (free), 2055 or 665 style (memory on the numbers) that I may not have cut yet, as it isn’t in service yet. 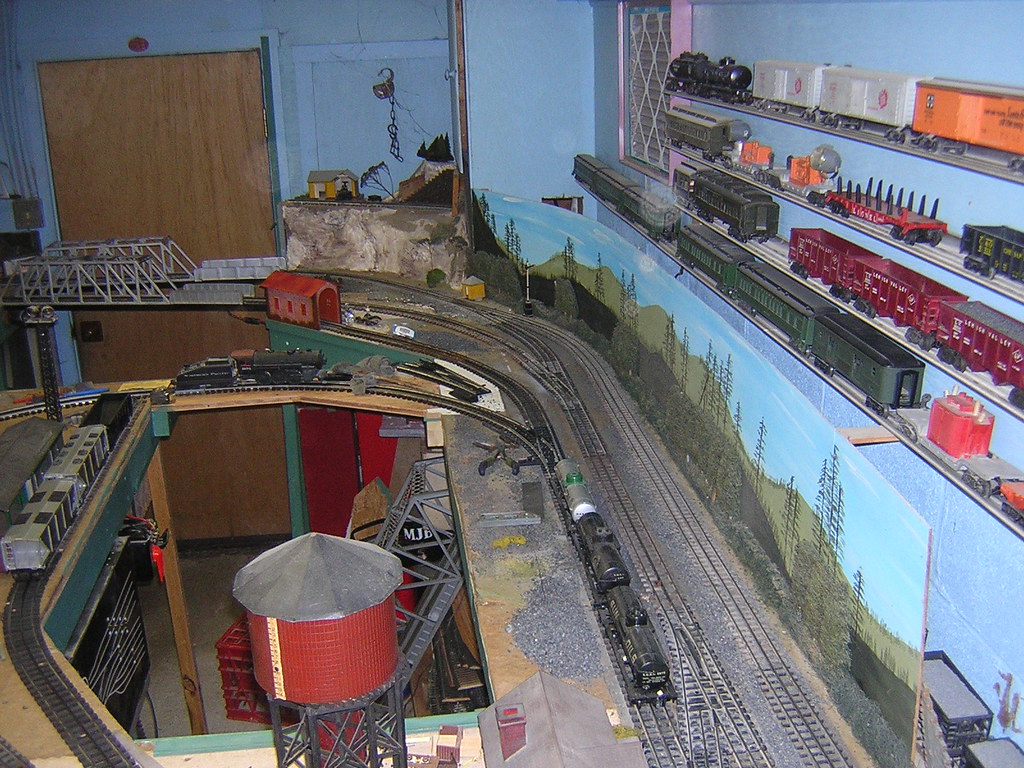 Rebuilt NW corner, now double-tracked with approach crossovers. The original (small, Bowser) turntable fit about where the brick shed is, yard extended down the left side of the photo. 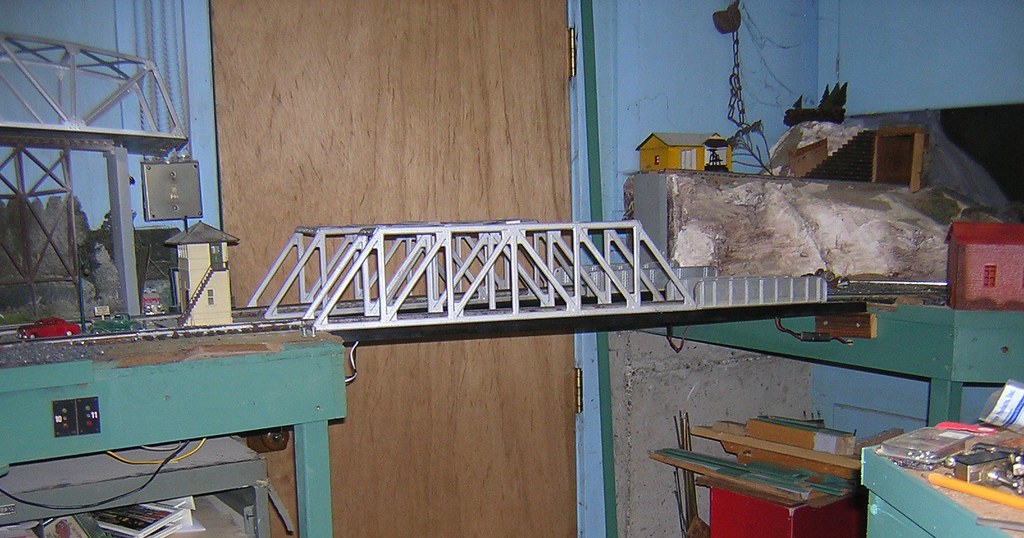 The bridges across the outside access door (there are stairs for inside access). Closest bridge is new. This allows full double track all the way around. 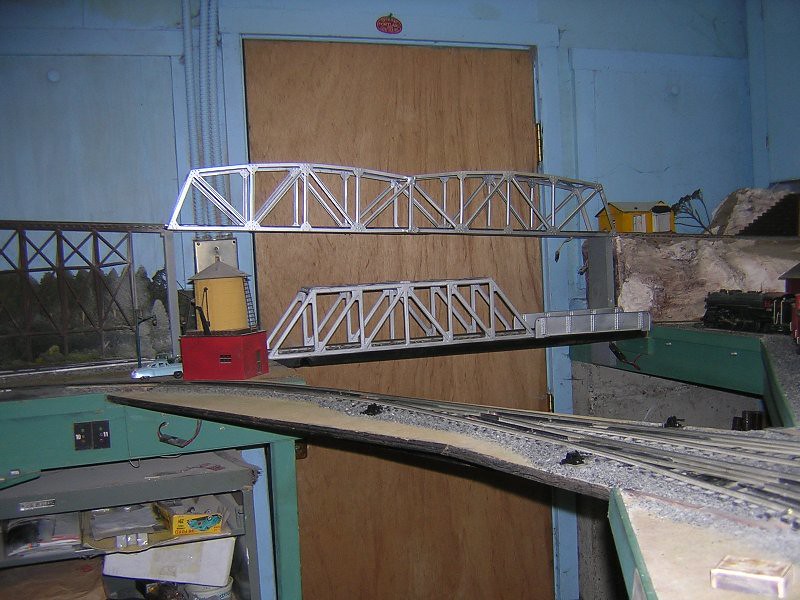 This is an early shot, showing mine branch bridge slung into place, single tracked main, and BIG lift out for yard access (yard extended down the right off screen). At the far right you can see a steamer and the corner of the engine house fed by the Bowser turntable.

This is the new “industrial” area where the old yard was. Note the Bowser turntable in lower left of photo. Double tracked mainline bridges in place.

So, some back story. I built this railroad after the house fire 30+ years ago. The smoke damaged engines got NP paint and lettering. Not commercially done at that point. Ran into Bill, we became good friends over the years, he had a Lionel pike in a small bedroom. He helped with the scenery, saw what I did with track and wiring.

Three months ago, he called me up, said they’re moving to Tuscon, and it’s all coming out.

I have close to 500 feet of GarGraves, 51 switches, two All-Trols, couple of Geeps, couple of steamers, all the wire (about 4,000 feet), huge industrial power supplies on a board (replace the ZW) and all the signal bridges and cantilevered signals. (including one soldered from two for 4-track coverage).

I have, free, the equipment I needed to finish the basement off, so I am.

Before, roughly looking east, scanned from an old print photo I had. 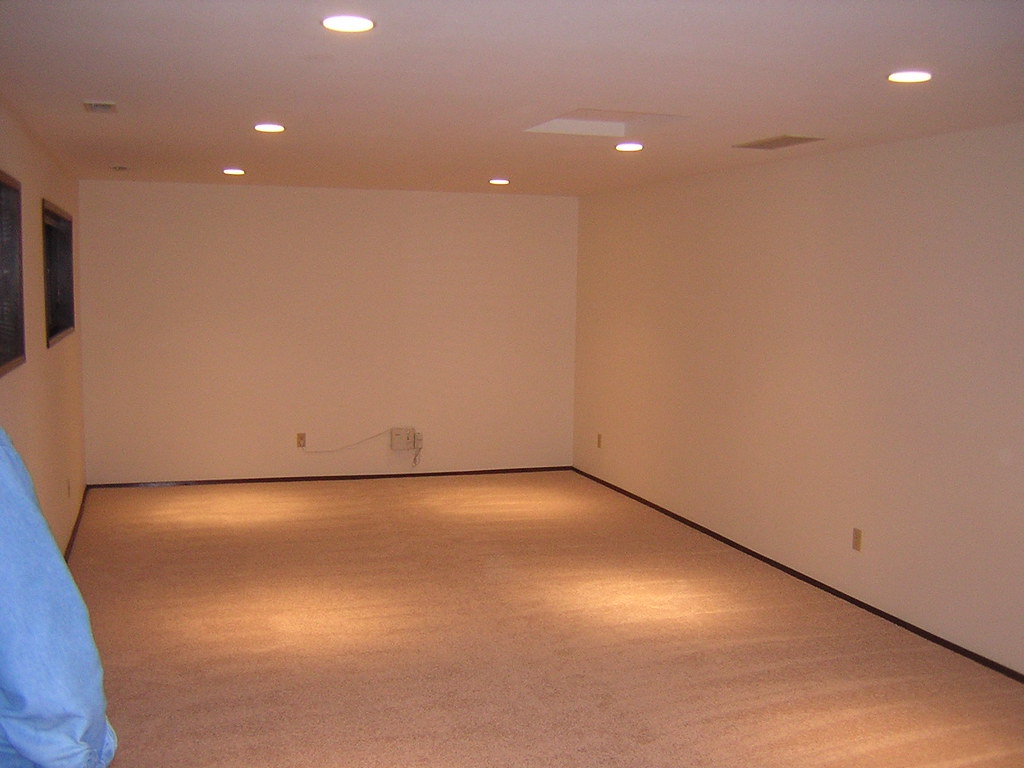 After. The fluorescent fixtures are all here, two installed so far. Realtor insisted they do can lights. Walls patched, repainted, new carpets.

We would always “loan” stuff to each other (he lived 1.9 miles away by road), so I had a couple of tenders he didn’t need, as he changed everything to make a better prototype appearance.

Last day of hauling stuff out, I find a pre-war 226E on the front seat of the Jag…asked him, since he had gotten it at York the previous October…and he said, hey, you’ve got the tender (long, die cast, six wheel trucks, with whistle) so now you have the engine, too. 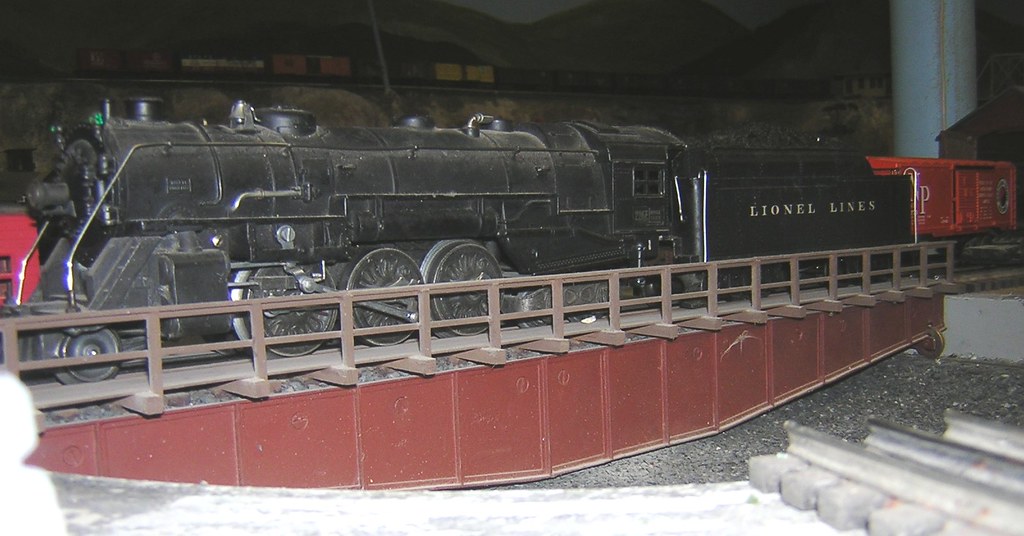 and this is it, sitting on the relocated Bowser turntable.

If you’ve got a spare 17 minutes, two videos of the railroad in service:

If you’ve got a spare 17 minutes, two videos of the railroad in service:

Very nice and quite relaxing. The trains run very well and the sound of metal wheels on metal rails is wonderful and nicely amplified in an indoor setting. Thanks for posting these gems. Doc Tom