Meanwhile, on Oahu, Something Faster than Trains

My goal of leaving the lanai clear lasted almost two weeks. To be frank, I missed having a project, so I bought the boys and I a couple rockets. Oldest Son took to that balsa airplane kit, Kid-zilla seems to have the “bug,” and I was bored. This seemed a natural project as rockets are quick, relatively cheap, and
the local hobby shop sponsors a shoot and provides all the motors.

A week ago, we took our work to the field. Kid-zilla had build an “almost ready to fly” kit almost by himself, and he was anxious to put it to flight.

He carefully selected the motor and installed the igniter… 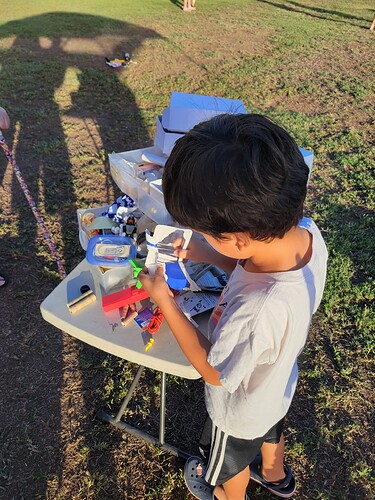 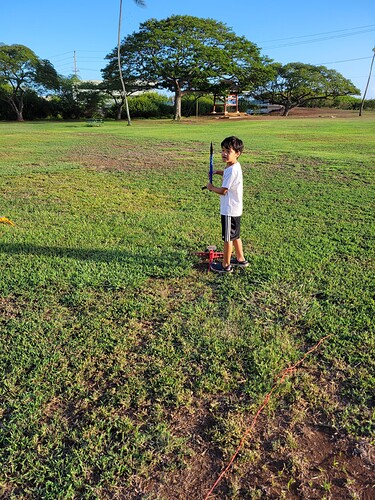 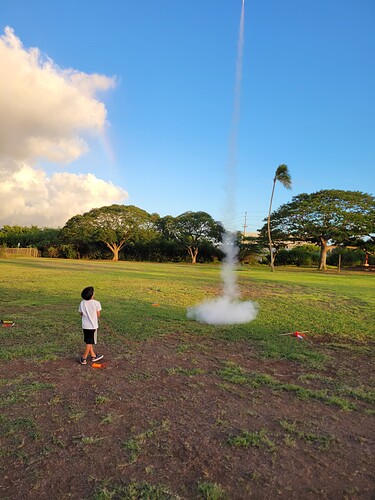 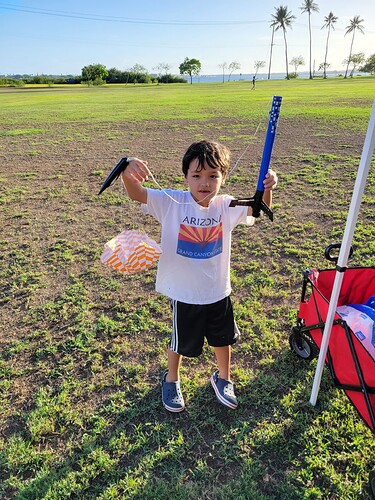 I had upped the complexity for his brother. He had to cut out the fins and spray paint the model. He learned the hard way that you have to a.) move the spray can and b.) not be too close. This lesson gave him the opportunity to sand down and paint his rocket a second and third time. He also learned that the instructions for use are correct and that maybe, in fact, his father knows a thing or two. Paint job aside, Oldest Son’s Extreme made it to the launch pad (black rocket on forward launch pad)… 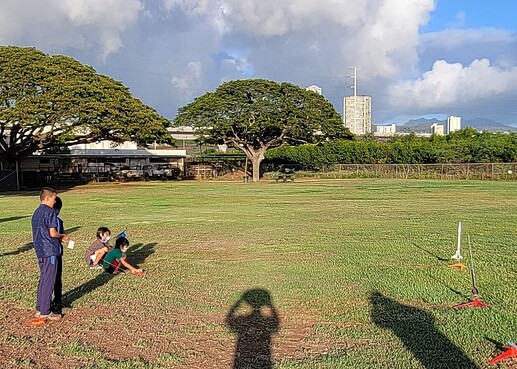 I had bought a higher end kit just to show these kids how things are done. The Interceptor is a re-run of an Estes “classic.” I had spent a lot of time sealing it up and puttering with decals and was pretty proud of my work. In fact, I made the boys carry our launch paraphenalia so I could proudly stride across the parke with Interceptor and take my turn on the launch line. 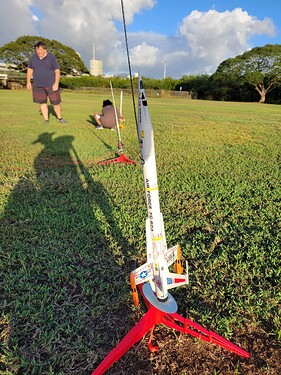 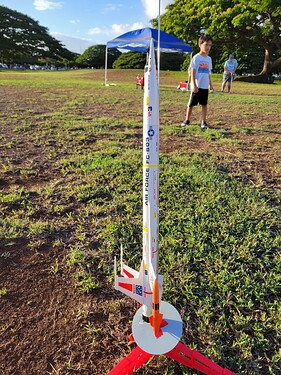 Video: Pride Going Before the Fall

To boot, my underwear is now exposed to all mankind. At least Interceptor’s first…and last…flight looked nice. There was only one response to this…buy another one. Interceptor II will be my last project for 2022…I promise!

Have a Great Weekend!

Someone adjusted for the wind a little too much, years and years ago , my older brother bought and built a large intricate Estes model and forgot to tighten the launch pad, with more devastating results, just enough angle to catch the eaves of the building we were next to, (our old shop, no damage to it) but the rocket was pretty well reduces to scrap pieces. Second note , when they say a 2 stage rocket goes really high, they mean it, it went out of sight and even with a streamer instead of a paprachute it took a while to see it coming back and was a walk to get to.
Funny story, I worked at a dairy for several years, and the owners kid got some rockets, launched one from a safe area, and it went slightly better arc than your rocket, and landed in one of the cow pens, as we were trying to locate it, pretty easy as a large circle of milk cows were looking at it from about 10 feet away,the pens bull wandered through the crowd of his ladies, and as we watched he sniffed it then ground it into the ground with his head! oh well!

Oh yes the rocket bug. I’ve been waiting for the right time to introduce my boys to the rocket bug so maybe this is the motivation I need. The 8 and 6 yld might be able to handle construction better than the 3 yld. But Dad wants to have fun too!

My coolest rocket I had as a kid was a rocket with a glider attached. When the nose cone blew off, it released the glider. Had a few successful flights before the glider ended up in pieces…

MAYBE faster than trains! Never had enough straight track to see how fast it would go! 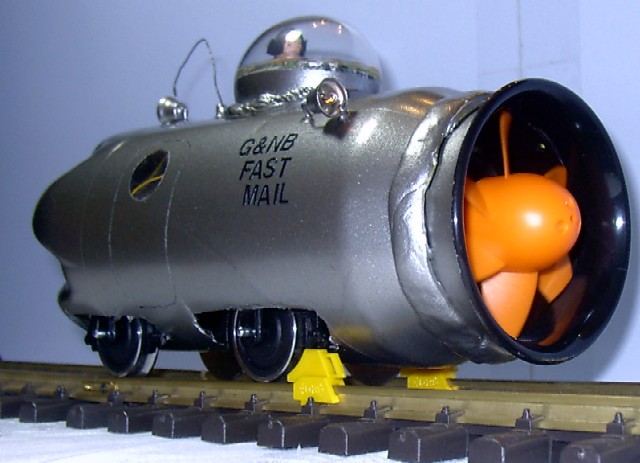 Picked up a used LGB Snoopy at a train show once. Had to station a catcher at each corner of the Gateway Garden Railroad Club layout. Late in the show, we’d get it out and play catch. Or almost catch. It lasted a number of years. It would do great on the straight aways and if a guy was quick at the throttle, it would make the curves. Sometimes. I actually think I sold it for more than I paid for it. Old memories, great times.

To keep this on topic. Had a high school friend that was in to rockets and I accompanied him, many times, to launches. These were in the days after Sputnik and before John Glenn. Wow! Kind of sets an age doesn’t it?

Craig, Estes has a number of kits these days that are pre-painted with pre-formed fin sections and pre-formed motor mounts. Literally, you just need some glue and 15 minutes. I built one with my oldest, and he taught his brother to build the other one. Even if that is too much for the 3 year old, it won’t be much investment in your time or his brothers’ time for him to have is own rocket.

Wow! Kind of sets an age doesn’t it?

I got my first rocket in 1980. I still have one fin; the rest rotted away in the top of a tree. I was in and out of the hobby for about 10 years, then let it lay fallow until 2016, when I helped the kids with some simple kits. We did a single shoot, only to lose a high-school era rocket in Kawainui Marsh. I like to think it was an offering to Hauwahine, the marsh’s guardian spirit!

Flash forward to COVID, and I had to find ways to keep the crew occupied, and this year we were finally able to start launching. The park near the hobby shop is a bit more rocket friendly, though one guy got to watch his drift out into Pearl Harbor as an onlooker exclaimed, “Oh! Isn’t that beautiful to watch it sail out into a Hawaiian sunset?”

The hard part of this little side hobby is accepting that these models are ephemeral. They will crash, blow-up, burn, hang in a tree, drift off to sea, etc. I cannot simply slap it together, yet I know that hours of work may culminate in a single flight. This is an emotional compromise base on aesthetics and personal pride. This much more difficult for me, anyway, than the intellectual compromises in terms of detail and scale I make in my / our railroad projects to ensure they can withstand the environment for years at a time.

Somebody used to make a rocket that held some water, then was pumped up with air pressure (cheap air pump) 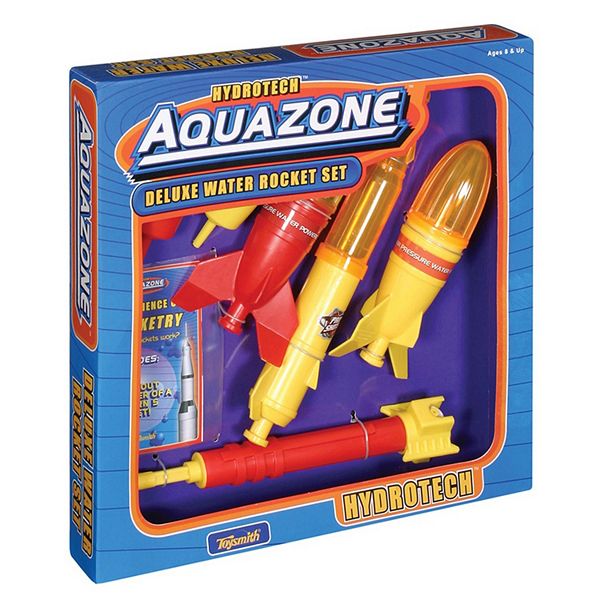 Edit to add still available at a number of locations

Yeah, like that. Daughters now in their late 40’s. Not sure they would still want to play like that.

Who knows, Eric, maybe your kids might combine the hobbies… 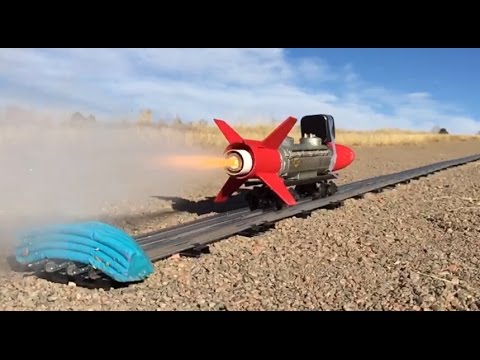 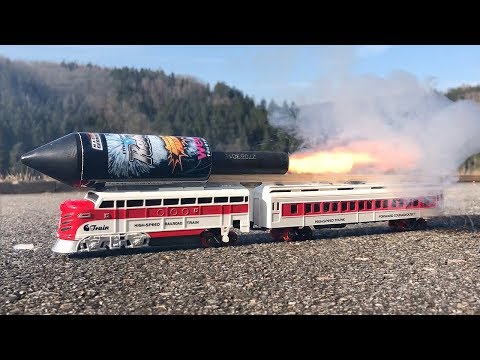 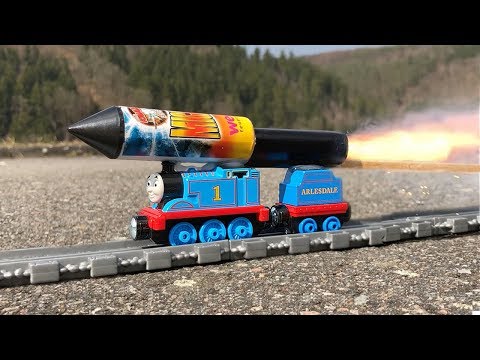 And of course, there’s a prototype for everything… 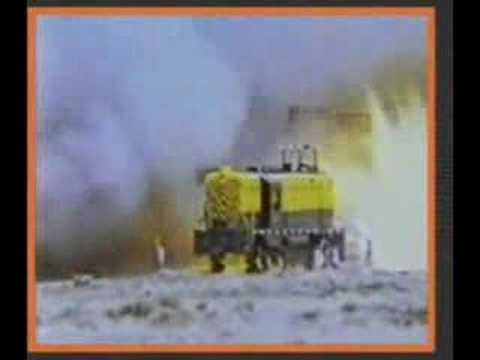 Video: Pride Going Before the Fall

To boot, my underwear is now exposed to all mankind.

Have a Great Weekend!

Didn’t notice till you brought it up and that’s not underware anyway! They are clearly “bloomers” hanging out the back of your shorts!..“Now” mankind is wondering how you are going to explain this to your children !

Many years ago we had a pine car derby as a team building event where I worked. Unlike the Cub Scouts, we were allowed to power our cars. A friend tried a CO2 capsule. Didn’t work too well. The CO2 capsule and the car decided to part ways.

I used a DC motor, a 9V battery, and a three-bladed model airplane propeller. MUCH better control! 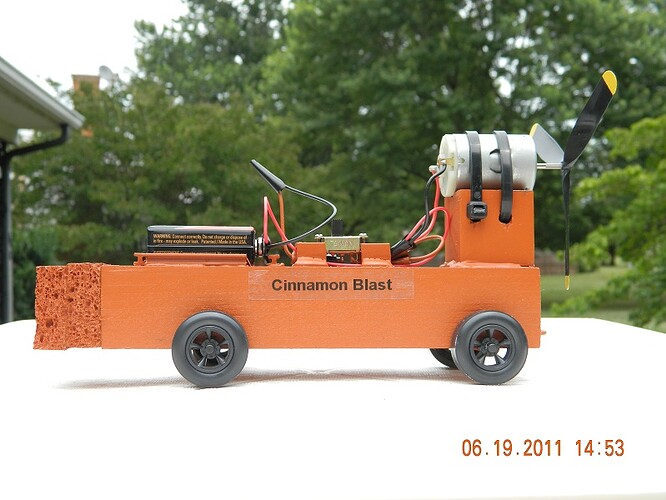 An unusual load emerges from a secret underground facility. The company books will cover this as “Miscellaneous goods.” 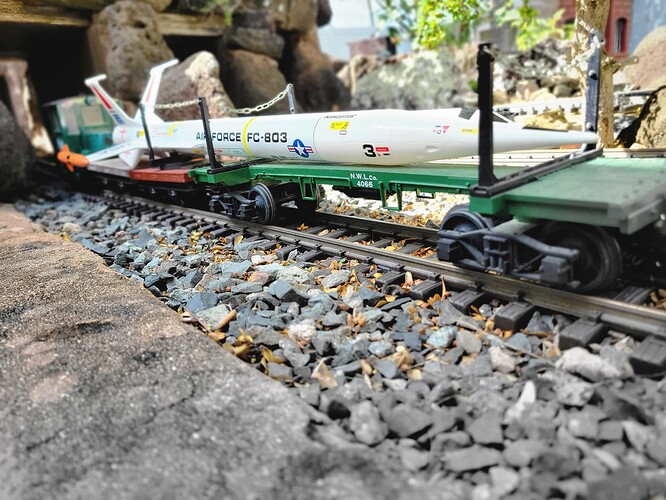 What time today will it be launched?

@Joe_Zullo , should be about 1645 Hawaii Standard Time today. And, yes, it is a mean looking thing, isn’t it? Launchsite is Dillingham Park. The boys rebuilt a couple shelf-finds my siblings assembled in the late '80s. 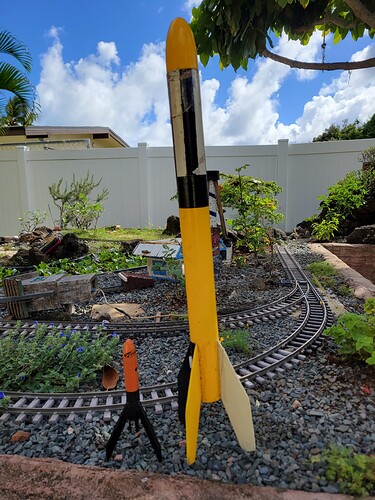 Both are on the launch schedule today for the first time since perhaps 1991 along with one of my own from the era that mounts a 110 mm camera. The latter never flew. And, yes, I still had the film!

To bring this thread to a close, more or less, winds prevented the double launch of a 2020 and 1988 Big Bertha as well as the launch of the camera rocket. Too bad! The descent of every kid in the park to the site meant that pretty much everything else went airborne, though.

Oldest Son and Kid-zilla both invited buddies, which was fun, and the two of them helped to integrate their friends and the self-invited masses into the line-up, graciously sharing some of their more robust almost-ready-to-fly rockets with these unknown kids.

O.S. helped his buddy load my sisters’ 1980’s refugee and send it skyward. BLAM! He plans to tape it up and retire it to the ceiling with some of the other Ancients.

Kid-zilla had made the aptly named Mosquito. 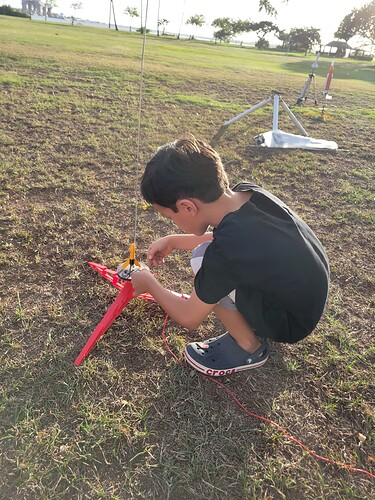 Astron Scout, the little orange and black rocket in the previous post, survived with some damage and scorching. She will be retired.

And Interceptor II? The trades kept coming and going, and I had to wait for windows to sneak Interceptor II into the launch cycle. Most of the launcher batteries were starting to go dead, and I had to abort two launches. At the end of the evening, it was time to send her skyward (video). The wind caught the parachute, and she just cleared that tree!

The hobby shop provided motors, and they even provided kits! The masses left a half dozen or so partially build almost-ready-to-fly kits around the site which our boys and their friends gladly salvaged. The proprietor also gave each of them a kit for helping to break down the site. I do hope these were Estes’ promotional materials!

This has been fun, but I am ready to return to the railroad. There are some things that are startig to grate on me, and I just have the itch. The boys, however, cannot wait to tear into the new and salvaged rockets. I told them, “Sure, but first the Mik!”