I am starting the build log for my railroad now. Prep work has begun for the build, so I wanted to start documenting my story.

First, a little back story. My wife and I have finally ended up in our ‘final’ home about 4 months ago. We sold our big house about 5 years ago when 3 out of 4 kids had moved out. She was set to inherit her parents house which she was in love with. An added bonus, it has a nice big backyard for me to play in. So while we waited, we rented a small house nearby. About 6 months ago, the in-laws decided they wanted a new house, so we had the option of jumping on their old one a lot sooner than planned. The downside was, I had to buy it instead on inheriting it. So we scraped the funds together and 4 months ago it became ours. Now I can begin to get serious about my railroad.

Move forward to August, I am starting to catch up with the stuff I had to do in the house right away. Some of it was needed, some of it was ‘desired’. Over the past few months, I have stood outside from time to time, contemplating my railroad. I walked around with some sections of flex track to help me envision things.

For the remainder of 2017, my plans are to get a good solid plan done, as well as do some much needed prep work to the yard. I need to do some work to my garden shed. I have a flower bed to remove. Part of the yard needs to be tilled and smoothed out (ruts). There are also some yard areas to work on that are not directly related to the railroad construction.

The yard from the south corner of the house, looking west. The property runs about 75’ west from this point (to the bush behind the tree), and about 75’ to the north to the other side of the shed. Standing by the shed, looking back toward the original photo location. The flower bed in the foreground is the one to be removed. You can see the remnants of the woody bush i cut out a few days ago. Now the stump needs pulled. 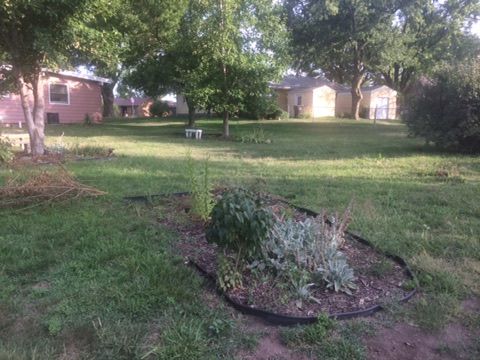 Rough idea of where the mainline will run. 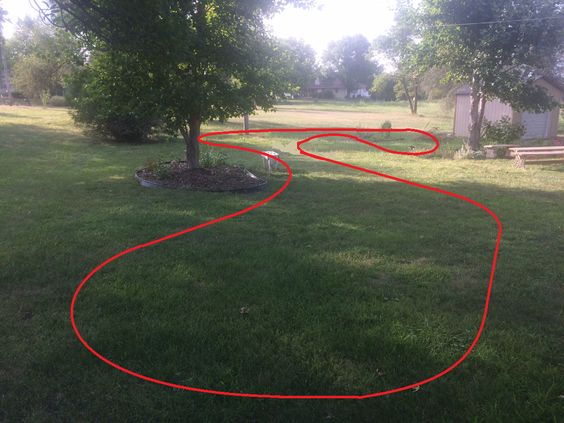 Looks like you have a rough idea of what will go where and room for expansion if wanted and needed. Are you going to build it up or ground level?

I plan to build it on elevated bench work similar to the way Richard Smith built his Port Orford Coast. Over the past few years of visiting other’s layouts, and talking to people I have found that being on the ground gets old in direct correlation with how old you get. This fall I’m going to build a test piece to determine rail height, but right now I’m thinking 42". The yard runs downhill from the southeast corner (where the first picture was taken) toward the garden shed. I plan to maintain the 42" height instead of leveling the track. That way I have a little bit of grade already built in.

When I stand still too long, my right leg goes numb. I raised my layout to a comfortable folding chair height. On the Western end it’s above my thighs and the East is below.

It’s handy to have benches be at the right height for visitors.

I elevated, to stop the critters from burying my track, it’s been great! My caliche (clay) rich 1/2" of rocky dirt has weathered 10 weeks of the afternoon monsoonal cloud burst. 1" trim boards set the dirt depth. Mainline, on left, is up on ballast and siding is sinking into the dirt … (http://www.largescalecentral.com/externals/tinymce/plugins/emoticons/img/smiley-laughing.gif)

Thanks for the input John. I based that height solely on what Richard said his height range (40-48") is on the POC. That is why I’m going to build a test piece to play with actual height. What my goal is, to have the rail slightly below eye level when you are sitting, but still at a comfortable height when you are standing working on the RR.

The old Flower Bed and I had a throw down tonight. I could tell right away the stump for the woody bush was going to be trouble. I tried to negotiate with it, but to no avail. So, after a few harsh words were exchanged I called in Tommy Two Guns and Jimmy the Snake and handled it the old fashioned way. The rest of it came up pretty easy. Unfortunately I was not able to save and transplant all of the plants I wanted. The bed has been there for about 8 years, and they had become to entangled with the weed fabric. Saturday I plan to finish removing any leftover weed fabric, and then till the ground so I can begin to reclaim it for future railroad use.

Leona Timber Co. will be planned in what circa?

I’m aiming for the 1930’s Rooster. Narrow Gauge in the Rockies somewhere. The theme will be mainly lumber and mining, but there will also be limited passenger and freight service.

John had me thinking all day (when I was supposed to be working) about layout height. The answer finally hit me at supper time. After our meal, i brought a piece of flex track and my shay into the kitchen and set it up on the counter and sat down and stared at it for a while.

After enduring several insults from my wife, I came to the conclusion that the kitchen counter height of 37" was perfect for my rail height. It gave the viewing angle that I want when sitting, and the comfort of working when standing.

That’s the height I chose for my elevated layout too, except I chose to maintain level so one section of the loop is a bit higher from grade. I live on a mountain slope so it was necessary. I also didn’t dig any post holes for the uprights as Richard Smith did. Instead, I used concrete deck piers to set the posts in. Worked well, and very stable. Also saved my back from digging in rocky soil. One recommendation, consider building a wider segment along the layout to accommodate a town site or whatever. I limited my construction to 32" and now am planning to add a wider segment adjacent to an existing segment for a more realistic town site rather than a “string town” close along the rails. You’ll really enjoy it when done.

Check some of my past posts and you’ll see how I built mine.

After a bit of delay, round 1 of the tilling work was done tonight. This was initial breaking of the ground, which with a front tine tiller is a LOAD of fun. I have to expand out a bit from where the old flower bed was to help me level it all out. I am also running a strip about 6 foot wide across the back of the proper to remove some ruts. Will be back after it tomorrow. 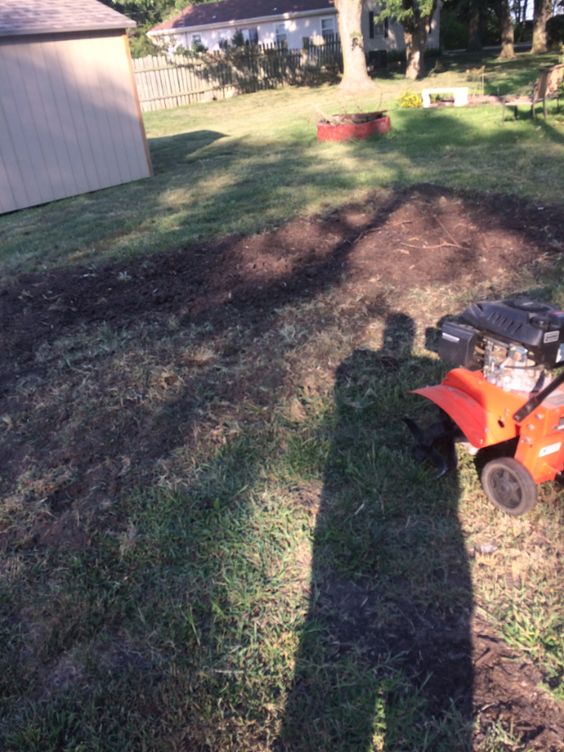 Not part of the railroad area, but Grandson #2 helped me dig out the old barrel planter this morning. Which immediate disintegrated as soon as I picked it up. 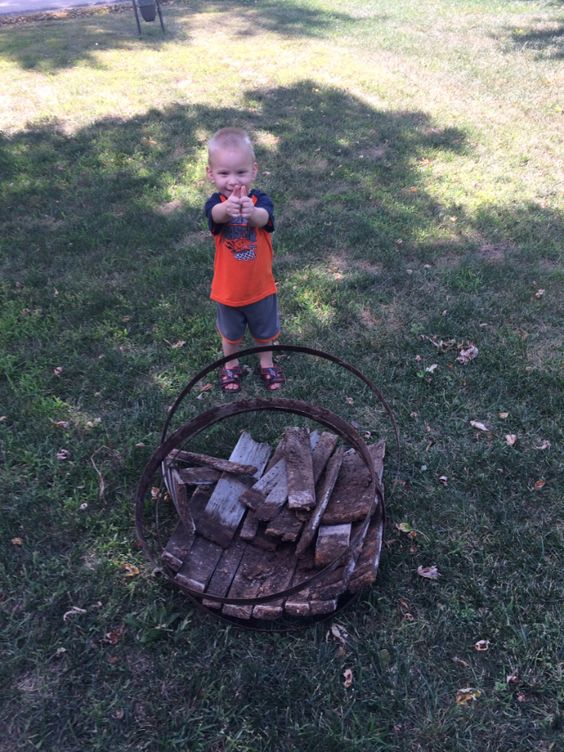 It’s gonna be nice! When can we expect the first open house? Be careful before you answer … this crowd can get pretty rowdy if you miss a self-imposed deadline!

Great ideas! Thanks for sharing.

My first open house will be on a day that ends in Y. 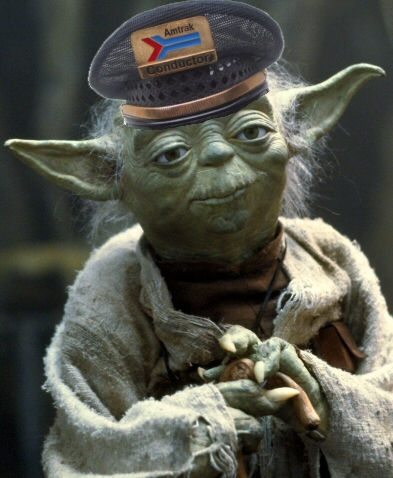 Ahhhh…grandson #2 is an Amtrak fan …I can sense it !

Grandson 2, Amtrak fan he is.

Most definitely NOT an Amtrak fan! Will only be a fan of the fire breathing steamers! 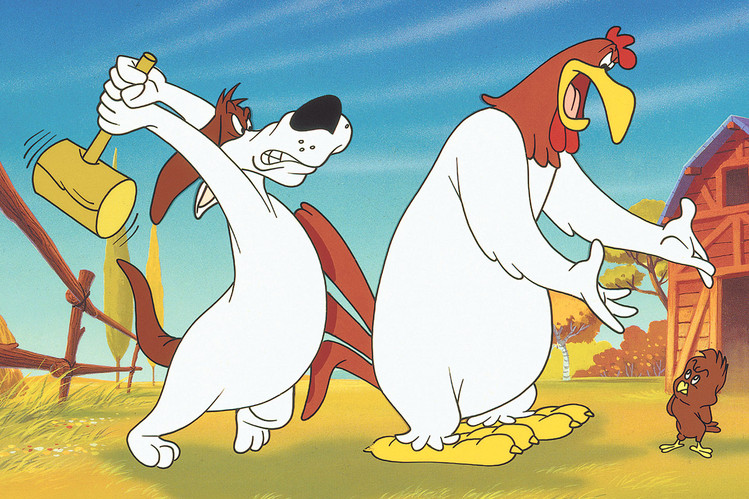