Fred, I began this design years ago, and bought these lanterns back then to do exactly what I’m showing – including cutting a 3.5" hole in the bottom and installing downlights. All else is sealing and wiring.

[edit] BTW, these were the cheapest possible, in every sense of the term. $9 each for something you’d never wish to light up, because of leaking. But I bought them to be lampshades, which I think they look fine for.

A small boring update, fwiw. I’ve been pecking away at filling and sealing the chimneys and arms: tedious and not pretty!

The spray foam filler in the arms crept out of many tiny holes; and to get the spray foam in the arms, I needed to drill holes. And there were many slots related to the cage pieces I remove.

So, lots of holes to be permanently filled (with JB Weld) after the foam leaks were broken off. 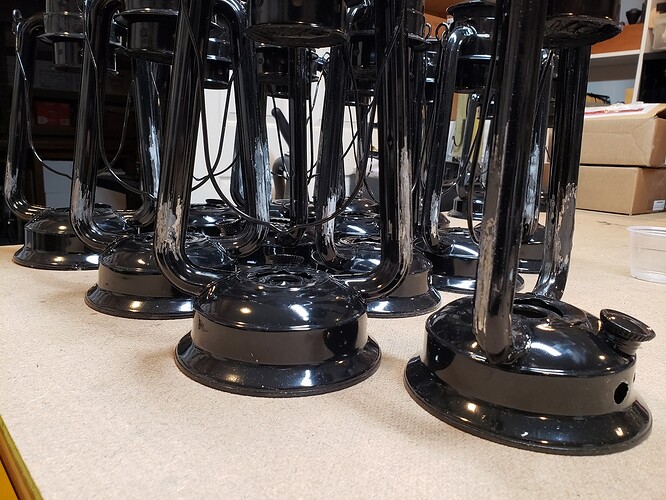 After final sanding, the next step is repainting, then assembly and wiring, and more.

After final painting and some pre-assembly, here’s what all the bits looked like yesterday. 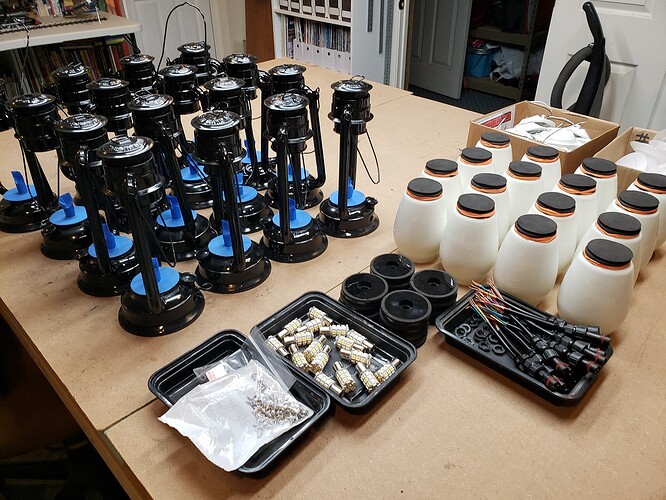 The wiring was pretty simple, just hooking up the two lights to the 4-wire connector… 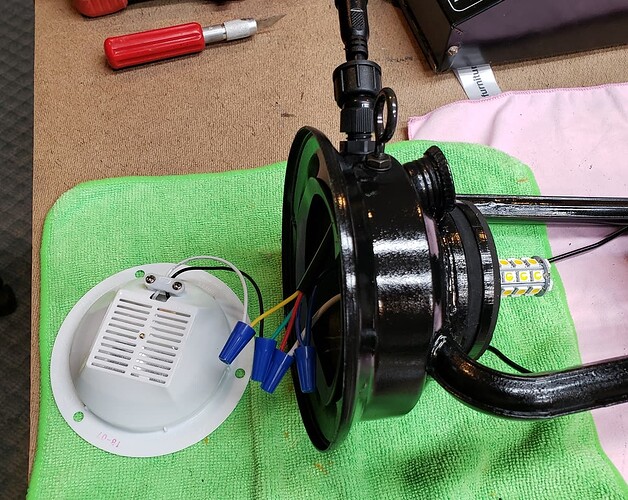 …and making sure they worked. 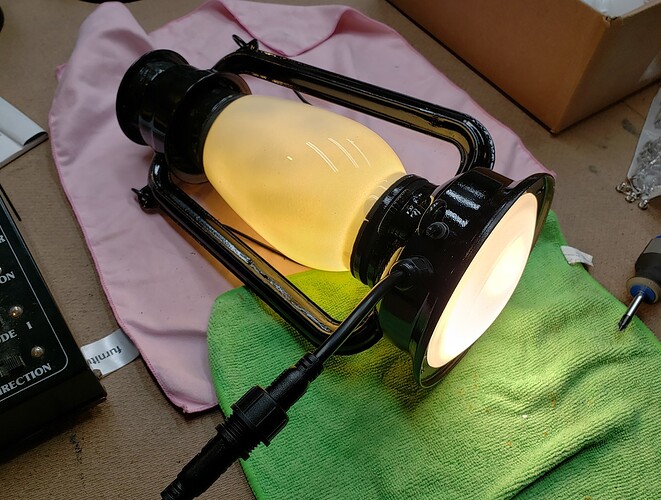 I checked the current draw with half the units, to determine the power supply needed. 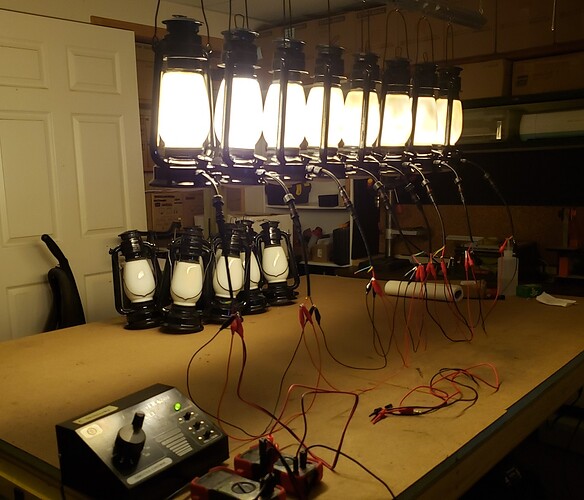 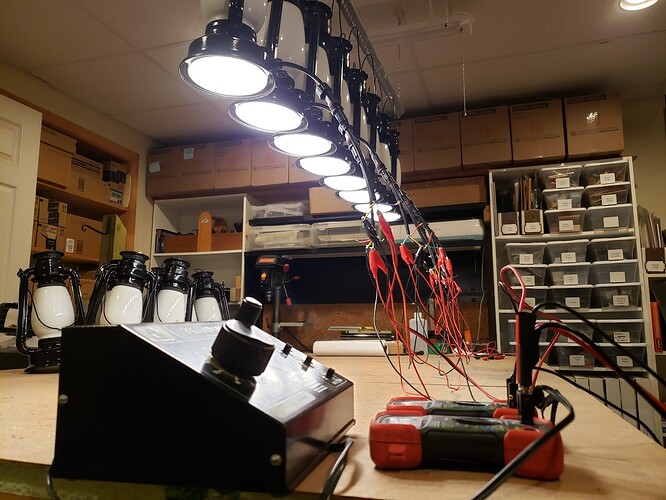 That’s about it. I’m putting a fork in this for now, until installation in the spring.

They look great Cliff. What voltage/current are you needing? Meanwell makes some nice compact 12V supplies with a lot of umph. We use them in some of our LED signs. Google has a bunch of sources.

Thanks Jon. They’re all 12v. And you bet, I have a few power supplies already, most from Amazon. Great selection for sure!

But, since you asked…

the problem is my X10 system, in that I’m testing different power supplies to see if any can be dimmed with an X10 dimmer. Most won’t; they try to put out constant voltage. Although a dirt-simple wall wart seems to work, I don’t have one with enough capacity. My last resorts are a more powerful cheapo wall wart, and also a “dimmable” LED driver, both coming tomorrow. I’ll use them on other projects if they don’t work. And if all else fails, I’ll just use the X10 to switch the the lanterns on and off.

Most kind of you, Doc, thanks!

Sounds good. Does the X10 dimmer simply reduce the input voltage? If so, probably why it’s not working. Most of these supplies have a wide range of input voltage.

When poking around the Mean Well website I did notice that they make a PS line with dimmer inputs. The dimmer input can be variable DC 0-10V, PWM or simple resistance. Probably wouldn’t help with the X10.

The other problem, which pretty much woke me up last night, was our old friend Mr. Differential Expansion. The glass globes are fragile, and were a tiny bit smaller than my “first article” that I based dimensions on. My acrylic inserts set on the tanks and go up into the globes. These interface pieces were line-to-line with the globe ID’s. I actually had to grind the glass and/or the acrylic to make them fit.

I realized… like at 3 am, yay… that one day the temps would go up or down quickly, and the acrylic disks would win. 16 glass bombs would go off, and I’d have a glass shard laden garden (sharden?) layout.

After I got up, I yanked one of the inserts and tried to get its upper plate off. I used a flat-blade xacto and a hammer, but it finally split away, which was a relief, because I wanted to save the lower disk and gasket.

So right after work I did the same to all the inserts. Hard to explain, but basically I separated and discarded the disk circled in red, and the gasket strip around it. To the right are the salvaged bare lower disks, which have thick gaskets adhered beneath them. 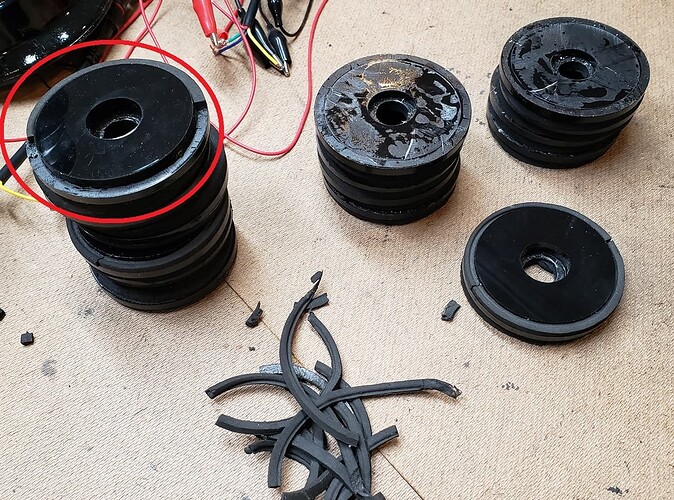 While that was happening, I recut (lasered) the upper disks but with a smaller OD. Then re-glued, re-gasketed, and reassembled all the lanterns.

I’d post a pic of that, but it’s identical to those from yesterday.

Sometimes tough fixes go completely unseen… And this is in that category. But I figure I’d post about this meaningless effort here to make it seen by someone besides me, and if you’re patient enough to read this, that’s YOU. So thanks!!

It worked! The dimmable LED driver came in this evening, and it actually worked with the X10 inductive dimming switch (XPDI3).

This has been a thorn in my foot for a long time, because the X10 people / product line are all pre-LED, and couldn’t suggest ANY LED power supply that would work with either of their two (yes, only two) dimmer types. Even Insteon (I was tempted to switch over) can’t answer it.

So I’m thrilled to finally have this working!! That means I’ll be able to remotely dim various LED circuits, two of which are involved in these lanterns.

Today I wired up the controller package which consists of the two X-10 dimmers and the two LED “drivers” (power supplies) mentioned earlier. Since the dimmers are meant to be installed in a wall box, I was forced to come up with some sort of enclosure, and here it is. 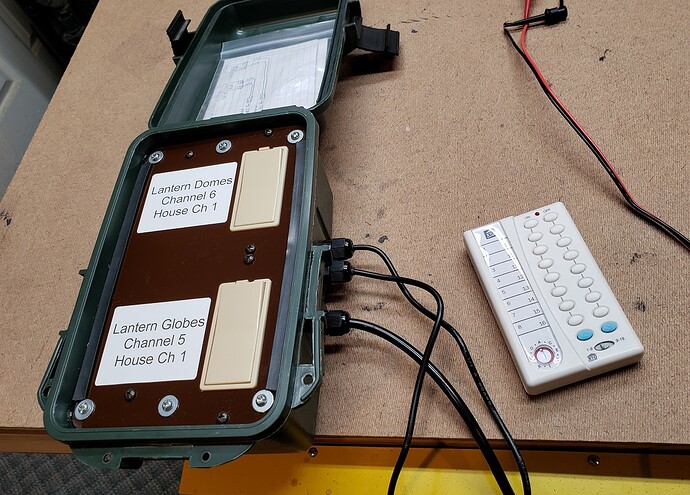 The box ain’t NEMA, but it’s waterproof (a sealed “survival” box), and will be plugged into an outlet inside a shed. The dimmers shouldn’t need much poking, since they’re remotely operated. Here’s the guts. 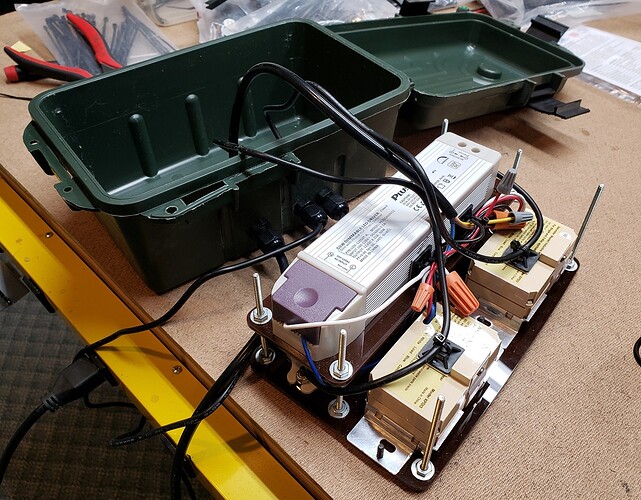 Regarding heat, once all’s installed I might put a thermometer inside after the system has run an hour or so, and decide then whether venting is needed. Until then, it’ll be a sealed box.

Here’s all the gear, gathered to make sure all the electrical stuff and hanger hardware was accounted for. 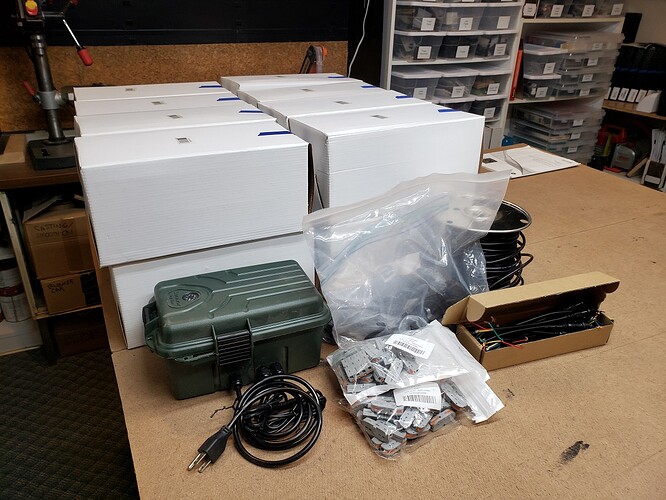 Lastly, I made up a sample cable header connection. This is using a new (to me) modular connector, to cut down on size and time involved. IMO, it seemed to bite the wires fine, and is (hopefully) cleaner and more reliable than 4 wire nuts. This will be at each lantern feed, and will be wrapped in stretch-seal silicone tape.

[edit: forgot to post the pic of this oddball connector] 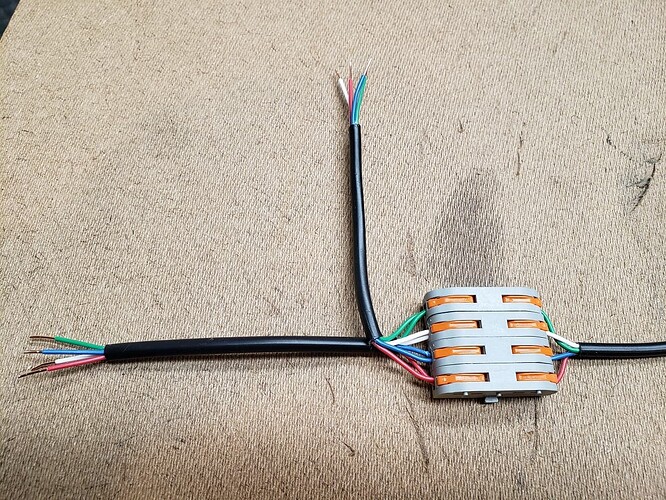 Just a note to report that installation went well, and the controller works fine.

Since the wiring for these is tied into a few railroad lanterns, I combined the concluding notes for this project with that one. Here’s the link.

Thanks for joining in with me on this project,
Cliff