Since I was young, I’ve always enjoyed messing with lighting-related projects. So a few years ago I felt inspired enough to buy a bunch of cheap hurricane-style lanterns, along with a lot of sockets and LED stuff, in hopes of creating some fun low-voltage lamp fixtures to hang about the layout.

Specifically, the lanterns would hang from posts of the deck which resides over much of the layout. Here’s an early concept, with the lantern sitting on a shelf made of pressure treated. 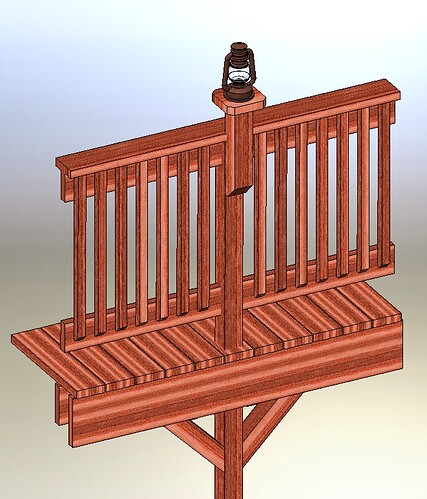 But some pitfalls became apparent:

That was all back in 2014. So for my other winter project (the first one is the Joe Douglas loco), I decided to figure out these lanterns or offload them on Ebay.

Fortunately, since 2014, some good things have happened. Lots of new products have emerged, and I’ve gotten a lot less idealistic. E.g., the lanterns no longer have to look perfect, as I will soon demonstrate. And I gave up on the faux flame bulbs…

So here’s the intended solution for the sealing, which was the main show stopper. The globe holder and cage have been removed, and the globe has a new acrylic base. The tank has a new acrylic platform which holds the socket, which will be sealed to the tank. Self-adhesive foam sheet forms the seal between the new tank top and globe bottom.

Above the globe will be a gasket of (closed-cell) self-adhesive foam sheet, with layers of differing diameters that help it index into the globe below and the chimney above. 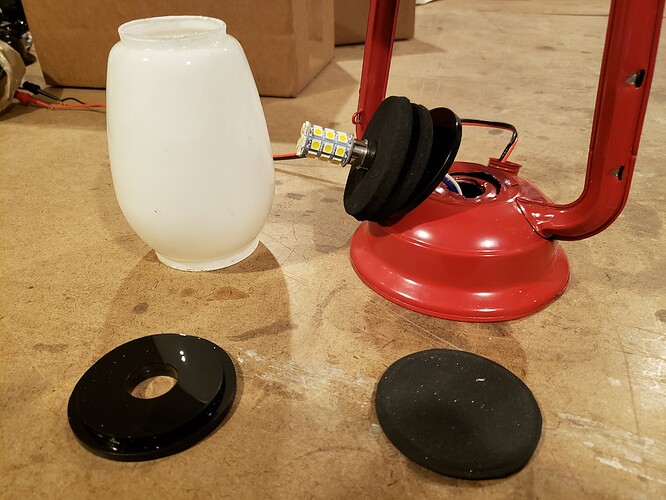 The spring action of the chimney compresses the gaskets and holds all together.

The entire chimney area will be filled with (I think) RTV silicone and (as a backer perhaps) expending foam. Other areas of water intrusion will also get the RTV treatment. 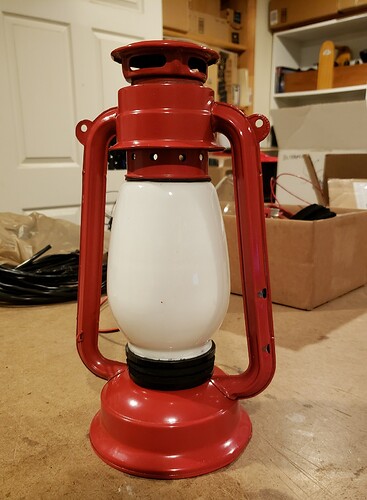 This shows how unrealistic it is… but this is the only way I can seal it all, in the time frame my give-o-crap will permit.

The downlight is an LED fixture. OK for boats, but not itself sealed. I’ll seal the tank around and over it though, and maybe do more if my gut says to. I’ll also drill drain holes in the tank bottom and the two lower bends of the arms, just to be sure. 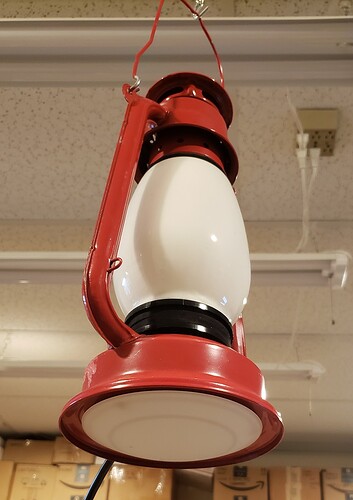 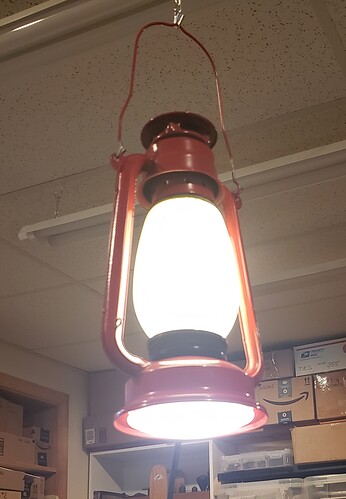 The shelf is no longer; and “wrought iron” plant hangers are now performing that function. These are fairly cheap, and found on Amazon. 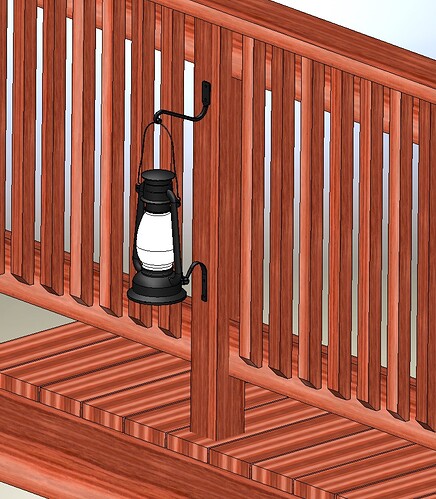 Here’s the test fixture I just rigged up, to check the theory of the two plant hangers working right, that is, like springs holding the lantern in place against the wind. And they seem to do the job. 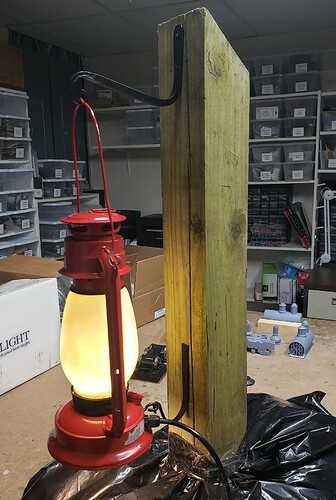 The final lanterns are black, so all will match for a couple years. After that, I’m expecting everything to rust, which is fine. And when someone remarks on the black paint flakes around the layout, I’ll just explain in great detail how that represents a by-product of all those Comstock stream engine boilers, called “flake soot.”

Neat idea, Cliff.
How big are your lanterns? (Or, do we HAVE to wait for the next post to see?

Thanks Bruce, and I can give you the measurement right now: about 12" tall.

Strange, the first time I viewed this your post was pretty short and did NOT include ANY pictures past the first one. So, I apologize for my questions.

So, WHEN do they go outside? (It almost seems a shame to put them out now, perhaps the spring?

Heh. as IF I know anything!)

Haha! Yeah, it was such a long post that I felt a need to save it and go back a few times.

I’m glad you like 'em Bruce, even without the globe cages.

And you got it, next spring is the plan. This winter’s project is getting the fixtures done, the wiring / equipment on hand, and a plan in place for the warmer weather.

Nice.
Will you be running the trains at night? Or, just enjoying the light?

Hmmm… Well, that’s the theory, at least. I mean, the more comfortable / fun we make it out there, the more we’ll enjoy it. At the moment, we don’t go out much at all after sunset, so hopefully this will nudge us out. In warmer weather. Probably right after DST ends. We’ll see.

Just for the record, OLD folks NEVER send anyone outside in the winter! Sure, I took pictures ONE year, but after THAT one time, it was INSIDE where it’s warm.

Very nice work, and ideas, Cliff…I’m always interested in “Lanterns”, and keep looking at a simple way of getting rid of dependence on Kerosene, or lamp oil. LEDs are obviously the answer; with connection to 110 power, preferable over rechargeable batteries, or “Sun Power”.
Bruce…I’m with you on the “Old Folks” statement. Winter is time for the indoor part of our LS hobby…where Fall starts the maintenance, and preparation for next year’s OPERATIONS. I have no interest in becoming a “Snow Bird”; preferring to spend my Winter looking out at the fresh clean snow, and staying at home working on my hobby, in preparation for the New Year.
Fred Mills

Nice conversion! Funny, the texture you used on the deck looks exactly like the 1970’s indoor/outdoor on my basement train room floor!

very cool. I have been wanting to do something similar. Now I have a pattern to copy

Last weekend I started in with this project again, with the hope of getting the lanterns built for a springtime install. Or summer. Well, fall’s sounding good too. But they need finishing.

Since last November I’ve finalized the design and accumulated the materials. For the electrical, I finally decided on two separate circuits, one for the downlights and one for the globe lights. That meant 4-wire cable and connectors to the lantern. Here’s all the bits. 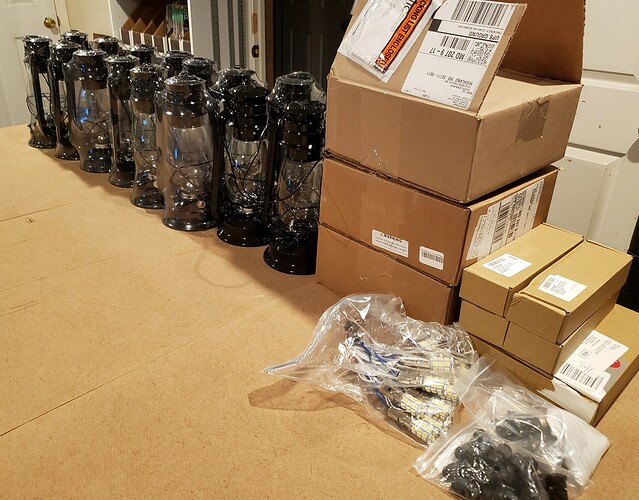 The first step was kinda easy, but it took all last Sunday cuz of the quantity! Basically packing up the globes, and stripping out the burner & cage from the 16 lanterns. If there’s such a thing as lantern vomit, you’re probably looking at it. 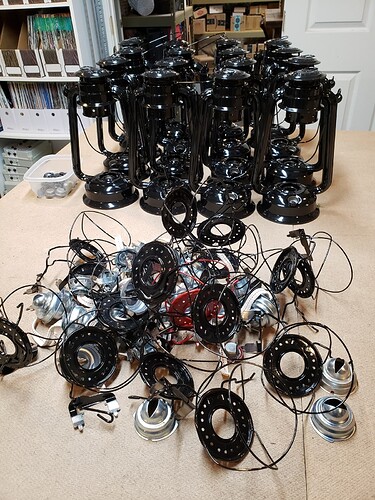 My strategy in this design is to seal everything up, so that the lighting devices have the best chance. The chimney has three rows of holes to let the smoke out, and I needed to seal them all. I’m sure there are a hundred ways to do this, and I doubt I picked the best.

But here goes. First, I used electrical tape to block the three rows. The clamp arrangement lifts the chimney up against its spring to get to the middle row of holes. 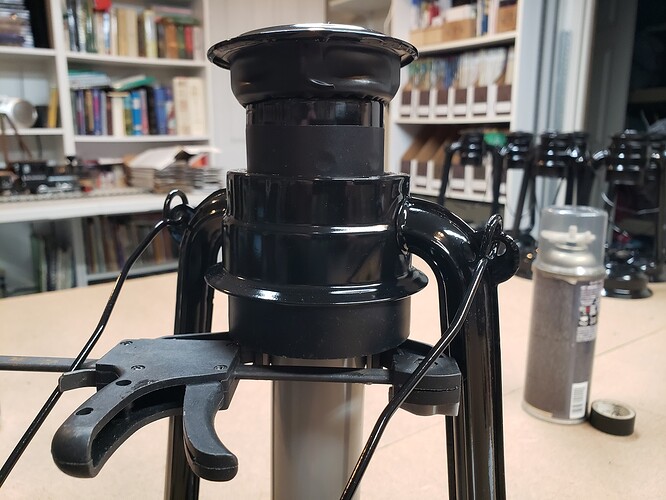 Them came swabbing a thick coat of black RTV (100% silicone) around all the chimney’s interior. 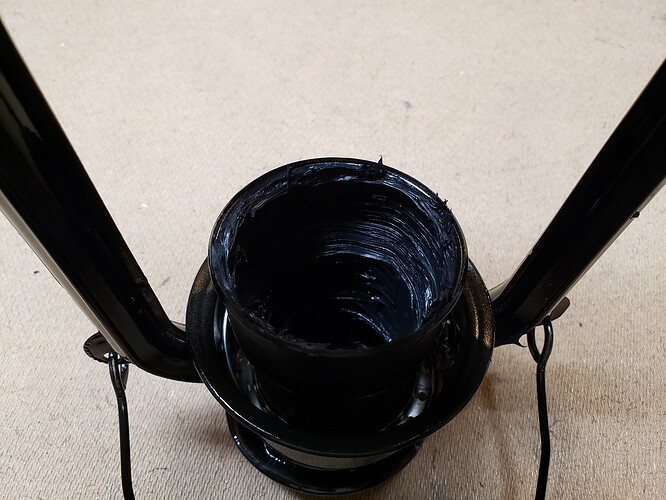 After that cured, I made some plugs from 1/2" foam board to block the next step. Which was to fill the entire chimney with outdoor landscaping spray foam. 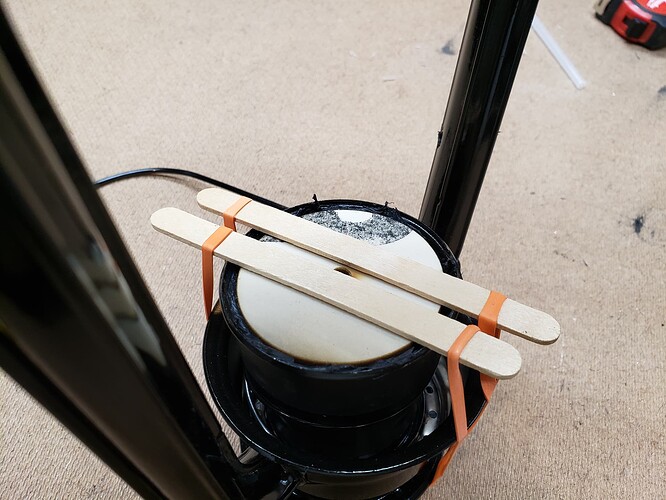 That made one heck of a mess, but it got done, and they’re curing now, in anticipation for tomorrow’s discovery of how hard those plugs will be to remove. 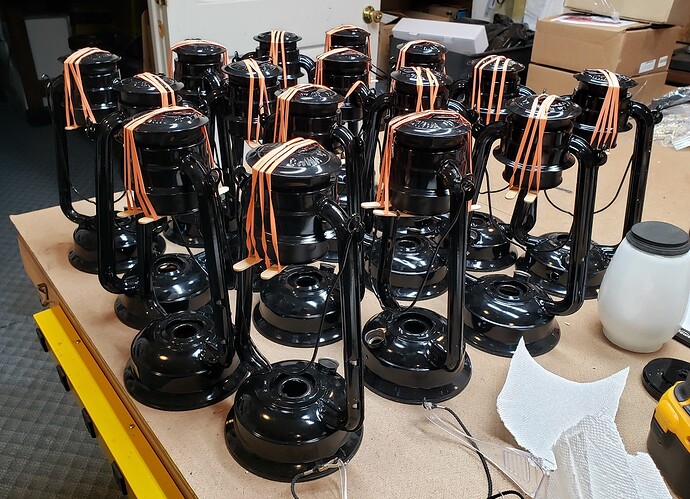 Boy, between “lantern vomit” and “Dalek-Sith-Lords” you are on a roll!

Cliff will be here all week, please try the veal. 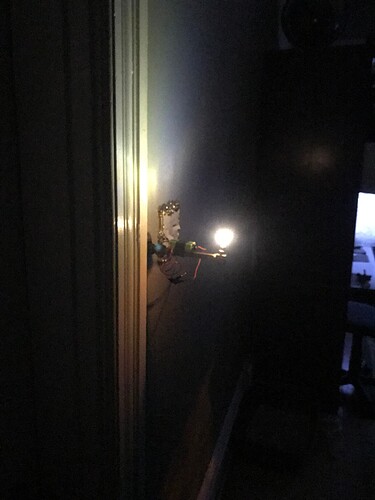 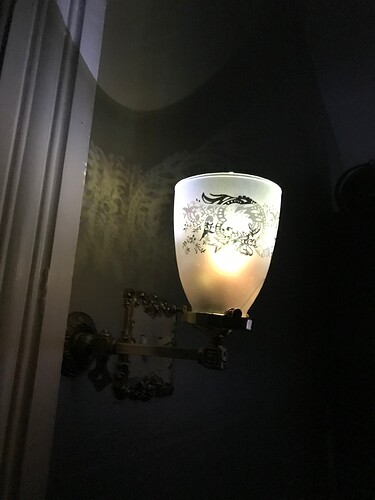 Love the old lighting look! My house had gas lights back in the day . I’m not hard wiring them but I have been playing around with using the old wall lines that are still there 1/8 NPT .
I’m using a 9v battery and a 480ohm resistor with a 5mm led inside a fitter and shade. Would love to know how to incorporate a (photo resistor, dusk to dawn) into the schematic.

Sorry to jack up the thread but I thought you might enjoy the pics.

How cool that you have the gas lights, even the fancy fixtures and globes and piping!

Any way to run a single (low voltage) power wire through the pipe, and use the pipe (brass?) as the neutral? Prob not, but fun problem. Also, if 12v, there are plenty of cheap photosensitive relay boards out there such as this, also timers and motion detectors.

“Try the veal”… That really made me laugh…

The plug-n-fill idea didn’t work at all. I removed one plug, and there was nothing but void and uncured gooey spray foam behind. So I pulled them all out and squirted some foam in the chimneys without any damming. 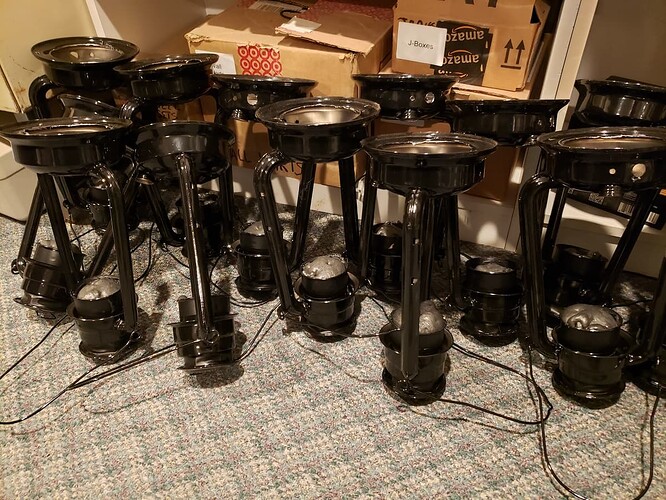 Yeah, it’ll be fun carving it all out. But WTH.

Earlier in the day, I sensed they knew what was coming, and after picking them up I found most of them had taken a dump through the night. 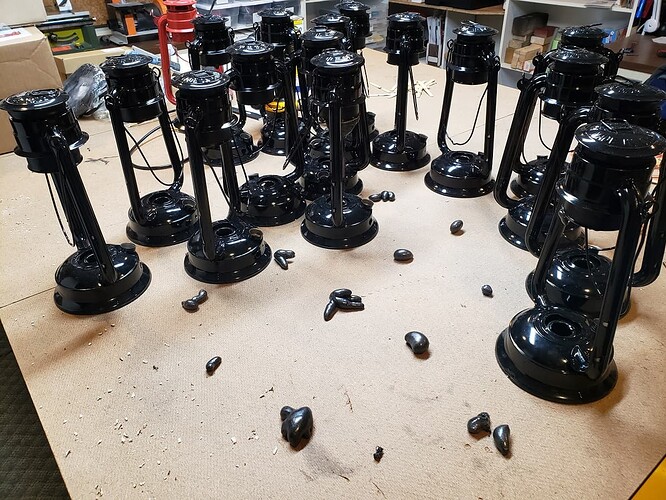 Whether it’s Sith scat or Dalek doo, I thought it in bad taste.

Boy, that is a new definition of “the dark side” and now I won’t be able to watch Star Wars without snickering.

Cliffy, Cliffy, Cliffy…why are you ripping apart perfectly good NEW lanterns for ?
I do understand converting them to electricity, and LED bulbs, but why do it in such a labor intensive way ?
I have converted quite a few kerosene lanterns in my day, by simply removing the small burner part, and installing a socket and bulb mounted on a simple wooden block.
Yes, sealing the heat vents in the upper part to prevent water from getting in was wise, but basically the lanterns you are wrecking, will stand the weather quite well in their original form. Drilling a small hole in the bottom will prevent moisture build-up…if any water gets in.
I tried to call you, young friend, but your line is always busy…
Fred Mills

Cliffy; what you are doing reminds me of someone redesigning a perfectly functioning and successful mouse trap…