Hi all, new to the forum from Australia.

I’ve been working away over the past year or two on art work for a D&RGW 6500 narrow gauge flat car. It’s a prototype I’ve been interested in for a while and I have taken advantage of laser cutting and 3D printing to start to make a model in Fn3.

So far, I have drawn artwork and had laser cut styrene parts cut (and a timber deck), the pictures show it does goes together, but I have made a list of changes to make it better. I have also had a set of 3D prints of the trucks, and awaiting the updated version in print now. I’m also waiting on several detail parts to be 3D printed, for example, steps, grab irons, stake pockets, cut bar brackets…

The below picture is the trial laser cut, it’s a bit hard to tell form the photo, but I have only added a few rivets in the middle… many many to go. Also, the AMS trucks are just fill in until I have the narrow gauge Bettendorf’s sorted.

The next picture shows the first print of the Bettendorf’s side frames, note the journal lid is a separate print to make it easier to cast in white metal if i choose to.

Its really great to see the project finally materialise.

Looks good and Welcome Aboard.

Really nice. That something I’ve wanted to model but haven’t got around to.

Will you go crazy and extend the flat with Buckeye trucks ?

The cut styrene would be a nice craftsman kit.

looks like a well planned project. I look forward to your posting your progress. That side frame print quality is great!

Thanks for the support and kind words. Yes, I have tried to think the project through and take my time. Main reason is (and I’m glad you mentioned Bob) I am considering offering it as a kit if I get the all the customer masters required to make castings.

Rooster, Buckeye trucks are an awesome thing, and a set in Fn3 would be great one day just because we can!

It would be great if people could send me a mail to [email protected] if you would be interested in purchasing a kit when I’m finished. No pressure to purchase, but letting me know your interest will let me get in contact once I’m ready and to keep me motivated. Also letting me know will help give me an idea of costs, because casting get much cheaper per item depending how many you order.

This photo shows a 3D printed grab iron and I was really surprised how well it turned out. It’s a great material for a grab because it bends without distorting, unlike white metal castings. The catch is they are much more expensive at $3.60 US printed by Shapeways in frosted extreme detail. The rivets you can see are O scale rivets from Titchy Train Group, and no I haven’t counted how many I need yet to complete the model.

I’m sure you’ve noticed Alan Friedland’s models at G.A.L. which are mostly 1/29th - but have lots of rivets. I think he uses Tichy rivets currently, but he’s working on a punch that will take a CAD file and produce a riveted side of a model in thin styrene. http://www.thegalline.com/index.html

There’s also the couple of recent threads mentioning Archer decals - my pic of the Tichy and archer rivets is there.

You may be interested in a little history. About 10-12 years ago, Ken (Mr RGS SJD) made some 6500 series cars in resin for Warrior Run Loco Works, a store run by Clem. He probably has one of the cars sitting around, if it didn’t go in the fire. He might know where Ken got the trucks.

Yes, I know Alan Friedland’s work, he cut styrene for me for this project, he was helpful offered some great tips to help me along.

Funny thing is I have one of the Warrior Run Loco Works flats, I purchased it off eBay just after I had the first set of 3D prints arrived. The main aim of theis project was I wanted to teach myself 2D and 3D CAD and to take those skills and a made a model… doing it the hard way, but for good a learning exercise.

The below picture is a comparison picture between the Warrior Run side frame and mine for interest, I’d never done it until now.

Just to stick to sideframes for a moment . . (Your printed ones look great, by the way!)

These are the Vulcan version of the AAR steel truck frames, from the Cyclopedia:

And on an EBT car:

These are available in 1:20.3 from RY Models (Rich uses them on his EBT hoppers.) Here’s an unpainted sample, brass: I also have some Andrews versions, with an extra strap, which came from Phil Dippel. I filed off the strap to make them into Vulcans! While Phil is no longer in business, he might know where they came from. 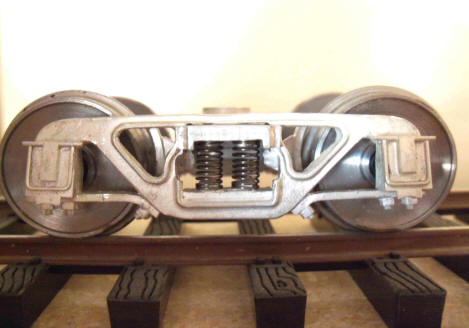 I suspect they might be a bit stronger than plastic?

Alan Thomas said: Rooster, Buckeye trucks are an awesome thing, and a set in Fn3 would be great one day just because we can!

Sloans books refers to the trucks under the 6500 flats as 4’ 11" wheelbase cast steel Bettendorf type, unfortunately that book nor others I have has a detailed drawing of the trucks. I did use the drawing within Slim Gauge Cars as the base for the 3D printed side frame, but I wish I had the prototype just up the road to understand the construction a bit more in person - I can’t claim them as 100% perfect.

The 3D printed side frames are surprising strong, mostly due to the thickness, but the aim is to use them as a master for a metal casting. As I’m after a few for myself the main driver for making castings is cost, a 3D printed truck pair comes to a total of all components is $155 US in Shapeways Frosted Ultra detail, lets hope I can do better in metal!

Many of the early Bettendorf trucks were T section Bettendorfs.

You may wish to invest in this book:

Robert, could be a birthday present! thanks.

The next picture shows the progress I made on the underbody. 5 points to the person who can pick the error in my work!

have been watching your progress, looks good. one thing to me that looks wrong with your brake rigging is that your brake cylinder seams awful small. if you send me a PM with your address I can send you a correctly scaled 1:20.3 Brake cylinder and maybe a couple of other trinkets that are not commercially available.

Well, on the right you got the ‘floating beam’ (bar that’s pivoted on the top end in your pic) linked to the cylinder and then there’s the rod to the truck brakes.

Attached is Ozark’s K brake diagram for your amusement. (Well, click this link for one you can actually see!)
/Ozark-K-brake-Diagram.jpg