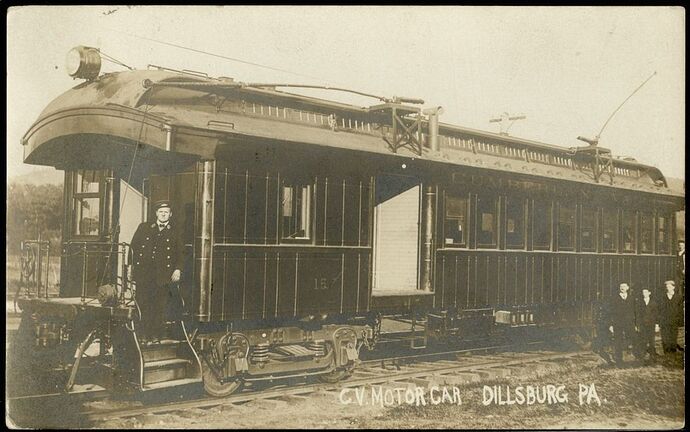 In the early 1900’s the Cumberland Valley Railroad needed a better way to transport folks cost effectively on the Dillsburg Mechanicsburg Branch of the CVRR. The ore mining which started the branch had declined greatly and passenger ridership was starting to decline as well so running daily steam service into the area was becoming costly with the exception of the Grangers Picnic at Williams Grove,PA. However “The Grange Picnic/Fair” only happened one week out of the year which was a HUGE revenue service for the CVRR and surrounding railroads. So the CVRR sent two 1880’s passenger cars to their shops in Chambersburg, PA for modification into electric service. The cars #12 and #15 were put into service in 1906. They had poles on the “sides” of the cars to pick up 600v DC catenary line which only ran down the east side of the tracks. The reason for no overhead lines/ pantographs was the steam locos going to the Grove might interfere with the overhead lines during the Grangers Fair. At one point in time they ran up to 118 trains(steam) in one day carrying 762 cars with 27,000 folks attending the Williams Grove Grangers picnic/fair.

I love my Amtrash and modern day stuff but most on LSC know that I love my history and historical research as well. So I was asked by the local museum and historical advocates what I knew about Williams Grove and the Great Grangers Picnic/Fair…Well been down many rabbit holes and still have many more to search out. However I got tired of sitting on my ass researching so I got a nut to make a representation of #15…why #15 ? Because I can bash up some Bachmann cars easily (or so I thought) and there are more pictures of #15 than #12.

So there is a short backstory and next time I will put a memo on the fridge white board! 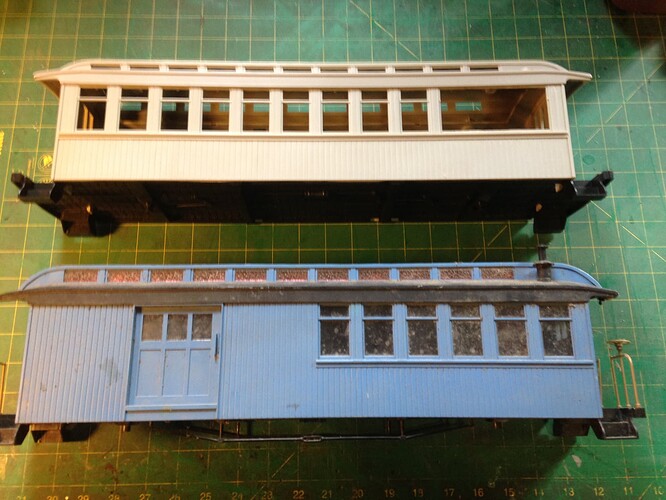 So awhile back a fellow LSC member had some bachamann cars forsale at ECLSTS in York. I don’t remember his name so I will call just call him Bob.
I told him what I wanted these cars for and he gave me a “great” deal on all of them. 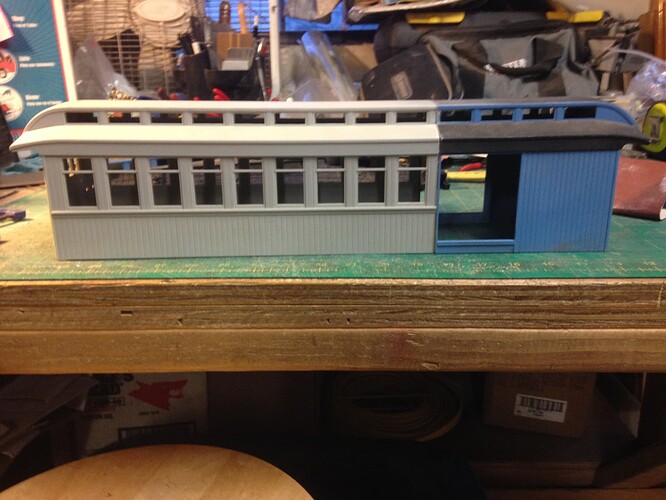 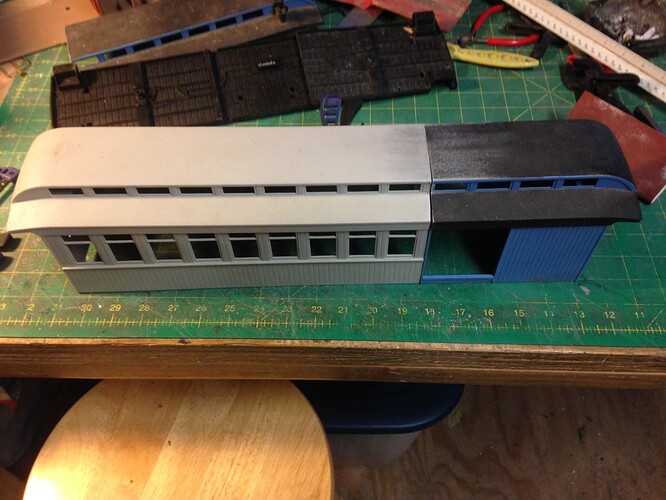 This WILL not be an EXACT model but a replica of what used to ride the rails on the CVRR Dillsburg Mechanicsburg Branch. So window and rivet counters are excluded. As like the American Indians did I use all and try to waste nothing! 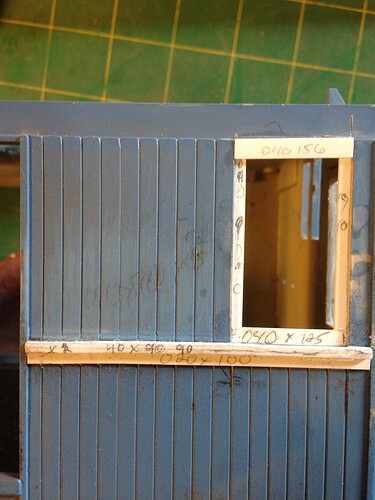 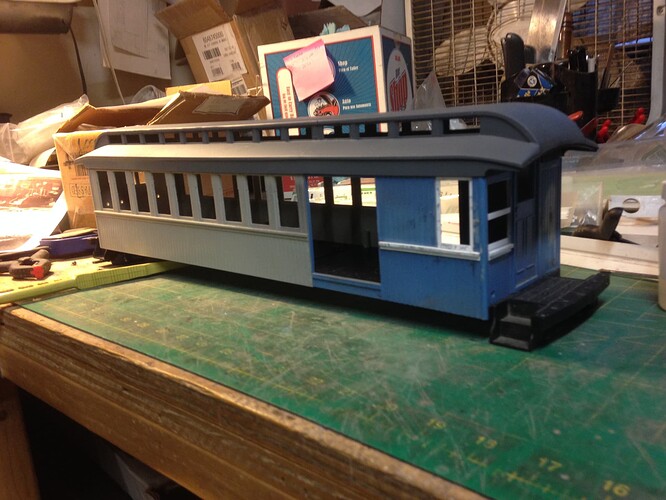 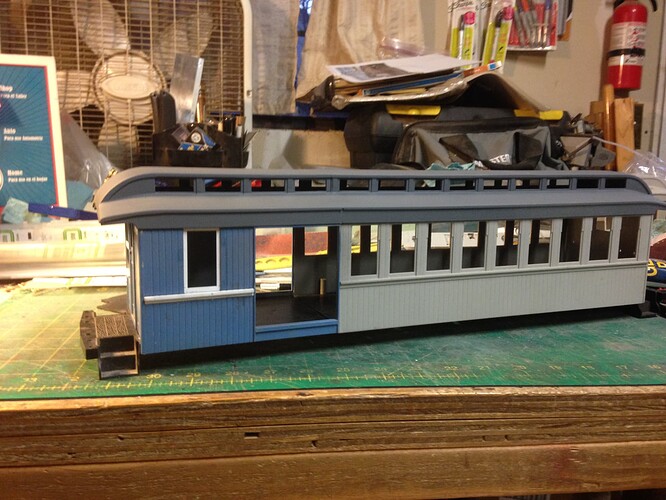 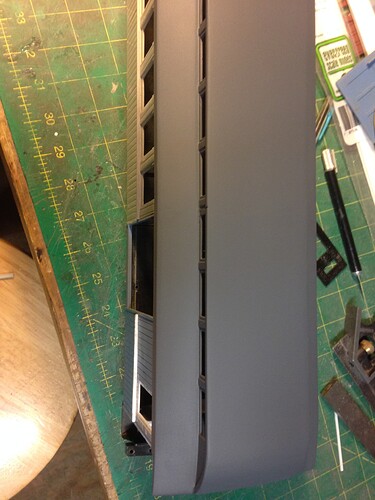 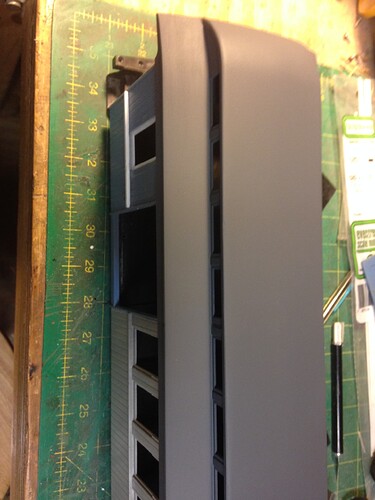 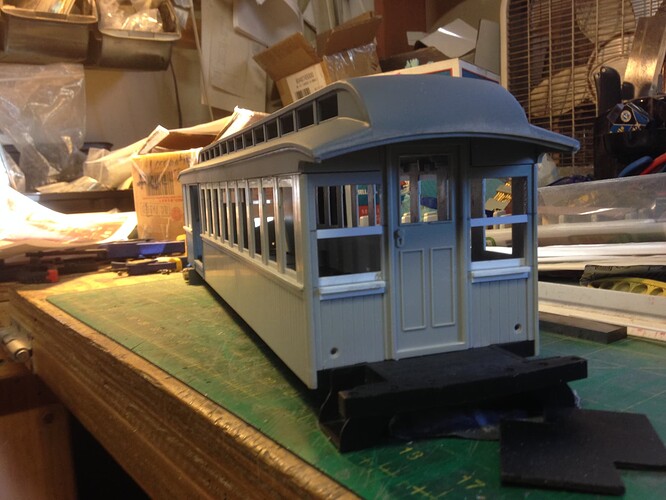 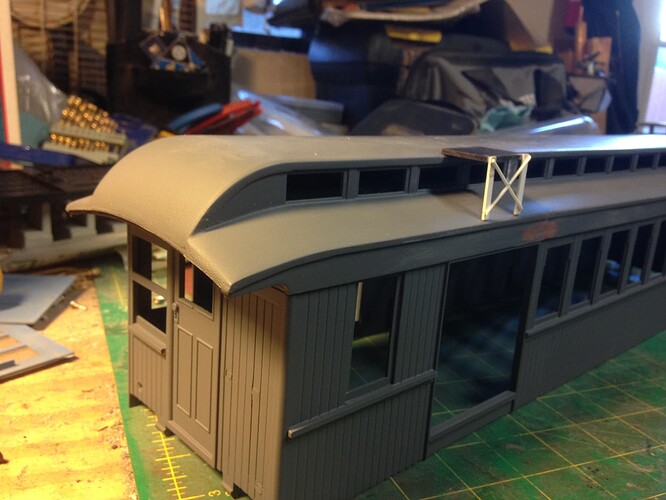 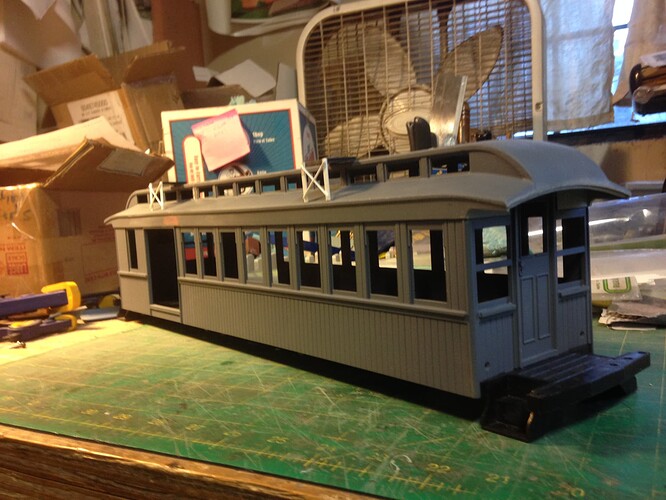 Thanks to the guy that I will call Bob (because I cannot remember his name) that sold me some of these cars a few years ago at York.

That’s all I have so far and #15 will be a static model that will not reside here so no need for a motor block.

Interesting project, Rooster. What magic did you use to make that seam disappear? If you had waited until Saturday to get started, you could have entered this build in the Challenge (https://www.largescalecentral.com/externals/tinymce/plugins/emoticons/img/smiley-sealed.gif)

Most excellent choice of subject and materials.(https://www.largescalecentral.com/externals/tinymce/plugins/emoticons/img/smiley-cool.gif)

Going to be a nice build.

Just what is a Rooster gonna do with one of those?

Just what is a Rooster gonna do with one of those?

Interesting project, Rooster. What magic did you use to make that seam disappear? If you had waited until Saturday to get started, you could have entered this build in the Challenge (https://www.largescalecentral.com/externals/tinymce/plugins/emoticons/img/smiley-sealed.gif)

Looking good. Whoever sold you those Bachmann cars gave you a great deal.

lol I noticed that. Great project, can’t wait to see the end result

OK…needing a bit of help here as I don’t want to dig too deep into this.

Never mind I came up with my own solution. 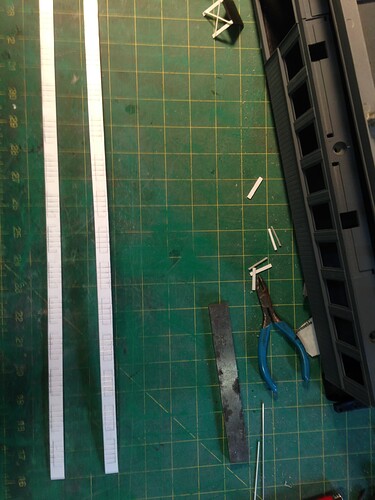 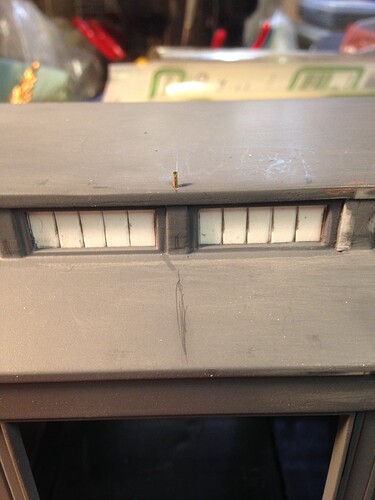 Pinned the platforms in place with 1/32 brass rod 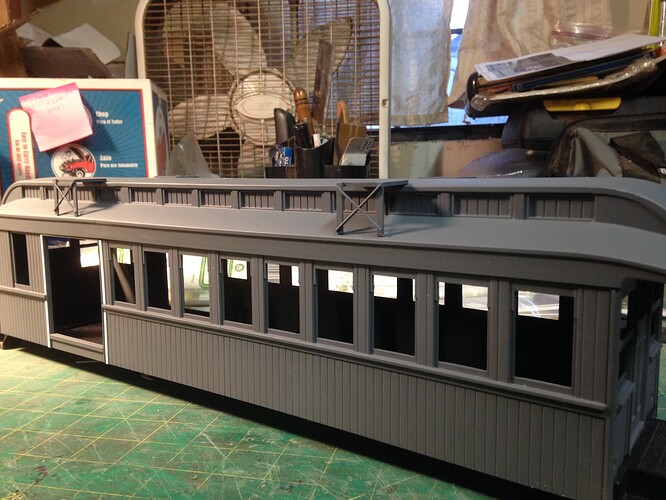 Another quick coat of sandable primer 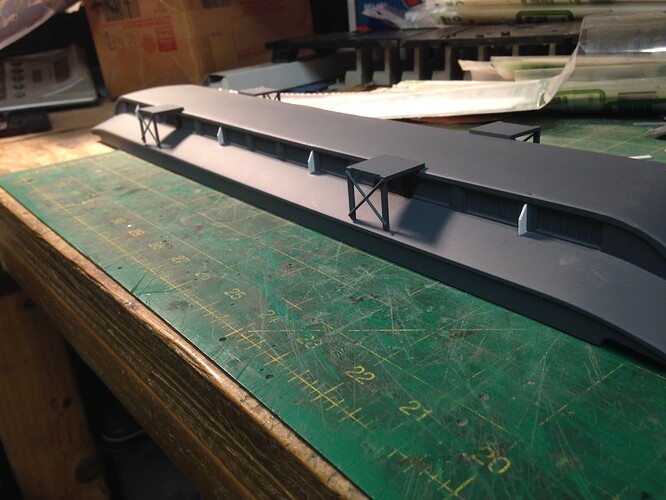 Added some gussets on the clerestory windows

This will be nice. Watching with interest (https://www.largescalecentral.com/externals/tinymce/plugins/emoticons/img/smiley-tongue-out.gif)

Well, (deep subject) the above pics^^^^ are what I got done yesterday and below is what I got done today. All I can say " It’s really nice being back in the shop and building again and thanks Bob as I told you they were all going to a good home eventually so I have more plans ". I just love modeling by eye and trying to figure out the old historical pics. Once again this is not for my RR and will reside as a static model elsewhere for educational purposes. It is not true to scale nor is it 100% correct in anyway but it sure is fun blocking out the world and playing trains.

I decided to add all 4 pantographs for the model as two of them were removed somewhere in the 1920’s (I suspect). The problem is I have NO clue other than the old pics posted at to what they looked like so I did my version. Still have not decided on how I want to do the headlights just yet as they were moved along with the brake wheels and various other things over the years. 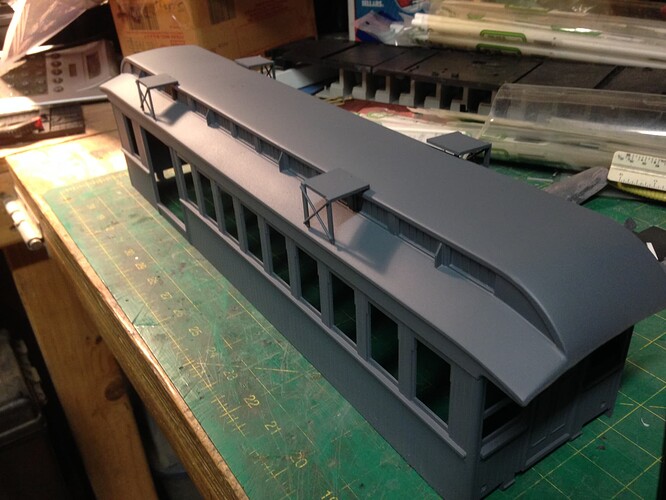 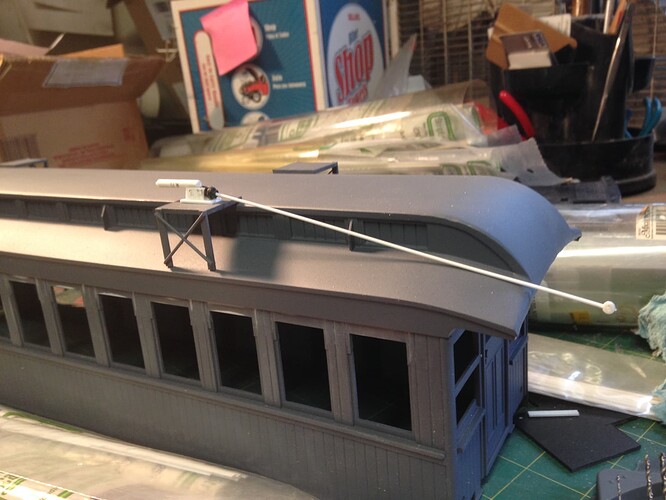 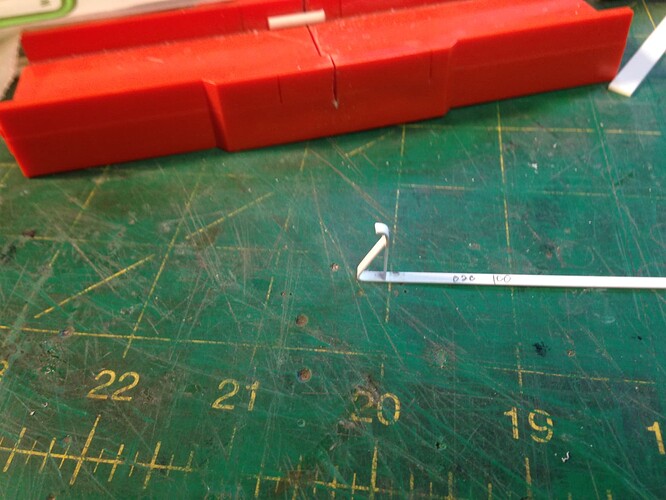 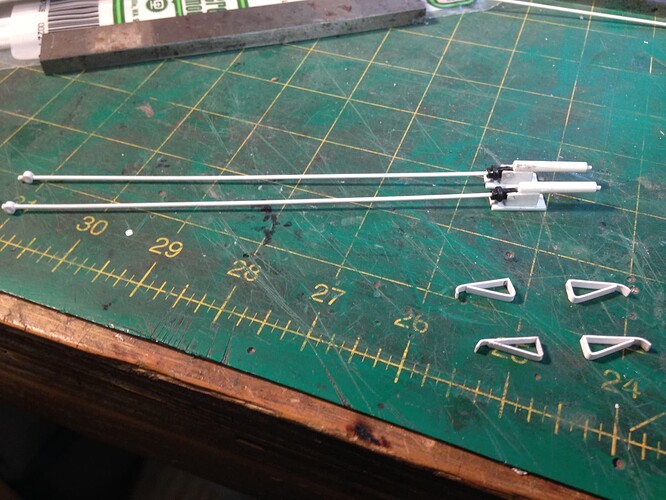 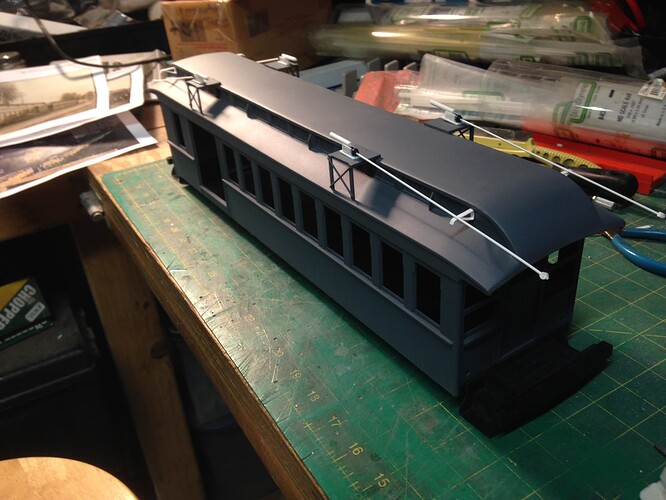 Looking good, Son… BTW, can you send me 20 bucks?? (http://www.largescalecentral.com/externals/tinymce/plugins/emoticons/img/smiley-cool.gif)

That concept has got to have caused some kind of world-record level of modeling adventures and/or misadventures.