Crane Car for the Triple O

Sure enjoying following along. 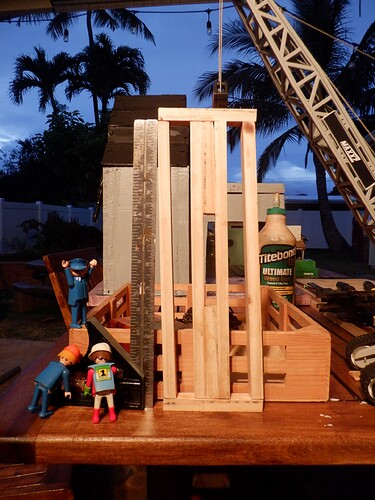 The plan for the next try involves knocking this apart, sanding things smooth, then using my right-angle clamp to get at least one square corner. I’ll do the same for the opposite corner, then slowly sand things to fit, using the same clamp to ensure 90 degree corners. Lastly, we’ll sand and fit the center beams.

No progress without practice, though I wouldn’t have minded getting this right.

Eric, don’t show the frame up against a square nor leave it parked on a straight piece of track and no one will ever know

@WaverlySouthern Dan, I am sorely tempted to do just as you recommend! I am also getting sorely tempted to mount the LGB trucks to that LIONEL flatbed to ensure I have a working base. Still, I need to isolate the issue, here, to see if there is a technique I can use to overcome my unique carpentry skills and still get a square corner.

my projects are rarely straight, square, or level. I try to blame the wood.

I blame the saw! Or the Dremel…or the drill…or the X-Acto…

to see if there is a technique I can use to overcome my unique carpentry skills and still get a square corner.

@Eric_Mueller I have a large porcelain tile on my workbench, which is pretty flat. I also have some small squares (about 3-4 inches) from Micromark, which are handy and let me support a corner while the glue dries. They include what Micromark calls a “thin beam” square:

Thanks, @PeterT . There are clearly some tools that I need to invest in to make the most of this saw. In the meantime, I broke up the frame, sanded it smooth, and started over, working one corner at a time.

any hobby store has those green (usually) hobby mats with lines and angles, or from the big box home center a couple of squares will help keep things in line.
Calibrated coconuts will not work, but maybe a calibrated pair of bricks can get you all squared up so to speak!

@Pete_Lassen yes, they do! In fact I bought one a couple years ago and never thought to use it for this project! I corrected that oversight following your prompting!

Early last week, we cut the frame apart again glued each opposite corners using a square clamp. Having only one of those, that took a couple days. When that had all dried, we got the outside squared up… 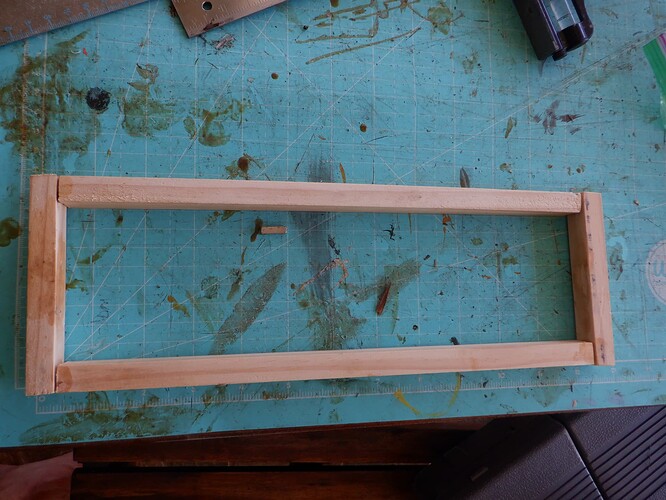 …only to find we had a little gap. 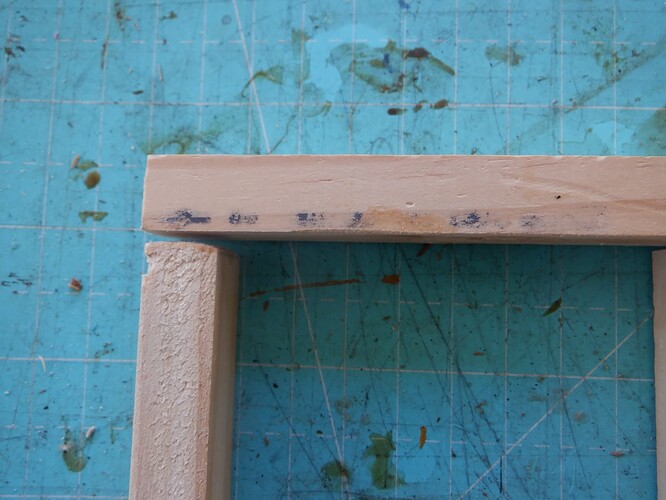 This I addressed with the sander. The car is now 1/8" closer to being a cane car… At any rate, we again clamped and glued the frame… 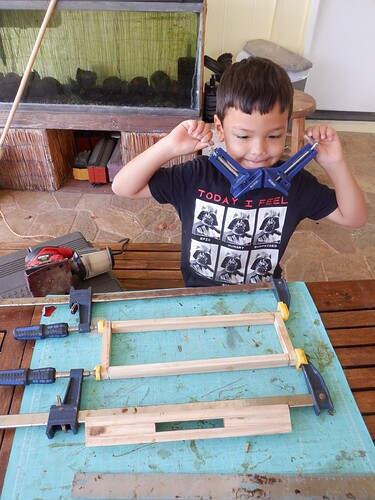 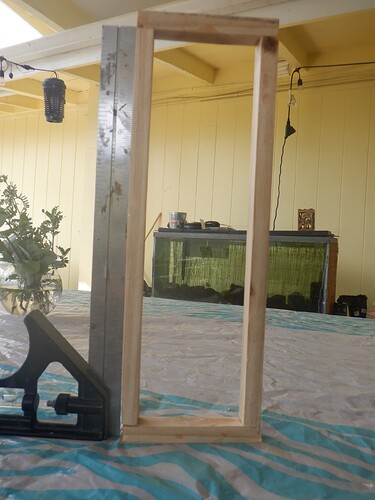 Later, I popped in the center beams. They were pretty loose, but TiteBondIII did the job. I am not very sure of my joinery, however, so this weekend I’ll tap a couple holes and hammer in some inch long brad nails to hold everything together. With that done, I think the frame will be strong enough to allow us to sand out the remaining irregularities, get some woodfiller into my less-than-square joints, sand, and prep for painting. It’s also time to start thinking about bolsters for those trucks!

Not a straight path, to be sure, but the road is getting us to Crane Car!

a new mechanical nemesis, pin nailer is needed, while it is extremely useful in showing you where to NOT put you fingers when holding a joint to be nailed. but after wound care it is so much easier to nail parts like this together without hammering which in some cases can be really destructive to the parts being nailed

Ha! I am ahead of you, @Pete_Lassen ! Pin Nailer made his debut appearance, much to the chagrin of the buffer beams. They were too short, however, to actually hold things together. Maybe if my cuts were flush, it would’ve worked out OK. There will be other projects upon which to do battle…

Meanwhile, I took at crack at this project again while Kid-zilla rigged the railroad for a co-worker’s toddler (Thank goodness for HLW Mac-s!). I had bought some longer brads to serve as a means to bind all this together, got to work with my tack hammer, promptly broke all the glue joints, and, despite, measuring, marking, and testing, got this… 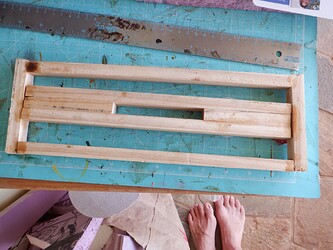 DSCF68521920×1440 235 KB
…which, like so many of my projects, is parallel only in non-Euclidean geometry. I actually took the time to throw the whole thing into the yard…I had, however, realized that there was enough slop in
this in terms of oversized beams, that I think we can still mount the trucks so that this will look properly aligned when on the rails…moving…through tall weeds…Our visitor’s enchantment with the railroad made my day, which again made proceeding worthwhile.

Sunday I took to this frame with 80 grit sandpaper, my new sander, and a vengeance. This was 20 or so minutes well spent, and the frame passed the all-important level-enough-to-let-PLAYMOBIL-dudes-stand-on-it test: 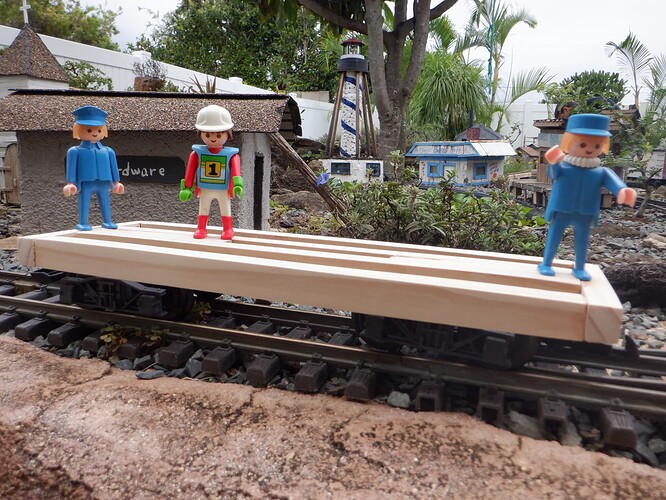 DSCF68821920×1440 361 KB
At least as importantly, there is, in fact, enough wiggle room to mount the trucks such that this thing tracks straight: 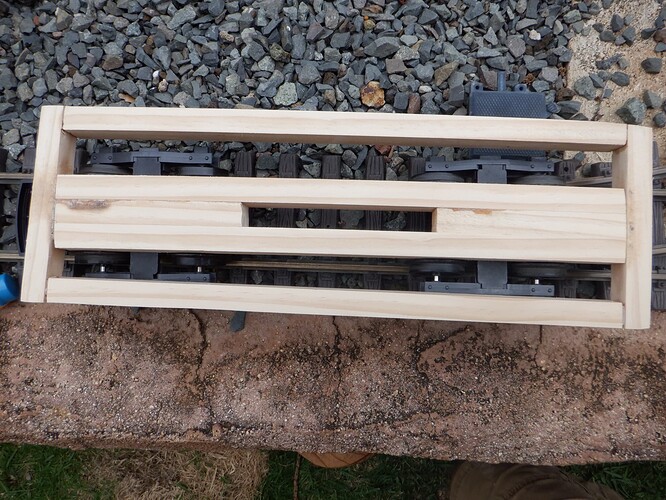 I hit this with some woodfiller, and, after sanding things smooth, have to consider painting this. The instructions mentioned “wood sealer.” Is this like the stuff for a deck? Or can I just get an appropriate - and hopefully MOW grey - primer?

While I think about that, I also have to make bolsters for the trucks (THIS should be good!) and a few transverse pieces running athwartships as well as the truss rods. I am thinking the commercial strip wood for the first two items and cotter pins and coat hangar wire for the latter, but I am open to suggestions.

Eric,
If you ever want a square wood deck, I’m sure myself or anyone else would be willing to whip one up for you. Either kit form or pre assembled. Say the size of medium flat rate box. Filling a box like that would give you quite a few car projects. But that’s not nearly the same learning process as doing it yourself.

The instructions mentioned “wood sealer.” Is this like the stuff for a deck? Or can I just get an appropriate - and hopefully MOW grey - primer?

Yes, it’s the same as the stuff you use on a deck, though deck sealer might be a bit thick for a soft wood model wagon frame. I always got by with just the primer - regular grey or brown in a spray can. Doesn’t even need a top coat.

For truss rods, you’ll probably find coat hanger wire a bit thick, but that’s a matter of taste. The copper single strands in a 120/240V cable are usually easy to work with and slimmer. And readily available at your local building site.

Sanding sealer is also a favorite for modeling. buy by the pint or quart made by Minwax and others. There are smaller jars by Testers and others but they all do the job of filling the pores for a glass smooth finish if you care to spend the time sanding multiple coats. One coat is sufficient for our needs

I’m a little late to this party as I have been on vacation for a couple weeks. But liquid nails (or some other type of construction adhesive) can be your friend. It does not replace good craftsmanship and square accurate cuts but as an adhesive it has excellent bonding and gap filling qualities

Thanks, Craig, but I try to test my limits with each of these projects, if only to find where “fun” becomes “tedium.” I am not stranger to help, nor am I too proud to ask, but as you said, it doesn’t offer the same learning.

Pete (@PeterT ), also, thanks for steering me away from another blind canyon!

It does not replace good craftsmanship and square accurate cuts

Drat! I guess I’ll have to go back to acquiring both!

Try cutting the pieces a bit longer than you need, then just run them thru the saw (clamped together if necessary) and everything will be even.

Eric,
If it makes you feel better I suck at 1 to 1 woodworking projects! Sure I can slice model down to a thousandths of an inch just fine, but ask for something with 1/16" fudge factor and I’m lost.

Also I’m pretty sure my full sized table saw fence isn’t straight either so I get some wavy cuts. One of these days, I’ll go dial it in.