So I am wondering what peoples thoughts/experience is with the smaller (1:32) Kadee couplers. I have one car I got from someone that had them on it. All my other Kadees are the larger (1:22.5) couplers. The smaller one I have seems to work just fine and with only a few exceptions mated up nicely to the larger ones.

The reason for asking is with my St Maries River Railroad project which is all going to be 1:29 (thanks to USA Trains) I am thinking of putting the smaller ones on all that modern dino burner era stuff. The others just look goofy to me, they seem way to big. I will put them at proper height (same height as the 1:22.5 size) so I can use them interchangeably. That’s the plan/idea anyway. Is there something I am missing or should know before I start buying couplers?

Also are the shanks the same, in other words are the couplers interchangeable with the boxes or on the few pieces of stock that I already have the larger couplers on, will I need to put a differnt box on them to fit the smaller coupler?

Unless your track is absolutely level OR your track has VERY gentle vertical curves, I suspect that you will find that the smaller couplers often uncouple - not because they are lousy couplers, but that’s what happens on track with vertical curves. Note: this will NOT be the coupler’s fault: but the coupler often gets blamed for track issues.

Well considering my track is not flat (there is more sloped track than flat track) and I do have 3.5-4% slope on at least half my curves and add in that my track work is far from perfect anyway and that sounds like a good reason to just stick with the big ones.

I have no experience with the smaller ones, but I think Bruce’s take is spot on.

Sometimes in order to run outdoors, we need to make some compromises on scale fidelity.

I started using the KD 1906’s and 906’s because they were a bit bigger and mated up pretty good with the larger couplers that some people with Accucraft 1:20 cars had. (AMC) And they still mated up good with the smaller couplers.

All we use here are the so called "Kadee #1 gauge " couplers, but all our track is rather stable, on wooden roadbed.
The bonus with the small couplers is the smaller gear boxes, and to my eye, the smaller sized couplers look much better.
Fred Mills

Fwiw I use all #1 Kadees, no mix/match

Little to no uncoupler problems due to normal grade changes, etc. about 3% grades on my 12 foot diameter curves…

My tracks floats on ballast so it may have small humps and dips… Use the larger G-scale couplers as folks that have run the smaller #1 scale couplers have experienced uncoupling when running their trains…
As Bruce stated, it’s not the coupler’s fault, it’s just the my railroad is…

Iv’e ran nothing but the KaDee #1’s on all my 1:20 stock for years and have experienced hardly any uncoupling problems. But I try to keep my track in good repair so that I don’t.

There is just a much smaller face to face contact area on the #1’s than on the G scale couplers so of course less margin for error.

To me the difference in the looks alone is enough to put up with an occasional problem, if the problem persists, fix your track

Your track doesn’t have to be perfect but it just needs nice grade transitions. In other words you can’t go from 0% grade to 4% grade in 1/4"… Smooth trackwork will benefit everything.

I also use the #1s on my indoor layout and have had zero accidental uncoupling or derails. I have mostly the Bachmann geared locos in a short line logging type setting. Most of my cars are Big Hauler or LGB and look, to my eye, better with the smaller couplers.

edited to add: all of the couplers are frame/body mounted.

I chose to use the larger “G” type body mounted - not truck mounted- centerset (no coupler offset) Kadee couplers even though my track work is very good. I have loops & grades to content with and like to run long, heavy trains - sometimes consisting of 40 or more freight cars. I had equipped over 350 cars and about 70 locos (all 1/29 scale) with body mounted Kadee “G” centerset couplers.

It may be helpful to take a look at following material that I had memorialize on the subject of using Kadee couplers.

…of course, truck mounting of the #1 gauge Kadees amplifies the up and down movements of the couplers, causing unwanted uncoupling.
For those with wide enough curves and switches; properly mounted body mounted couplers usually perform better.
No-mater which size of Kadee coupler you choose; the purchase of a Kadee coupler gauge, is a wise move. Or…you can make your own, but DON’T depend on just matching your height to some other car when doing a conversion…AIM for “DEAD ON” with the gauge, with both the car, and gauge on the track.

I currently only use the body mounted G scale couplers and I agree I have little to no issue with uncoupling. I use the Kadee height gauge and make them all the same height and I don’t think I have ever had them come uncoupled on my layout. I have 8’ diameter curves on 4% grades and never have an issue. I do even have 1 car with the #1 coupler body mounted to the same height and it stays coupled to the larger ones without issue. I mostly use the standard centerset body mounts with shims to get the right height. I do have a couple offset couplers and they do work fine as well. So I have played with the G scale couplers enough to know I love them and prefer them to any other coupler.

My only issue/concern with this particular project is the size. They look big to me on 1:20.3 and they look freakishly huge on my GP9 in 1:29. The one and only car I have the #1s on is a 1:29 car and it looks much better to me. And knowing that the G size and #1 size do mate up should I decide to go with the smaller ones on this project I have no concern with mixing and matching.

I should probably clarify that this will be a more or less stand alone consist. I am a steam guy and a narrow gauge steam guy at that. So 1:20.3 or something close (1:22.5 or 1:24) will be primarily what I play with. I am not a scale purist. If it looks good it runs. And as such most everything has already been converted to the G scale couplers. And I am fine with the size on this larger stuff. This train will be a very specific replication of a local shortline railroad. And as such it will pretty much be stand alone with its own modern cars and locomotives. I probably won’t be doing much interchanging between the two. With that said if I want to, I know the two sizes will play nice with each other.

With everyone’s input taken into consideration I will go with the #1 for this so that it is pleasing to my eye. And if i need to (and should anyway) will fix problematic sections of my track when i do have issues. Thats the right thing to do anyway. I really don’t have that many problems anyway. Track work is not perfect but for the most part we seem to run pretty well without issues.

ted i am wading through your link. Great write ups. And I learned something new. I had no idea that the Kadee Gauge had a car body height setting. Never even crossed my mind and honestly never looked at the gauge that close. I knew it obviously set coupler height. I also knew that it had the wheel gauge. I use both of those features on every car. But with all my scratch building of cars, I always used a guess and by golly method for car height based on what looked good to my eye and what worked best with the center set coupler. But having a set standard for car height will make that task much easier and gives me something to shoot for from the start. So thanks for the information.

On a related note, Is there any practical reason to keep the hooked section of the pin on the couplers? I do not use any uncoupling gear on my track nor does anyone who’s track I run on. Uncoupling is done with the hand of God (ie me with a screwdriver). I have taken to starting to cut mine off only leaving enough pin to make the coupler work but not having any pin hanging down.

So far I have not encountered a reason for why this is a bad idea. To me it looks better without it.

Been cutting them off for years, first in HO and ON3 scales and later in 1:20. never any issues. 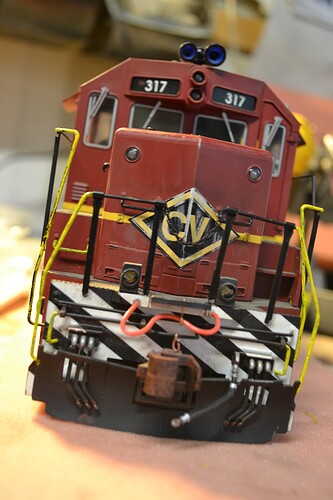 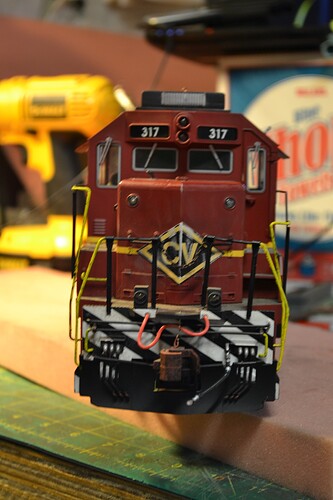 Roosters can’t read and just like pictures instead of chatter. 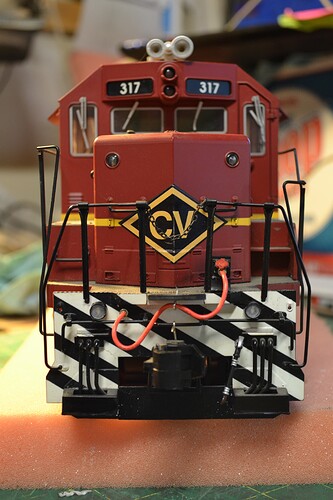 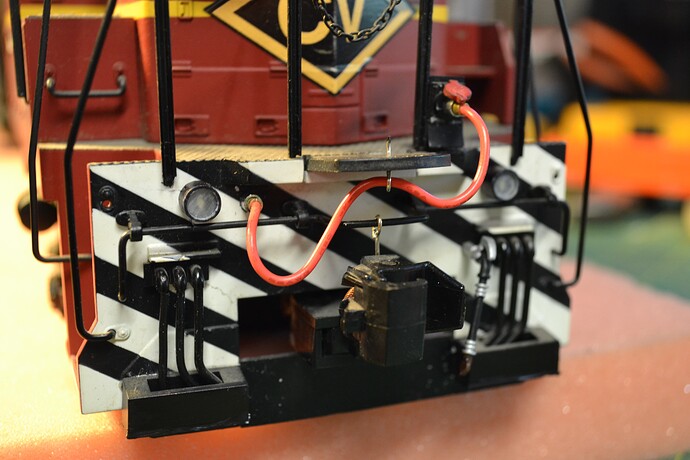 Some like my puzzles others do not but I’m just a Rooster on a “FREE” website sharing the large scale modeling RR’ing HOBBY .

Devon…WELCOME to your latest discovery…!!!
That “Thing” on the coupler gauge is a boon to anyone wanting to plan how much to shim, or cut, when body mounting Kadee couplers.
As far as those “Tails”, or pins on the couplers; they are for magnetic coupling/uncoupling/delayed action…but, as has been reported here, few use them…I know we don’t around here.
HOWEVER; from a short distance, they can represent brakeline hoses, which was Kadee’s intent.
I like to leave them, as they also can indicate that a coupler is too low, and needs attention. Often I get people dropping off cars because of low couplers, not properly mounted, with the “Tails” cut off…sure as heck, it indicate the coupler was set too low, and in desperation, the tail was cut off.
Another tip…: I put a wee drop of plastic compatible gear lube, top and bottom of that tail, to prevent rust forming in humid conditions. The rust, if allowed to form, can expand in the knuckles forcing them to crack. BTW…the # 820 couplers have metal knuckles…few if any others do, most are plastic.

Best way to remove the pin is to drive it out, then cut slightly shorter than what’s needed. When you insert again, it disappears. Vs keeping it on and having to cut as close as you can. I use a pair of lock cutters to snip mine off.