The Aristo-Craft 70 ton covered hopper car can be improved upon by lowering it to a more realistic height from the railhead whilst at the same time to accept body mount Kadee centerset type couplers.

The car can be lowered either by replacing its trucks with modified USA Trains Bettendorf “hot box” trucks or by replacing the car’s bolsters with 3-D printed lowered bolsters - available from Nico Corbo at his email address [email protected] .

The lowering bolsters are to replace the factory bolsters which are to be cut off from the chassis and include a pad for body mounting either a Kadee large foot print 906 type box or the smaller foot print CamPac box. 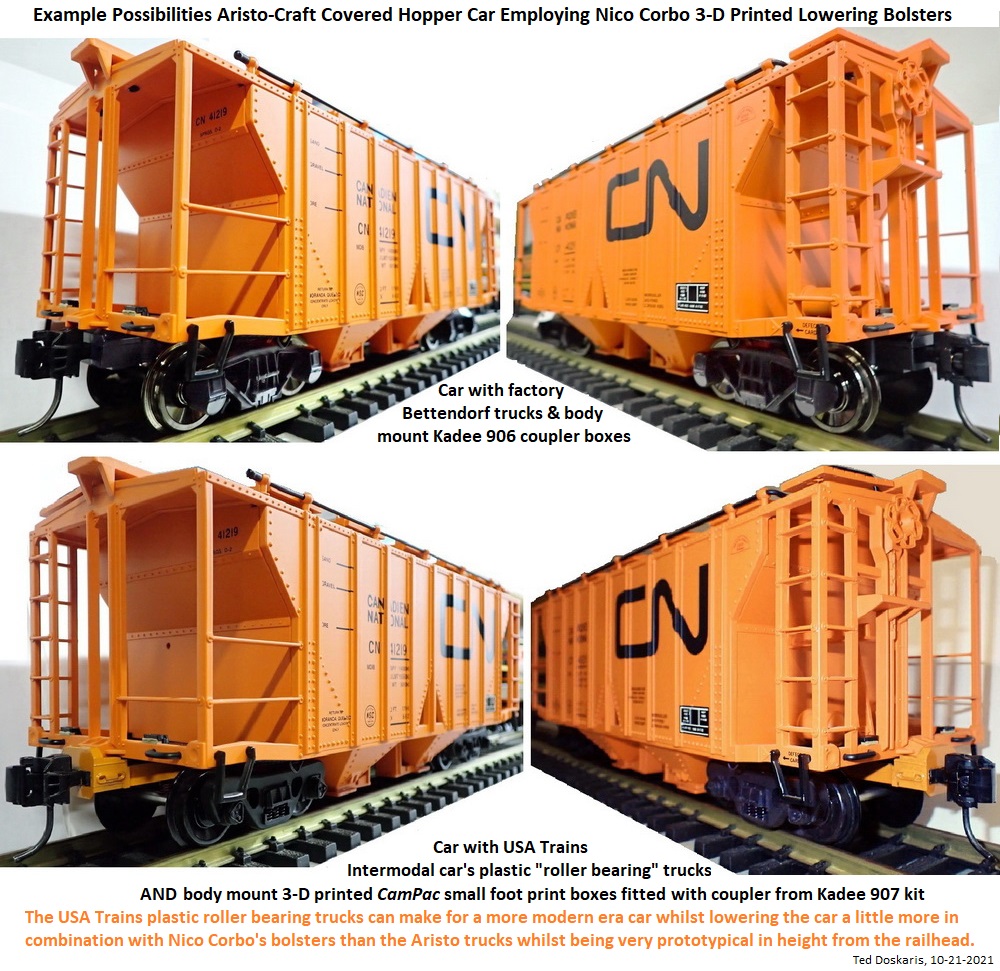 See Illustrated summary of what’s to be done

Dan;
If you look further into the rolling stock, besides the Aristocraft, original covered hopper; you will see that few of the prototypes of the models are seen in interchange service today. Take for example, the ambiguous 40 foot box car which just about every LS railroad seems to have unlimited numbers of. Then of course the freight trucks on most of those old style cars…all friction bearings, which are banned in interchange service, by all railroads.
The reason that those old style cars are so popular, is that they represent those old much shorter cars, which look so much better on the curves that most LS railroaders have to use in the limited space available at home…and the fact that they are still available on the used equipment market, at prices most of us still can afford.
The newer models, that a few manufacturers are producing, do represent the more up-to-date equipment we see on railroads today, but take for example, the USTrains automobile transporters, the intermodal cars, long tank cars, massive coal hoppers, all on roller bearing trucks. These are great models with every detail attended to; but do they even look presentable on the average LS railroad with 10 diameter curves in a 20’ x 10’ back yard, pulled by a giant Dash 9…or two…!!..?
Yes the old Aristo covered hopper car shows its age, but it is one of the many cars that still look reasonable on an average LS railroad today. We have many of them on the IPP&W RR…all with body mounted Kadee couplers.
There are also rules that all North American railroads must abide by, concerning equipment allowed in interchange service. One rule governs the age and condition of the cars. For example: Archbar trucks are banned in interchange service.
The study of railroads and their rules of operation can be interesting…!!
Fred Mills

My contribution above, is NOT meant in any way to be critical of what YOU the owner, or member of a club enjoys running on YOUR or your club’s railroad…
EVERYONE is free to enjoy whatever equipment they choose. There are no rules preventing you, or anyone else, from running/modelling whatever equipment you choose.
Keep the fun in Model Railroading…Model Railroading can be fun.
Fred Mills

As to the Aristo covered hopper car decorated in Canadian National livery, it may very well have been not too prototypical for a car with up swept end frames not very common. I suspect, too, that the CN car in this orange livery is more of maintenance of way car. The scripting on the CN car identifies it being built by Canada’s National Steel Car Company (NSC), presumably with agreement of US companies ACF or Pullman Standard, etc.

Jersey Central and L&NE, among some other railroads, had the ACF cars like the Aristo car represents, but the more common, short cars, akin to these had the boxed end frames and were rather timeless in design transcending into mixed service having roller bearing trucks with the modern much longer covered hopper cars.

I think a skilled modeler can add material to the up swept end frames to make the Aristo car more universal, and I know from watching one of Large Scale Consolidated streaming videos, Nico Corbo’s son, Vincent, had used Dan Gilchrist’s designed 3-D printed see thru roof walks and round hatch covered roof to further modernize this car.

Thanks to Dan Gilchrist for your excellent contributions to the “G” scale community.

I have a video of a train pulling 25 Aristo covered hopper cars before Nico Corbo’s 3-D printed lowering bolster were available, so the CN car is not in this video.
The cars in the video were lowered by using USA Trains Bettendorf modified trucks. All hopper cars have body mounted Kadee 906 boxes with centerset (no offset) couplers.

I think it best to see the video on YouTube so the commentary with “show more” can be seen.
Video: “Aristo RS3 refitted with BB motorblocks” - pulling 25 Aristo Covered Hopper Cars.