i am trying to make a wiring-plan for something that is new to me. so far i did not come up with a solution, that seems to function. anybody wants to torture his brain a bit? what i did before, is run trains in circles, like in the first pic. one half of the trains is wired in reverse. the wiring was more or less like this: (there were variations, but i don’t want to sidetrack) 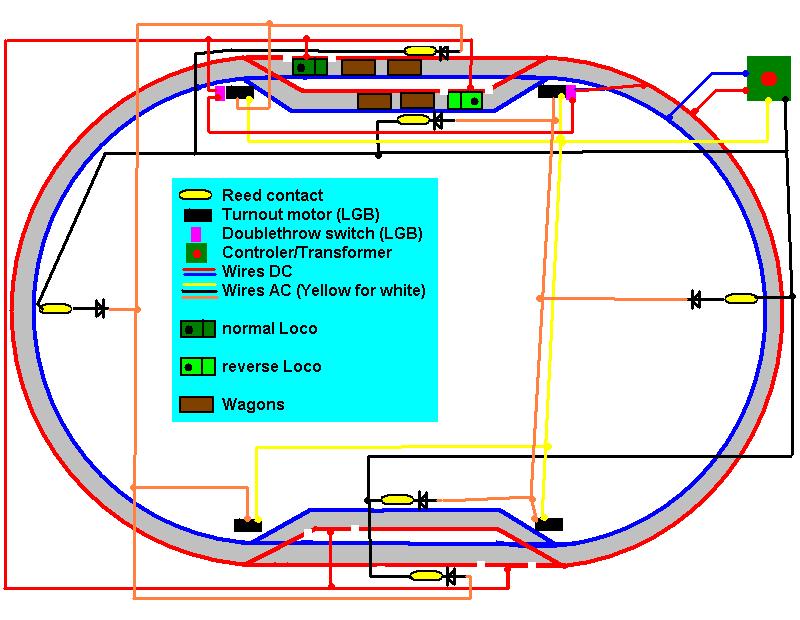 so far - no problem. but as a former sailor, living in a half-desert, i simply HAVE TO include a harbour into my layout. this harbour, as i vision it has two piers with two tracks each. the trains drive on one of the piers, then back up on to the other, before they resume their journey around the circle. so that the whole thing would be like this:

how to wire this “double wye” with sidings is what i am braining about. but it seems to be a real brainbuster. the system is simple analogue DC. i got more than enough turnout-motors and additional switches (double throw) and reed contacts avayable. (LGB and home-made clones) this is, what has to happen: let us pretend, that two trains (one normal, one reversed) are in the northern station. i already coloured the rails after the polarity needed. 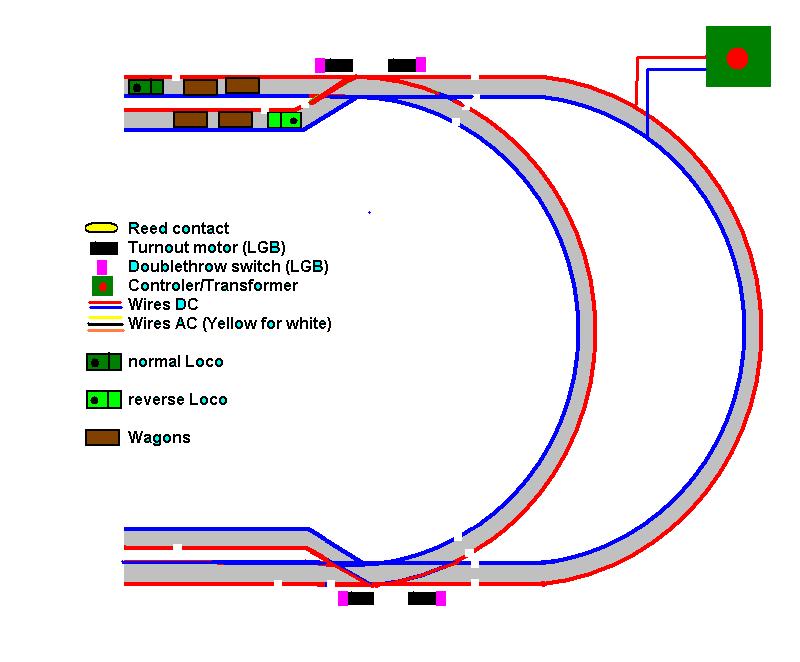 the right, outer loop represents the connection with the rest of the layout. for better understanding i leave that out for the moment. one train leaves north-station, going into the main loop: 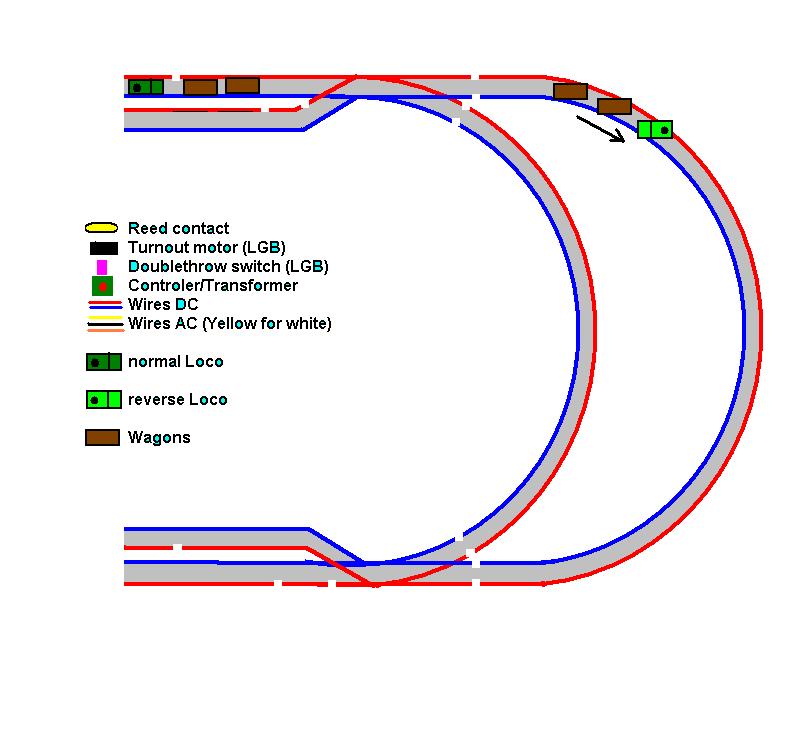 the other train reverses to south-station: 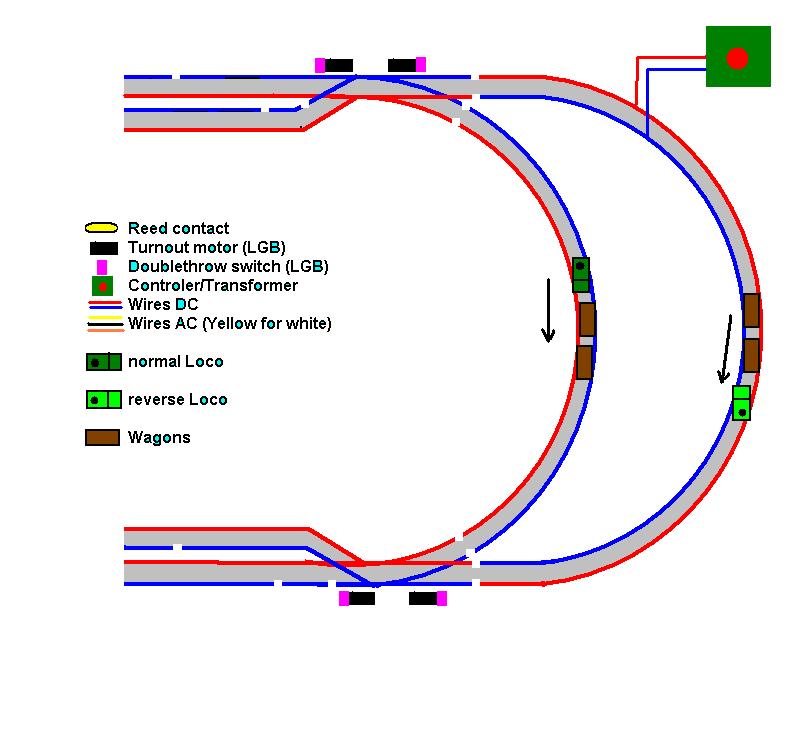 a train comes from the main loop into south-station: 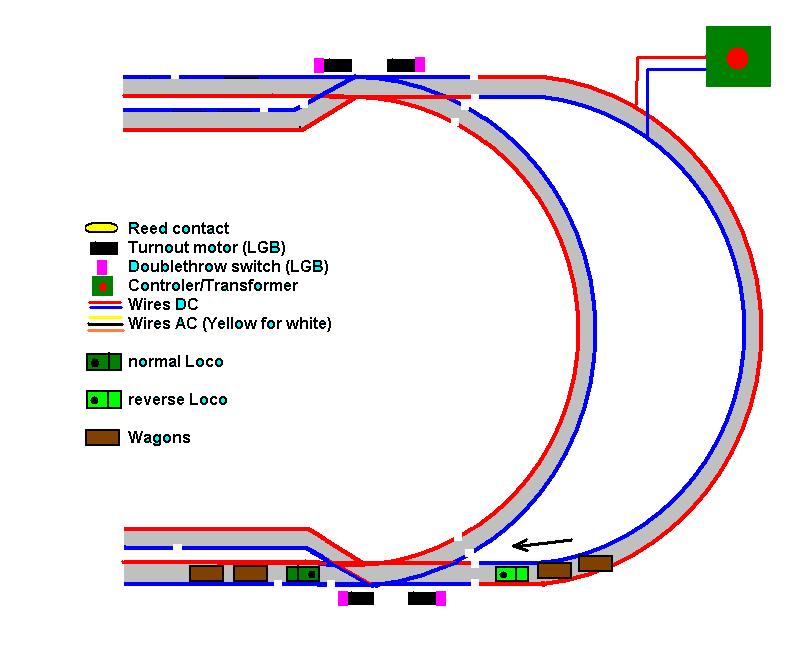 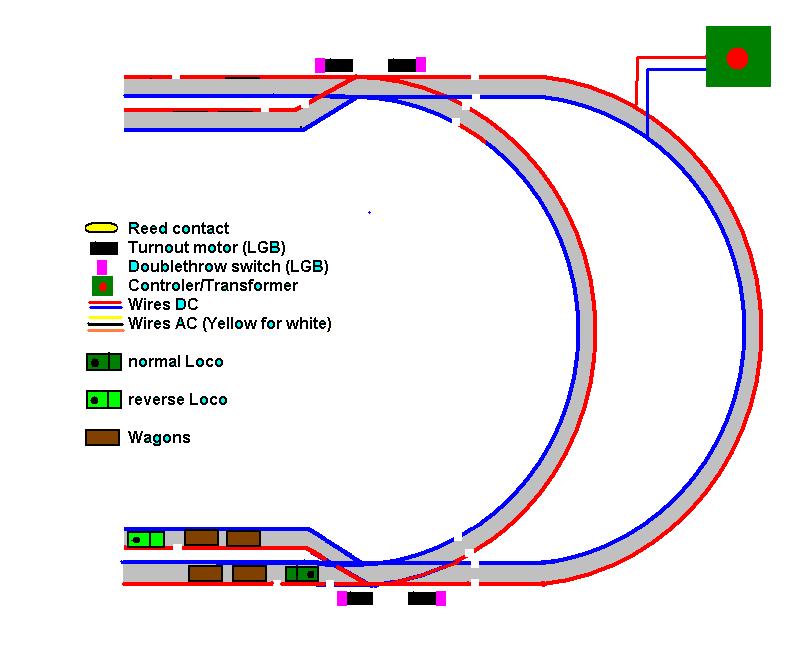 the train, that had backed up into south-station leaves for the main loop: 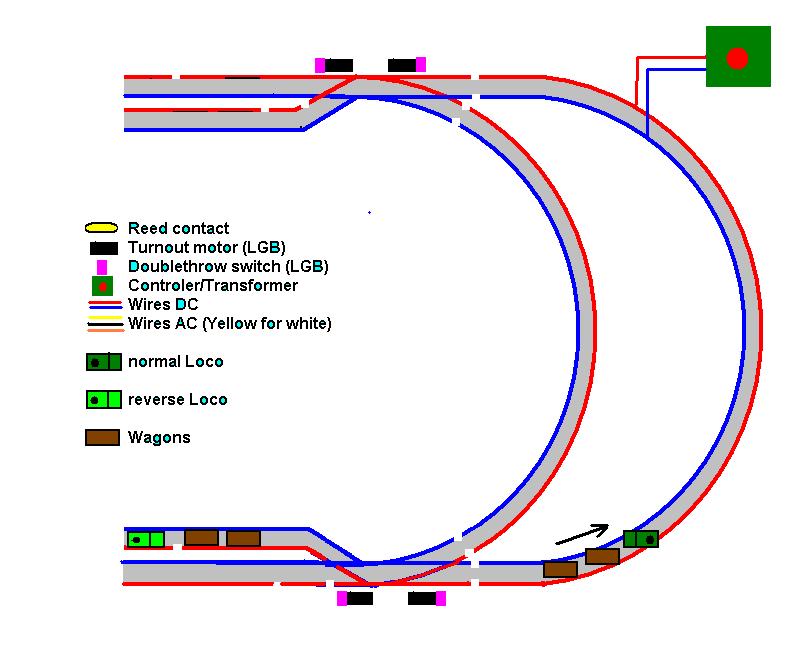 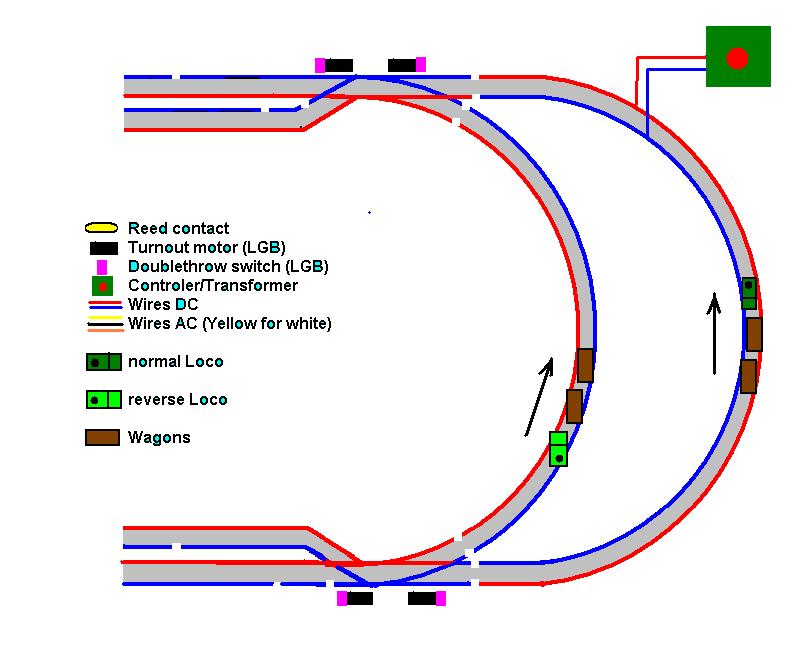 a train from the main loop heads for north-station: (note - the polarity as shown in the pic has to be changed, before the train enters the station) 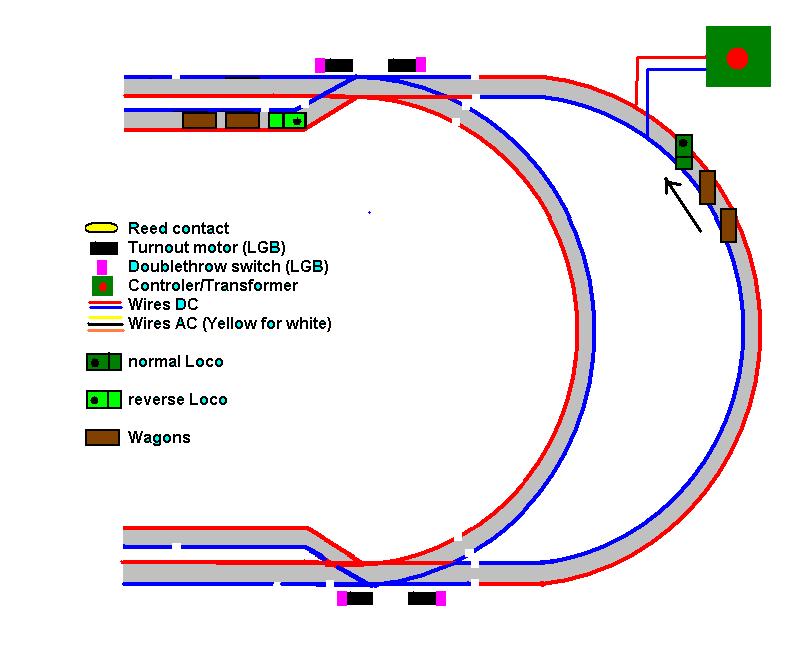 with that, the sequence begins to repeat itself:

the goal would be to wire this with less than a hundred wires. (on the other hand i would not like to let any reed activate more than two motors…) anybody willing to help my overloaded brain back on track?

Korm,
Didn’t know you had posted this here. Did the wiring guru at MLS fix you up?
Ralph

yes, Toddalin found something, that looks simple and seems to be up to the job.
i will try it out, to see how it works.

i did post that on one german, one british and two northamerican forums. there was exactly one person, who gave it a try…
seems, that there are not many largescalers into automated ops.

Korm,
You’re right about not many Large Scalers running automated.
You might have had better results on an HO forum.
Ralph

on an H0 forum??
i don’t have any H0 left, since, about 46 years ago, i had the brilliant idea to combine my H0 layout with some new year’s fireworks…

Tray Dalle electrionics they will have what you want

Wouldn’t it be simpler just to use spring loaded turnout points?

Wouldn’t it be simpler to just turn the uncontrolled “early cutoff” configuration (two paths on right end of oval) into just another controlled siding?

Daniel, thanks, but i’m cheap. so i try to do it with locally avayable things. Joe, for simplicities sake i drew just two curves on the above pics, the outer curve representing the rest of the layout. look at the two pics below. the first one shows, how i started to build the layout. six stations with passing sidings, six trains (three in each direction) they all move at once, and meet with another train in the next station. the second pic shows my new idea. stations 3 and 4 replaced by two headstations. the reason is, that i will model a harbor, and the harbor will have two ten foot piers, with two tracks upon each. the question is, how to plan trainmovement (backing up) and train sequence, to fall in with the movements on the rest of the layout. at the other four stations i use spring loaded turnouts, but these four at the harbor all have to admit trains in both directions to different track.

now you know why maney of us are into batteries and R/C!

E. Paul Austin said:
now you know why maney of us are into batteries and R/C!

Simplify life, get rid of that direct connection between Station 3 and 4. The rest will fall into place with the addition of a trolley module for Stations 3 and 4. Of course it depends how many units you’ll “need” to run at the same time.

Just to rub it in a bit more, any half-way capable DCC system will handle this “problem” no sweat at all (without computer assistance!).

Which is a few components less than the battery crowd will need!

i thought about a lot of possibilities. but the nature of the layout (46’ by 16’) on two levels - being planned as a number of diaramas, that are interconnected as a single loop with traffic in both directions will give me the best diversity possible.
on the other hand - the harbor is a must!
with the avayable space the harbor either gets not enough “water”, or it has to be more or less like i am planning.

you can rub as long, as you want, it pearls off my skin…
i am simply one of those rare beasts, who do not have fun by steering their trains manually. and as far as i understoiod DCC, it does not work as an automatic block system.
so a fistfull of reeds with enough turnout motors are, what i need.

The system I use from N through IIm is called ZIMO. This puppy is smart enough to learn tricks and then remember them i.e. you teach it what the sequences of a number of operations are and then it will repeat those. Since you are working inside - none of the drawbacks of the garden - you should/could be smiling and you learn something new in the process!

i have a monthly net income of about 1.400$ (that more than thrice the national average)
the last three locos i bought, were used Stainzes to about 70 $ each (plus about 30 for postage)
knowing that, would you really expect me to buy some fancy remote control, that has more buttons, than i got braincells? for the price of four locos?
i was an outdoors man during most of my life. i know, how to make a rawhide lasso, or how to castrate a bull, but i ignore most functions of our cellphone.
reeds and switches with cables between them, that i can understand. but advanced electronics…

i do buy everything, that i want - but i take care, WHAT i want.

That’s the problem at our age, where do we apply the money in the most effective way.

Since you have all the other gizmos , it’s a matter of making them work. I’ll see what I can come up with, haven’t done much of the old “run some more wire” stuff in 15 years, but the gray matter’s still there.

i would be very gratefull.

in theory there will be two trains at the upper pier(the upper two sidings) or two at the two lower sidings. - every second of the six stations is occupied by two trains. then all trains run together (in theory) and then the other three stations have two trains each.

in reality, at the harbor i have to stagger the trains because of the turnout-bottleneck.
the distances from the harbor to the two next stations in the circle are 15’ to one side and 50’ to the other, while the small curve between the two parts of the harbor is only six foot long.
so i think, best would be to let the outgoing train pass first over the turnouts, then let back up the other one to the other part of the harbor.

the trains in the harbor do not need to trigger each other, if that would be a problem. i have one tracksection between stations, that will be more than 90’ in length. the train on that section will trigger all the other stations. so it might trigger the traffic in the harbor too.

done - as far as possible

thanks to Todd’s council not only the thread, but the layout as well.