I’ve been through 3 or 4 plans and so far nothing I really like. I’m not looking for a complicated puzzle, but something a little more complex than a stub end yard. I need to work with what I have in-stock for switches as shown in the INVENTORY box. That means there will be an R1 district that must be worked with my Porter and will support short cars only, of which I have 6 on-line now and can add 4 more by mounting couplers.

Here is my “blank slate”. Darker bences and shown track is existing. The lighter benches are new. Dark area at top right has clearance issues from existing water pipes. At lower right, along the left edge of the bench there is about 4 feet below the shown bench that could be used as a tail.

The above image in 1024 pixels wide. Use View Image in your browser to see full size.

All ideas will be considered. Thanks!

I was getting bogged down using the larger (horizontal) space as my R1 district. Changed it around and came up with this. Track closest to the edge is the main, a re-designed Willow Hill at top and the R1 district at lower right. My Porter will live at the first track in from the main at the bottom…

[Image is 2048 Pixel wide - Use View Image function to enlarge]

Since track plans, and what people like, tends to be a personal thing, go with what appeals to you.

Slide that #6 to the right and use it as a lead into the curve and run another spur up along the edge of the short module R1 District.

Well, I think if I use all my track; it’s best (http://www.largescalecentral.com/externals/tinymce/plugins/emoticons/img/smiley-laughing.gif).

Slide that #6 to the right and use it as a lead into the curve and run another spur up along the edge of the short module R1 District.

Well, I think if I use all my track; it’s best (http://www.largescalecentral.com/externals/tinymce/plugins/emoticons/img/smiley-laughing.gif).

Thanks John - I try to reserve #6’s for mainline use. Yes, I consider that outside track the “main” to the new town, it dead ends so no high-speed running. I do have a spot for it outdoors.

I am questioning the value of the run-around. I slid the first switch left two feet connecting directly to the entry switch to give room to leave a car there and get around it. Maybe I need to plan the industries first, then decide how to serve them, rather than just trying to use all my track!

I just moved into a new home with an unfinished basement. I am thinking of putting in and overhead layout in G scale. I have 10’ high ceilings. I am looking for photos of other indoor layouts. I have built other indoor layouts with single or double oval layouts, but no switching. This is a photo of what I call my current layout and my old layout. Trying to figure out how to insert photos. (http://www.largescalecentral.com/externals/tinymce/plugins/emoticons/img/smiley-cry.gif)

I don’t have a lot. My indoor track has no scenery and very few buildings, so most of my pictures are taken outside, but here are a few I dug up. Construction of Phase II… 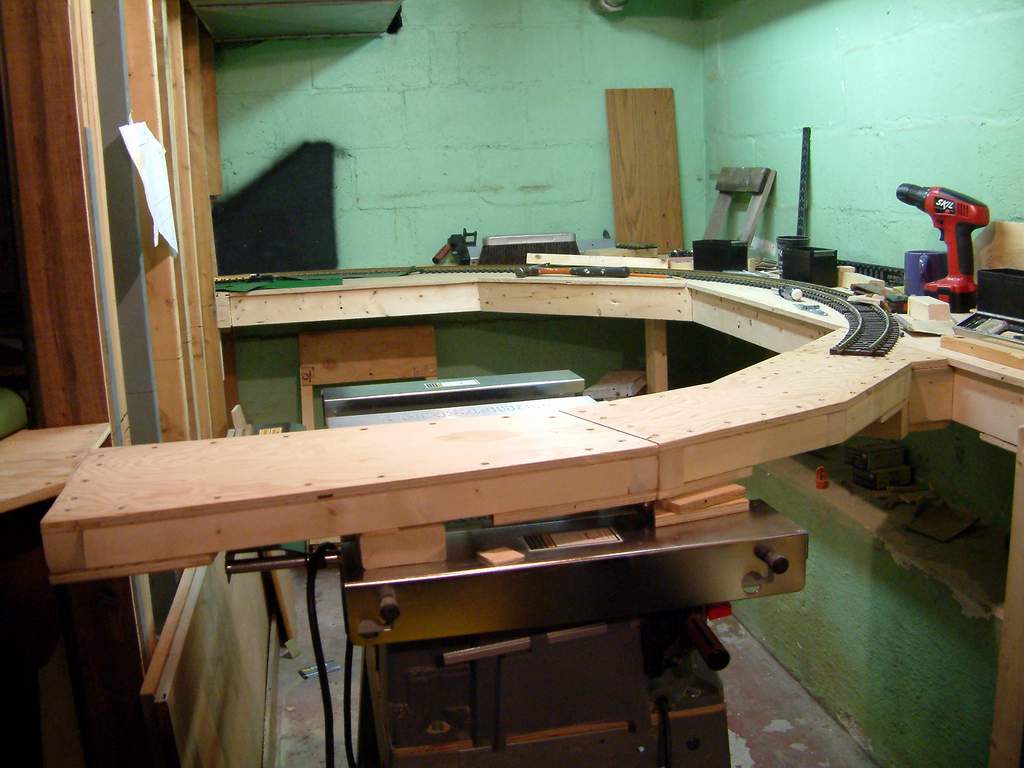 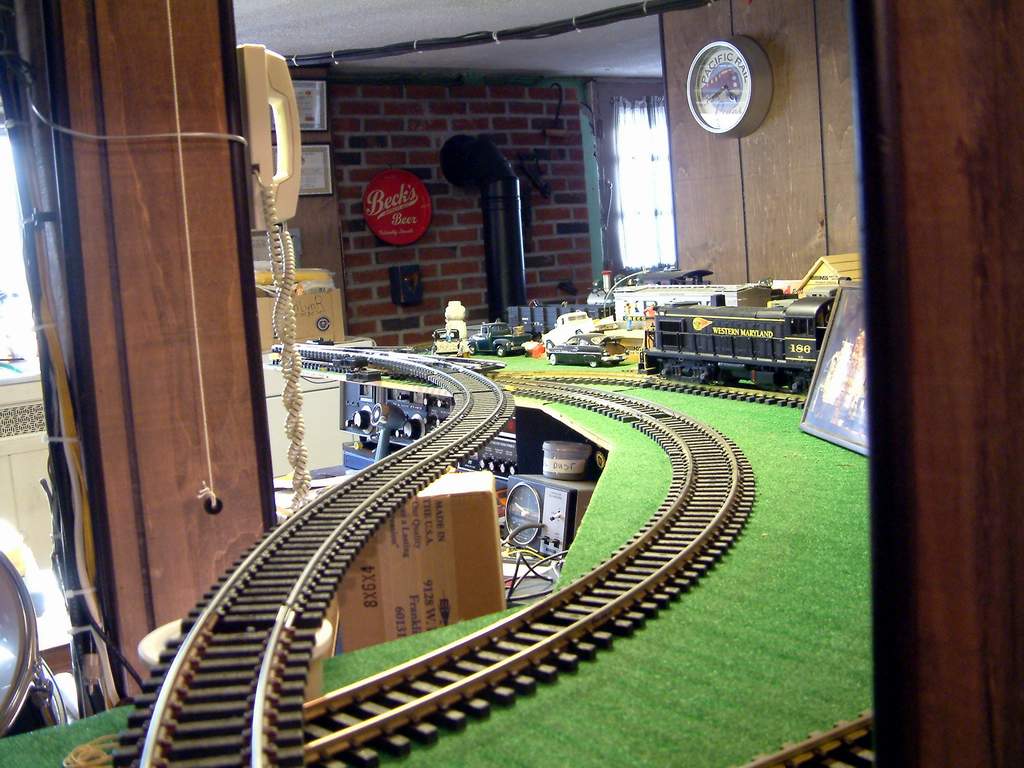 Pahse II construction complete, some buildings and accessories and trains in place… 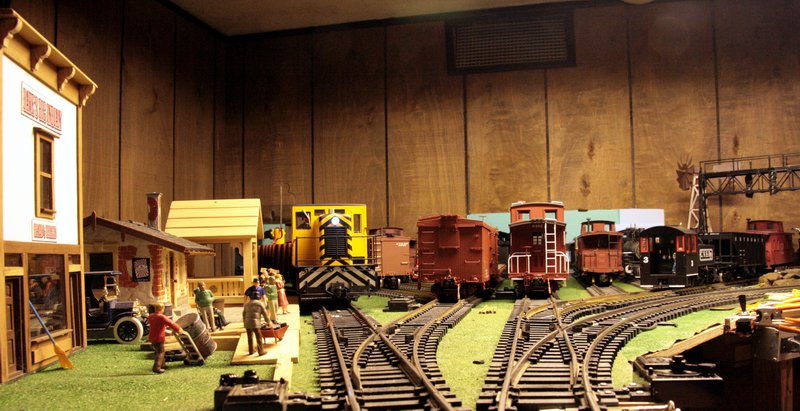 Prior to my last few expansions, my indoor was simply a storage / yard serving the outdoor division with no continuous run. I am moving toward having self-contained point-to-point railway indoors, but still no continuous run. This was Phase III, a temporary addition to add some indoor operations… 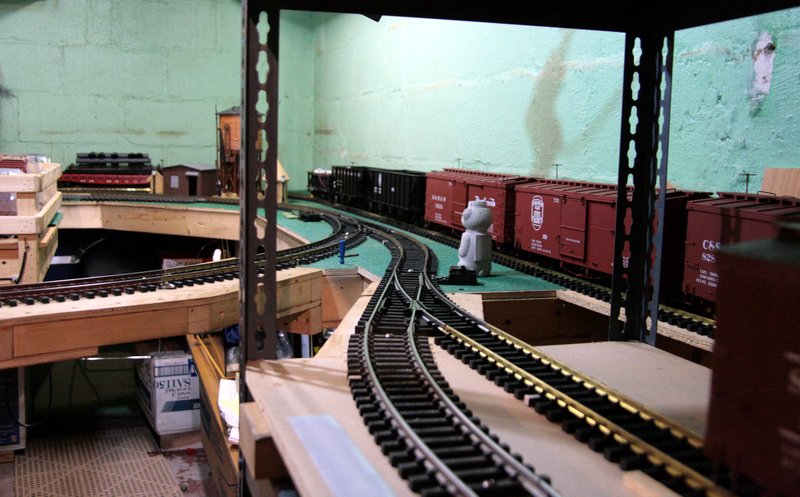 If you are looking for inspiration on a fully sceniced indoor railway, there are a few threads on here that feature some awesome work. Check out Landrel Brown’s awesome work in this thread: http://www.largescalecentral.com/forums/topic/24089/my-indoor-layout?page=1

Thanks for the link and the photos. That is a whole lot more than I plan on. Could you step me thru the process to insert a photo? I am looking at using two of the rooms in the basement for a train layout. In these rooms I could do a 36" high layout.

Jay - Look at this thread for picture posting help http://www.largescalecentral.com/forums/topic/20241/picture-posting-help-for-rick-marty

I think it still works with teh new freight sheds. If you have questions, ask them in the picture thread where the answers can help others.

So, anyone have any comments or suggestions on this plan? The bench frame is done, time to start putting down plywood.

I was getting bogged down using the larger (horizontal) space as my R1 district. Changed it around and came up with this. Track closest to the edge is the main, a re-designed Willow Hill at top and the R1 district at lower right. My Porter will live at the first track in from the main at the bottom…

[Image is 2048 Pixel wide - Use View Image function to enlarge]

I had about 100 feet of tables set up in my former home when I first entered the hobby. They were built of 1/2" plywood and 1 x 4 pine lumber. In the square corners I added 45 degree triangles. They were easy to build and add to hold the 90 degree turns of curved of track.

As the back of each table was screwed to the wall studs, I was able to use 2 inch, black ABS plastic pipes for the front legs. The pipes were easy to cut with a chop saw. Small squares of lumber drilled out with a 2" hole saw were fastened under the tables where they joined to hold the top of the pipes. Any shimming could be done by adding 2" washers above the pipes. I could remove the pipes one at a time when I wanted to paint the basement floor.

My worse mistake was adding ballast with diluted white glue. Later I removed a 12 x 15 foot oval of double tracks to make room for a small train work shop. I had buy a wide heavy duty scraper to break the tracks free. The track and switches were almost impossible to clean. But worse was sanding of the remaining small stones from the table tops so they could be used for work and tool benches. I bought a belt sander, a lot of 40 grit sand paper belts, hearing protection ear muffs, and an industrial filtered mask. I had to wait for the boss to leave because of the noise and dust. It would take about 20 minutes to sand down each 2 x 8 foot table top, and the entire basement would fill with a cloud of fine stone dust.

Over the years the railway shrank as the space was needed for other things. Eventually all that was left was a 2 x 30 foot length of tables. As I found it was noisy running trains, I carpeted the top with black and gray carpet. I did not need ballast as the carpet held the track from moving and added a stone and cinder look to the yard. When I got bored I could change the track plan. They were all used like time saver layouts during the winter months to pass the time or test the latest locomotive project. Eventually all the large scale cars remained at Fred’s to be used for our Saturday morning operations. However the shelf was later used to build an ON30 layout. It was disassembled when we moved four years later.

One of the reasons I stay with just the green grass mat. Looks a little hokey, but changes are easy and all I need to do to convert all this heavy duty bench to a workshop is remove the track and grass mat.

What is that odd looking white thing with the tail on the wall??

Its a land line tele-fone. I cant see if its rotary dial or touch tone. I have a black one in my kitchen.

Ha Ha - Yes. Touch tone with memory dial. High Tech in the 90’s when it was installed!

An analog wasteland, why there is a clock with hands!

Capt’n Luddite is that you?

But clocks are supposed to have hands.

And speaking of grass mat (I was anyway); HOLY CRAP has it gone up in price!!! I used to get enough of the LifeLike for a 4x8 for under $20. The new fangled stuff if almost $40!!! Me thinks this entire table top will not be all grass.

An analog wasteland, why there is a clock with hands!

Capt’n Luddite is that you?

If a clock has hands, or even if a sailor rings a series of bells every half hour, I know what time it is. If I’m looking at a series of numbers, I have no clue, so call me a Luddite if you will, I wear the title proudly.