The Path to the Mik Leads Through Water

We are still bickering about the Mik. We did, however, spend the last three days in the garden replacing a pond that had proved too shallow for the fish we wish to keep, taking the opportunity along the way to correct about 4" of settling and even adding our version of our sub-roadbed! Oldest Daughter has taken to aquarium keeping, and I had promised we would get this done after Christmas and in time for spring “tub pond” stocking. Promises must be kept. It worked, but we never found a way to cover the rubber lip of the vinyl liner, the pond foam being the best we could do. Plants that dared creep onto that vinyl sizzled, so we did what we could. When a friend gave me a pre-formed pond with a narrow lip, twice the depth, and equal or more volume, I had all I needed to proceed.

Between Thursday and Friday evening, the crew set up temporary homes for and removed the guppies, water hyacinth, dwarf lily, and a sorry Cryptocryne sp. Friday, we removed the liner, placed, and leveled the new pond: 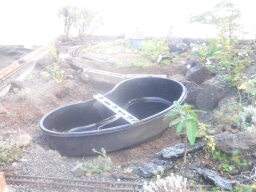 Oldest Daughter noted the pond is a bit warped towards the shallow side, so we did our best. It was free!

Today, amidst occasional downpours, Oldest Son and I started shoveling buckets of stuff left over from previous projects to fill in around the pond. As we had decided to use this as an opportunity to correct the settling, we had to come up with more concrete bits, dirt, and rocks, than we had on hand. He hit upon using some half hollow-tile that used to hold the old liner in place as fill, and we decided it would be better employed as a sub-roadbed of sorts. He grabbed a small level and went to work as Oldest Daughter integrated in new rockwork to tie our landscape together: Youngest Daughter took the Kid-zilla watch, which freed me up to do the heavy lifting and crew assignment deconfliction. They did join us for a run to the nursery for dirt, cinders, and some plants (to include sedum for the new rockwork, false heather to be “trees,” and marigolds to…well, they look nice!). Kid-zilla took a nap, and his siblings set-to: After that, we replaced the rest of our gravel to serve as weed barriers and to fill a couple holes, cleaned our tools, and reconnected the track. The end result is below: I had told everyone the guppies could not go home until everything else was done, which was a pretty evil “Dad trick,” but all hands held to their respective roles, and they all got to be part of the big guppy release! I should mention we did fill the tub prior to the climactic event.

I know we will now spend 6 weeks cleaning rail joints, but I think the visual impact of the change, the better supported track, and the new fishkeeping options will make it worthwhile. On to the Mik!

I finished the edge of my pond with flat stones.

Looks good. The fish should be happier.

Teaching valuable team building skills and having fun doing it, now that’s what dads do best. The pond looks great and I’m sure the guppies appreciated their new home.

Thanks gents. Hard, but satisfying, work. As for flat stones that could hide the edge and survive the foot traffic, we never sourced any locally that were affordable relative to other household and railroad priorities. We are hoping that we the relatively narrow lip of the new pond will not be the solar collector of its predecessor and that plants will eventually hid or creep over it. If nothing else, if it settles like the last one, maybe at that time paving stones will make the purchase cut!

Eric, check this stuff out really hides the edge well can even go in the water (https://www.rock-on-a-roll.com/photos.shtml)

I have some green chicken wire buried and cascading over in some spots . 1st it gives the critters an escape … I just haven’t spent enough time to find the right plant to work in the micro climate were the water feature is…