Hi all, Last Summer at the GRR Convention in Tacoma I picked up a SpecCast 1:16 scale Monarch model 35 crawler in diecast metal. The Monarch Tractor Company introduced this model in 1929 and it was built until 1943, well it wasn’t really that simple. Allis-Chalmers Company had bought Monarch in 1928 but continued to use the name for several years(note the A-C diamond on the side). In 1933 the Model 35 name was changed to the model “K” and they lost the steering wheel and changed to steering levers in 1935. There were lots of other upgrades and changes to the basic model through the years including a diesel version. This model represents a Circa 1932 version for my Circa 1939 railroad so the machine is not to badly beat up yet. Anyway here is a couple pictures of before and after. 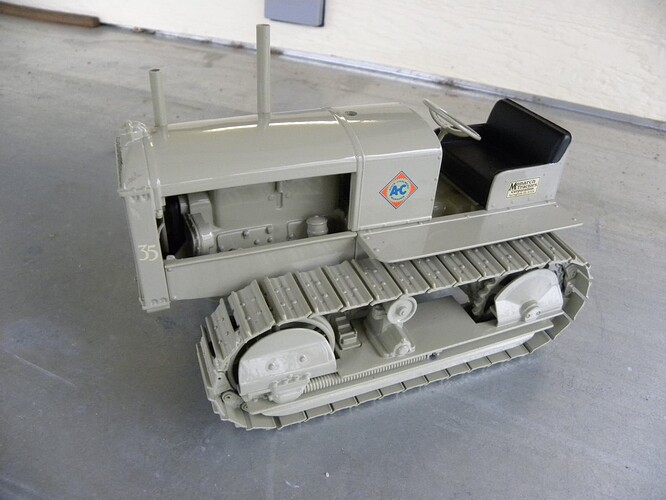 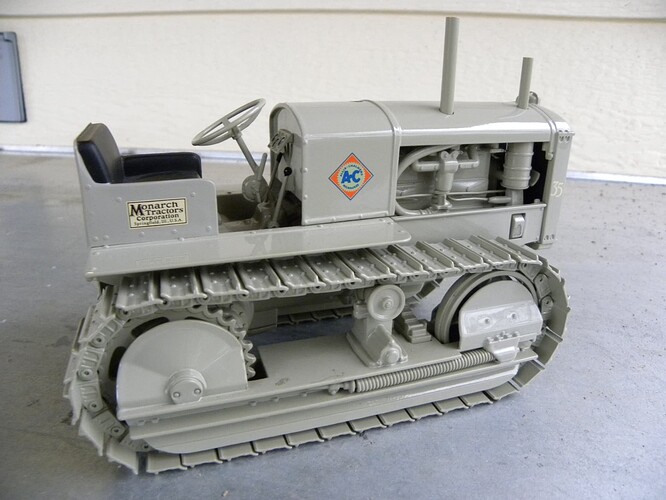 The only thing I really did was a little weathering with oil paints. The track was rattle canned then weathered with oils. Oh’yea, I oversprayed the whole thing (after dis-assembly) with Krylon Matte finish before starting the weathering. 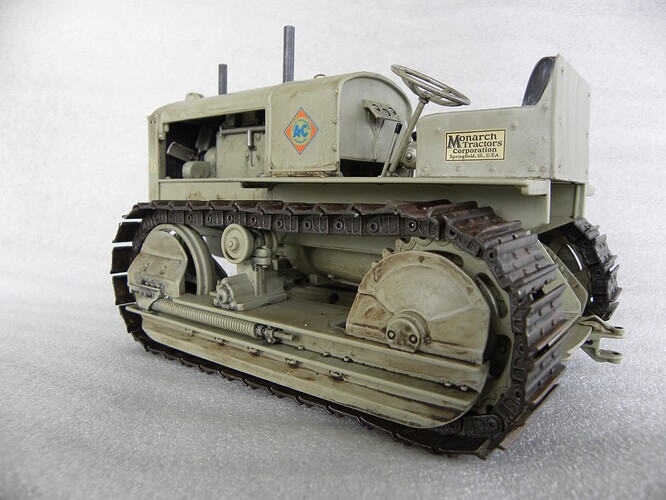 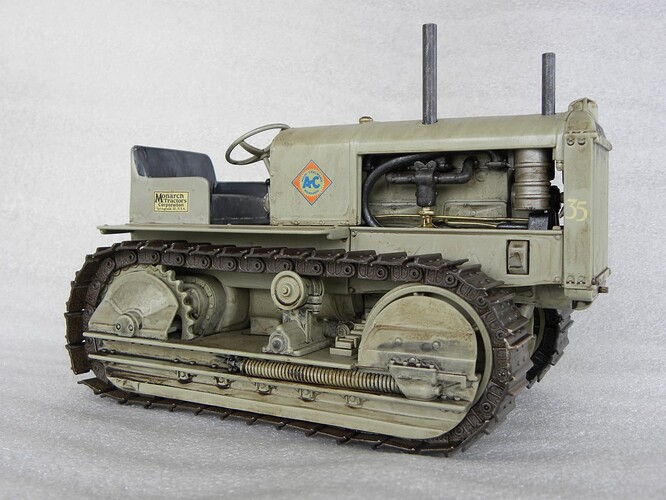 A friend had given me the depressed center flat a few years back, he had scratch built several of them, but they were 1:22.5 scale and were a little on the small side for my 1:20 layout. I looked at it again and decided it would work for this project. I added a new, wider center deck with side supports, some Aristo Craft Delton arch bars with Sierra Valley wheels, some KD #1’s and a little weathering color. Since this tractor can turn around basically in it’s own footprint I thought it was prototypically possible to be self loading on the center of the flat. I still have to build some gas drums and cable spools for the rest of the load. 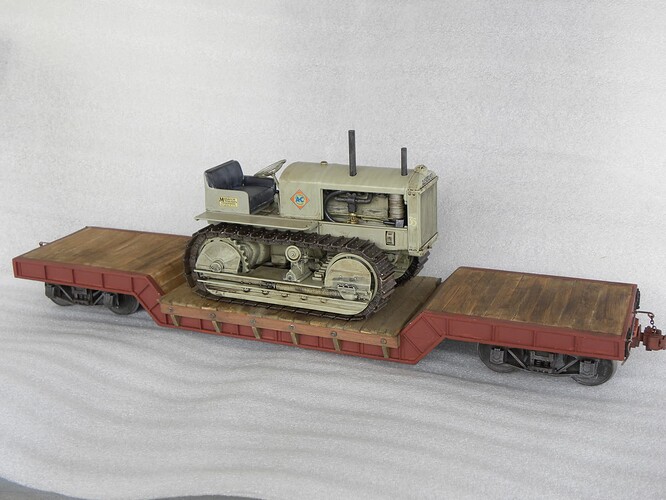 Thanks for taking a look. Rick

Nice model!
Now I want to investigate the prototype to find out how the steering wheel works.
Cats steer by moving one set of tracks at a different “speed” than the other.
That’s why they have a left and right steering stick. I’ve spent hours working with cats.

John Bouck said:
Nice model! Now I want to investigate the prototype to find out how the steering wheel works. Cats steer by moving one set of tracks at a different "speed" than the other. That's why they have a left and right steering stick. I've spent hours working with cats.

Bobcats are hydraulic--it's simply easier to use dual sticks to control those. I'm willing to bet these had some really awesome mechanical torque biasing system that a single control would work well for.
admin1 (Bob McCown) March 20, 2011, 4:53pm #5

If the tracks are driven hydraulically, then I can see how a steering wheel could open/close bypass valves to each side, to make one side turn slower than the other… Interesting idea, actually, to get a familiar wheel into something that doesn’t steer traditionally.

Bob- you are exactly right. On cheap [relatively] tracked vehicles the way you describe uses a pair of throttling valves to determine the amount of ‘slip’ on one track relative to the other. Some tracked vehicles that use this system, however, cannot turn in their own length by having one track going in the opposite direction to the other To do this a fully a regenerative system is required, which uses a pair of torque converters instead of slip rings and clutches. This is the system employed on some armoured fighting vehicles and up-market tracked civilian plant. Instead of a pair of levers they have a control yoke like an aircraft, or even like a set of motorcycle handlebars - see the Swedish StrV 103 [S-tank] or the very first of them all, nazi-Germany’s Tiger I.

Another beauty Rick. Having had the privilege of seeing your work in person I can truthfully say that it’ll look even better in person.

Rick very nice work. put a back drop on some of the photos and it would be hard to tell its not real.

Very nice tractor Rick! I bought one of those IH TD-24’s with the Kerry Arch last year. Got a great deal. Still have to “weather” it.

Great looking tractor and flat car. Would love to see how the flat car is built for a few projects of my own.

That’s what I tell people, anyway.

John,
Looks to me like someone has been to the Heidrick/Hays ag/truck Museum
Rick

Rick Marty said:
John, Looks to me like someone has been to the Heidrick/Hays ag/truck Museum Rick

Hi all, Finally got the tractor and car finished and ready to go out on the line. Here are a few pictures. 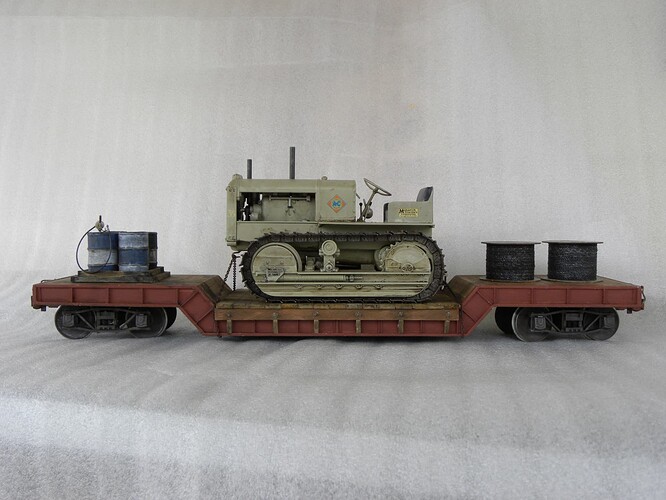 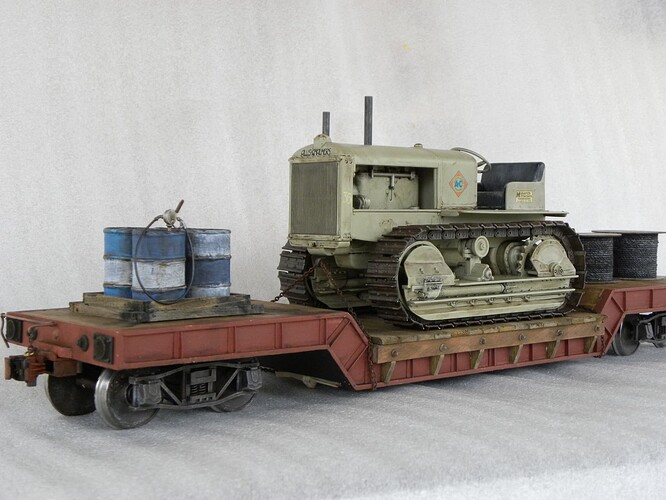 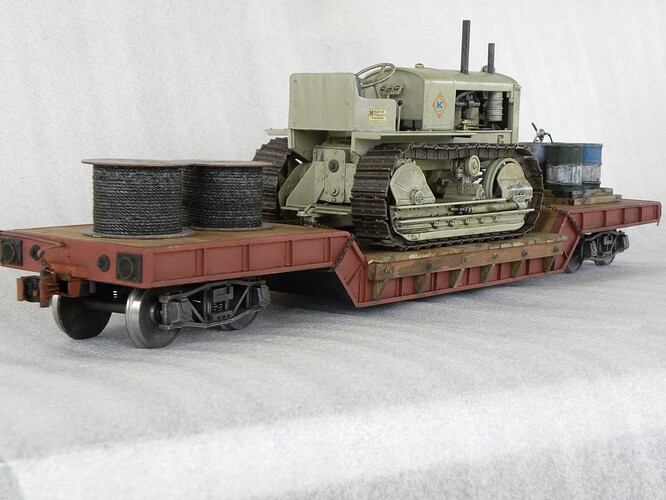 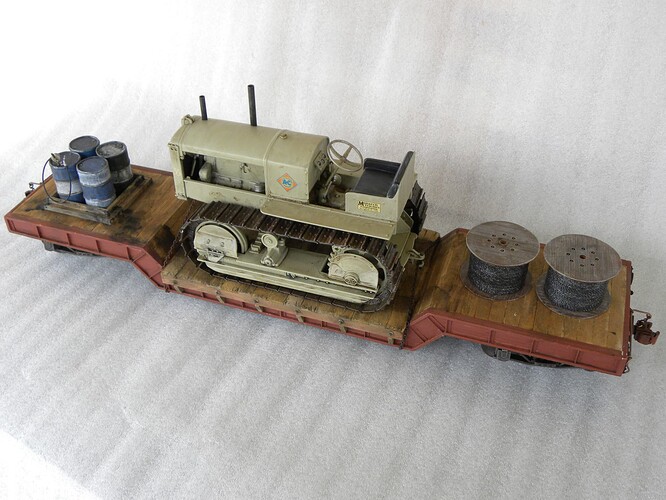 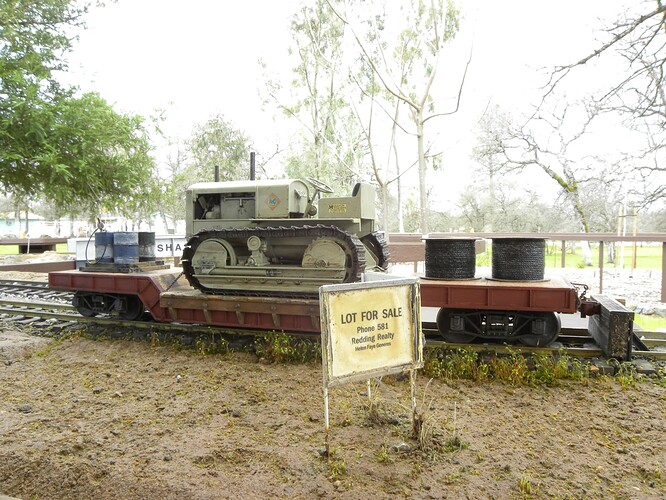 Thanks for taking a look. Rick

The car and tractor turned out very nice!

Beautiful! That last shot is terrific – if I hadn’t just read the whole thread, I would have thought it was a prototype photo you were using for reference.

I wish someone would make plastic kits of tractors and such. Die cast is nice but it’s rather expensive and nearly impossible to kitbash.

Pretty Kewl!
Did you make those wooden cable reels? Or are they available somewhere?