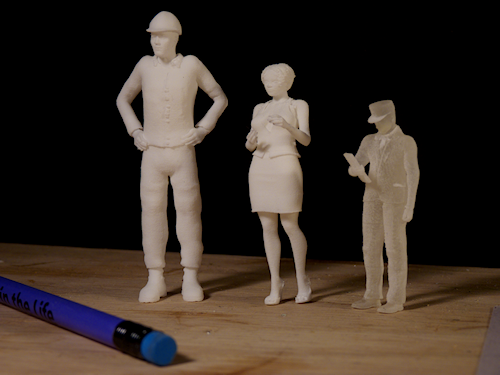 Hey, alright. I keep forgetting to look at what figures might be available via 3D printing, my brain is stuck at parts, and gaming miniatures.

Martin, I don’t know how this printing works. If a person were to give you a picture of a figure, like from a railroad magazine, could the printer turn it into a figure? say 1:24"? I checked out your website, and the prices range widely on the same scale figures for some reason. The 1:24 figure was like eight bucks. Sorry to have such primitive questions.

No, it doesn’t go directly from a photo to a printer. I use a program to create the basic figure, then another program to pose it, then another to model the various things like clothes, shoes and hats. After that I pass it through another app to ‘fix’ it and clean up any holes or imperfections, then I can send it to Shapeways. Shapeways is rather picky about the models and if there is the least thing wrong, they won’t print.

As far as a photo, I would use that just to get the ‘feel’ of the figure then it’s basically artistic license to get to the final form.

Most of the pricing is volume of material, the bigger or more complex figures are thus going to be more expensive. But sometimes it’s not really clear- for example, I uploaded a window and a door model and they came out waaay expensive, like $9 for a door in 1/29 scale. That’s pretty silly.

I am trying to get more adept at resin casting since that would dramatically lower the price but it’s harder than it looks. To get more or less ok models it’s not too bad but to get really good, repeatable results, I’m thinking I’ll have to move up a step and vacuum degass the molds, then pressurize the casts. I’m working on it…

My understanding, from discussion on a sci-fi game miniatures page, which then linked to news on Shapeways, is that the objects are built up within a support material and the cleaning off of that is a factor in both feasibility of object and pricing of object.

Now there ya go!

Our library has 3D printers (Makrbot 2) and allows anyone to use them. If I had your files, I’d be tempted to reduce them to 1:32 and print several to see how they turn out! Been pretty happy with the things I’ve made so far, including the start of the small ATSF station which used to be in Boron, CA.

My original 3D peoples experiments as stl files are on my site if you want to try them out.