A couple more thoughts that may sell her on the vessel sink. The theme of this trailers decor is rustic natural materiel’s and gloss black shiny appliances and things like outlet covers and switch plates. The dinette table is a piece of 1 1/4" blued pine live edge slab. I have ripped it lengthwise and will make an epoxy river table that will have natural river stone in the river pour with just clear epoxy. For the area above the counter the walls will be tiled with those tile sheets that have multiple “rocks” on them. Before you say anything. . .yes i am worried about the flexing cracking the grout. I found a grout product that is a sanded latex grout. I am hoping this will have some flex and give. This may end up being a disaster only time will tell. I am not sure any tile will stand up to as much movement as I fear the walls of an old trailer will have. In addition to this we are making all the drawer pulls from scratch using native river stones like the one I will use in the table. Plan to drill a hole in them and epoxy a piece of all thread into it and then a nut on the back side.

I say all of this because I have a couple thoughts now on a type of vessel that may intrigue her. One is to get a piece of blued pine in the round and turn a vessel and then epoxy clear coat it. While that may look cool I ma not sure that would be a good route to go labor intensive and then getting scratched. Since we are doing a polished/glossy black appliances getting a stainless or aluminum bowl and having it powder coated black could be cool. And the final idea would be to manufactured vessel sink that looked like stone such as something like this. 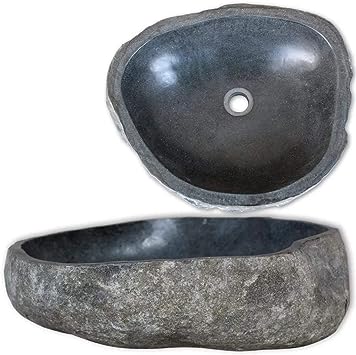 maybe some of these ideas will peak her curiosity.

Nope didn’t work. lol. Its traditional sink for us.

I know you mentioned you are not concerned about weight, and this is a much shorter trailer than my 30 footer, but I still cringe when I see all that heavy lumber framing! I pull with a mid-size SUV and my loaded weight is right around 5K. When I remodel I use plastics and aluminum to keep the weight down as much as possible. I envy your ability to use household construction techniques!

So it will be a bright stainless sink? You might be able to find an RV sink in black fiberglass to match the rest.

To keep this train related, you’ll need to build a replica for your railroad (https://www.largescalecentral.com/externals/tinymce/plugins/emoticons/img/smiley-laughing.gif)

Heavy framing? The cabinets are made from 3/4 pine with 1/2 tongue and groove panels. I am not sure you could use lighter materials. Its no heavier than the stock stuff we tore out. And considering the size of the trailer I bet it is nowhere near as heavy as your 30 footer is. And I pull it with a full size half ton. It certainly is lighter than my boat. It’s lighter than my utility trailer with a yard of dirt. It’s not at all heavy. I can lift the tongue by myself albeit with a strain. Axle weight can’t be much at all compared to other larger rv trailers that are on the road that are pulled with 1/2 ton trucks. I might just have to take it to a scale and see. You have my curiosity up.

(https://www.largescalecentral.com/externals/tinymce/plugins/emoticons/img/smiley-laughing.gif)Didn’t mean to imply that your materials were too heavy for what you are building.

Mine is a lightweight, just over 5,000 pounds fully loaded. All but the main frame is aluminum, roof and floor are 2 sheets of .25" Luan laminated over about 1.5" of Styrofoam. Walls are the same except fiberglass laminated to the outside. Interior walls are .75" x 1" framing with very wide spacing and .25" Luan as the wall surface. The heaviest part are the cabinets, except for for fronts I believe they are .75" MDF.

John, there is no doubt newer trailers are much lighter today. And I would be a whole lot more concerned if I was doing a trailer much larger than mine. Its one of the reasons they can get away with making the monstrosities that they are these days. Could you imagine a 32’ fifth wheel made out of the same materials mine is made out of??? I am only using the materials I am using because the trailer is only 16 feet long.

I have thought about and still very much want to build a trailer from scratch. I have a set of plans for one. I think it would be a very fun project and I know I have the skill and means to do it. And if I were to do itI would very much build it as you suggest. In fact the plans call have directions for both a plywood side and a glass over foam panel. I am intrigued by the glass over foam. If I could weld aluminum I think it would be a very nicely built trailer to have an aluminum square tube frame with foam core fiberglass panels. The panels would be very structurally sound and stiff and I would think would need very little bracing, just at seems and top and bottom. Not to mention that you would use very little wood except in the interior and it would be virtually rot proof.

But I digress, I am not building a trailer from scratch. And I have done little to no framing other than to replace dry rot and then I had to replace it with the same dimensional lumber that it was made out of which is more or less a 2X2.

I took/take no offense to your comment. It is a legitimate observation and discussion. One that was weighed and I determined I am not in any danger of making this thing to heavy for my use. I wouldn’t recommend towing it with a 1980 Toyota Corolla. But I am fully confident that my 1/2 dodge won’t be over loaded. And at the end of the day that’s all that matters. I do stall have a minor concern in this regard. There certainly is over kill especially with the OSB and a little bit of 2X4 construction the previous owner did in the bed area that we chose to leave. So I don’t at all mind the questions/advice/comments/concerns. I am not the end all expert by any means. I could drive down the road and end up with a lumber sale on the freeway. I don’t think so, I am not worried, but I also have never constructed a travel trailer before.

When you are all done, before you load in your personal belongings, water, propane, etc. you might take it to a truck stop that has a CAT scale. If you plan it in advance, you can get very accurate per-axel and tongue weight figures. Then do it again loaded for bear. So long as your weight is well distributed and/or concentrated over the trailer axle(s), it should be pretty stable. What you never want is a heavy tail and light tongue, or the other way around.

A weight distributing / anti-sway hitch is probably a good idea even if your unit weighs in light. Personally I use a Hensley Arrow which probably costs close to what you have invested so far! It is a unique system that completely eliminates sway. I have been in several very dicey situations including panic stops over the 15+ years I’ve been towing mine with an SUV where I am right at the edge of the vehicle’s rated capacity. Never once had any sway or control issues. You might also look at Jim Hensley’s latest version at ProPride.

Looking forward to progress updates. Put a shelf layout in it somewhere to keep this thread train related (https://www.largescalecentral.com/externals/tinymce/plugins/emoticons/img/smiley-cool.gif)