The Bachmann G gauge Switch Stand #94648 was very much to my surprise very nice looking and works with smooth operation. I thought the scale would be way off, but it does look fine on my somewhat standoff scale shelf switching layout. The video does make it look bigger then it appears in real like. https://www.youtube.com/watch?v=pFIvvKHlXME I intend to put switch lamps on some of then and wire them with LED’s for a more life looking appearance. I realize these may not work for many, for many reasons, but if you are into manual switching give them some thought, they maybe just be what you are looking for.

I’ve been slowly converting over to them from Aristo throws for a few years. Bought two master cases several years ago!

With a little friendly persuasion, you can push an Aristo lamp on to the top of the target rod. Lighting that and disguising the wires might be a challenge! I did experiment with putting a 12V grain-of-wheat bulb in an Aristo lamp housing. It worked great, for a few weeks. I like to leave things lit up all night every night and am finding that bulbs do not last, so slowly converting all to LED.

I’ve replaced a few of the Temills with the Bachmann switch stands. They’re a bit of a pain installing them where the old ones were but well worth the effort. 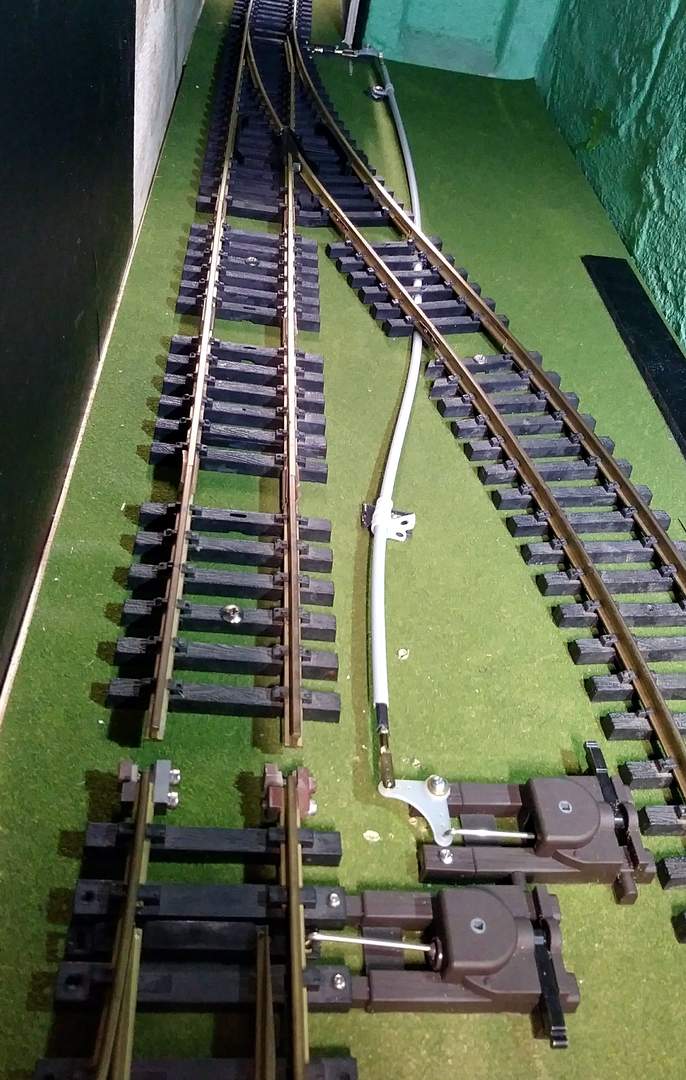 The big roads also do similar arrangements. Some of the switches in Belleview (OH) Yard were too close to accommodate both switch stands, so one switch throw was set one or two tracks over but numbered appropriately. The throw rod ran through large diameter conduit. I observed this when stationed at that yard during the 1978 BRAC strike.

Thanks. I have been weighing replacing my LGB switch mechanisms with these. A few of the former have worn out. Any idea if they will hold up outside? Also, do you think the signals would stand up to the occasional test of strength with a 42# dog or over curious human visitor?

came out with them… Have had one failure, but I can’t count how many I have over

The deer and cows haven’t stepped on a switch yet, only track… (http://www.largescalecentral.com/externals/tinymce/plugins/emoticons/img/smiley-cool.gif)

Eric, I would think that the target post would not holdup outside, probably because they are plastic and any banging, or bumping them the target post would most likely break. Since the target post just sets in the base you could take them out and just place them in place on run days, etc. My layout is inside, so I think they will be ok, except for my cumbrous working around them, this is where I might remove the post when working around them. I do think that they are a winner and the operation should holdup outside as others have said. You will have to cut a notch in one of the ties on the large LGB switches, as the tie next to the notched one is not cut, the smaller LGB switch does have the two notches in the correct place, note, very easily done.

The posts are metal and do not break easily. That said I put one out on a raised section thinking it was safe. It did not last even one ops session. Still can not figure out how it broke.

From time to time I will put a few out in places that I think are safe but alas our operations find creative ways to break them off.

On our modules they have lasted to date (knock on wood)

Oofff-dah…Lots to think about. The LGB manual manual drives are about $17 for a two-pack, or about half the price of the B’amm swich operator. The B’mann target posts (thanks for the new vocabulary!) were part of my consideration. I have a couple months before my “strategic parts order,” when I try to get actual and anticipated repair bits in one go to save on shipping.

I appreciate the food for thought!

The posts are metal and do not break easily. That said I put one out on a raised section thinking it was safe. It did not last even one ops session. Still can not figure out how it broke.

From time to time I will put a few out in places that I think are safe but alas our operations find creative ways to break them off.

On our modules they have lasted to date (knock on wood)

Thanks for the update, I did check and the post are metal, but doesn’t really matter too much when being used by operators who are just fumbling around and not paying good attention to what they are doing. I would say just about anything sticking up from the ground, or structure is subject to being damaged. It’s just what it is and using the post outside would probably not be good for run days. Shop for a good price, I purchased mine on ebay for a little over $14.00 each and very reasonable shipping, so shop around for best price.

There is what come in a package, you have a choice of 3 standoff distances and 2 point throw distances. positive locking with the ground throw. I just got 10 of them, now to go install some I did the fix on a newer switch and a new Bachmann switch stand. It now works as it should, still have to modify the rest.

I did the fix on a newer switch and a new Bachmann switch stand. It now works as it should, still have to modify the rest.

I did notice that my LGB switches have very thin plastic on the points connecting bar, I would think that they would break under most switch machines, especially the LGB electric ones. I was also thinking that these bars will need an upgrade sometime down the line. Also for outside use I see you added a plate under the switch machine (stand) and the switch point bar, I can see that this is needed for stability of the two, good idea.

A fix for this

“Also for outside use I see you added a plate under the switch machine (stand) and the switch point bar, I can see that this is needed for stability of the two, good idea.”

John, I now use 3/4" PVC board under all my switches. It provides a stable base and helps to keep debris out of the moving switch parts.

I’ve swapped out most of my LGBs for these mechanisms. They work extremely well. The positive throw means the rails are always aligned accordingly with the throw. Something not always reliable with the wimpy LGB springs. The only disadvantage is a positive throw means the rail stays solidly in place when the train rolls over a closed turnout. I only put the indicator posts on for special occasions, IOWs there still in a bag.i really like them.

OK, this may be a replace-as-I-go thing I order as need and opportunity arises, sort of like that bag of railclamps I get with my episodic repair parts order from TrainLi.

Since my layout is indoors I’m going to add switch lanterns to some of my Bachmann Switch Stands. Only the ones on the mainline will have them, pretty much as the D&RGW Narrow Gauge did back in the day, siding not so much from what I can see from pics. I’m pretty sure I’m going with the Ozark Miniature’s ones (#0098), I like there size and just more to my liking. I will also replace the stand post with a brass square hollow tube that will fit into the Bachmann base. These OM lanterns do come with the deflectors, so I will not have the targets on the post with the lanterns. This is just to give the layout some different looks, if all looks the same it takes on the toy like appearance. I will power with one 9v battery for all the lanterns (6-8 total) and will use the 0402 LED’S in the lanterns. so this should work out just fine as I have done this before with other lights. If I was doing this outside I might consider the Aristo-Craft Lanterns as there size would blend into the layout better, where most things are oversize and scale can go somewhat unnoticed.