Planter edging, and other things that get in the way of layout work

Cool, I just found that one can change the thread title!

Actually getting out of school tomorrow for summer break. It will be interesting to see how many railroad projects I can get done this summer.

Is it railroad related if I’m clearing the area that future railroad will occupy?

Linda helped me out big time today, with finishing the dry wash “river” on the south end of the layout, and some epic weeding on the terrain north of the layout.

The “river” rocks received a coat of gravel and pebbles (unused from other projects) and sand. The rain should rinse the sand off, but here’s how it looks at the moment. 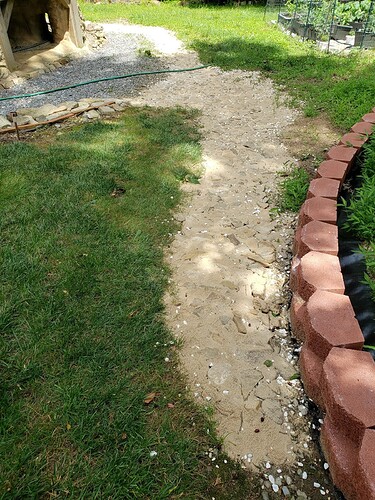 Hopefully, tomorrow will be finishing the mountain hatch repair and starting on rot abatement & repair.

Doing a bit of that today too. When the painters removed a large Cedar planter from these supports, they showed signs of rot. They are too nicely made to trash, so I’m trying to save them. 2nd coat of hardener went on tonight. Tomorrow I’ll use an oscillating saw to square it up enough for a Cedar wood patch, then Bondo filler. The less damaged one might just get filler. 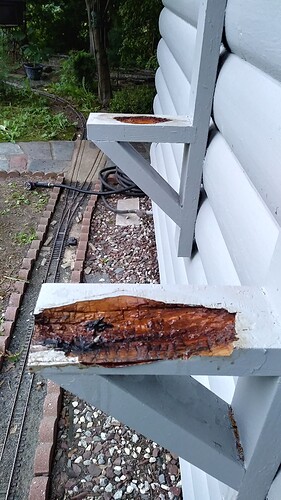 Wow, that’s impressive! Is the state making you clear a certain radius from around your house?

Seems like too much for firewood… Are you able to sell the logs?

No state mandate, but the insurance companies get on you. State Farm cancelled me several years ago because I wouldn’t make my driveway 2 lanes from highway to house, that would have cost a small fortune! They claimed it was necessary for fire equipment. No one up here has 2 lanes, they were just looking for an excuse to cancel…

Way too much firewood. At least 5 years on the ground now, probably 6-7 by the time I finish this round of clearing. None of it is “lumber quality”, much of it is beetle infested… I try to give away as much as possible, but its a glut on the market up here.

The area around the storage buildings is cleaned up. Gonna rest a few days, then time to tackle the forest to the west of the house. Probably another 3-4 weeks of work. 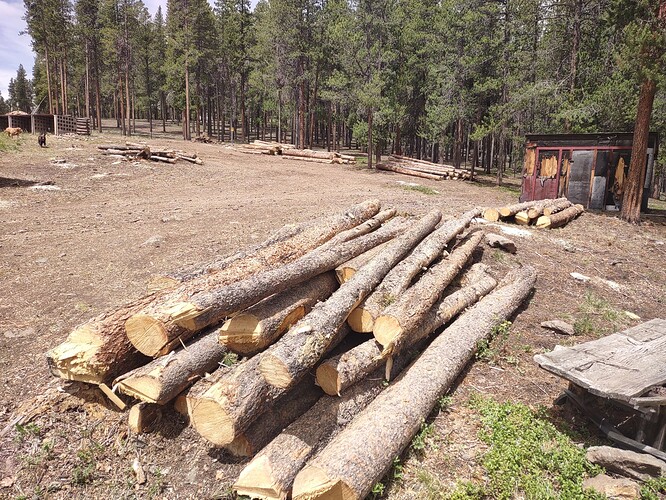 That’s some acreage Steve! Thanks for explaining the situation, I hope you either find a use for the logs, or a good spot (or 10?) to let them decompose in peace. I suppose a personal sawmill is out of the question?

Back to the mountain tunnel hatch today, starting with removing rotted material. I thought I’d done that, but found more. And more. 3/4 of a day later, I’d gotten down to salvageable wood, treated it, filled it, sanded that, and replaced what I’d had to remove. 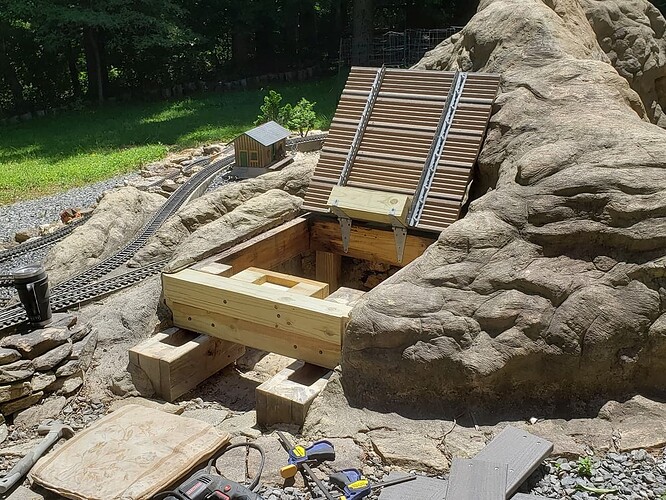 Then came priming every wood surface I could see / reach, and then painting all that. And finally got to what I thought I would be doing this morning: screwing down the trex boards. 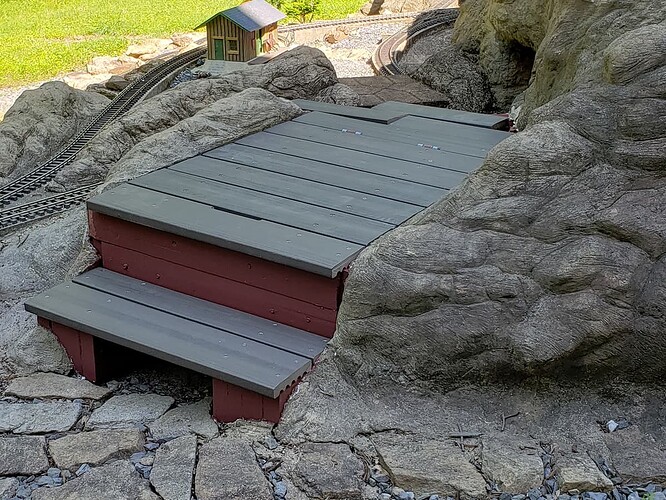 Need to get 1 more length of that, but the pic shows basically what it’ll look like.

OK, that’s all I got today… But I have 2 other serious repair areas, unfortunately. One of which needs solving now, and therefore displaces the trestle project again.

But as this restroom sign I saw yesterday says, “Whatever.” 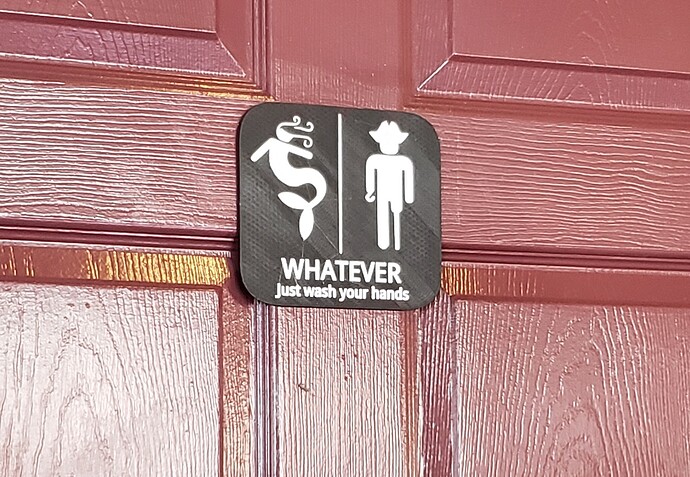 Wow. Were you in NeverNever land? Or did it just feel like that? Are you ever planning to grow up? Oh I hope not!

Looks like yours was a lot more than I tackled today, but it was fun! 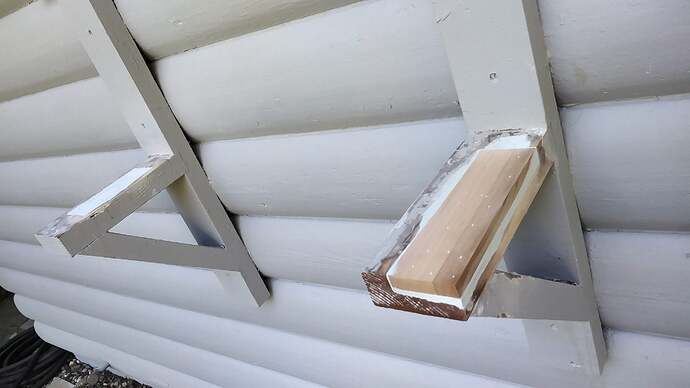 These planter supports pre-date my moving here in 1990. They are too nicely made to just scrap.

Sorry had to say it but he (Cliff) invited you into it !

Nice filler board Jon. Is that epoxy putty?

Got the final deck boards done today, so the hatch rebuild is officially completed. For now. 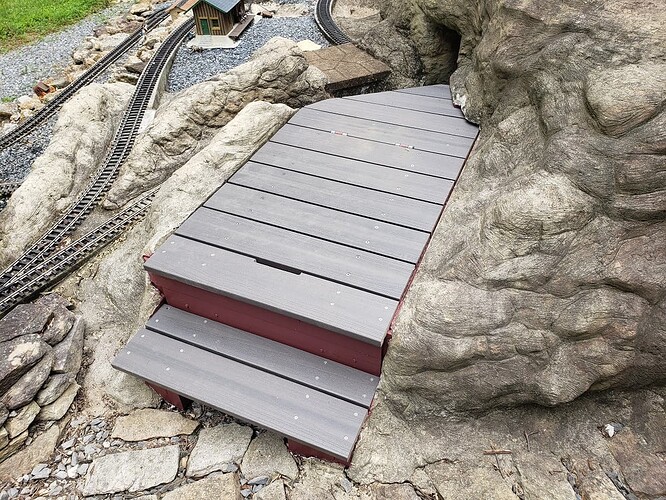 Is that epoxy putty? 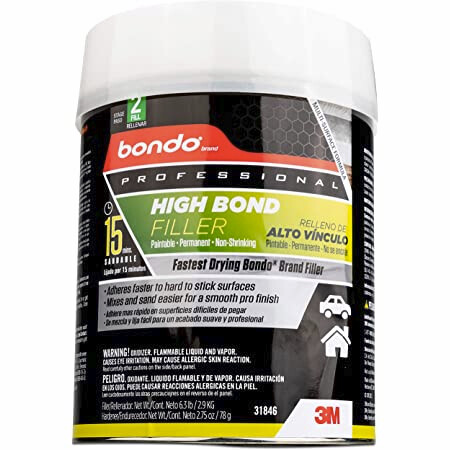 Some small pieces of Cedar underneath then filled with this Bondo and while still wet the Cedar board on top was brad nailed on. More Bondo on top then aggressive sanding with 80, then 120.

Thanks Jon. That tells me I could have used much more real wood filler (blocks) and spared a lot of the epoxy filler. Lesson learned!

Yep, that’s why I do it with a patch piece. Just need to anchor the patch solidly. The filler alone will not hold it in place.

Yesterday I started on the other areas of rot, all in a certain deck area I built around 11 years ago. The 2x6 railing bits had rotted in several places, two of which penetrating a post beneath. So I started with triage, and the deckish equivalent of debridement (trust me, do NOT do an image search with that word!). So, t’weren’t purty. Kinda worse than I feared. 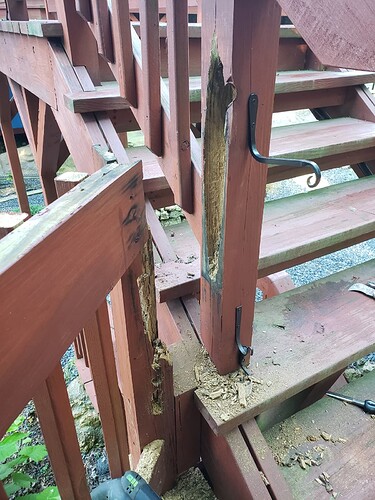 The good news was that the post rot hadn’t gone further down than the lowest drill hole (on the lower left), so the deck’s structural integrity wasn’t affected (yet). The bad news was that so much of the cap 2x6’s were compromised that I was compelled to take them all out for replacement. But that helped me see what other post tops were affected, and in need of preventative care.

Here’s that main problem area after 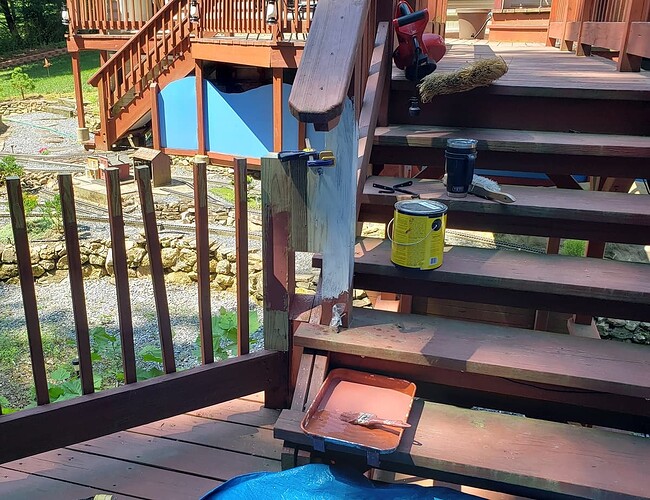 This morning involved replacing the 2x6 cap boards, including sanding and routing. Then a few rounds of painting of the main problem area and all the new rail cap boards (that uppermost ring around the “tower” deck). 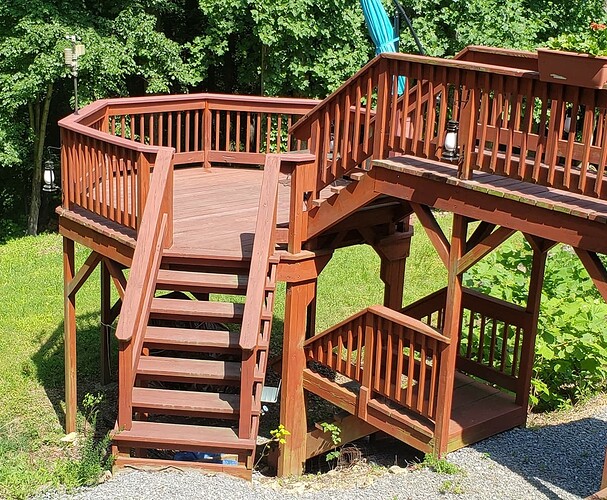 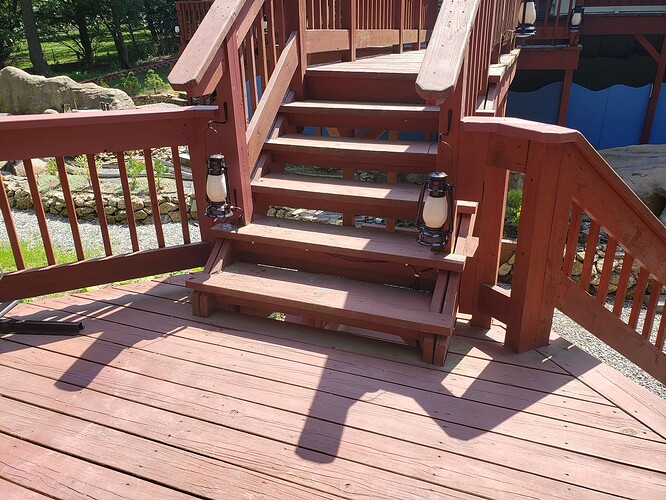 Next year I’ll probably have to do a lot more replacement of cap railing boards, with rot remediation as I go. Which is a serious buzz kill. But I’m glad to be over the voodoo hump, and familiarized with the products and methods to deal with this crap.

How come wood rots so fast over on the east coast? Or is this deck really old? I feel like our decks out here on the wet coast last longer…

Oh and I had to check it out. I’ve seen worse.

Craig, all I know is that our main deck, which was built 25 years ago, doesn’t have these rot problems. I suspect the pressure treatment process has undergone some “value engineering” since then, resulting in a much inferior protection. But that’s just a guess.