I was looking for a park ranger (around 1/24 scale) to go with a Chevy suburban I’m making forest service decals for. The best I could find was a state trooper made by American Diorama.

I used craft paints to change his police uniform into a park ranger. Here he is along with a police buddy to show what he used to look like: 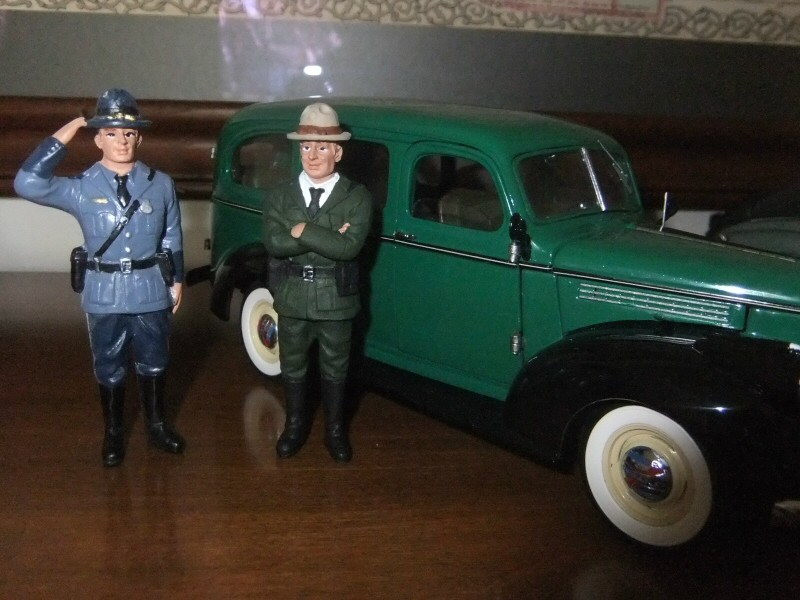 Since I was placing an order for the park ranger figure, I got two of the newer greaser girl figures too. A tad too modern for my 1951 layout era. But I just couldn’t resist 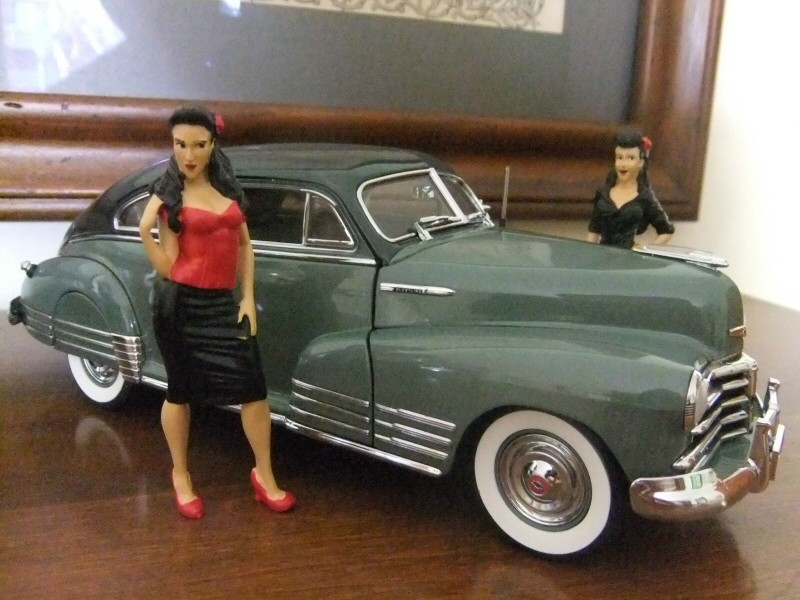 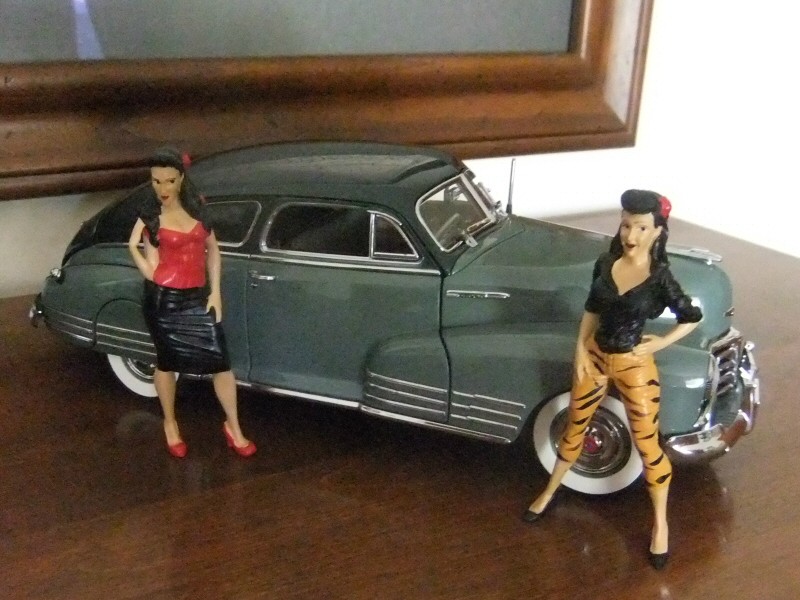 Matt You’r out of touch with reality… I know that there are no girls like that on your side of Vallecito lake. And the new thing is pink hats for park rangers, Oh ya Glocks also.

Didn’t really like the pants on the one girl…so:

And Dave you’re right. There are no gals like this way out at Vallecito.

I hope to liven up this part of the layout with them: 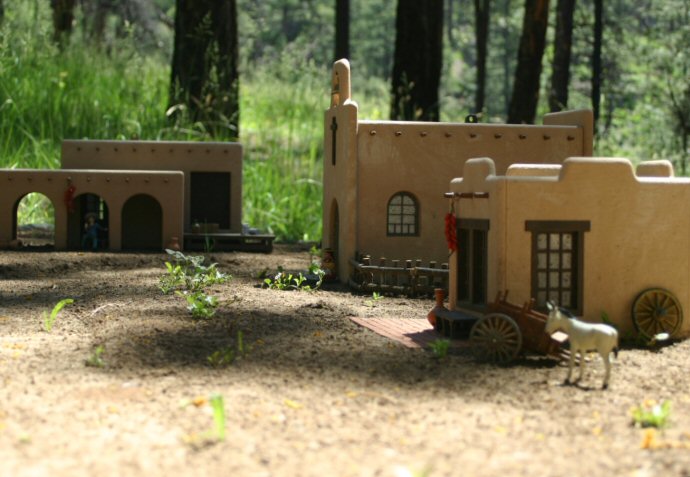 You really show how a little paint can change the perception of a figure. What looked like a very current era girl was transformed to 1950 by just changing her pants. At least she is much more believable. Same with the ranger going from cop to ranger. Nice job.

Thanks Devon. Amazing what some paint will do sometimes. The black outfit with turquoise belt was somewhat inspired by one of Marilyn Monroe’s outfits in No Business like Show Business: 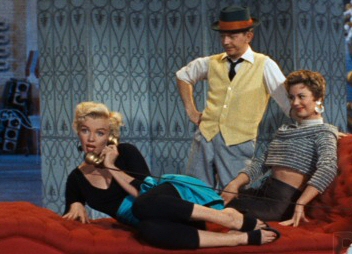 I couldn’t resist getting one of the greaser guys. And then I had to get him a bike (1936 Harley Davidson). One thing I’ll be doing is giving them a dull coat spray to tone down the shiny look. The girl I repainted and the park ranger look better with the flat craft paints. 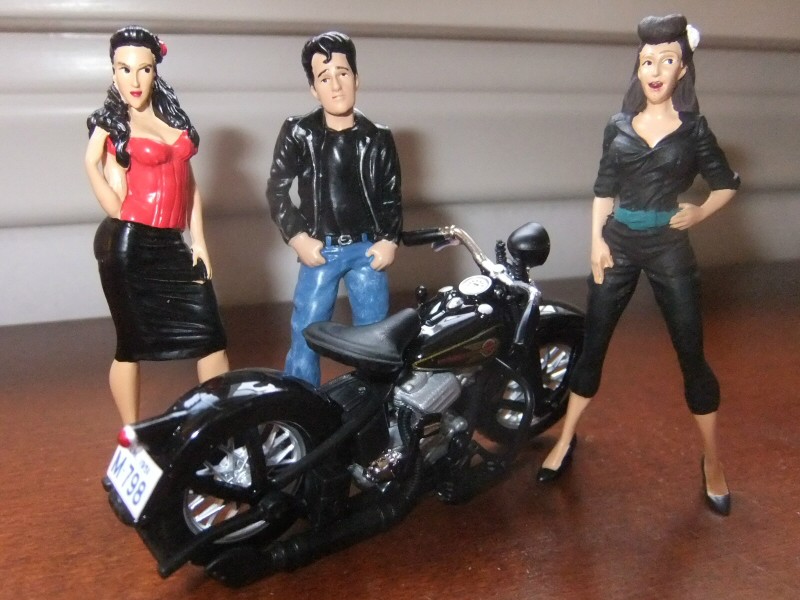 Yeah flat is better unless they are wearing patent leather. My figures need some dull coat. Glossy just looks wrong. At any rate live the look need a flat head 32 ford roadster nothing says fifties more.

They flatten out fast with the hard water we have here.

What does? The paint or the girls, ah, figure?

Suleski Transportation has a Park Ranger. We found her with help from John at Just Plain Folk employment agency.

She works at the Blue Moose National Park.

We also have our very own company Doctor. Of course sick call was very full the first two weeks She started work. Our EMT’s were called in to assist and miraculously everyone started to go back to work. 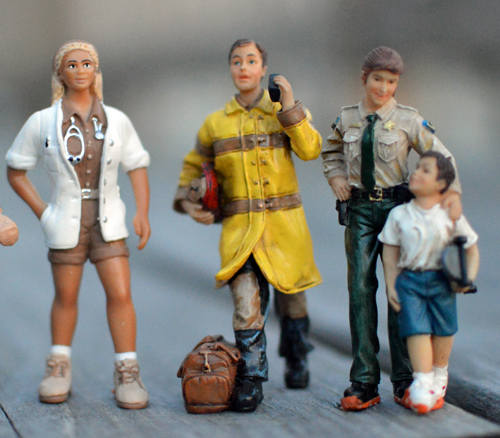 Matt, what era are you painting up the vehicle for?

Matt, what era are you painting up the vehicle for?

Not really painting, just adding a forest service decal on the door.

Suleski Transportation has a Park Ranger. We found her with help from John at Just Plain Folk employment agency.

Nice park ranger. Too bad there were not too many (if any) female Park Rangers in the late 1940s - early 1950s, so I had to get a male. And when there were female Rangers (think around the 1960s) they had to wear a completely different style of uniform. Almost flight attendant style.

I’m pretty sure I saw your female Park Ranger figure when I was searching online for suitable figures. I also found another nice figure but he is too big (4" tall). I think around 1/18 scale:

They flatten out fast with the hard water we have here.

What does? The paint or the girls, ah, figure?

Okay Matt. I was going to say that if your modeling mid 50’s or earlier, the vehicle was a dark green that almost looked black. Seamist Green didn’t show up until the late 50’s.

Schleigh makes a figure that could fit into the park/forest ranger look.

US forest service. That was my bad in calling him a park ranger. He really is a forest ranger like you mention. 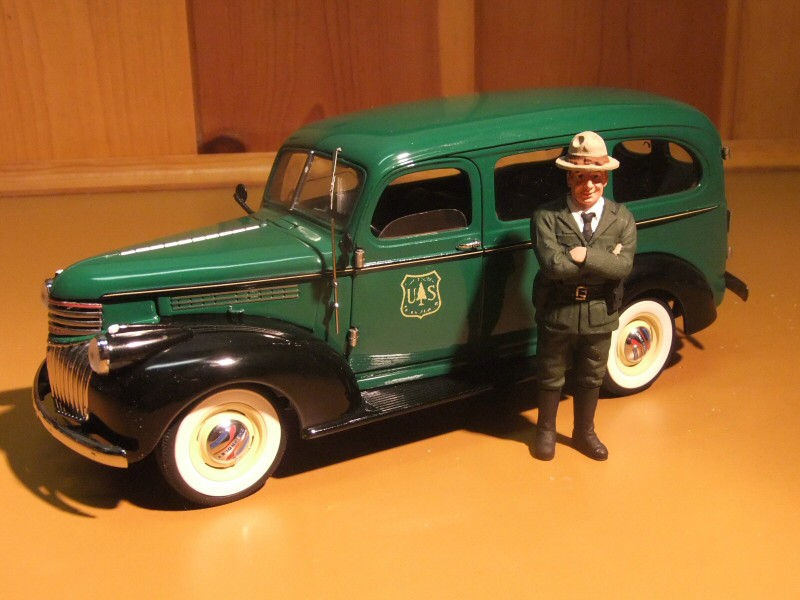 Got them out on the layout: 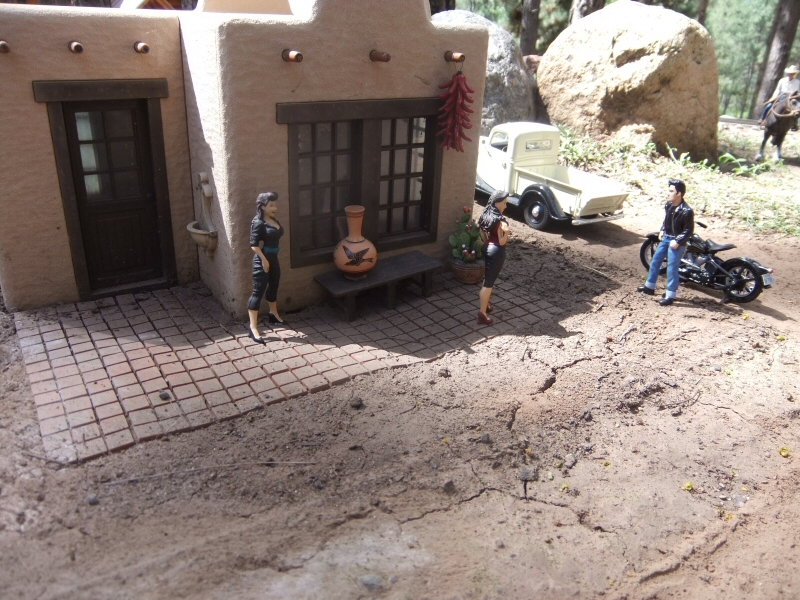 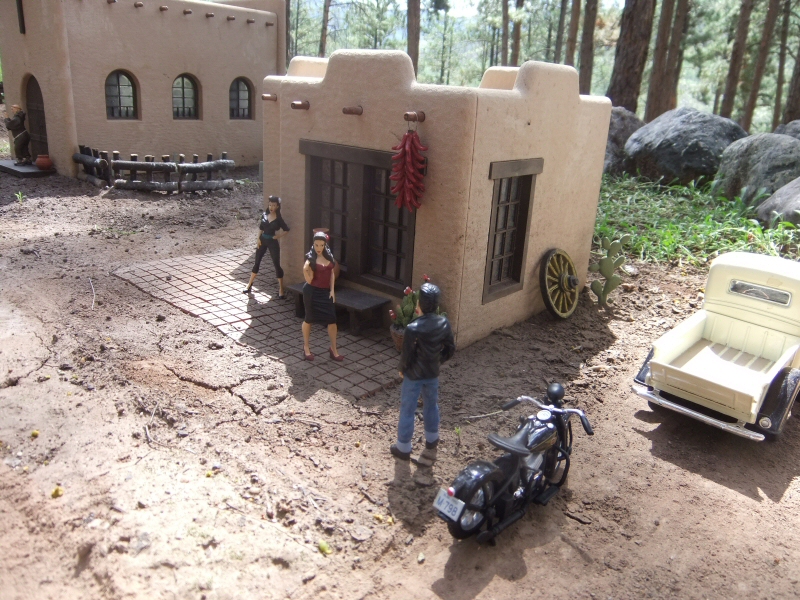 Why does the biker look like Elvis in that picture?