So I have been roped into helping a great guy who was an obsessive G scale guy but downsized to On30 indoors. He is the one who convinced me to go On30 indoors instead of doing my 1:24 layout indoors. Anyway his favorite locomotives is the converted Unitah narrow gauge Mallets after they went to Sumpter valley and had the side tanks removed.

As a model he likes the shorter 2-4-4-2 as opposed to the longer 2-6-6-2. But he did not like the wimpy skinny boiler of the Bachmann model and I had to agree it is too small. Well I have acquired one myself as do a couple others in our G scale club and we are all kinda wanting a larger boiler. There was an article in one of the On30 Annuals were a guy made a larger boiler with pipe. Using that as a starting point I set out about designing a new boiler for the Mallet. One thing with a larger boiler, the cab needed to be raised. And also a redesigned firebox. The guy in the article cut the old firebox off and just reused it. Great easy make shift solution but at the end of the day its way to small for that large of a boiler. So I made a boiler similar to that of what is on narrow gauge 4-4-0 and 2-6-0 locos where the fire box sits between the drivers and it much narrower.

The first attempt needed some tweaking upon a test fit. So the second draft is being printed by Mike Williams today. But here is couple computer renditions of what the second draft will look like. 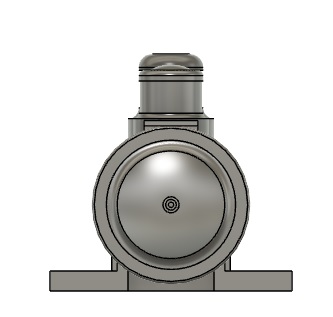 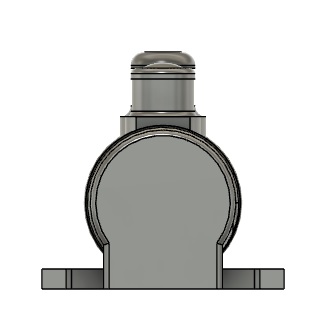 I will use a combination of salvaged parts from the Bachmann and new parts from Wiseman to give it some detail. I will post a picture after I get the boiler fitted and then when its done.

Final rendition of the boiler is done and the first one printed. It took 4 tries to get the design just right. But it has a great fit and looks good. I will show the finished build once its done. I have two to make. 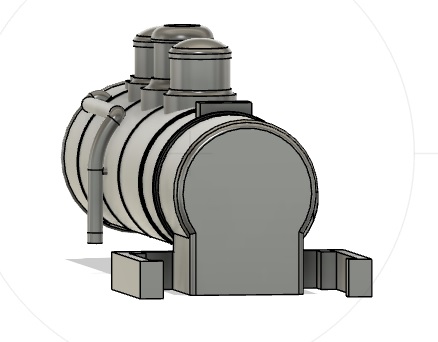 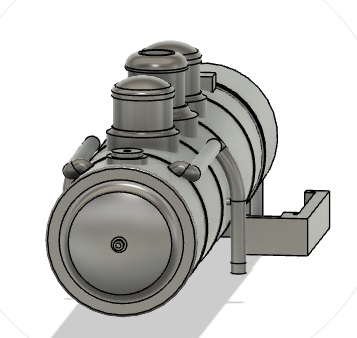 Looks great, Devon. Your design skills are improving with each new project. I’m looking forward to seeing the printed product and the finished locomotive. I’m sure your client will be pleased.

Devon has a client and does it involve a tricock ?

Ah, now I see why you like On30: those parts fit in your Photon, haha!

First of this is not a client. Its a good train friend and if I don’t make this for him he will call me every single day until I do.

And I appreciate the Kudos and compliments on my design skills it was a hard steep uphill battle but I think I finally have at least enough skill to accomplish most things. But every once in a while I get stumped. Thankfully Dan knows absolutely 100% everything there is to know about Fusion 360 and is a great teacher with printed study materials.

Here is the new printed boiler along with the old one for comparison. 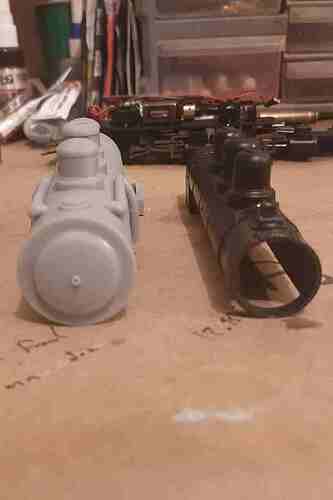 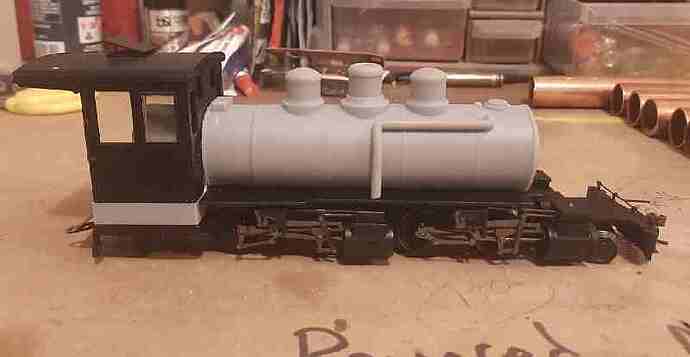 But why not show a picture of the print BEFORE the model is done?

It ain’t even close to done. . .but I take that as a complement of it already being nice looking

The pictures of the print were not showing on my computer earlier - but now they are.

That sure shows a LOT of work - well done! It looks great!

Nicely done, Devon. I too like the larger boiler now that I see the original and your design. Gives the engine a sense of strength and power.

That’s probably the first time ever that somebody said I made any sense!

That’s probably the first time ever that somebody said I made any sense!

Devon was just being nice, Bruce, he can’t help himself, lol. 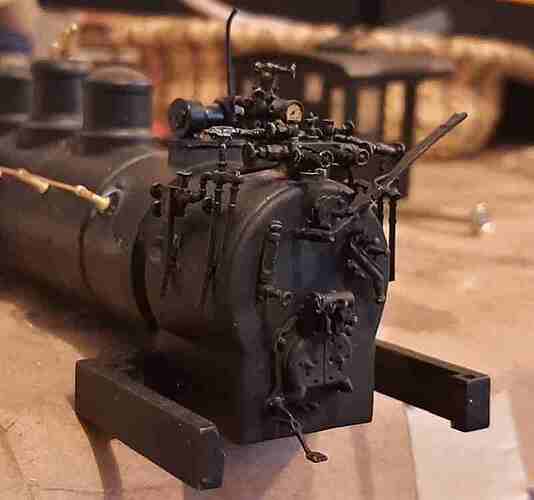 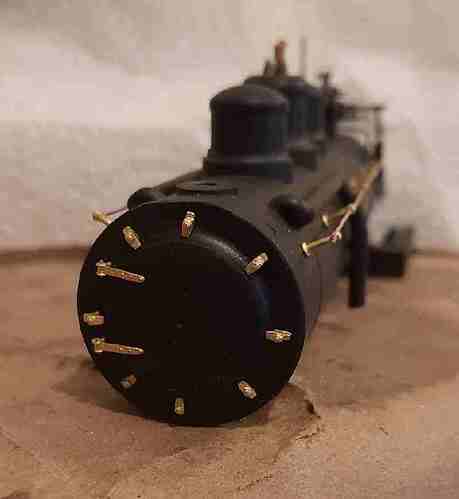 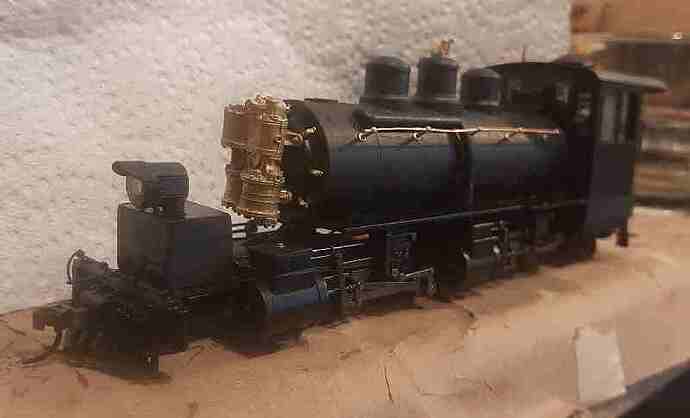 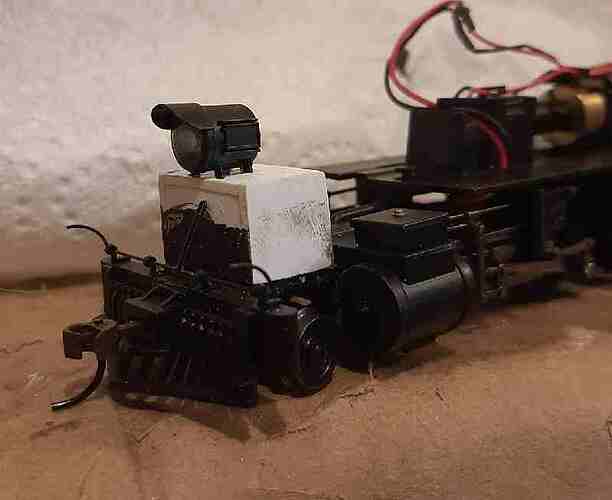 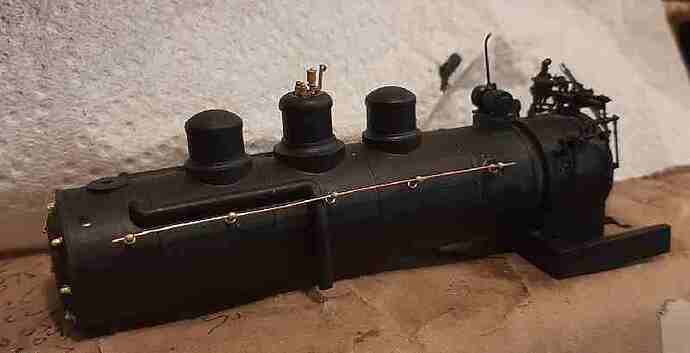 I made the weight box for the front and moved the headlight up there because of the cross-compound air compressor. I had to cut the plug end off and route some new wire and solder it all back together.

All in all I am very pleased with how this is turning out. I am going to add an air reservoir on the engineers side walk and then add some brake plumbing, and injector plumbing at a minimum. We will see what other plumbing shows up as I keep working.