I built this train years ago, and finally got a chance to video it.
The loco is an Accucraft K27. The tank on the flat, skeleton, wheel and tie, and coach are all Accucrafts. Everything else is scratched built. 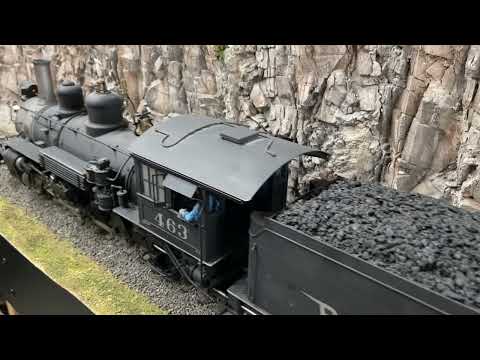 Very nice, and a great setting for the video. Just need to cover that screw in the ties with a rock or something and it would be hard to tell from the real thing.

Amazing work, John. Again!
Thanks for posting the video.

Parts were from several suppliers. I talked Phil Dippel (Phil’s narrow Gauge) into selling me sheets of scribed plywood that he adds to his kits. He also sold me a case of Accucraft trucks and wheels, which they all ride on. Plus other bits and pieces.
Ozark, and other casting suppliers.
I built Derrick OP and idler flat from plans I found in Narrow Gauge Gazette, (I think). Plus I have a Quick Book on the derrick. The other cars were from plans in the D&RGW rolling stock found in “A century + Ten D&RGW Narrow Gauge Freight Cars” . Plus other D&RGW books I have.

I take it you mean they are bashed from commercial models, not built from the ground up?

Peter, except for three they are built from the ground up. That means scratched built. Three are kit bashed.