I’m looking for those with specific Heisler experience. I’ve been looking for one for awhile and finally picked one up. The PO has done a bunch of mods. Some I may keep and some won’t. Personally I prefer to keep them mostly original or easily able to return to original. For example, I happen to like the firebox flicker so I leave it. I know you can’t really see it much except when looking right at it, but I like it. It was removed and there is a piece of plastic covering it. He had an Airwire 900 in it which I won’t se since I am going all to RailPro. He cut out the large scale switch and replaced it with appears to be a charging jack. Which I don’t understand since there is another charging jack in the rear. I thought there might be a second battery in there but when I pull off the front, I don’t see any and can’t really tell where the wire go. It also appears he cut the wire going to the cab lights and I don’t see where they are wired to the Airwire, just left cut. I’m getting the feeling the factory guts are all gone. But I want to verify that.

So first question is after the cab roof/bunker is off, what is the easiest way to get the shell off? I studied the factory drawings and it’s hard to tel, if I have to take it totally apart or not.

I need to chase the cab light wires to figure out where exactly they are supposed to go. The red and black on one side AND the red and yellow on the other side are just cut at the base. 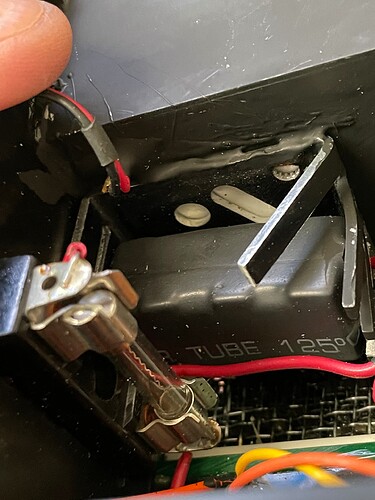 Anyone tell me what this is? It has a heat sink or at least that is what it looks like to me.

Here is the Airwire 900 board that was in it. What’s it worth? 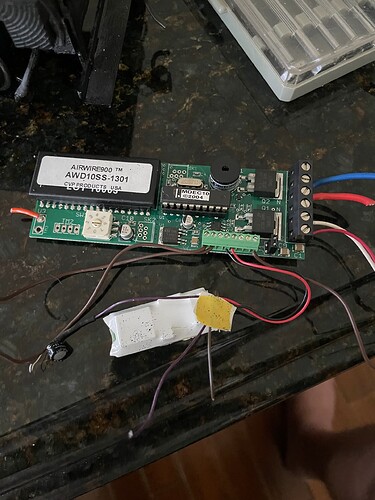 do not know what the Airwire board is worth as Airwire will not repair because they consider obsolete and will not repair boards in general unless you are the original purchaser. so if you have no way to test your best bet is to give to someone using Airwire, and have them test.

Anyone tell me what this is?

Obviously a Flux Capacitor for when you want to exceed the speed of sound.

And just discovered a broken front truck mount. It does run but I’ll have to take it totally apart and try to figure out if/how to repair the mount. It is right where it attaches to the frame. Should not have bought it now. Lots to fix.

Hello again Mickey. Do you have the Heisler’s wiring schematic ? I can supply one in PDF format, as before with the power trucks. Could you provide a more “open” shot to get an idea what surrounds the bits you are showing and to give a better idea of scale. I have a Heisler (arrived 2nd hand but unmollested). I have recently had that converted to battery/RC operation, using an ESU DCC card for sound and speed control. Max

I’ll try to get some pics and post. But what I have discovered so far is that the PO did a pretty radical set of mods, which is not uncommon for some folks. He converted an oil burning bunker into a coal, removed all the factory wiring, removed the flickering coal box including cutting off the screw bosses, cut out the factory NMRA/Off/LargeScale switch and cut out the area to install a battery charge port, installed a battery pack in the bunker and one in engine behind the firebox door (removed the weight) cut wires to the cab lights, relocated the rear light from roof to bunker, epoxied a speaker box, and more. So I have a lot of restoring to do. I bought a shell as a part because it comes with the wiring harness (which is gone), and a replacement firebox for a Climax (since it is at lease available, to get started getting it “back”. But I have a lot of work. Had I realized all of this, I would never have bought it. But that is what it’s like when you have to buy without physical inspection, unless it is “like new”.

Turns out it IS a charge port and a second battery in the firebox.

Still looking for experienced Heisler folks. I’m slowly getting into it but for the life of me can’t get the boiler to come off. I’ve removed the trucks and found the front screw hidden under there. The cab seems to lift but seems to be catching on the Johnson bar. I see where it will unscrew on the floor but the linkage seems to be a problem. And even though I can see the front loose it just won’t come. The drawings are not of much help. I spent hours pouring over them.

Don’t know if this helps and maybe you have already looked here.
http://www.girr.org/girr/tips/tips9/heisler_tips.html

Yes I had seen that. Thanks. But unfortunately it doesn’t cover getting the boiler off.

Looking at the owners manual diagram exploded view I ask if you removed the two screws in the firebox side areas that are shown.

And in reading on the Johnson bar do you really need to take the boiler off since the Johnson bar functions according to Georges site?
I ask only as there is nothing in the boiler you would have to get to it seems.
The manuals link
https://www.manualslib.com/manual/911550/Bachmann-Spectrum.html?page=12#manual

Yes I already had those screws off. I did finally get it off. Yes you do have to take the Johnson bar apart to get the boiler/cab off. It’s a lot of little area that have to be taken off but at least I’m there, finally. The reason I am replacing it with a new one I bought as a part from Bachmann which included the wiring harness, the flicker board and the main board. The PO had done a lot of mods including cutting up parts of the boiler front and rear so in order to get it back, it’s the best option. Wish I could have found a good new one but somehow I missed the reasonable one on eBay back in Sept

Just wanted to say, glad you are tearing into the engine and it will be a good learning experience, I to have Rail Pro in my engines and I do love the system. Like someone posted I try to find exploded drawings of the engines that I redue/rebuild mainly to find where the hidden screw are for removal of parts. You will also find adding LED lights will make the model so much more realistic and it’s just pretty much plug and play with Rail Pro as your power source. Being a modeler first and a runner second for me it’s the best part of the hobby.
trainman