I have been off the train forums for a while mainly due to mainly work and car projects (I may post if interest). I have been very slowly been getting back into the railroading groove, mostly by buying new Locomotives and Rolling Stock with no-where to run them :).

Some of you may remember some photos of the ‘old’ layout, most of trackwork and switches were hand spiked on wooden ties. 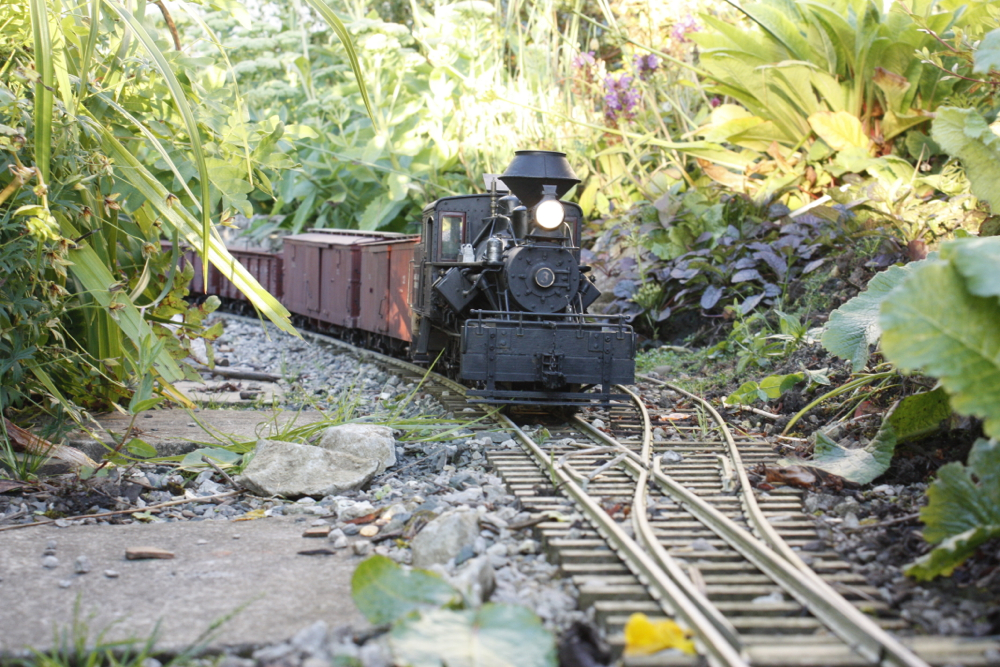 The outdoors took its toll and some garden landscaping meant track had to be lifted. I found that while the wooden ties looked fantastic, they were not really suitable for our British wet climate. Once the track got lifted, it basically disintegrated :(. I made the decision to rebuild with commercially made track and switches and do the expansion I always wanted.

Fast forward to 2017, the basic groundworks are mostly done. I need to order up another bulk bag of ballast before I can start re-laying the track. I could not resist placing the track, just to see how it will look: 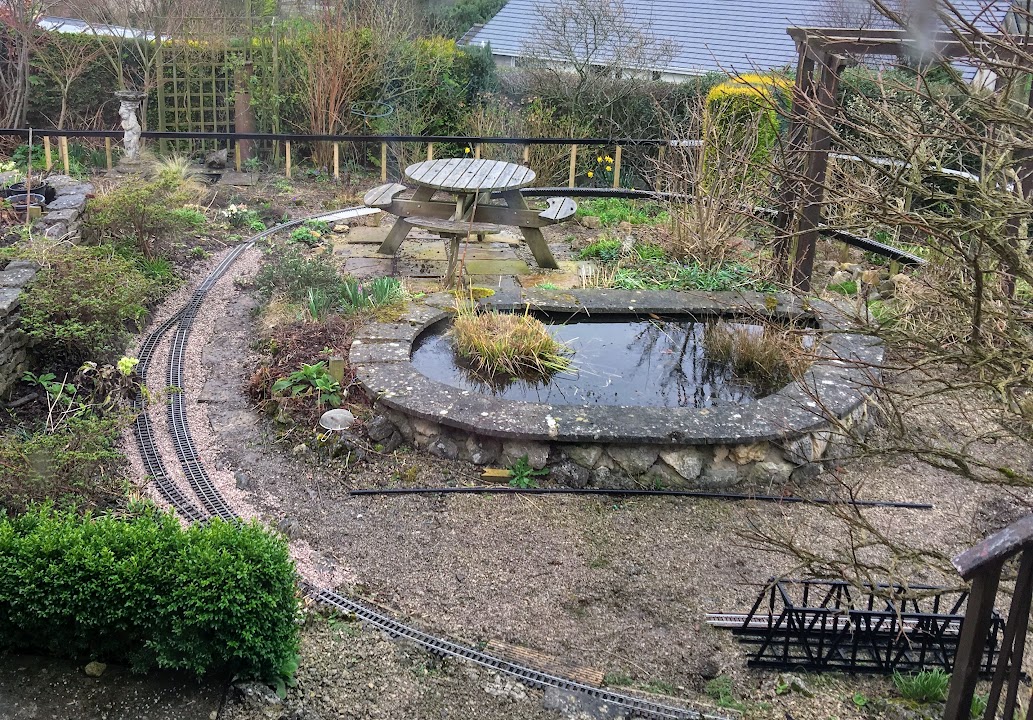 This is the main circle of track, off the photo is sidings and dual gauge interchange, the raised track along back is the expansion to top of garden 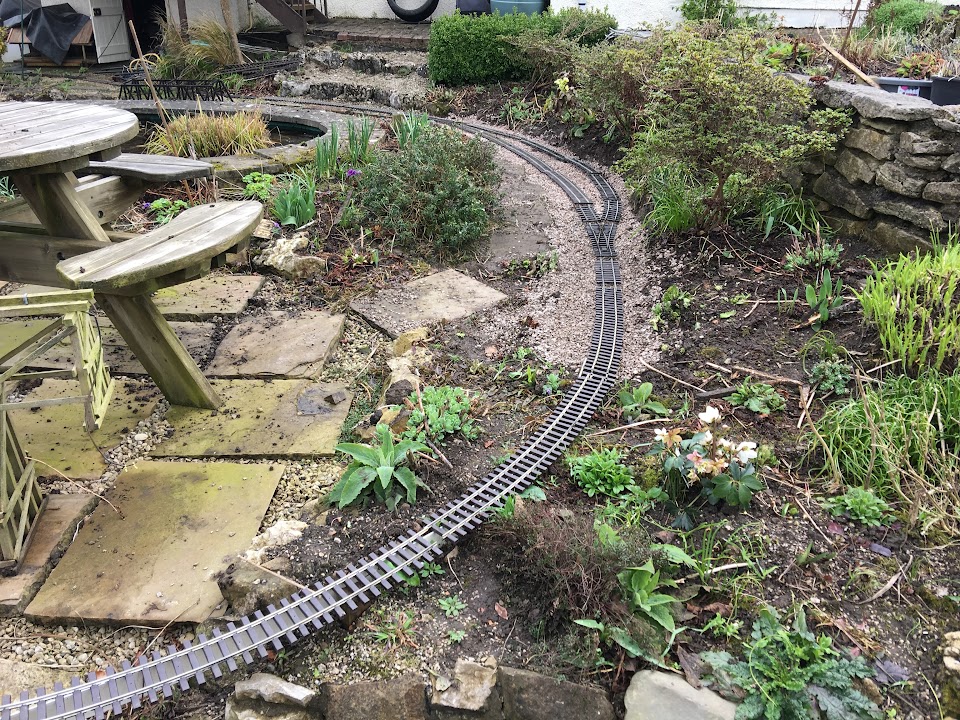 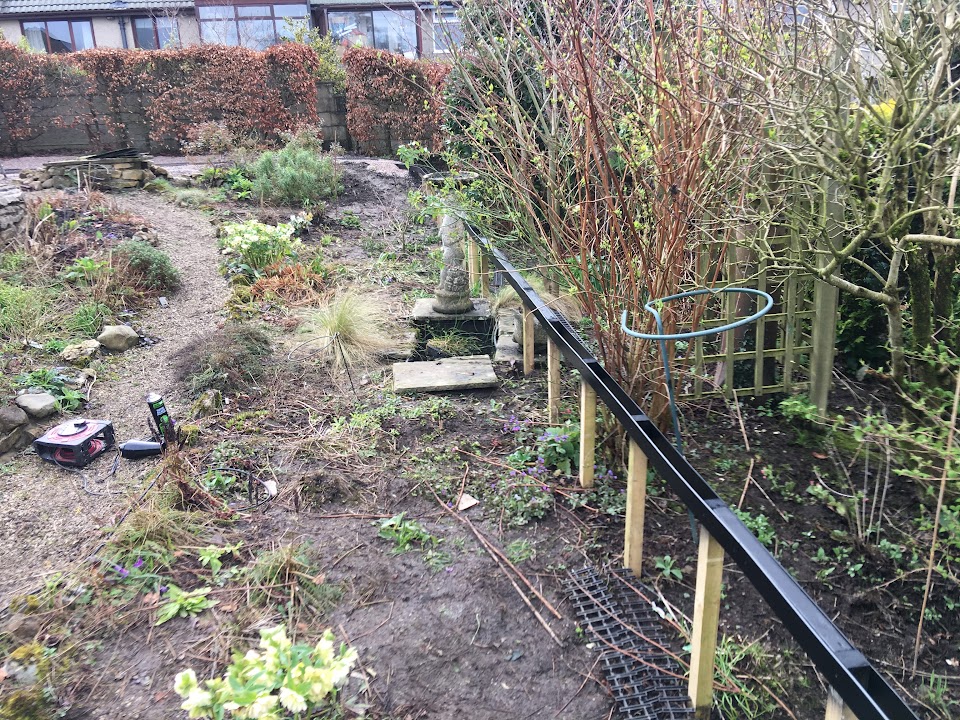 Top of garden with new terminus, undecided on layout of track. White trim has now been painted 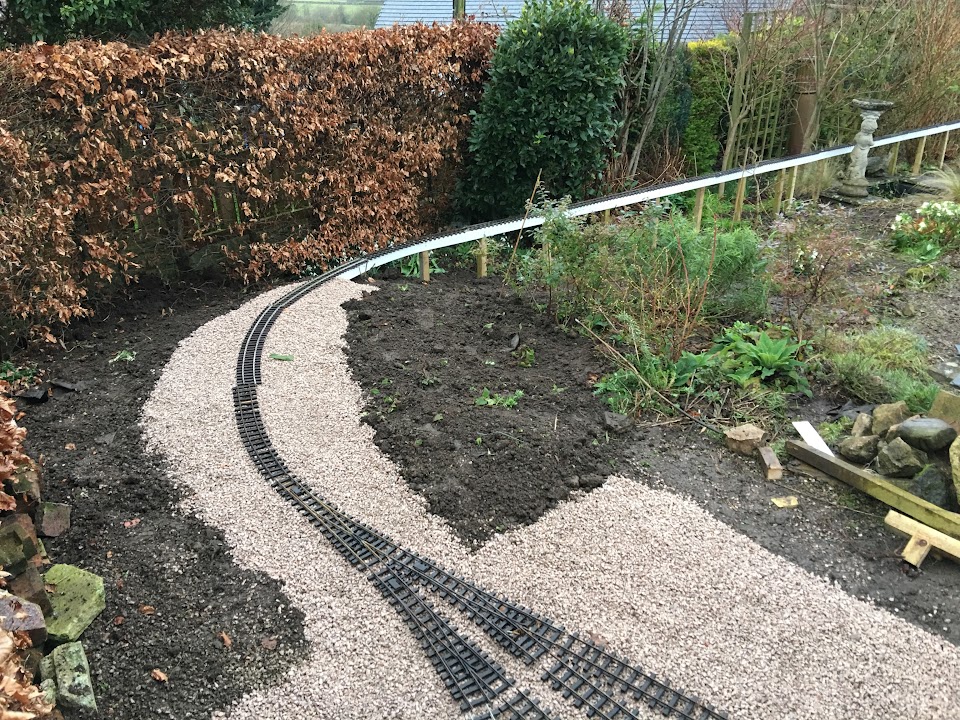 … I found that while the wooden ties looked fantastic, they were not really suitable for our British wet climate.

Can understand that, one doesn’t see much moss on the flagstones under the picnic table here in Missouri since a lot of our summers can be quite dry for stretches. I guess that’s one thing making garden railways a different breed of beast from other model railroads, that need to deal with being outdoors all day every season.

Here is the (very rough!) track plan I am working to, though things can change due to practicalities of the garden. 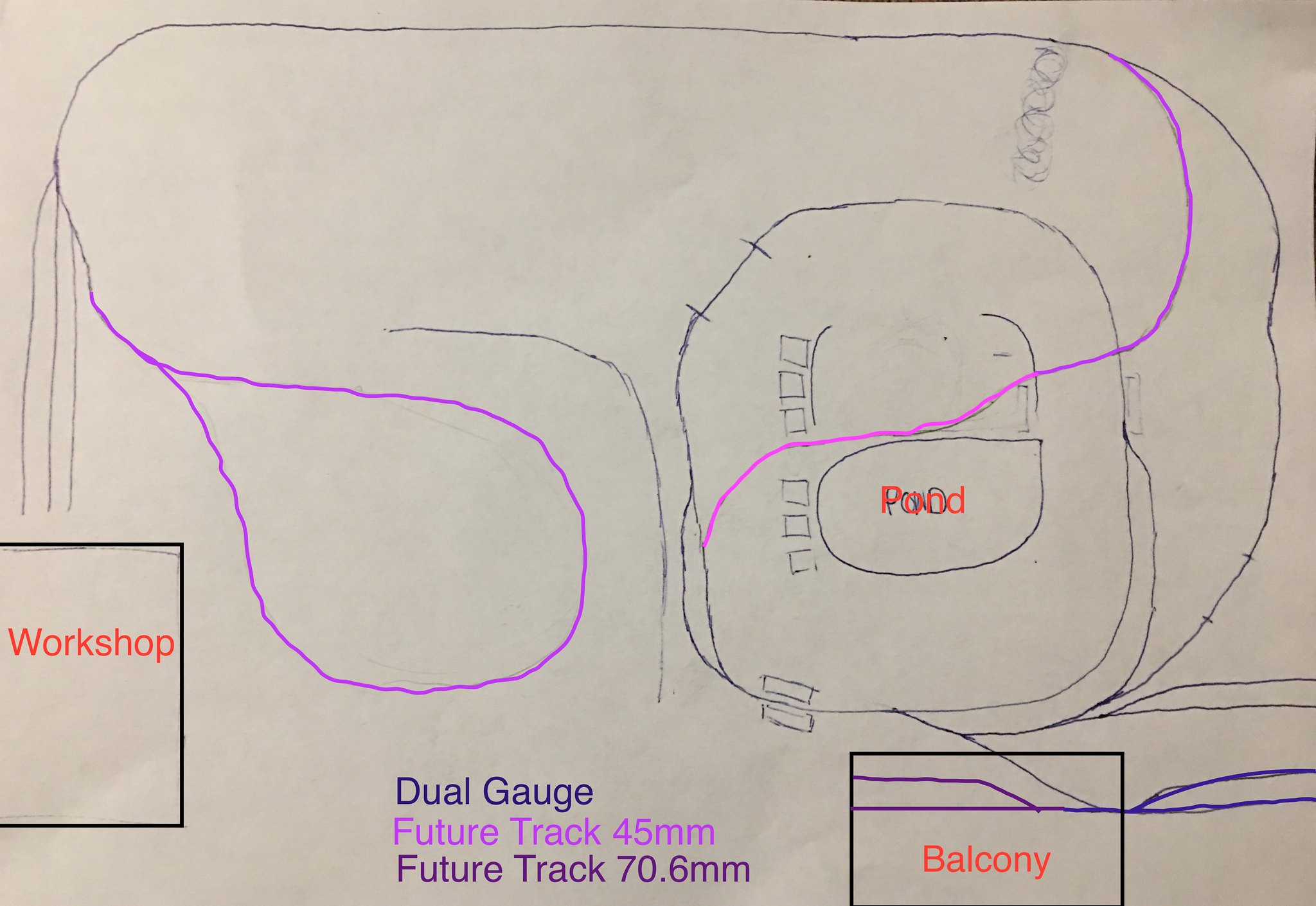 Existing/new track is black, 1/2 of the dual gauge is in. The violet lines represent what I need to add to make it have a reverse loop at each end.

View from underneath balcony: 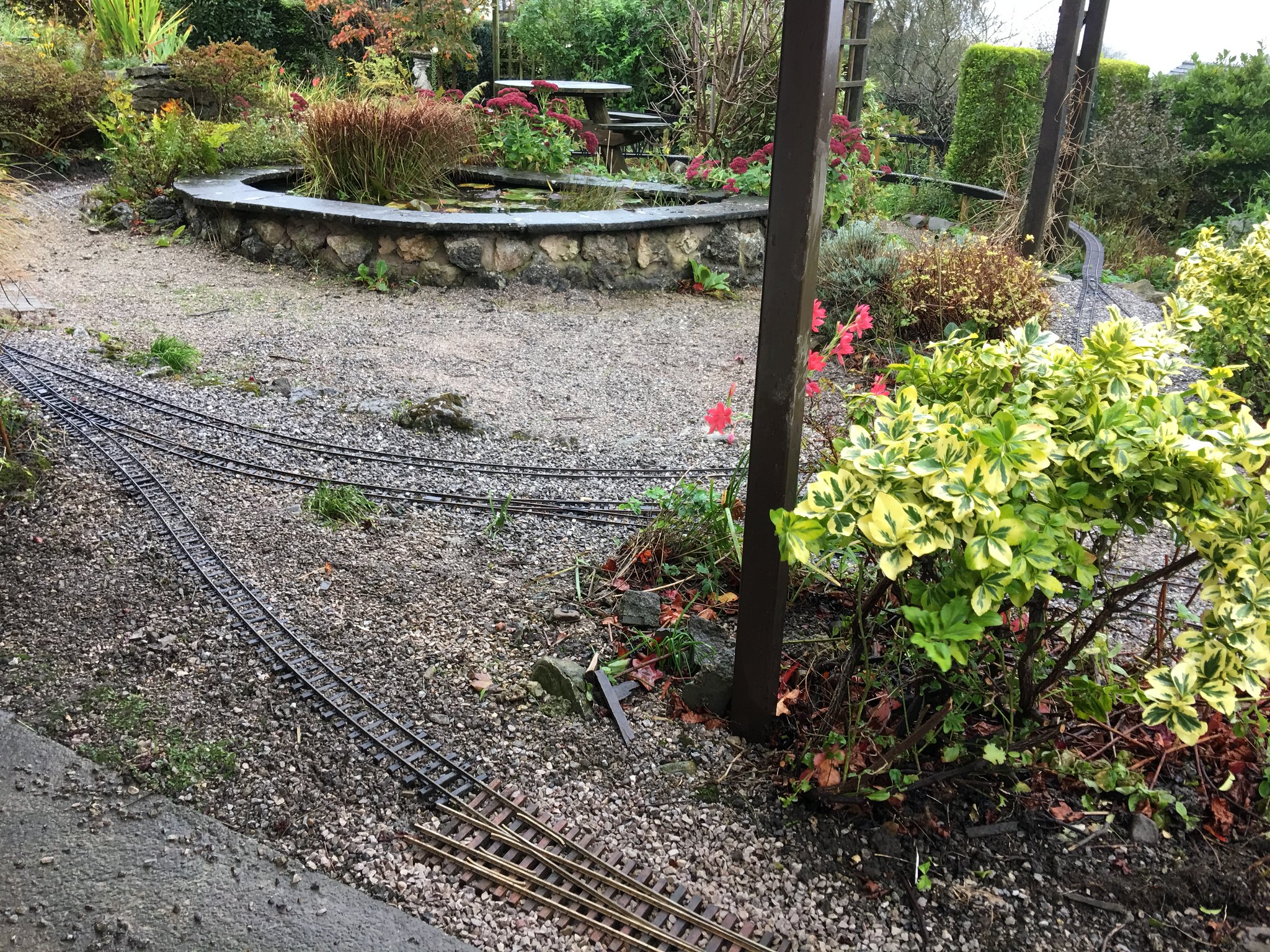 Where the standard gauge line connects: 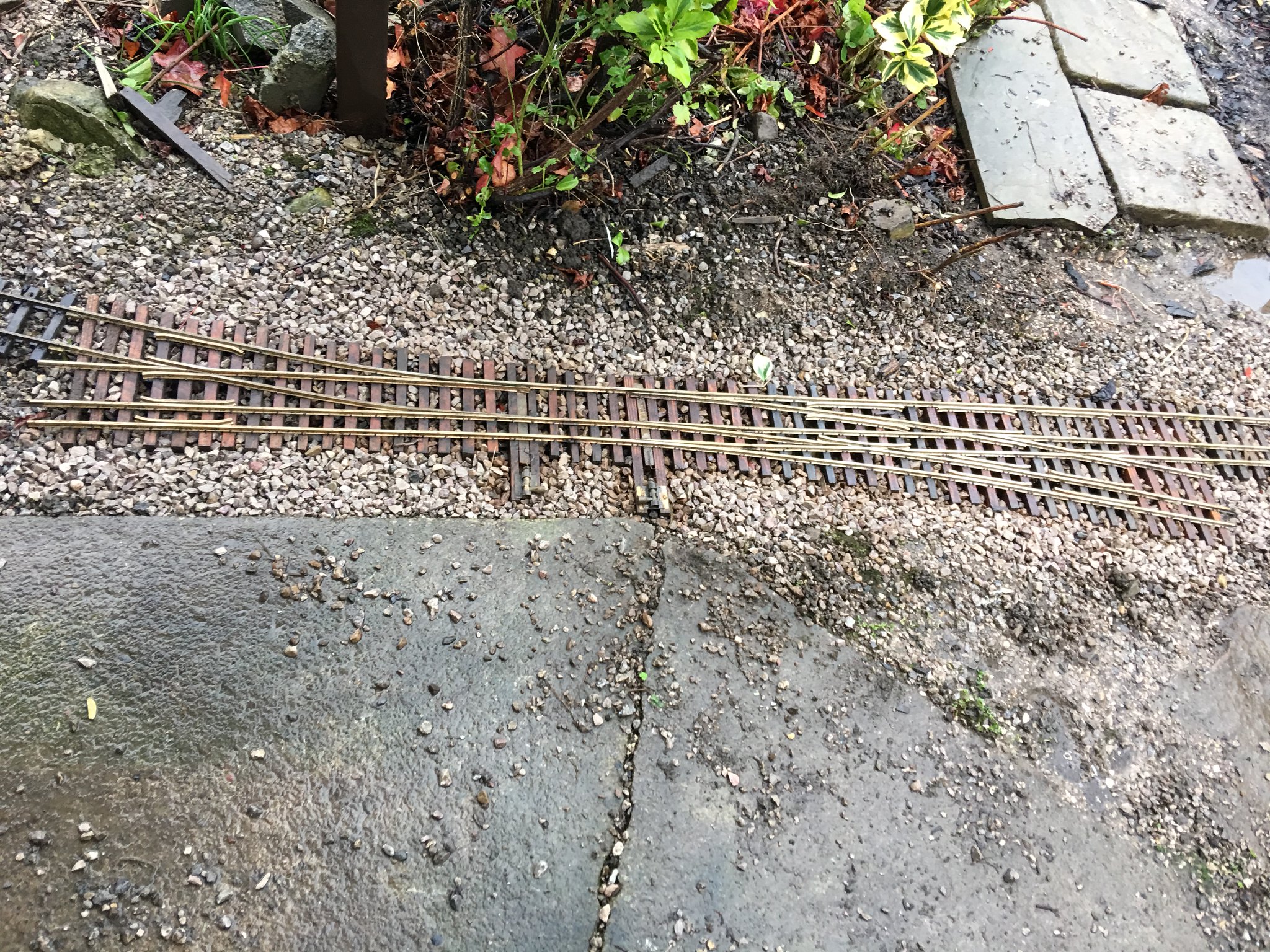 Logging camp, buildings were built by a very good friend: 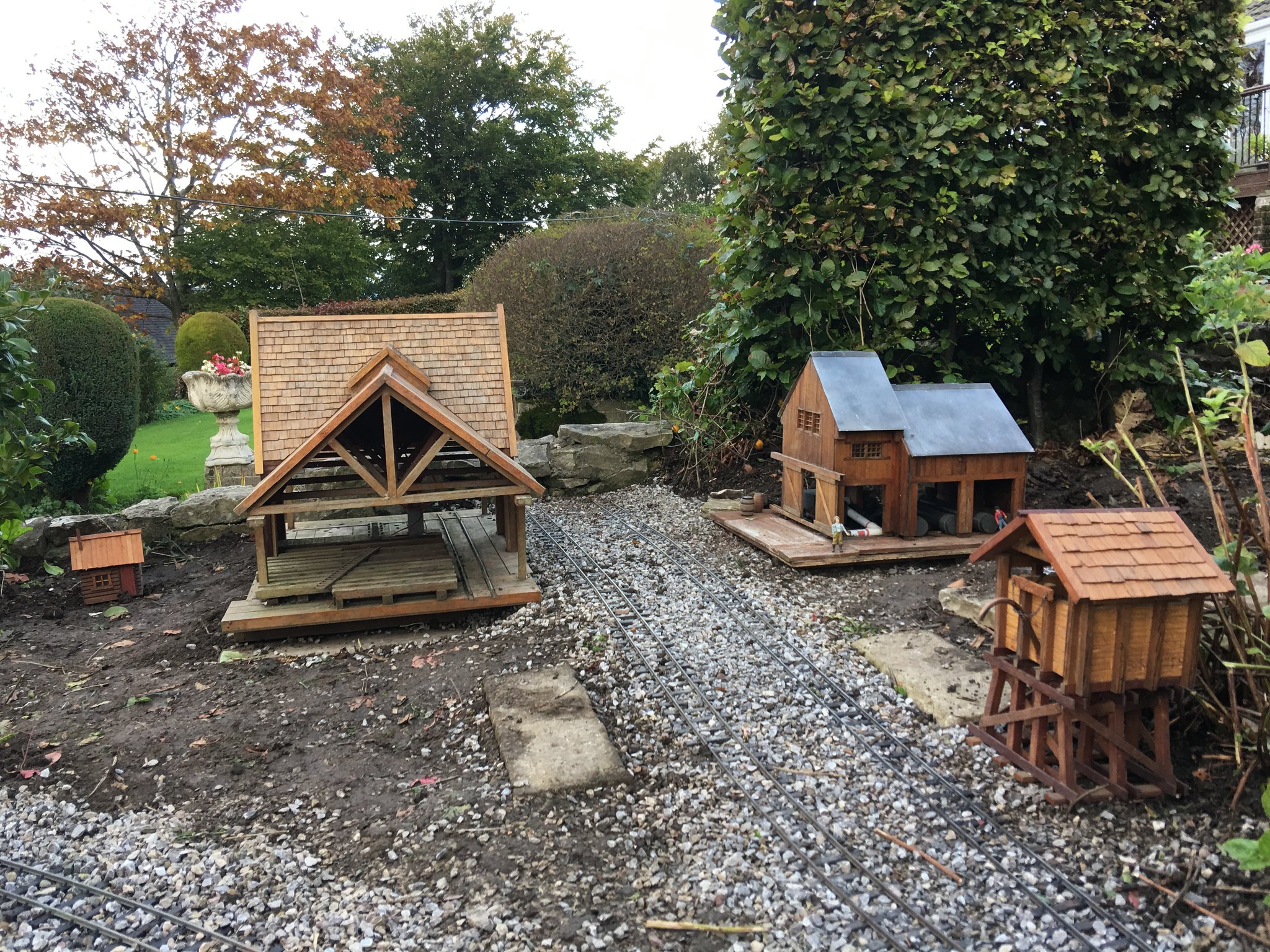 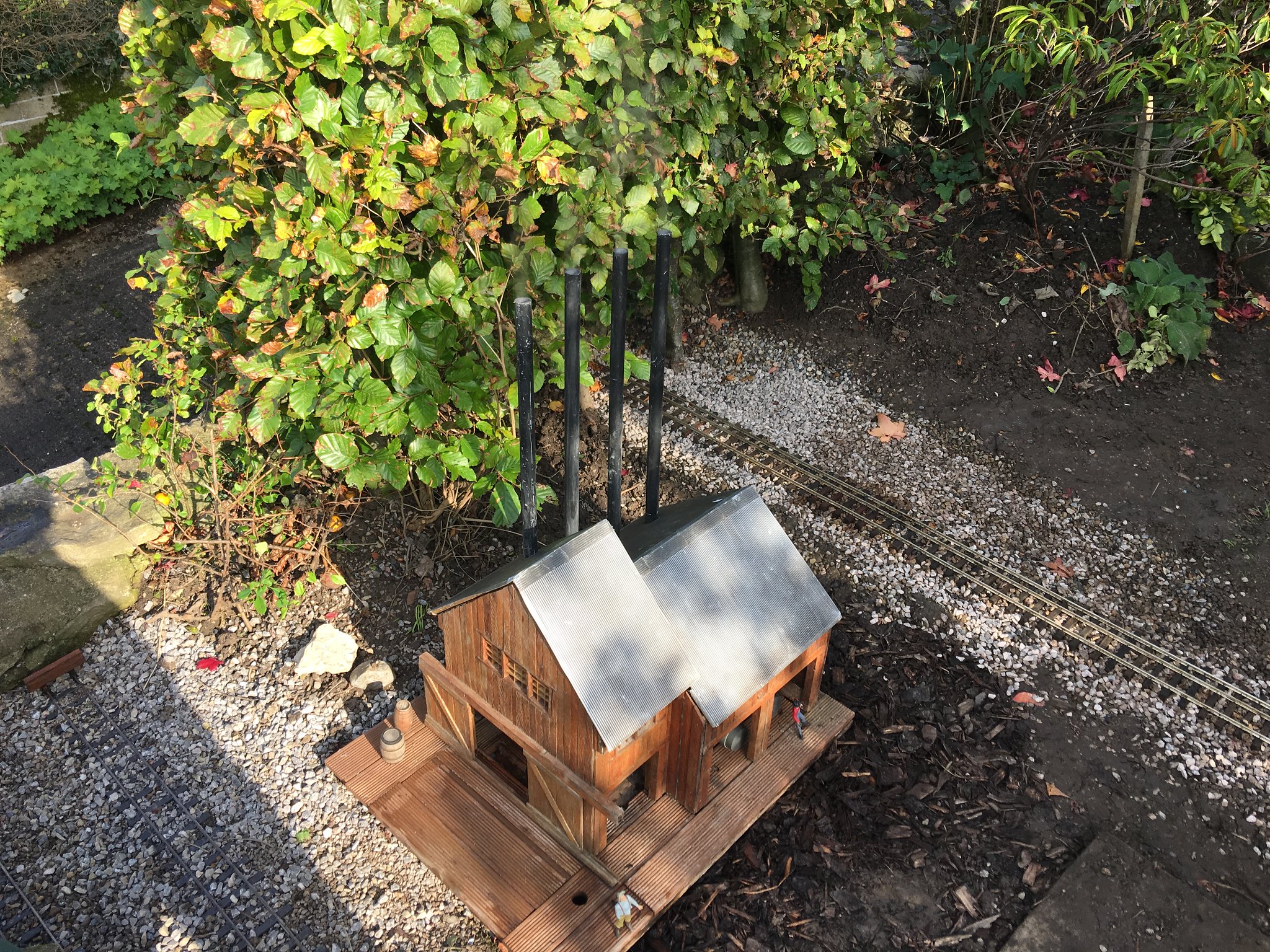 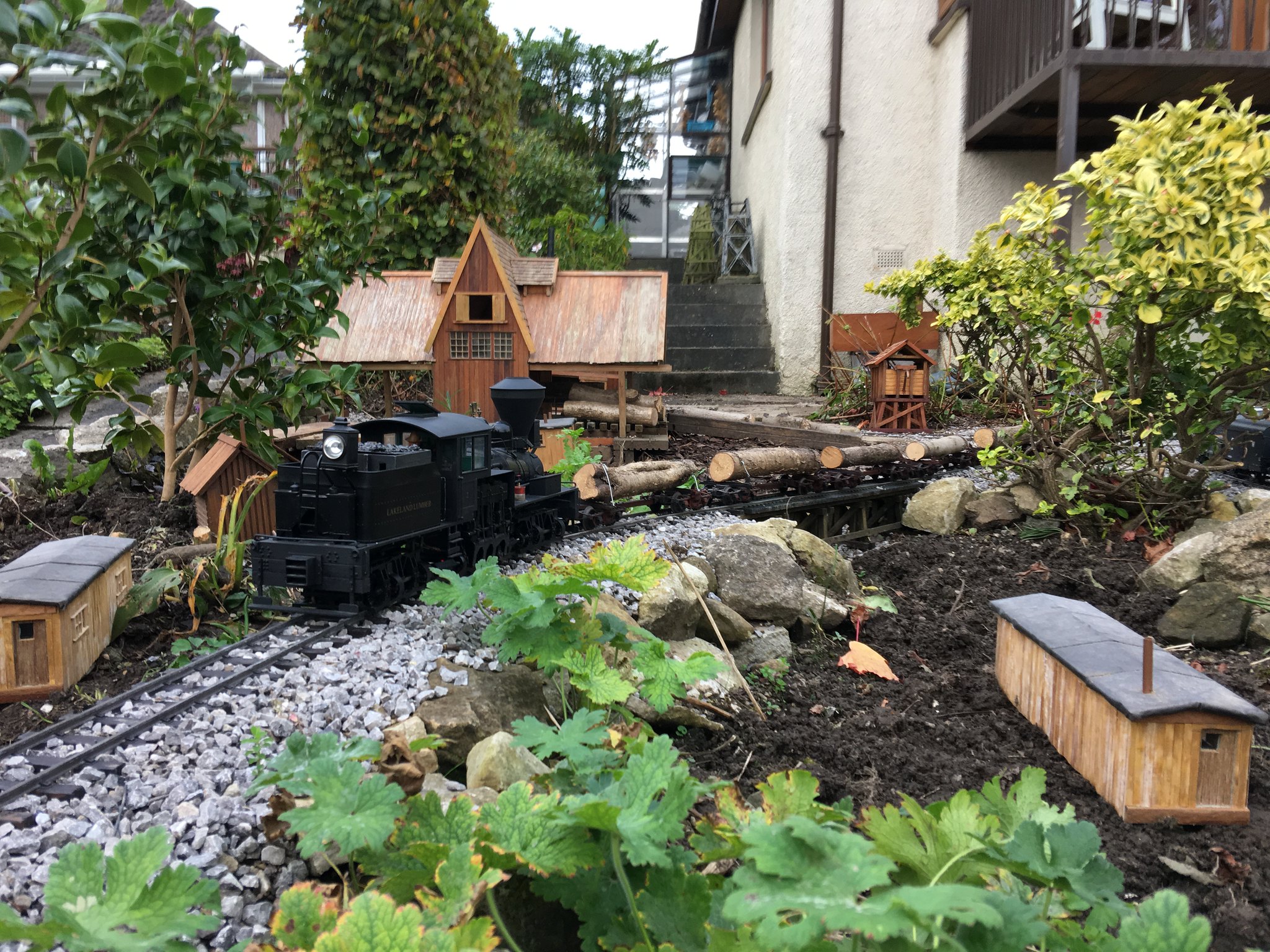 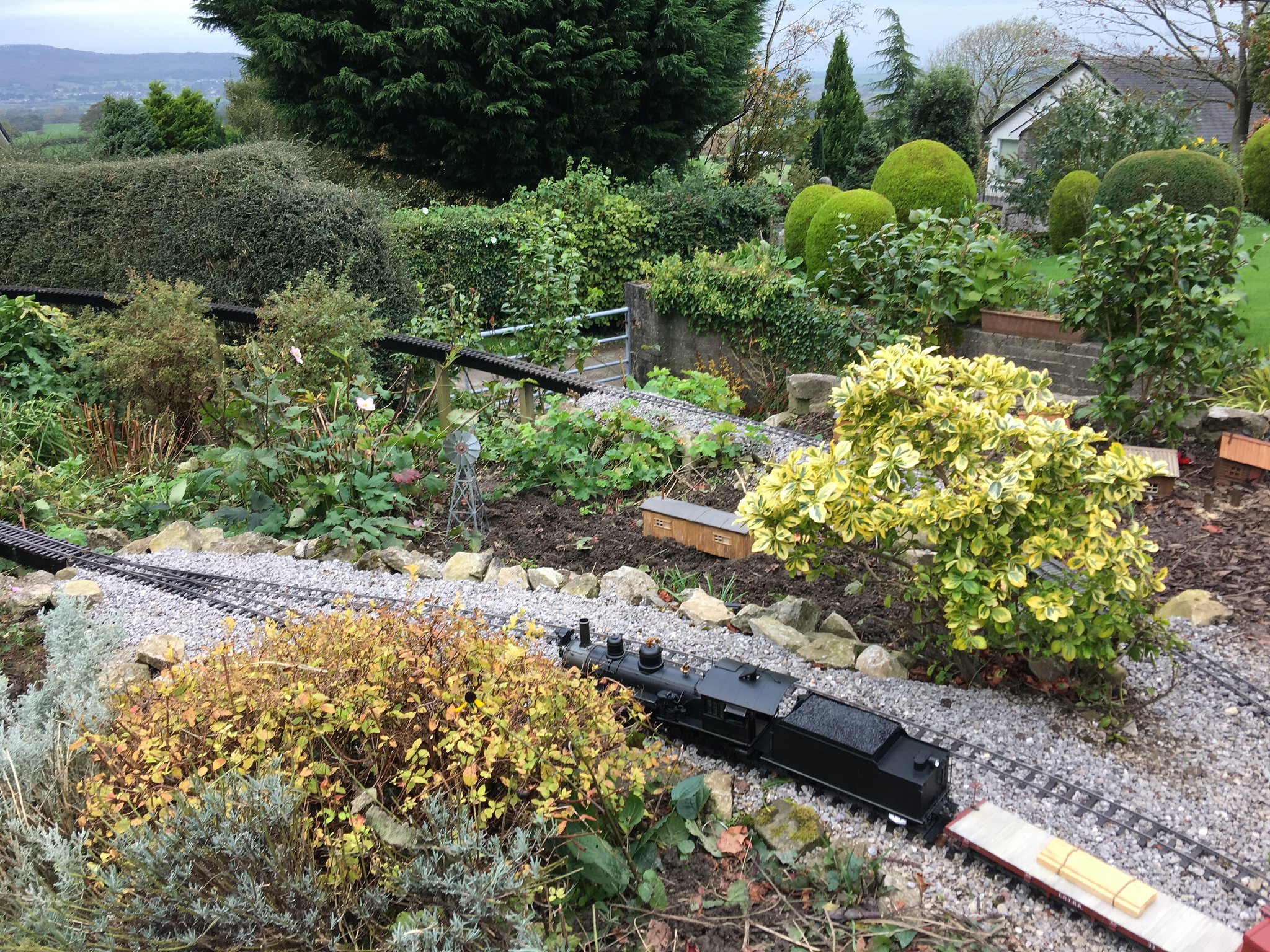 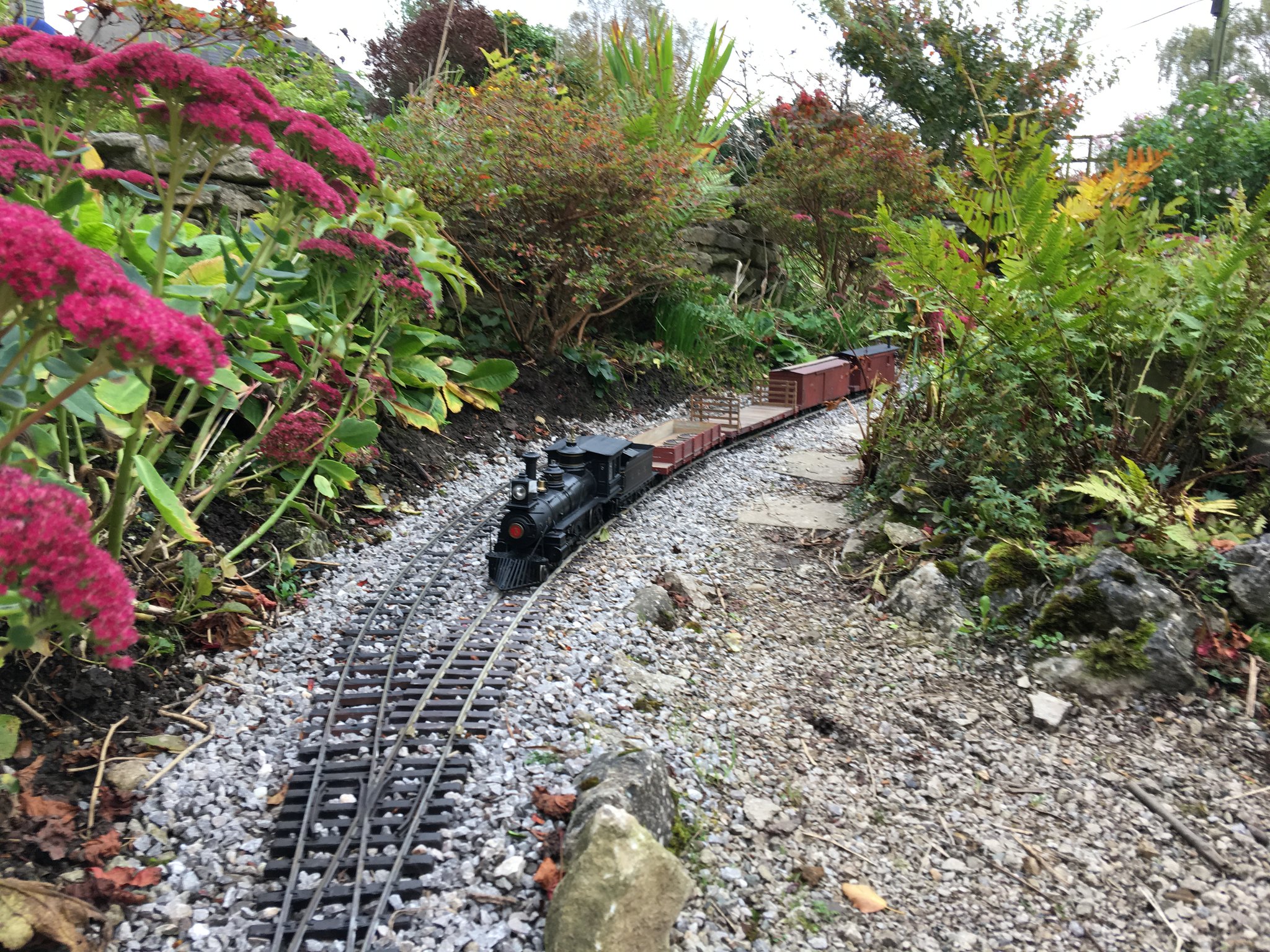 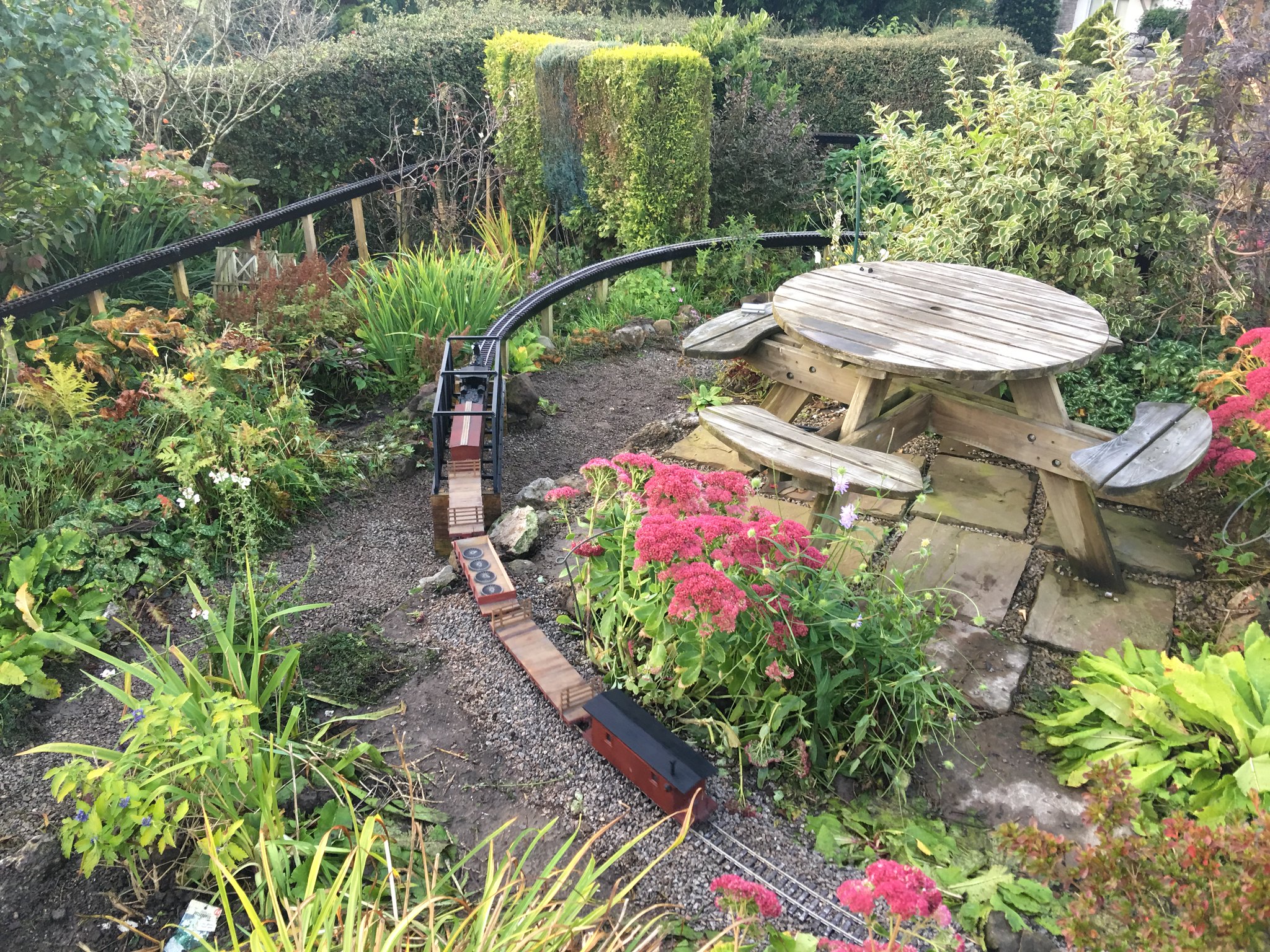 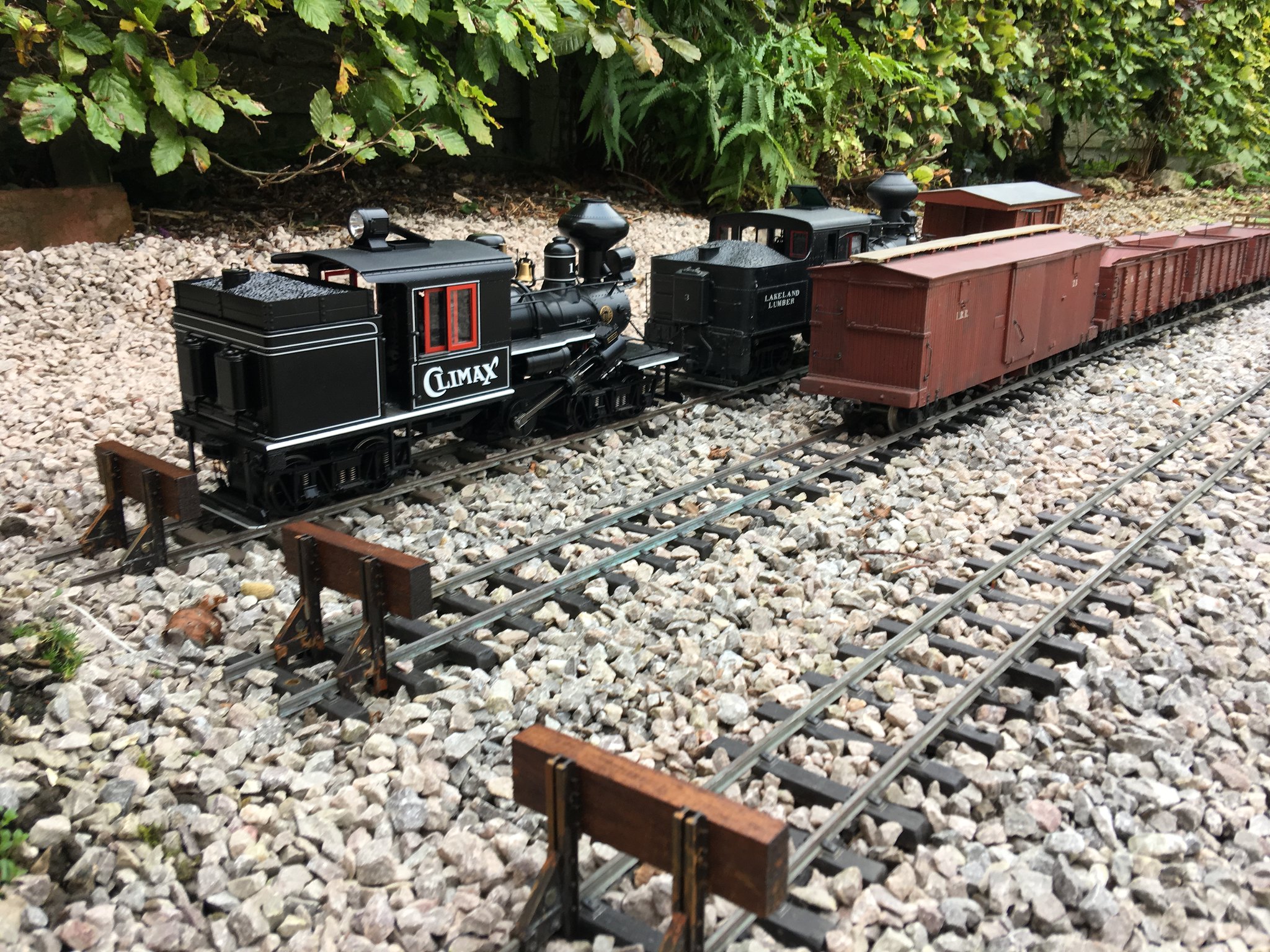 For now, this is where the trains must stop at the top of the garden, reverse loop required.

Here is a video showing the smoke effect and sound module for the sawmill: