I never got to my B’mann 10-wheel this weekend. Instead, I took Oldest Daughter (O.D.) to Ka’eana Point in pursuit of natural, ancient, and modern history. This is the westernmost tip of O’ahu, where the Oahu Railway & Land Co. (OR&L) made a hairpin turn to connect the north shore plantations with the rest of the island. It was the path of mikados pulling unit sugar trains, specials pulling the elite to a weekend getaway at the OR&L’s Hale’iwa Hotel, as well as rail-sponsored fishing and photography trips. American engineers and Japanese laborers dug, blasted, and bridged a path around the rugged coastline to make it possible. The Hawaiians who came before, however, had established that the point was, in fact, a portal to the next world, and that their ancestors walked the same coast to join those in the great beyond. Now, the whole is a preserved and protected dune-scape, slowly, slowly moving backward to the time before man. Here is our journal in a landscape where the technological, the metaphysical, and the natural worlds collide. Enjoy!

We parked at the end of the paved round on O’ahu’s North Shore. This is a few miles beyond Dillingham Airfield, where, on 7 December 1941, the US Army Air Force would rise in futile opposition to the Imperial Japanese Navy. The track is accessible with 4x4 vehicles, which my car is decidedly not, so we disembarked and headed west on foot.

To the left rise the Waianae Range… 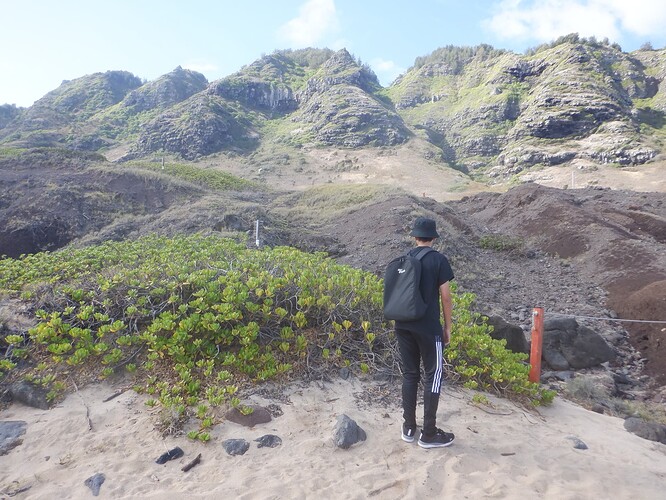 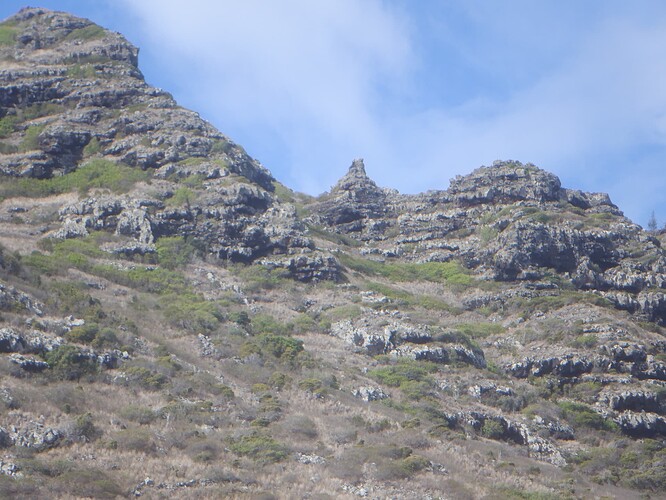 DSCF78641920×1440 279 KB
…one of two ranges that divide O’ahu. The other, the Ko’olau, separate our home from Honolulu. The OR&L never made it that far, though the eponymous Ko’olau Railway tried. Ever present to our right, the broad expanse of the Pacific, which would have greeted passengers and crew alike on the trains of yesteryear.

DSCF78631920×363 59.5 KB
If you can imagine riding one of the chartered fishing or photography specials, you can see the appeal of the numerous hidden inlets and rock formations that offer both angling and artistic opportunities!

But, of course, we were looking for evidence that those trains ever ran at all. Amidst the dunes and scrub, you can catch glimpses of the right of way, but what really gives evidence of the art of the engineer are surving bridge abutments. 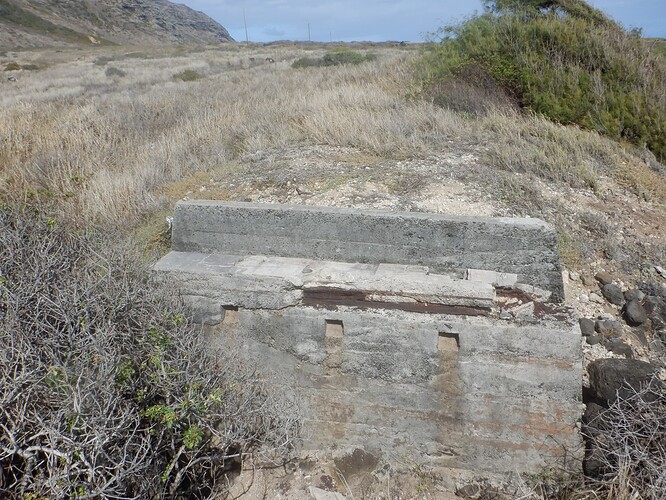 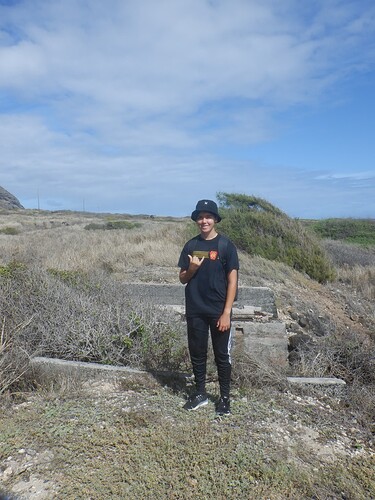 DSCF78651920×2560 584 KB
What we found most intriguing about these surviving structures was the combination of construction techniques. Note how the example below uses reinforced concrete, mortar and lava stone, and free masonry. The Hawaiians used that latter technique to build heiau (temple) that have stood for centuries. 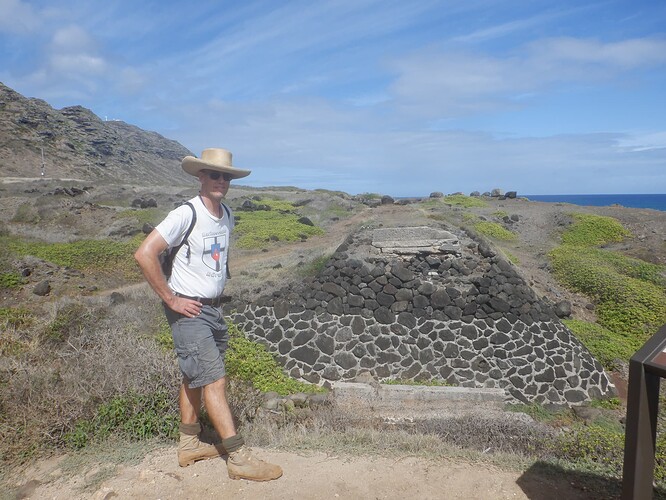 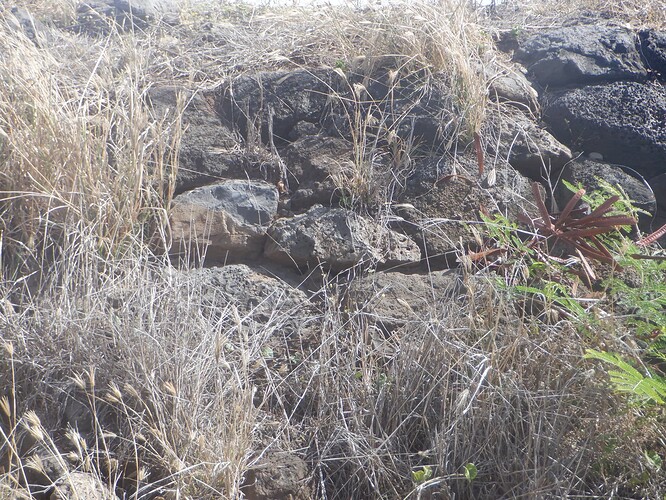 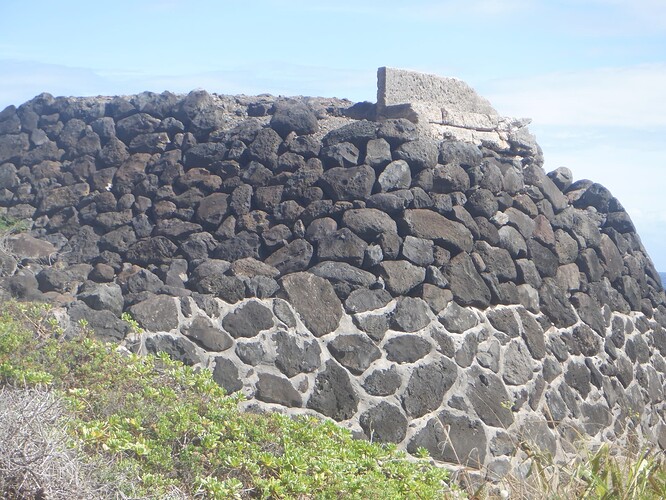 DSCF78711920×1440 386 KB
I found this blending of industrial age and neolithic techniques fascinating! In one location, the stones stood where the concrete has fallen, and I wondered what future archaeologists will make of the remains. Will they attribute them to an earlier era, or recognize them as the last remnants of an age of steam and steel?

O.D pointed out that the stone and mortar also matched nicely the bridge abutments she made for us almost seven years ago using her imagination and materials on hand. There is a prototype for everything…even after the fact!

We weaved between the crumbling right of way… 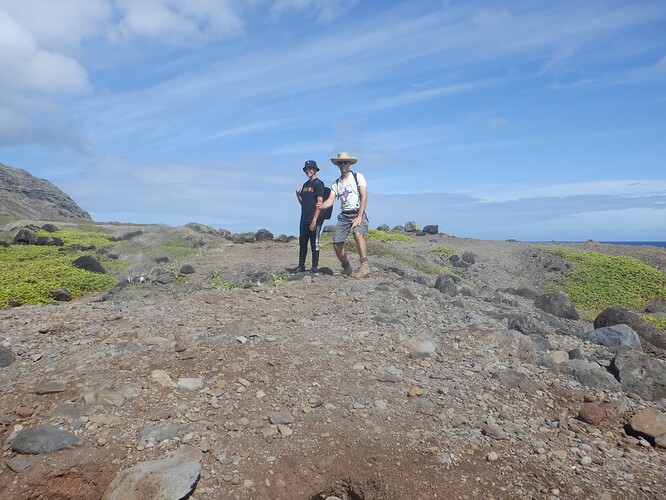 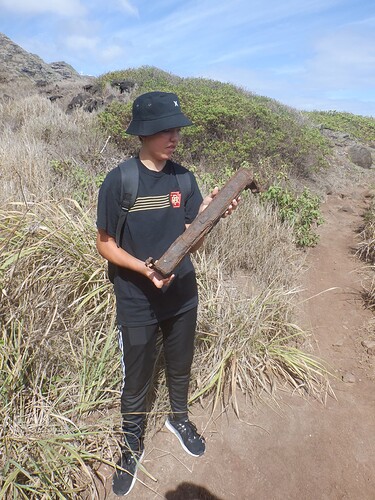 DSCF78701920×2560 754 KB
…which we left for others to ponder. What follows are some of the more intriguing natural features we explored, which, if you could ride our imaginary train, would have been there for you to enjoy as well. I’ll post them without commentary and let you enjoy the ride for the moment. 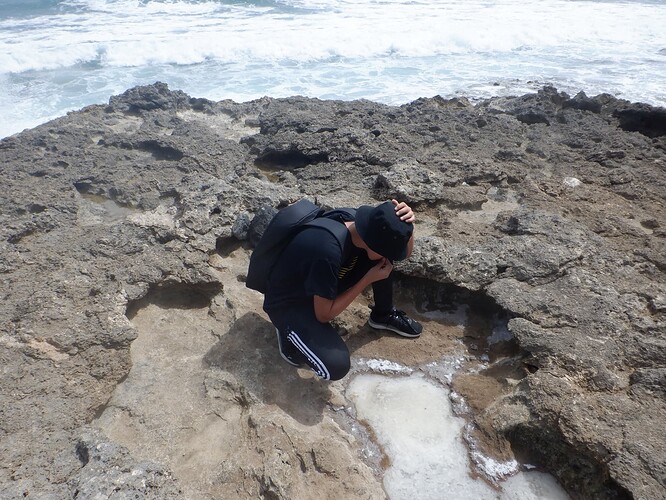 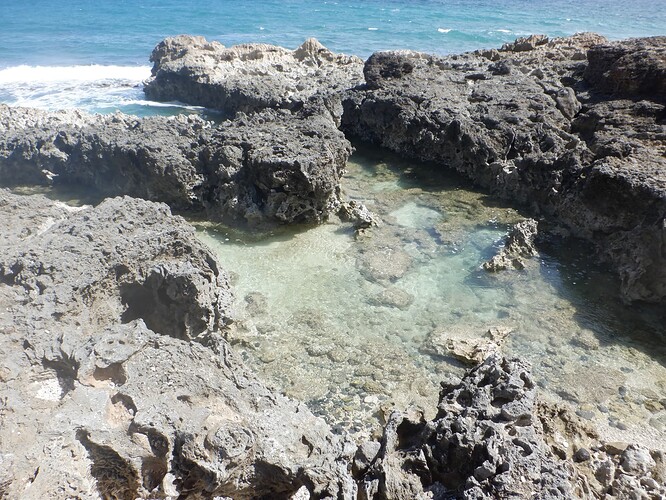 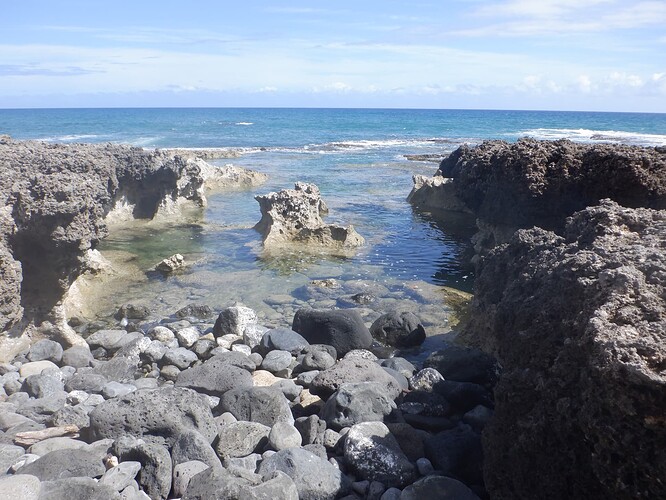 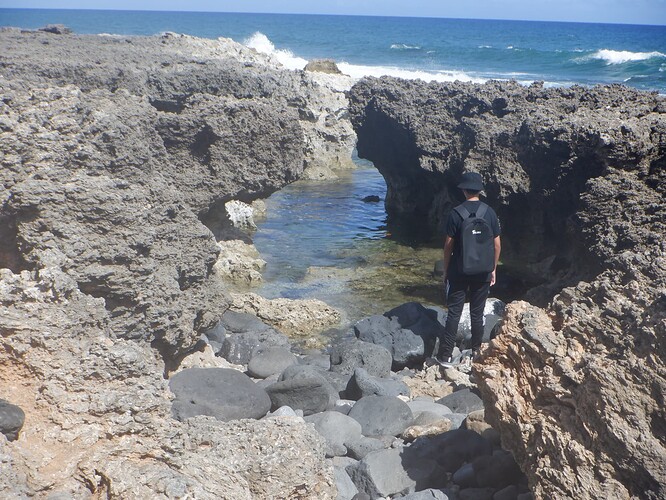 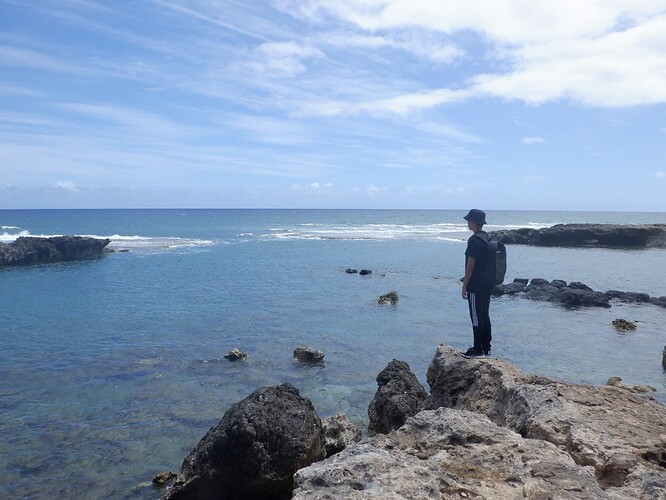 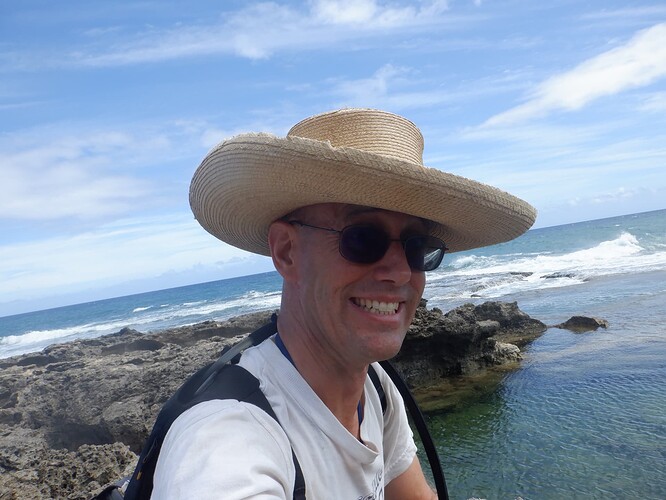 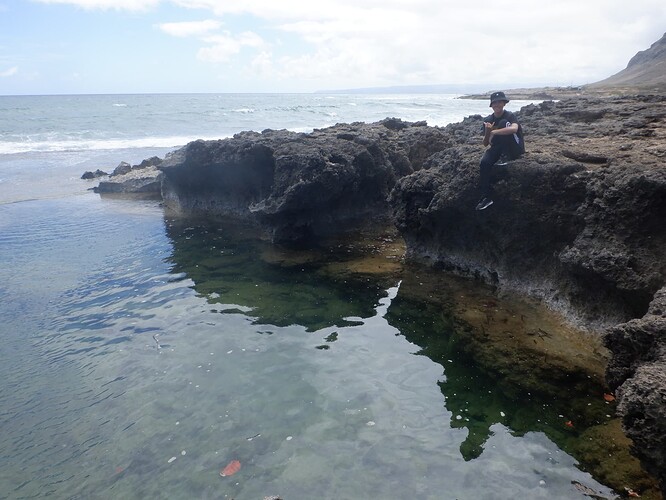 Some years ago, the state erected predator barrier to give our remaining ground nesting birds some chance of surviving. 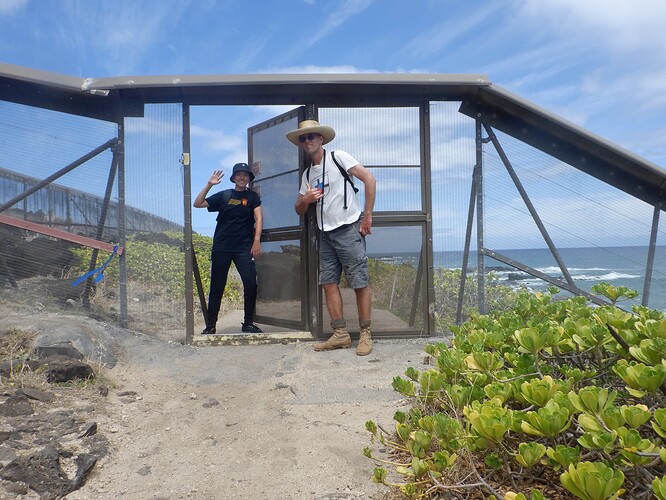 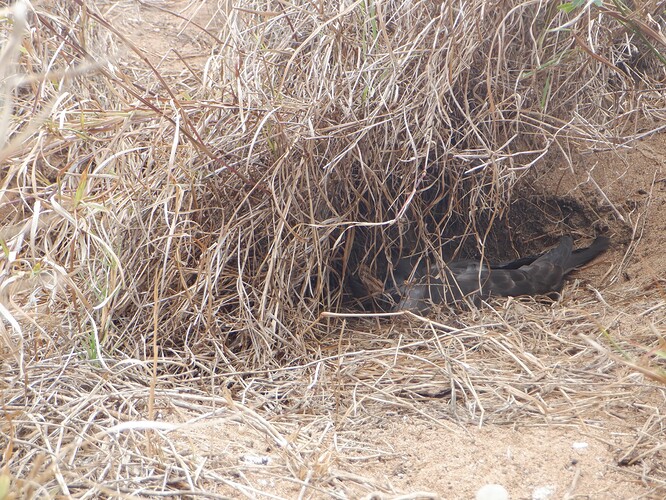 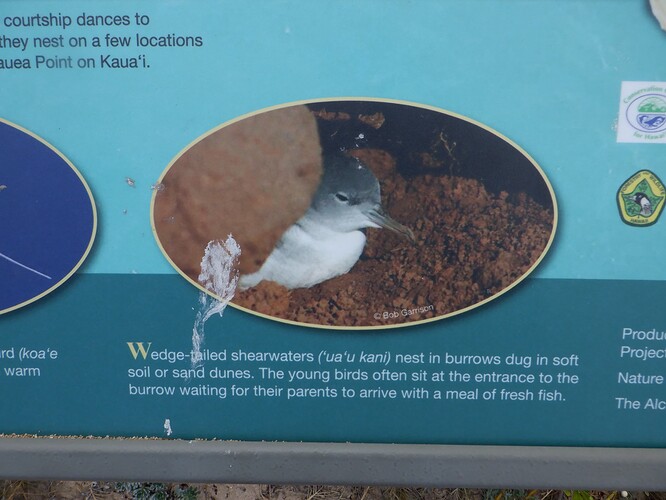 The photos did not come out well. Thank goodness for the information placard! I should note that the placards also document the OR&L as well.

The OR&L’s hairpin turn is inside of this barrier. I was shocked at just how narrow the cut is! 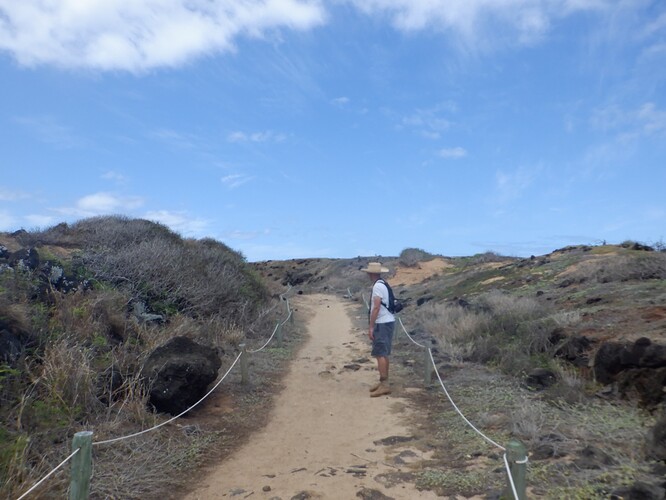 For the record, when I first came to this place 20+ years ago, I had no idea that a railroad ever existed here, and I attributed this to an abandoned road.

Our imaginary train, having rounded the curve, would then proceed eastward along the coast to its terminus in Iwilei just outside of Honolulu.

We, however, disembarked in pursuit of the “leaping point.” The location is marked by the island itself, which descends like a pre-dreadnought battleship bow from the heavens… 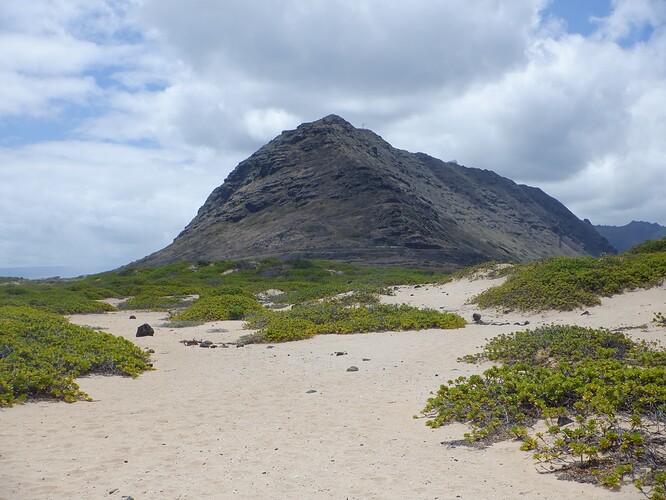 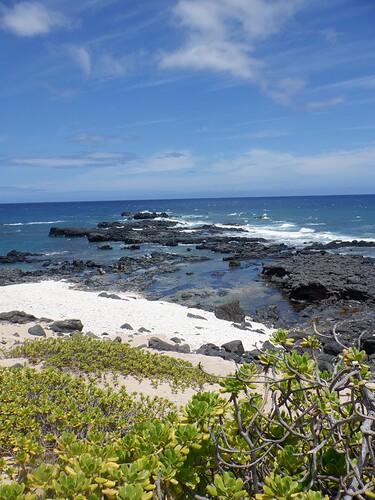 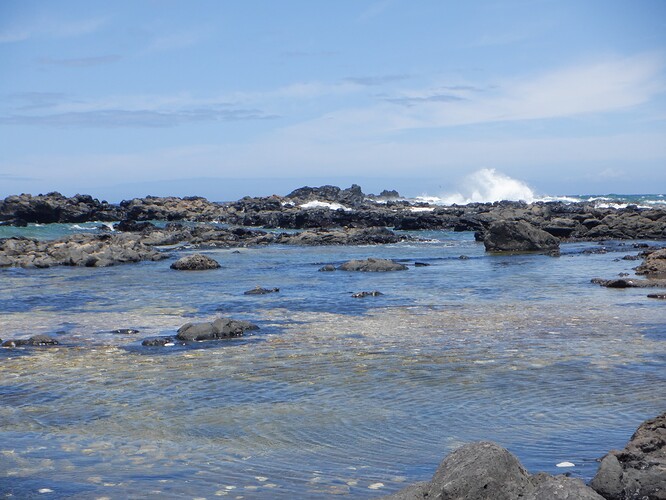 …and to try to take in the scope of the place.

Once, years ago, I proceeded out along those rocks to symbolically cast off a concluded portion of my life, but neither she nor I found similar need to follow that path today. Out of respect for the place, we halted our journey at that little beach and enjoyed the moment. We will all book a one way ticket to ka leaina a ka uhane in time. Today was not our day, so, picking up the old roadbed, we hitched a ride on a ghost train of empties and headed home.

I know my snapshots are not the best, but I hope they gave some insight into railroading in the middle of the Pacific!

Have a Great Week!

Eric, Thank you for the beautiful history lesson.

Thanks Eric. What a neat story, and great photos. Looks like both you and OD had a fine adventure!

Thanks for taking us along on your journey with OD, Eric. Great photos and commentary.

Beautiful pictures and if I am correct OD has drastically sheared her long hair, or it’s all tucked under her hat. Either way looks like a fun day to explore with 1 of the kids, some fun 1 on 1 time. Thanks for the trip and the beautiful pictures

picking up the old roadbed, we hitched a ride on a ghost train of empties and headed home.

Really nice. You surely have a flair for words, Eric.

You might consider writing a booklet on all this, self-publish it, and offer it in local shops.

Thanks everyone for your kind words! It is my way of giving back a bit for all I’ve learned about the prototypes from these pages! Also, it is a way of sharing an oft overlooked part of O’ahu that so clearly shows the fascinationg interplay of cultures, technology, and the natural world that drove me to “drop anchor” here permanently. Oh, and yes, @Pete_Lassen , O.D. cut her hair a year back to donate it. She has yet to grow it back

, having discovered it is much, much easier to care for this way! As CINCHOUSE reminded me, though, styles and fashions change and hair grows back!