On 2/14/20 The East Broad Top announced the purchase of the railroad by the East Broad Top Foundation. During the announcement ceremony, Dr. Lee Rainey spoke and told a story that came from common carrier era brakeman Steve Painter. Steve had been assigned to head end brake the brand new locomotive #16, the largest and most powerful 3ft gauge engine Baldwin had built to date (1916). When arriving in Mt. Union they asked at the yard office for return trip orders. The agent told them to bring “all the empties you can haul” up the mountain as the mines were low on empties. They gathered every empty hopper in Mt. Union, 60 of them, and headed South to “see what this puppy can do”. They were slowed to nearly a crawl at McMullin’s Summit, but got the train into Orbisonia; the trip becoming an EBT legend.

A few days ago I received two more Bachmann 2 Bay hoppers from Pete Thornton which brings my total of steel hoppers to 7. Could C.V.S.Ry. C-19 #8 handle 7 cars plus a caboose up the ‘mountain’ - my curving 4.5% grade? A train was built, fuel loaded and #8 departed West Willow Hill in the basement for Pine Summit - the highest point on the line. To see what this puppy can do! #8 handled the load with ease; turned on the wye, and staged at Walk Trans-Load while waiting for clearance to return West where I grabbed this shot… 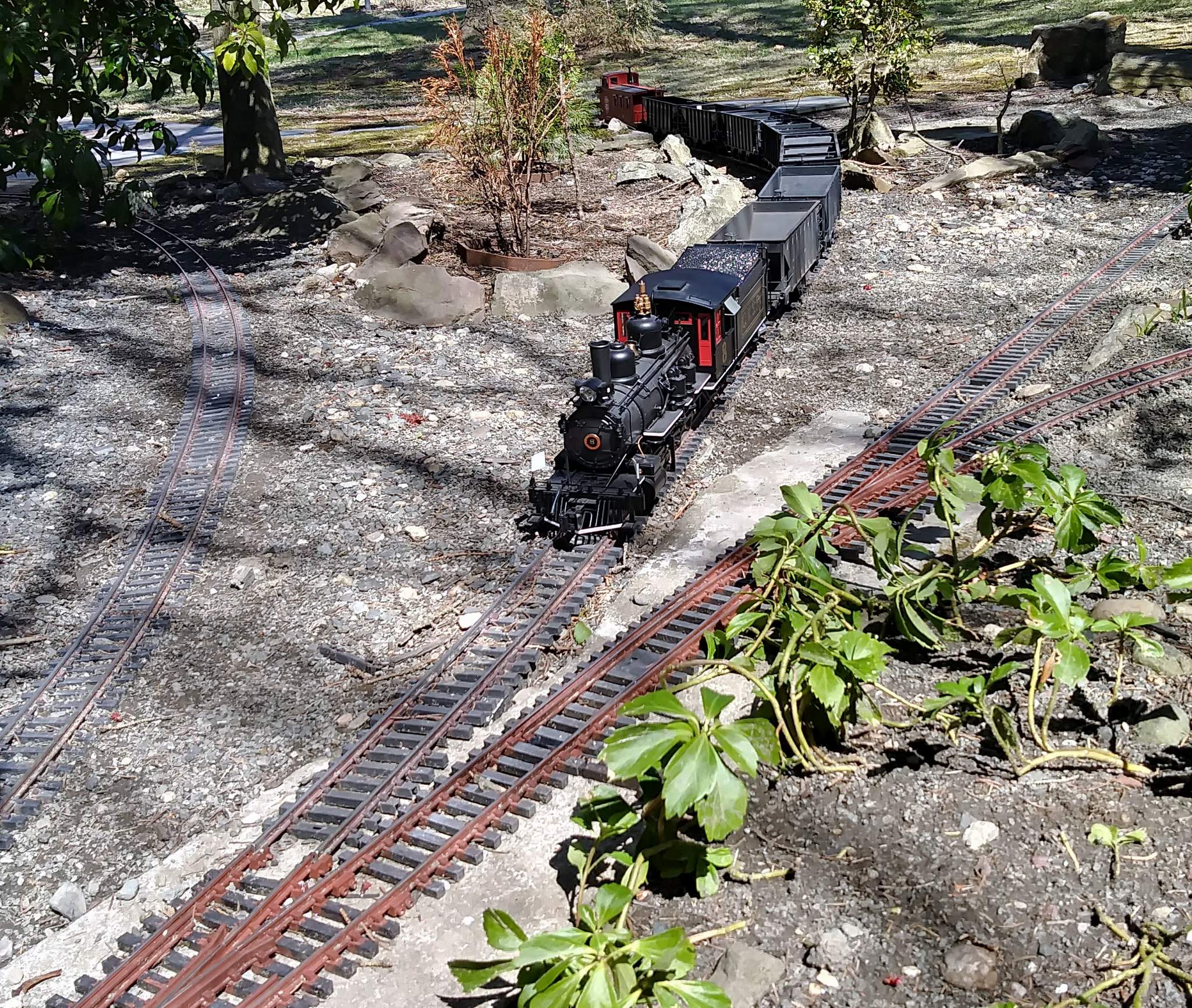 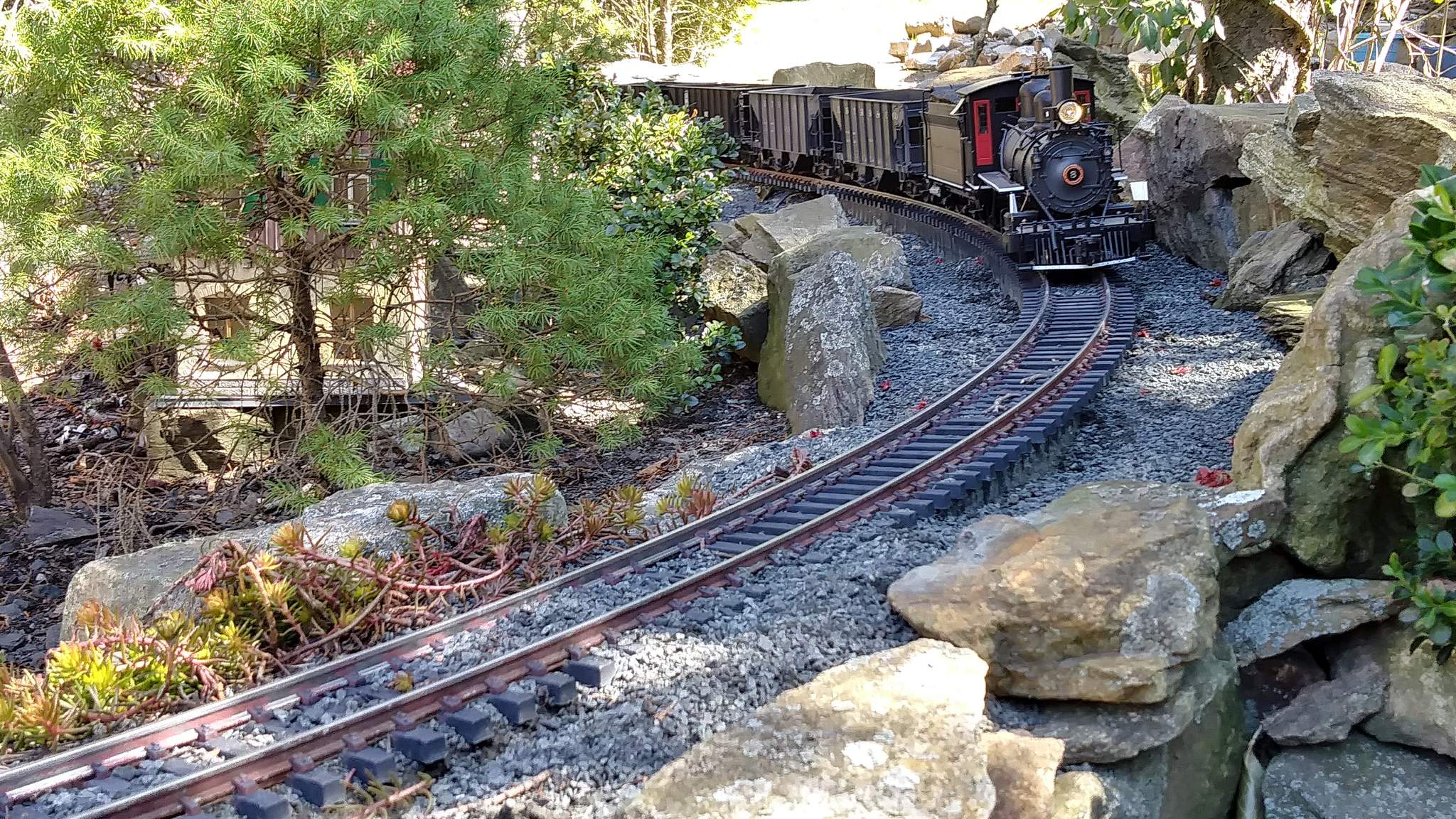 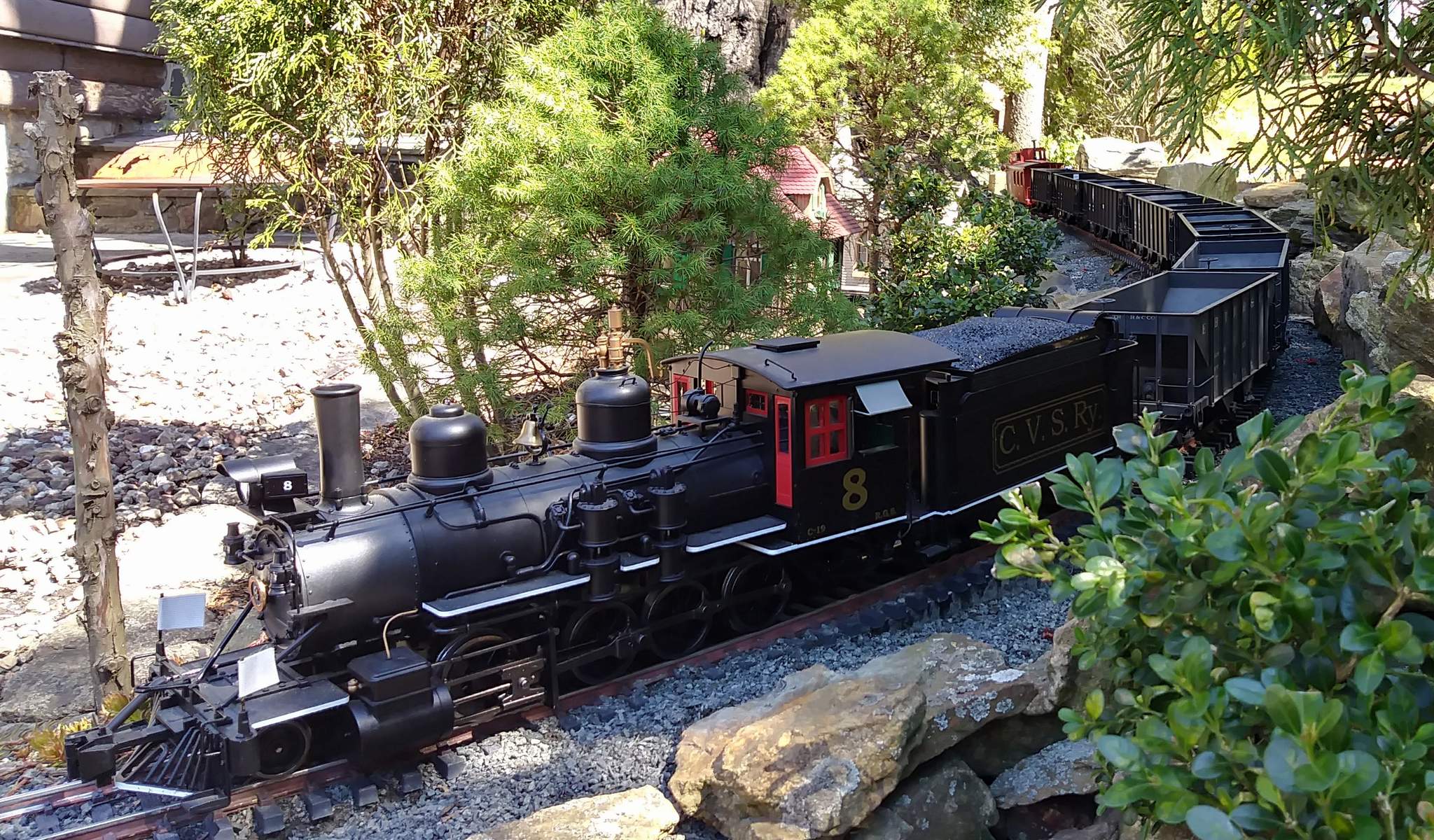 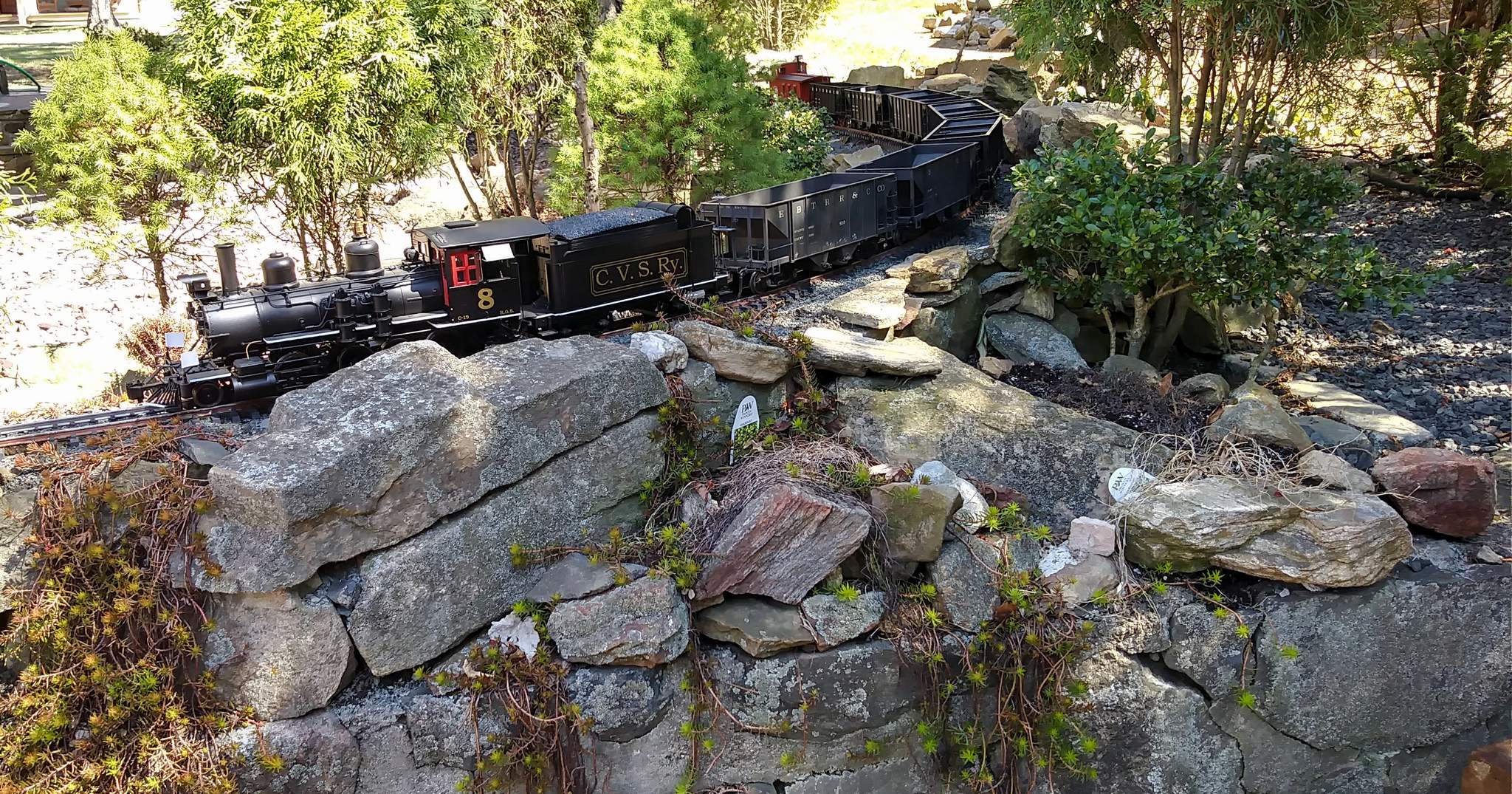 Thanks Rick. It’s getting there (https://www.largescalecentral.com/externals/tinymce/plugins/emoticons/img/smiley-smile.gif)I’ve really just begun cosmetic work. Lots of dry stack got disturbed this winter. It was warm and wet with lots of freeze-thaw cycles. I really want to get this area back to where it was a few years ago with Wall Station and the Mik Challenge platform. The platform needs some repair; but lately all I have is time, so.

Beautiful, Jon… Both the train and the railroad…

I’d love to see that. Yes; the two-bays have been immediately pressed into service. In general; I don’t weather my cars; but these two have me re-thinking that decision. I also followed tour lead changing out the cast trucks on one of mine for Delton arch bars. The weight savings is significant and I need some Vulcan trucks for the EBT Boxcar kits I got from Bob years ago and have not built.

Today I added two more to the string; Delton wood style hoppers. Coal Dump Curve is temporarily out of service while the stone face gets re-set, but they sound great on the indoor and with all that weight, the C-19 throttle response is very realistic.

Well, you did ask.

and I need some Vulcan trucks for the EBT Boxcar kits

Jon, the vulcans on the 2-bay hoppers are only 4’ wheelbase. The standard vulcans are 4’ 8". Not that anyone will see them under the boxcar! I ended up with modified andrews trucks under mine, and I also had some bettendorf’s that were pretty indistinguishable. I think Rich Yoder may still have some spares ($95+pair.)

Here’s the casting that Alan is now selling:

I found several references to the RGS 62xx and 63xx flatcars which says they are 4’ 8" wheelbase.

Thanks Pete - Unfortunately, I don’t have the budget to be a rivet counter, so I compromise to use mass produced stuff. If I ever win Powerball, then all bets are off and I’ll hire Rooster full time to build steam museum quality era models (https://www.largescalecentral.com/externals/tinymce/plugins/emoticons/img/smiley-surprised.gif)

You may be more of a river counter than you realize. Your hopper train is very realistic.

The EBT had exactly 4 of the 2 bay hoppers that Bachmenn produced. They were used to transport rock.

Thanks Stan - I guess today I should open my EBT Bible (Lee Rainey’s book) and do some more research. I know there were some that were made by the Pressed Steel Co. - the original 4 perhaps. More were made in the EBT shops by copying the design. 802 was rebuilt and converted to side-dump by the FEBT quite a few years ago. From memory, I don’t know how many in the 800 series were produced.

Thanks Stan - I guess today I should open my EBT Bible (Lee Rainey’s book) and do some more research. I know there were some that were made by the Pressed Steel Co. - the original 4 perhaps. More were made in the EBT shops by copying the design. 802 was rebuilt and converted to side-dump by the FEBT quite a few years ago. From memory, I don’t know how many in the 800 series were produced.

Yes you should open the book. (http://www.largescalecentral.com/externals/tinymce/plugins/emoticons/img/smiley-cool.gif)Chris Coleman’s website used to have a full list of the hoppers, what they used to be, and where they are now. (Norton says it is a known malware site, so I guess Chris has been busy with other stuff.)

For anyone who is a rivet counter, or has been building these things for years, there were, I think, 30 PSC hoppers bought around 1910 that are larger than the “rock” hoppers built in 1930 as 2-bays, (btw those 2 bays are exactly 2/3rds of a 3-bay, so EBT probably used the same jigs, etc. I even have a photoshopped 1-bay somewhere, as the B’mann came out before the Accucraft 3-bays and I was contemplating cutting 2 of them to make one 3-bay.) Those B’mann models are quite accurate, though there’s a thread somewhere by Kevin on how to improve them! The ‘rock’ 2-bays replaced some steel-lined wooden hoppers with extended sides that were 20-30 yrs old and presumably worn out.

The PSC cars were found to be a bit top-heavy so EBT rebuilt them as slightly longer 3-bay hoppers, the generic type you see today. They were numbered 800/900/1000+ and I believe EBT made over 250 of them - that’s how many were left in 1956 when they turned off the lights.

Thanks Pete - So to clarify; Which car was used as the prototype for the Bachmann 2-Bay? If it was the original order from Pressed Steel, than why did they put Vulcan trucks under it. I knew all of this once; I think.

I’m very familiar with Chris’ website. I’ve been there recently and didn’t get that warning. I did refuse to install Norton’s browser extensions due to how poor they perform (slow).

EDIT to add: Here is 807 built by Pressed Steel with arch bar trucks, still in the MU yard…

One more EDIT: According to Chris’ roster; 802 pictured in an earlier post above, was biult by PSC and re-configured by EBT to side dump sometime before 1943. It was restored, but not converted by FEBT.

to to clarify; Which car was used as the prototype for the Bachmann 2-Bay?

The 1930 build of 2-bay hopper cars for Narco ganister rock service was the prototype for the Bachmann model. All of the 4 are in the Mt Union yard, according to Chris’ site. The vulcan trucks came from the high-side wooden/steel-lined hoppers that were rebuilt from low wooden hoppers some years earlier. They were quite short so EBT used 4’ wheelbase trucks.

It is the 600 series cars that Bachmann modeled. All 4 were built in 1930 by the EBT to carry rock. Two are in the front line and easy to photo the other two are in the second line of hoppers. Photos of two taken in 2007 follow.

Here is 807 built by Pressed Steel with arch bar trucks, still in the MU yard…

It was still there when I went to the FEBT Reunion in late 2016. I took a few liberties with my “1910” freight, which included those 2 steel hoppers (with archbars, pretending to be newly delivered PSC 2-bays,) a couple of Hartford Q&T hoppers modified to more closely match the EBT type with high hopper bottom return wheels, plus a Delton wood frame hopper, and a rebuilt wooden hopper with a steel lining and 4’ vulcan trucks. Plus caboose #26 and EBT #7.

Guess it’s time to review the premise of the Candlewood Valley. I am not attempting to model the EBT or it’s trains. The railroad is set in the present day as an operating museum. Our right of way a fictional narrow gauge line that was owned by the New Haven and constructed with lots of New Haven and EBT flavor mixed together. Rolling stock was acquired from several narrow gauge lines in the West and East. Lots of stock was purchased from Kovalchick after they purchased the EBT. In my album here and on the CVSRy Facebook page, are photos of some of our equipment tracing the source.

My renewed intrest in the 2 bay hopper was kindled by Pete’s modification to make them look more like the 807 in the yard. So, based on this discussion and the photographic evidence, the C.V.S.Ry. could have very well have purchased examples of both types; so long as we don’t get that scale ruler too close!

Jon Great shots …you still have me looking for “Roosta”

Jon Great shots …you still have me looking for “Roosta”