I was at a bit of a loss at the start of the 2022 Mik contest. Considered a number of projects before going with Middleton Platform. One of the items I considered was redoing the ‘Nocturne Deep Hotel,’ which began life as a ‘Christmas House.’ Ages back, I tried to modify it by tacking a tower onto the front…which didn’t go too well. It got rejected because it wasn’t ‘right-of-way.’ Anyhow: 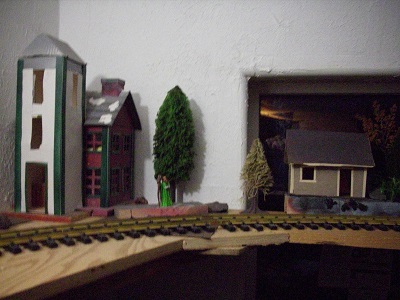 When Mik finished, I went back and took another look at the Hotel, actually pulling it off the shelf this time. That was when I realized I’d done a fair bit of interior work on that structure, wasted because it’s set way back in a corner: 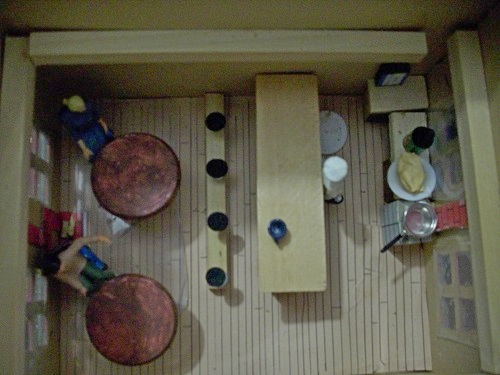 That made me decide against putting the hotel back in its old location. Remaining real estate on the layout is sparse, but there are a couple possibilities. Which left me with the matter of fixing the tower exterior…and coming up with something else to stick in that corner. 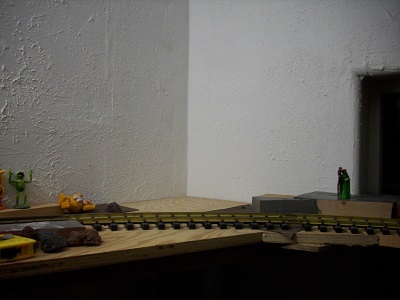 Now, the ‘haunted hotel’ theme is kind of set for Nocturne Deep. At first, I considered going this route:

But…they were too expensive (I’m poor now) plus I still have piles of parts left. And I’ve built a quite a few facades in the past. It also had to be a facade, because space at that corner is tight - just barely big enough for the old hotel, and I wanted more atmospheric scenery.

Now…places like this tend to be parked atop a spooky hill, reached by a switchback road:

So, I have spent odd moments this past week building such a hill: 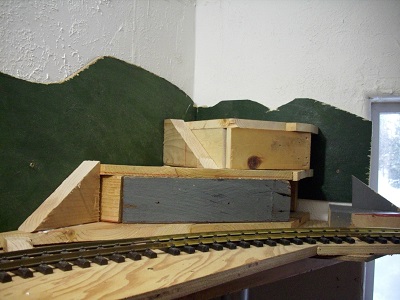 This morning I slapped on the plaster and aimed el-cheapo spray paint in its direction:

Next week I’ll start on the facade. With the hill built, the space up top is 13.5 inches wide (probably knock that down to a foot) by 3.5 to 5 inches deep. Have to wedge the whole thing in that plus the appropriate gothic fence up front.

Not much of a project, but it might keep me occupied…

You might be able to find a frontal shot of a haunted house you like, such as this:

Then, you can print it to scale in color. Vinyl prints can be had from companies like Fastsign. Paper’s ok, but you made need to spray it with something to preserve the color. You can print it in sections.

Then, cut and glue it, in different sections, to different pieces of foam core. Say, the center section, vs. wings. You can toss sections you don’t want.

Add depth between sections, with more foam core, to make it more 3D. And paint the edges black.

If you want to go all out, you can cut out the windows, blacken the cut edges, put some off-white paper or plastic over the opening from the rear, and add some cheap LED’s. Maybe box the whole thing in on the rear to avoid light bleed on the wall.

Whether you use any of this or not, it looks like fun! Good luck,
Cliff 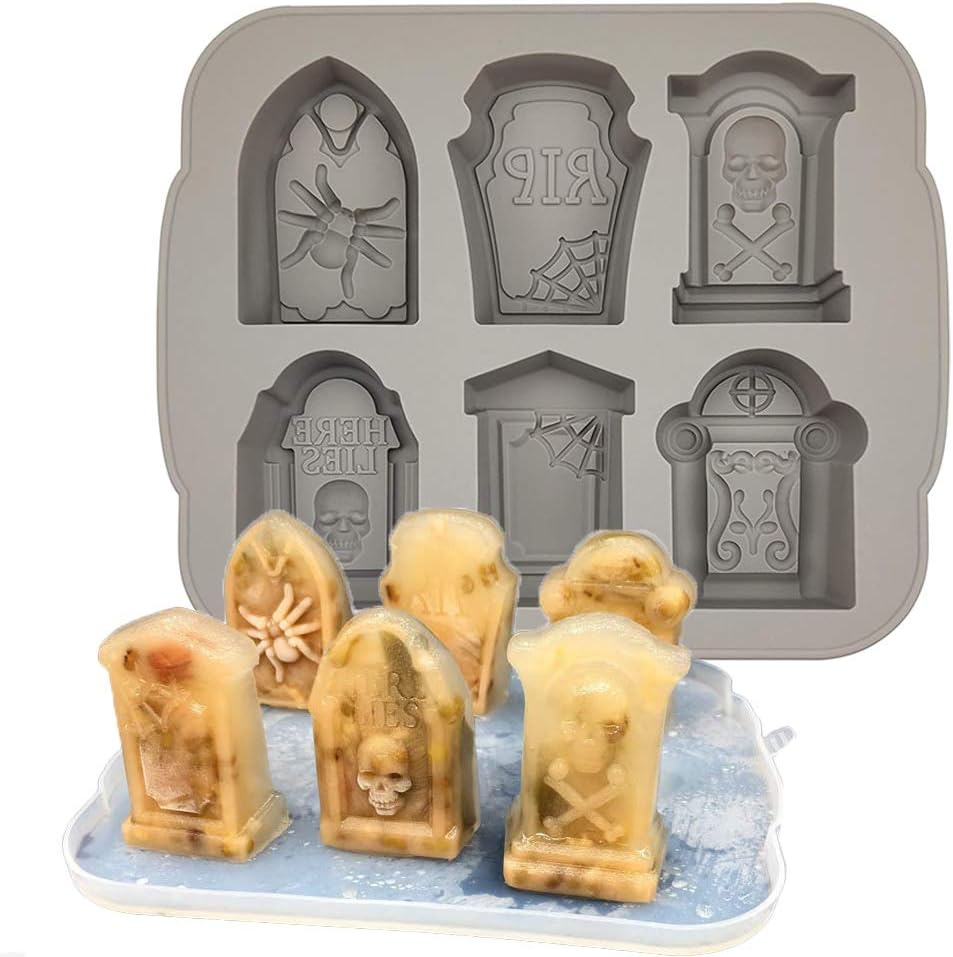 Halloween mold, resin molds, silicon tombstone mold, silicone mould, spooky molds, horror molds Features: It is very easy to clean. It is safe to use for your kitchen. The use of high-quality food grade material. Durable,...

The product itself ia great. you used it as table decor for Halloween. They're super cute, but quite small. The figurines are very sturdy, A set of 7 decorations for Christmas Nightmare Jack cake.br These figurines are... 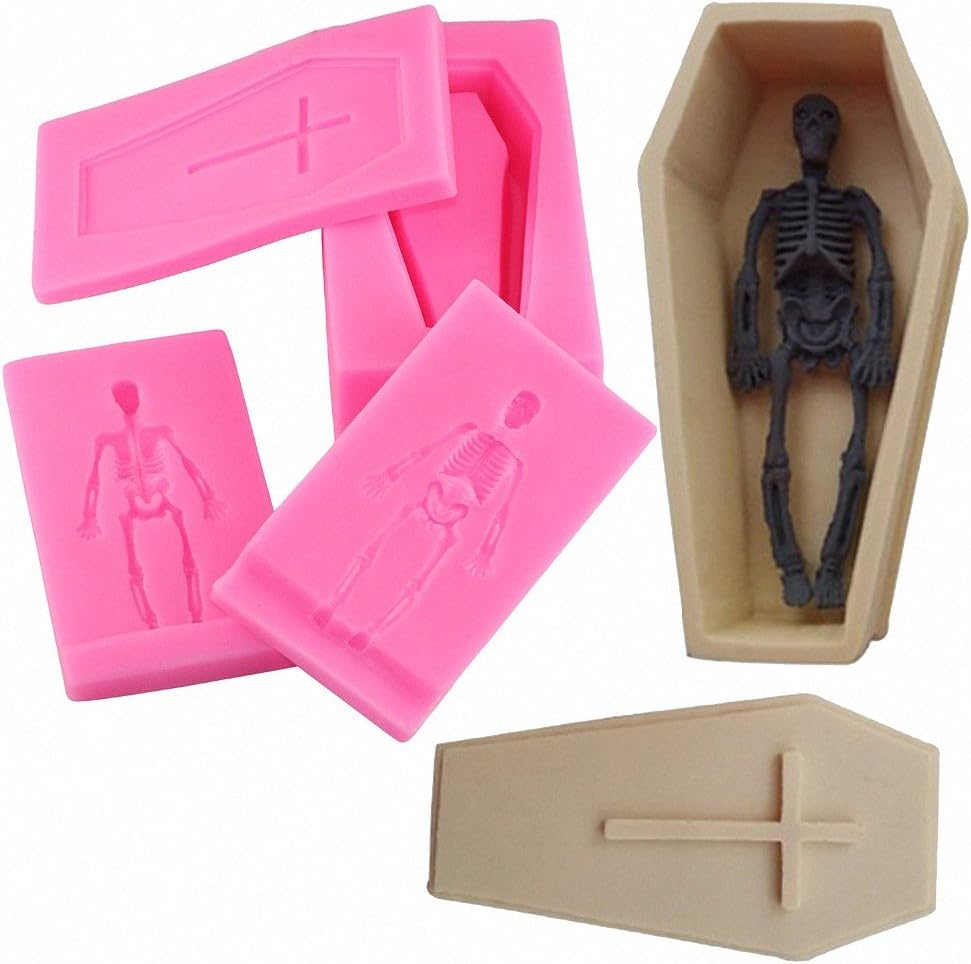 I have wood scraps and the other material in abundance. What I don’t have is foam board. Right now, I’m playing around with the bits and pieces. This is very much a ‘build it out of whatever is laying around’ project - with maybe one exception… that being the gothic fence for the front of this monstrosity. Probably go with the LEMAX Halloween fence.

As to figures, well, I’ve got quite the pile - everything from zombies, ghosts, and vampires to the ‘Scooby-do’ gang. Finding homes for these little people is part of the point - with a few exceptions, I see the buildings as either ‘background’ (meaning far enough away to let the details slide) or as ‘gags’ or ‘props for gags.’

An update of sorts.

The Nocturne Deep Hotel is mounted on an 1x3x11 because that was the size of the wood available. Used stray wooden slats of the sort used for spacers or surveyor’s stakes to make a frame, which I then topped with cardboard. The windows are leftovers from another project - might have been Colorado Model Structures to begin with. Decided to tack on clapboard made from a pack of craft sticks that were rattling around.

I had other pics but this is the only one I could salvage. 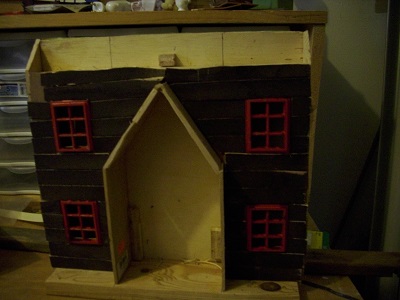 Currently I’m getting set to tack on some towers.

Glued the last bit in place this afternoon. Put the ‘Haunted Hotel’ in its designated niche a few minutes ago. I’ll add the fence and figures and scenery stuff tomorrow. 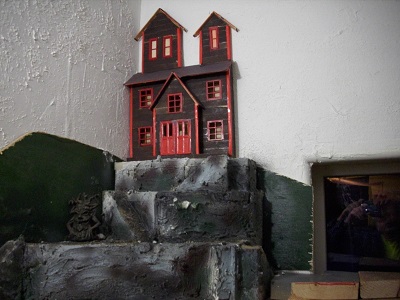 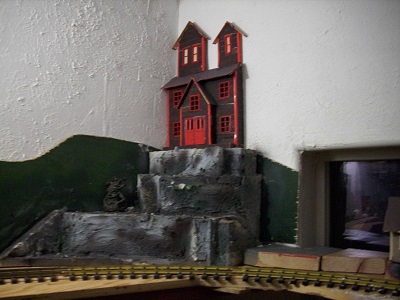 Bought another pack of craft sticks. The intent is to use them to rehab the little cardboard cottages I made over the holidaze and maybe make a small station about like Dan Hylar’s Mik entry.