I stumbled upon this Australian company when I was searching for iPad panel options, and I’m intrigued. I am working on a yard with a dozen turnouts, and am contemplating pneumatic control with solenoids and an iPad panel of some sort. These guys have an app that looks to be really elegant.

The other option, of course, is JMRI.

Anyone have experience with Control Panel Designs?

I made mine with masonite and toggle switches. It is moble and plugs into the layout with two 24-pin military-spec connectors and into the 120 with an extension cord on the patio. It is set up with 24 blocks using three “cabs” with AristoCraft Train Engineers that plug into it and has reversers built into it so I can run several engines simultaneously through point-to-point settings.

LEDs indicate which way the trains are headed (clockwise/counterclockwise) and there is a built-in voltmeter.

Each of the three cabs can be set to either direction or turned off completely with the flip of a toggle switch. I find this to be extremely necessary! When a train derails, has an accident, etc. (will happen eventually), it is nice to stop all the action with a single flip of a switch, that you can even ask your guest/wife to flip without learning a bunch of controls or looking for a remote.

It is also set up with a diode matrix that throws groups of turnouts (as many as 20 at a time) with the toggle of a single switch. 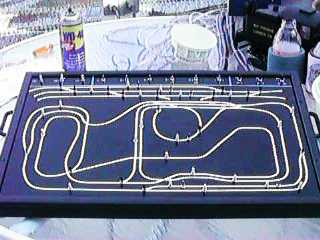 I’m using DCC, and DCC-controlled switch machines from Train Li. As a winter project a few years back, I went whole hog in making up a wireless panel system to control them.

There are three of these boxes. They’re laid out on the philosophy of pressing a button and lining up turnouts for a loco in that position. The buttons pigtail into an old parallel printer cable…

Which plugs into a transmitter for a radio-controlled relay. The relay board can be used for whatever. Mine are mounted on a panel, wired into an NCE Mini-Panel to run scripts that thrown sets of turnouts according to which button is pressed. This panel is in another watertight box.

OK, there are drawbacks to this approach. The script-writing involved a fairly puzzling spreadsheet, and it wasn’t easy to get everything right. If I had to reprogram everything, it wouldn’t be easy. Main problem though is that I’ve had consistent issues with the Train Li switch motors. Sometimes they decide to work in the opposite direction, and when you’re using a script for a route, the whole route brakes down, and you have to override individual switch machines via their DCC address. I have my own switch drive design, and am planning on building those as replacements.

Anyway, to control solenoid valves, you can route the relays directly to them and use the buttons to toggle the relays (and therefore the sv’s) on or off. Or you could use a DCC solenoid valve controller, Greg uses something from Digitrax as I recall.

Yep, Digitrax DS64, cheap, will control four 24v solenoids, all powered from the rails, so no help to Eric unfortunately.

Thanks. Very impressive. I’m not running track power, so my needs are a bit simpler. I do really want my panel(s) to be wireless, as switching in my yard will require walking around a bit.

Very nice design on those panels. I’m not married to the pneumatics, but haven’t been wowed by the outdoor servo options. I had forgotten that you were working on a new design. Where does that stand? Honestly, I would prefer an electronic option, as that’s more in my wheelhouse. I don’t mind using DCC. My track will be dead, but that doesn’t mean I can’t run a DCC bus alongside it.

Thanks Eric. I worked on the switch machine design over the winter, and got to the point of ordering the initial circuit boards. But I’m afraid I haven’t put it together yet for testing… need to do that.

So Eric, if you use their system, the DCC version integrates with an NCE command station, and adding the Digitrax Ds64’s would run your pneumatic solenoids.

That would be one solution.

So Eric, if you use their system, the DCC version integrates with an NCE command station, and adding the Digitrax Ds64’s would run your pneumatic solenoids.

That would be one solution.

After having gone through so much failure and hassle with servo-based switch machines, I’d have to say that the simplicity of Greg’s approach makes me wish I’d gone down that road instead. Fewer moving parts; and the parts that do move are robust metal components. For myself though, I’ll keep going with my R&D, because I’m stubborn, and because I have fairly reasonable hopes for the current design.

I think I’ll likely go with the pneumatics. It’s very expensive once you add up the piston and the solenoid, but I like the idea of keeping the electronics out of the weather.

If I use JMRI, I can use any number of multi-relay boards, either USB or ethernet, since it can be easily scripted in python or javascript.

And FWIW, by the time you outfit a nice Piko weatherproof machine with a DCC module (I couldn’t find their earlier single-unit modules, only the 4-unit controllers), you might be looking at around $60-$75 per turnout.

I have no experience with the new fangled stuff you are discussing. 18 years ago when I first built my indoor RR as a folded dog bone loop, I built a control panel / interlocking controller. Unfortunately; I can’t find any pictures of it. It was Route based switching for yards. Press the button on the destination track and it would throw all the switches need to get to that track from the main. All based on diode logic that was discussed on George Schreyer’s web site. I still have it on display, but it is no longer used since I switched to all manual switch control.

I had to make a decision on this, since I can’t lay any track until I figure it out. I have decided to go with the SVRR pneumatic system. I’m going to use JMRI and LCC to control it, using the LCC components from RR-CirKits. I think this is the best approach, as it will allow me to integrate signals on the bus in the future, and the computer will already know the positions of the switches.