Way back at the end of April, I was fortunate to be able to purchase one of two Bachmann C-19’s from Ken Brunt’s estate. Had I known there were two, I probably would have chosen the other one since I already have a D&RGW #345 on the roster, but at the time I didn’t and was very happy to get a second #345 and my third C-19.

Upon returning home I began the process of removing the RCS control system from it, in preparation for a RailPro install. It already had a nice speaker, but lacked an enclosure. I found a plastic jar that fit the speaker perfectly, so I mounted the whole mess with high temp hot glue. That was in early May. Since then life and other projects took all my time.

This week I decided that I was going to finish the RailPro install and get the loco in-service before the early fall operating season, which is the best weather of the year here.

Since this is my third install in a C-19, I already had the plan figured out. Just a matter of soldering up lots of wires. My C-19 installs take advantage of all the DCC functions Bachmann built into the C-19’s. I have separate control of Headlamp, Taillamp, cab light (all dimmable), class lamps, firebox flicker and smoke. I don’t use the smoke, but if I want to in the future, there is a remote-control function to turn it on!

I have become really OCD when it comes to wire management. This is perhaps my cleanest install to date! I could never do this for a living as I’d only be able to get about $1/Hour since it takes me so long. This is the result of three long evenings… 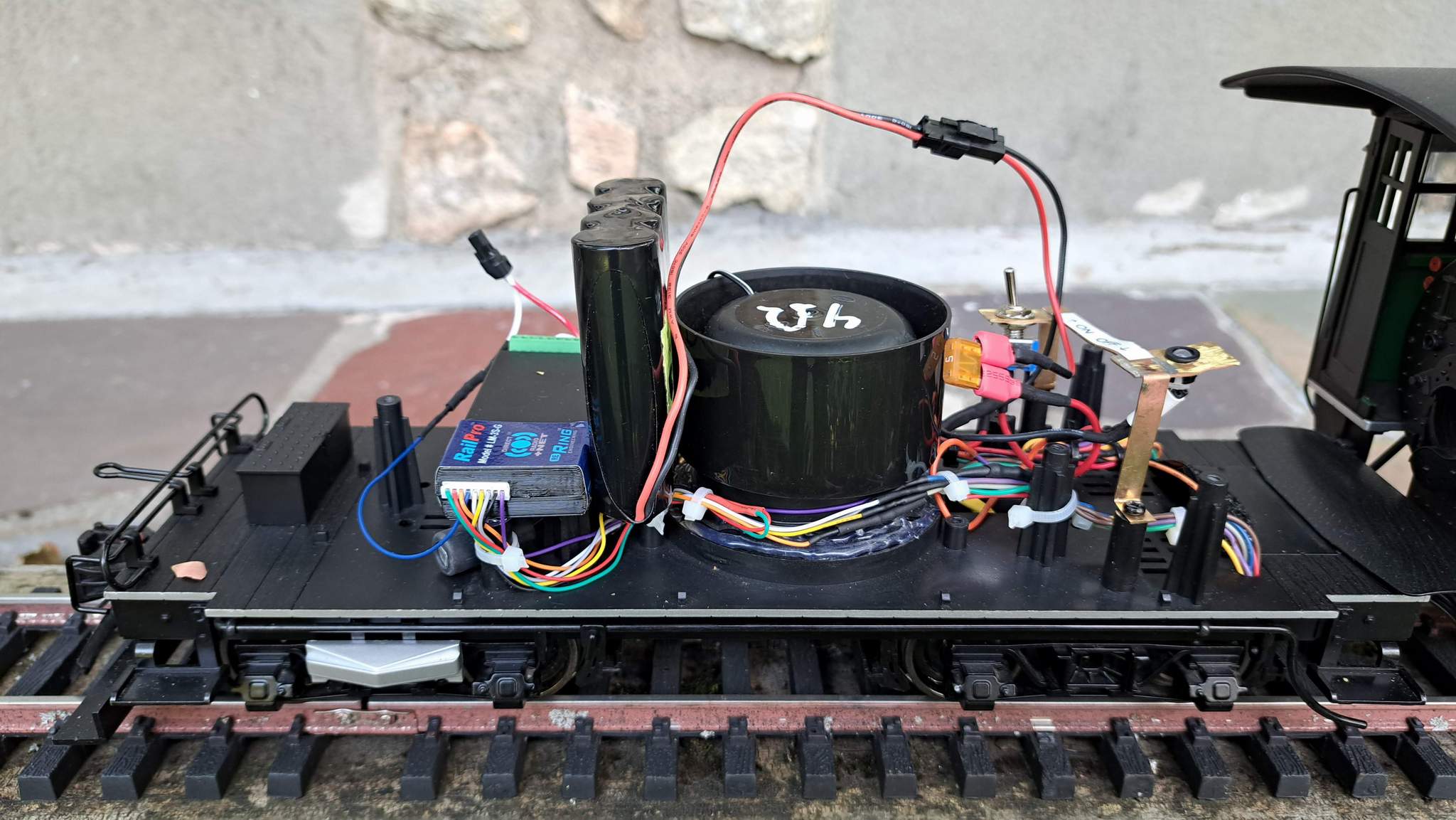 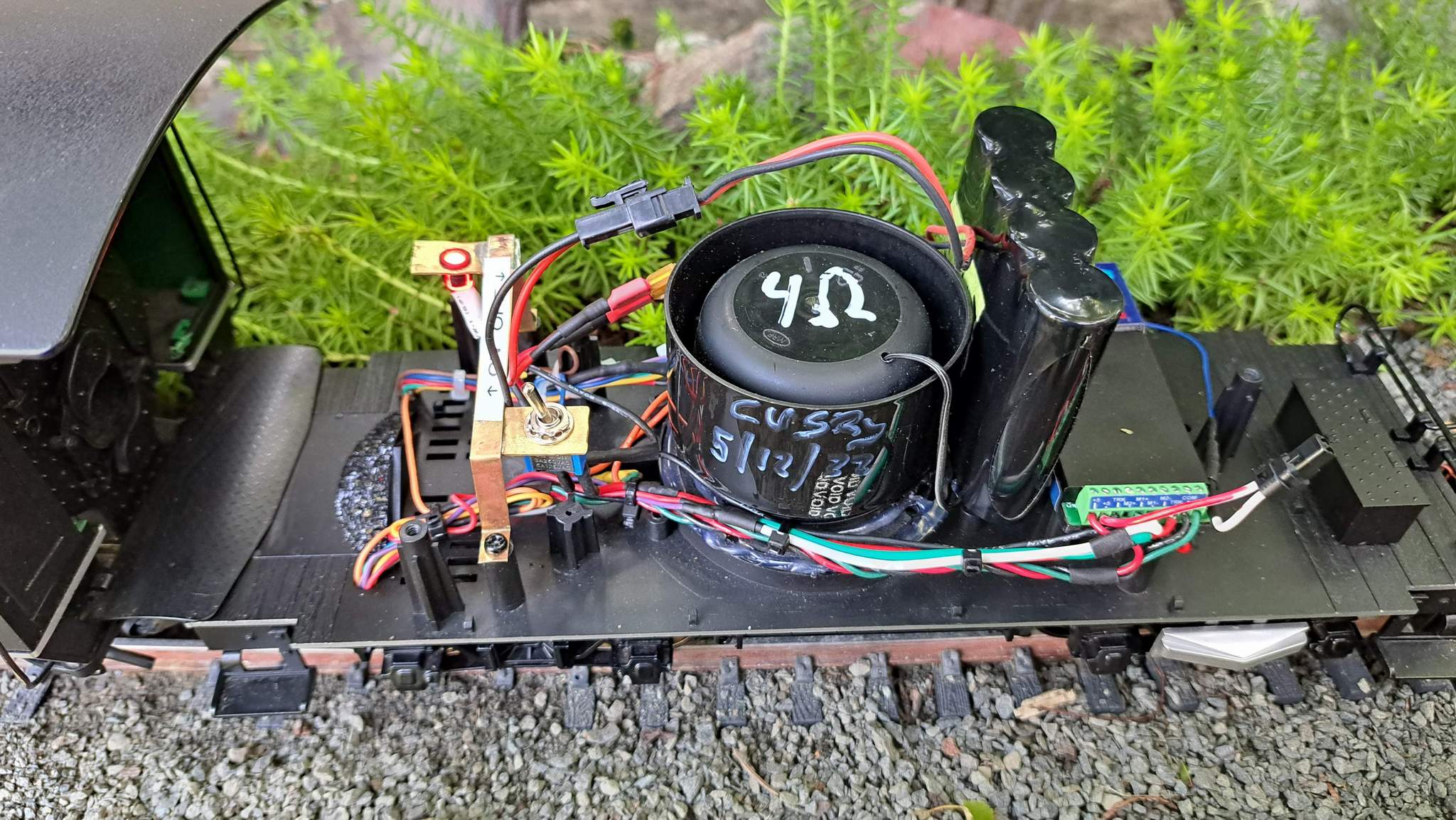 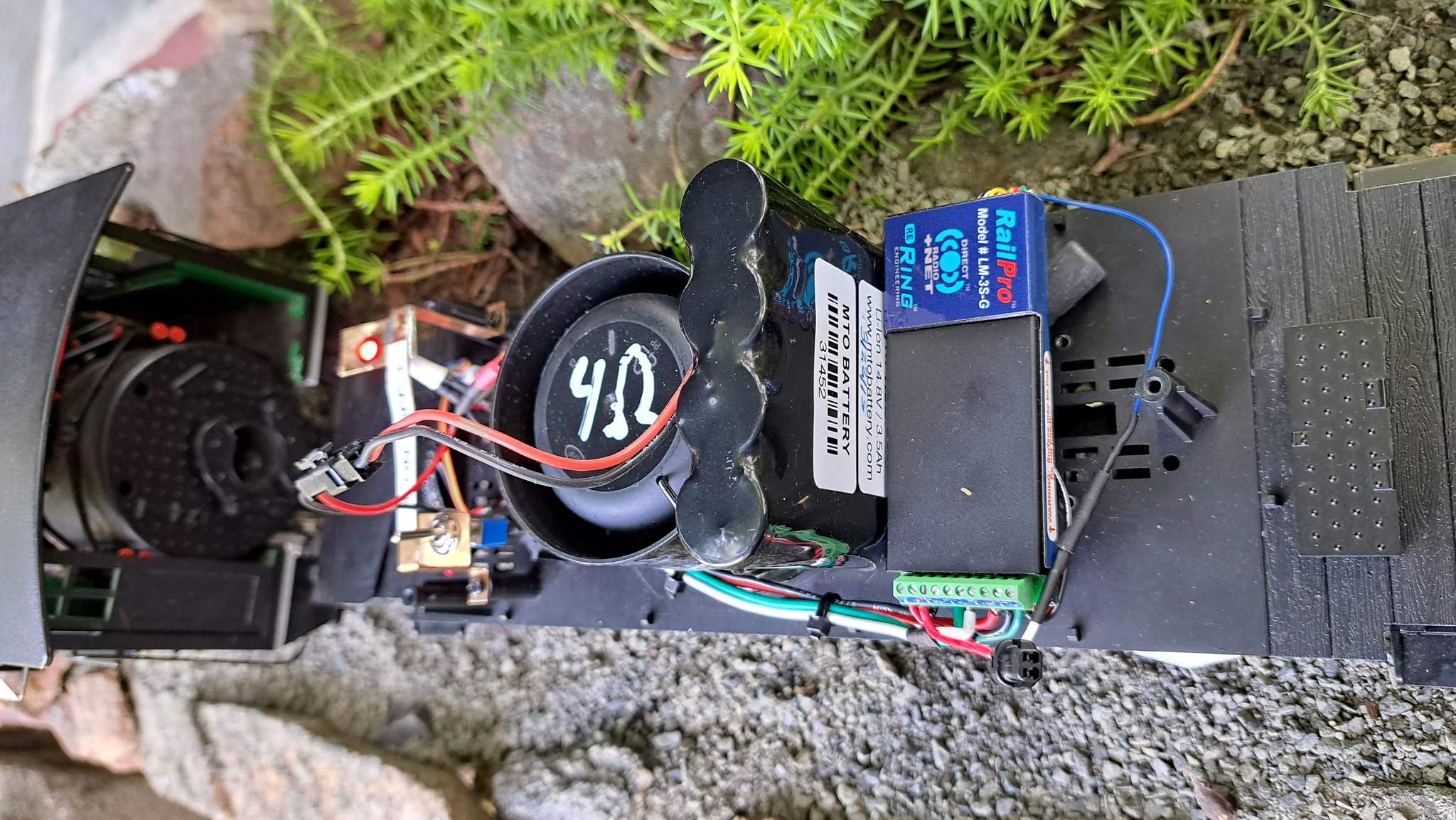 So, now that it’s operating, I have a dilemma with having two locos numbered 345. I really didn’t want to take the time to repaint things, so I modified the “movie paint” idea that uses black shoe polish by using matte black car wrap vinyl to black-out Rio Grande and change the number from 345 to 4 which is an available slot on the C.V.S.Ry. roster. I will have white vinyl cut for the tender to letter it for the home road. Here are some shots of my efforts. Depending on the light angle, the vinyl is quite obvious, or can disappear. 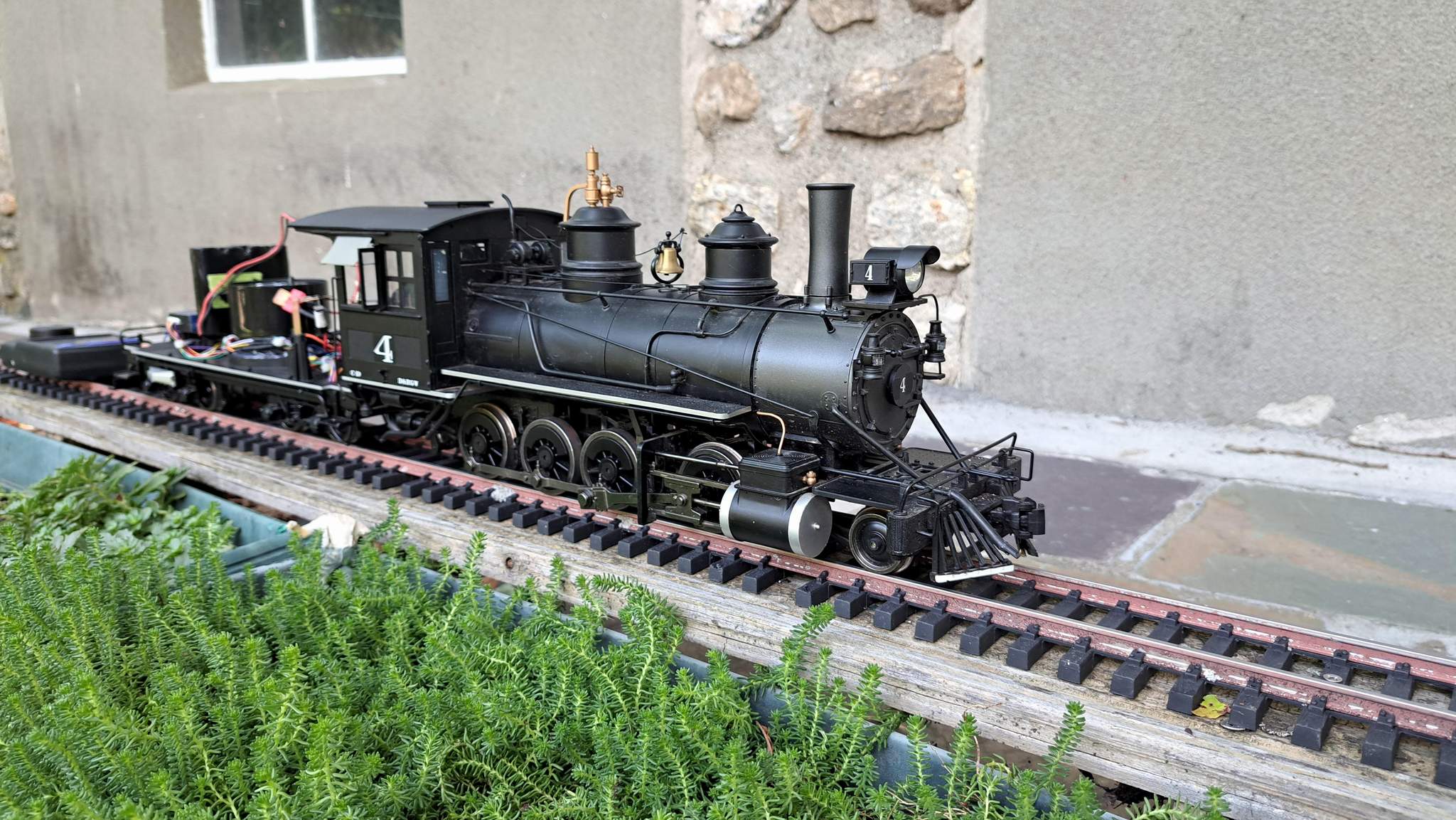 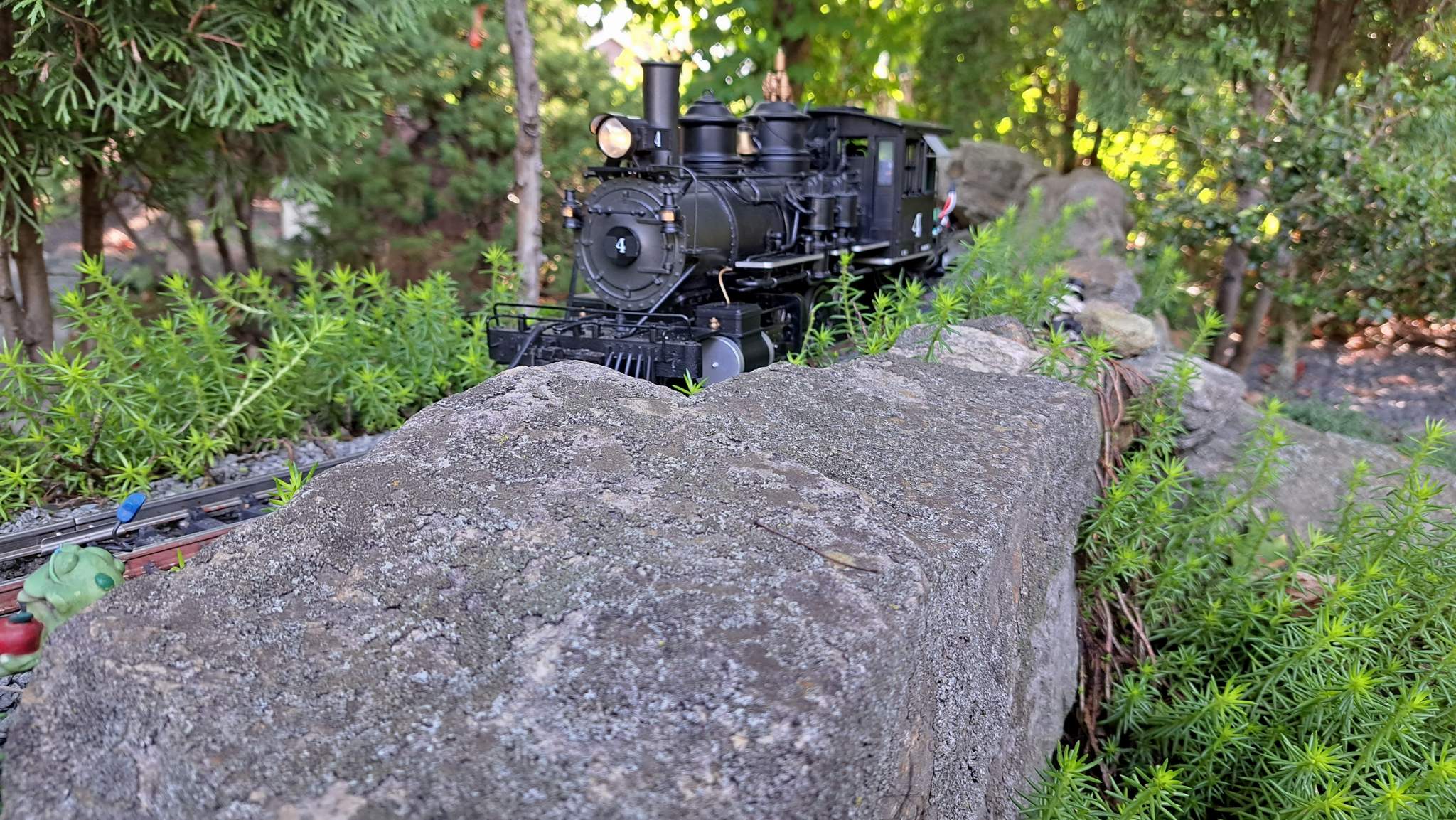 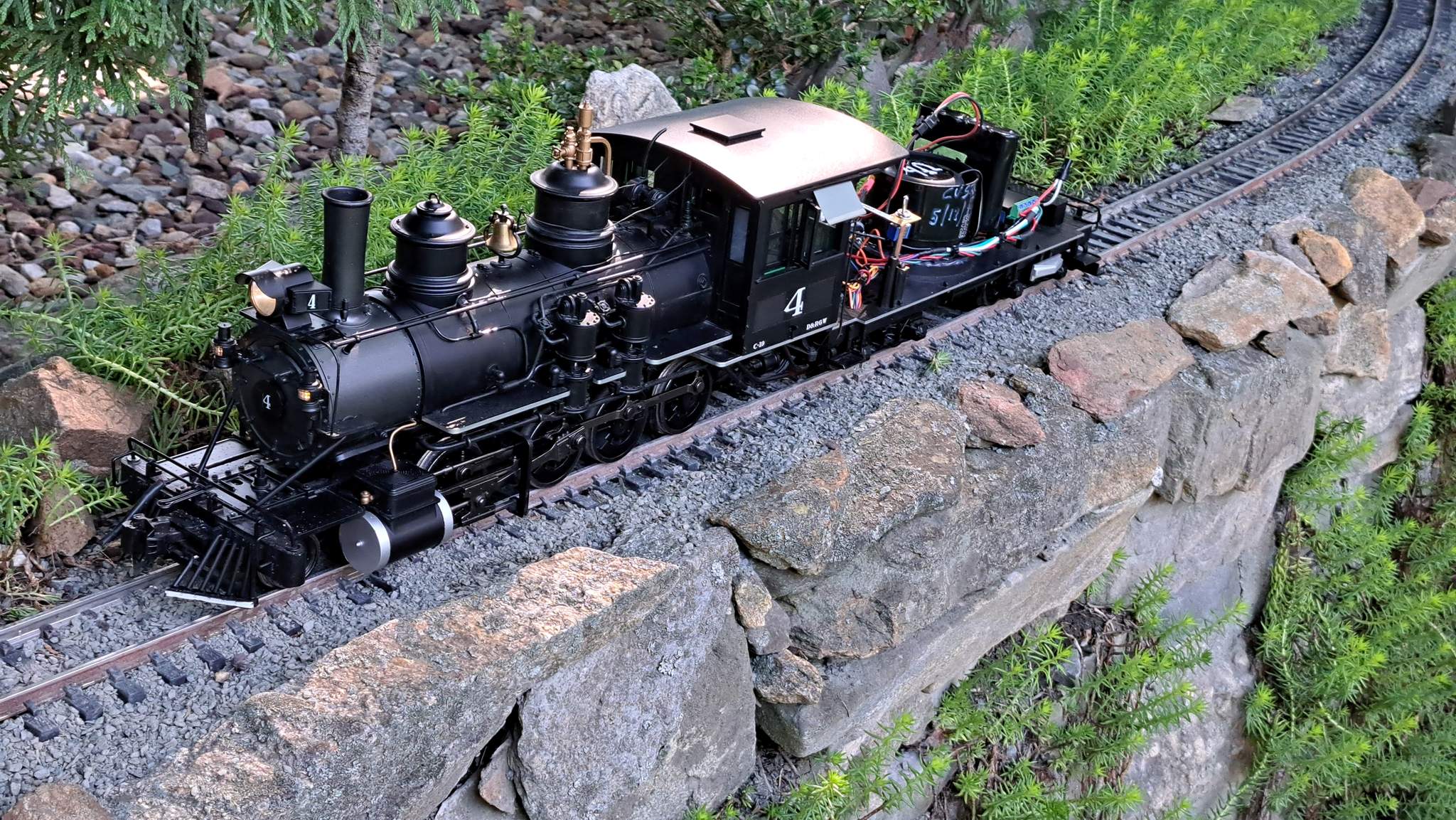 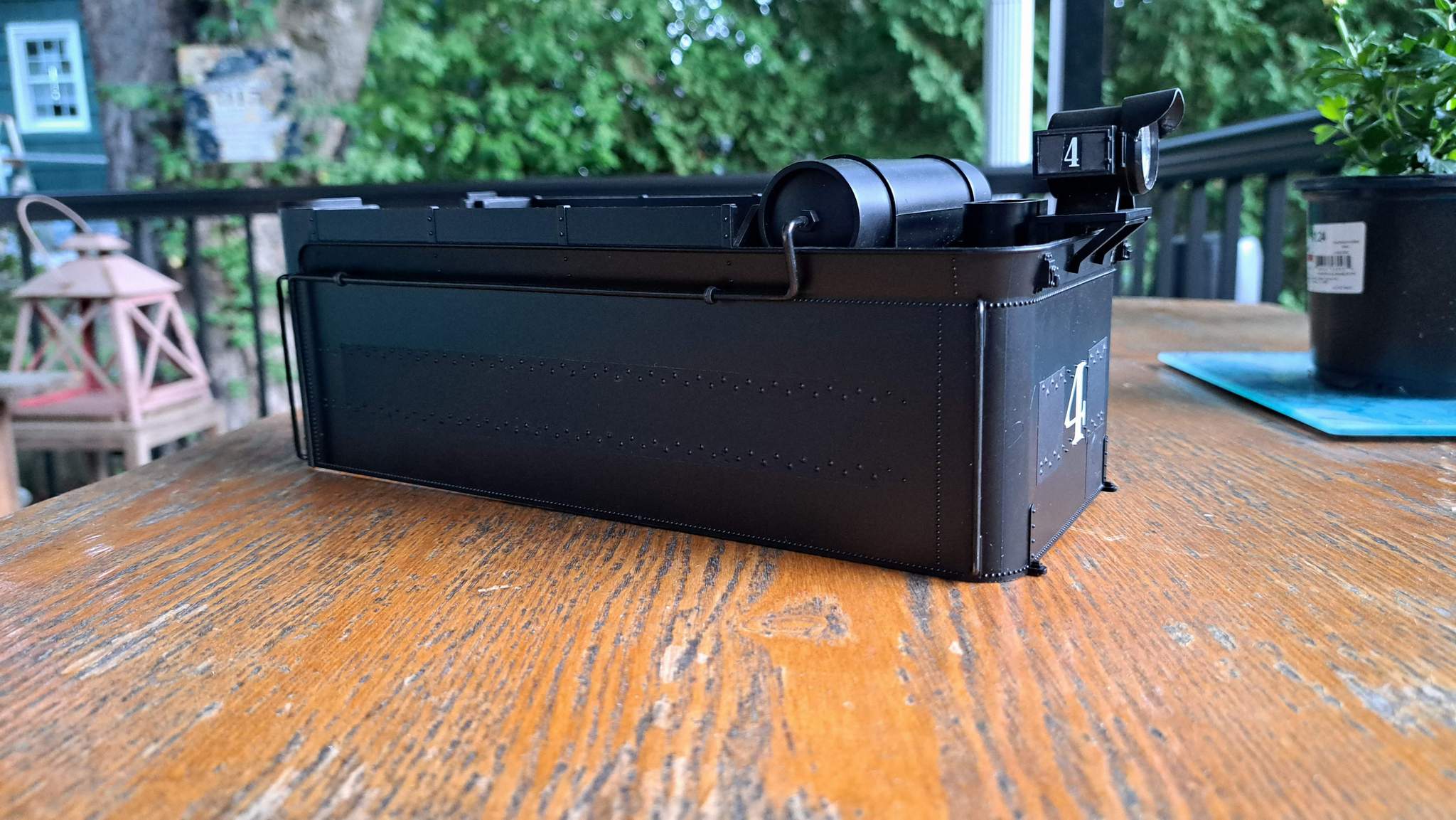 Once the tender shell is back on she will be out on the line for road trials. I lubed it up on arrival, but I noticed while testing on the indoor track that it’s not as smooth at slow speed as her two sisters. I may need to open up the gear box and check for problems if it doesn’t smooth out with some run time.

I may end up painting the tender and the number blocks at some point in the future, but for now, the vinyl works. I’m still searching for a Baldwin red and brass number plate tie-tack like the one I used for #8… 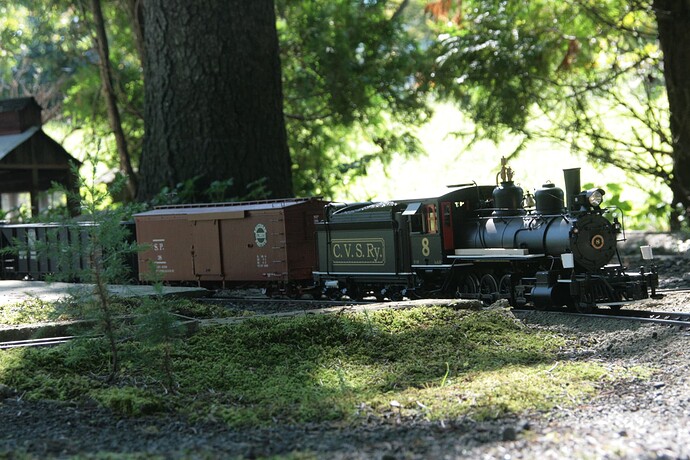 UPDATE: The FEBT Company Store has the Baldwin number plate pins in-stock, so I ordered a #4. Shipping was almost as much as the pin, but that’s life!

I was a bit worried that the tender shell might not fit, but with just a little fiddling (and removal of the battery) it went right back into place. In the orientation shown above, the battery is too tall to get the coal load fully seated, so I moved it to sit on top of the speaker.

Once the tender shell was back on, road trials began. I started with a tractive effort test pulling 9 cars up the steep grade approaching Coal Dump Curve. As expected, about three quarters of the way up it began to slip. Here she is at the point things stopped moving…

I removed cars until it could start on the grade and easily climbed through the curve pulling 6. Number 8 was steamed and ready to assist, shoving the dropped cars up the hill behind 4, then helped to get the train around the wye in two sections. For the return, and one more round trip, as seen here, Number 8 and Number 4 ran as a double header… 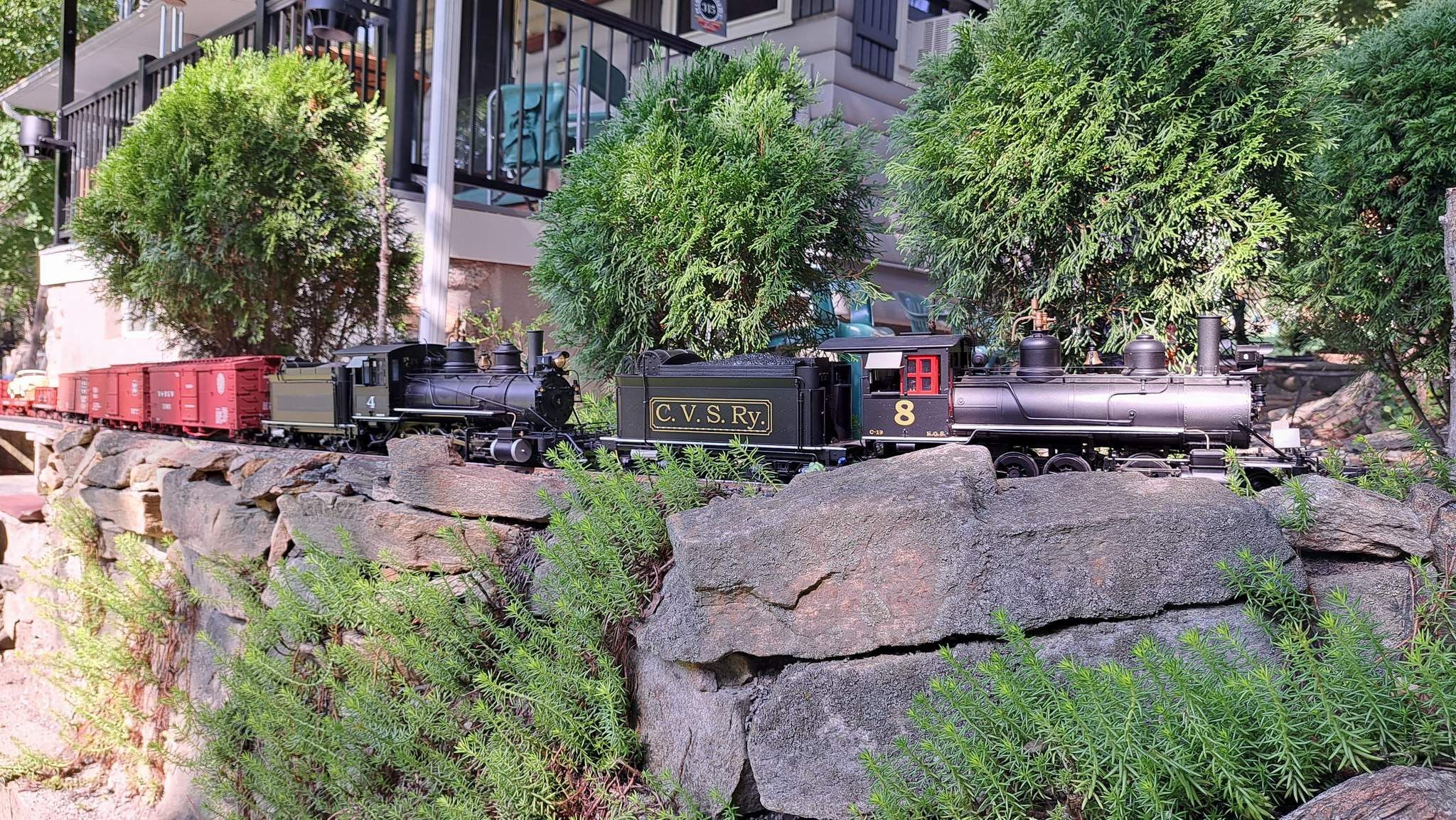 Because one of my wye tails is quite short, No. 8 dropped off at Pine Summit and ran light around the wye before shoving the second section around to couple to the train. No. 8 then retraced it’s path around the wye to get in the lead again… 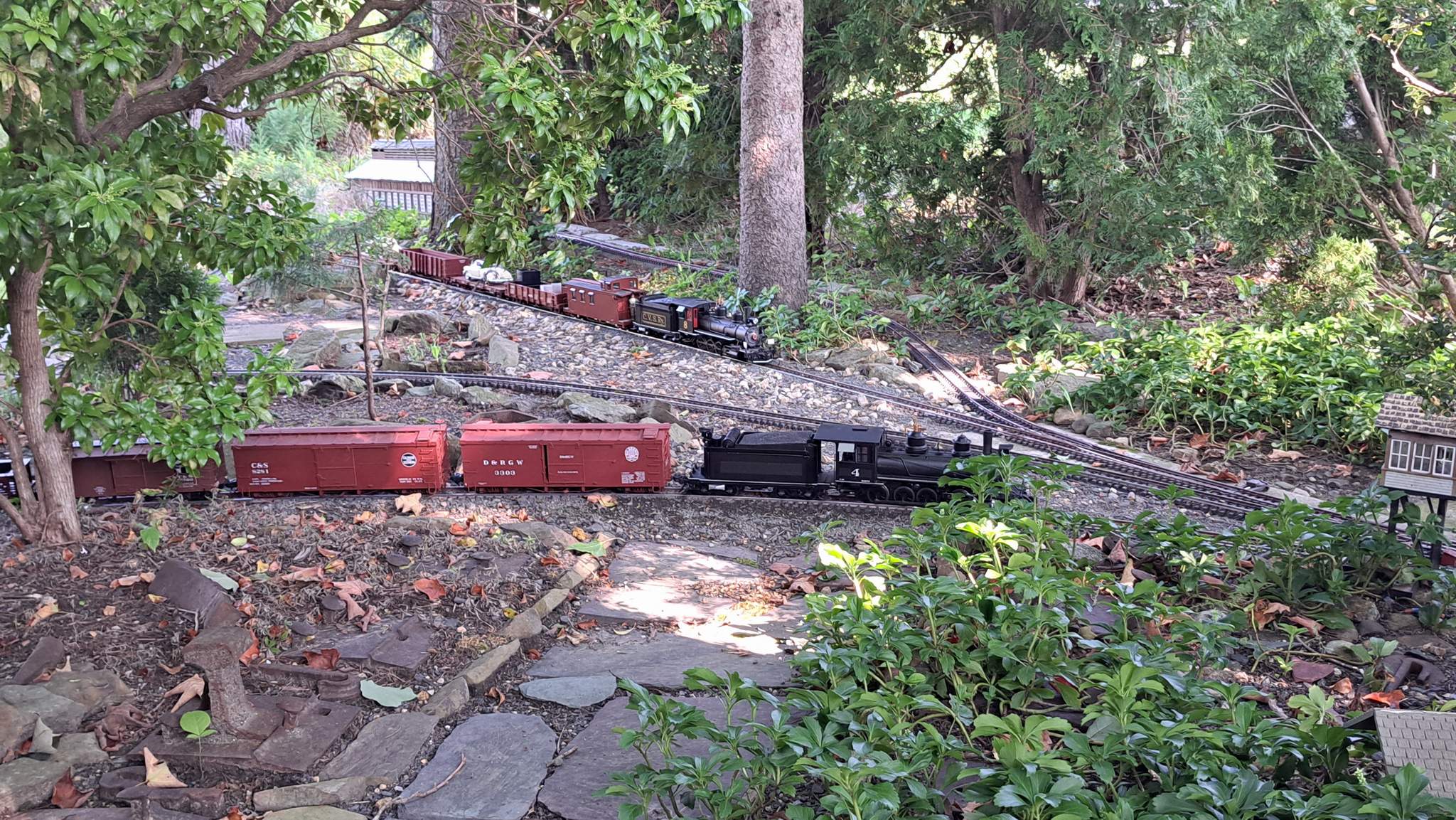 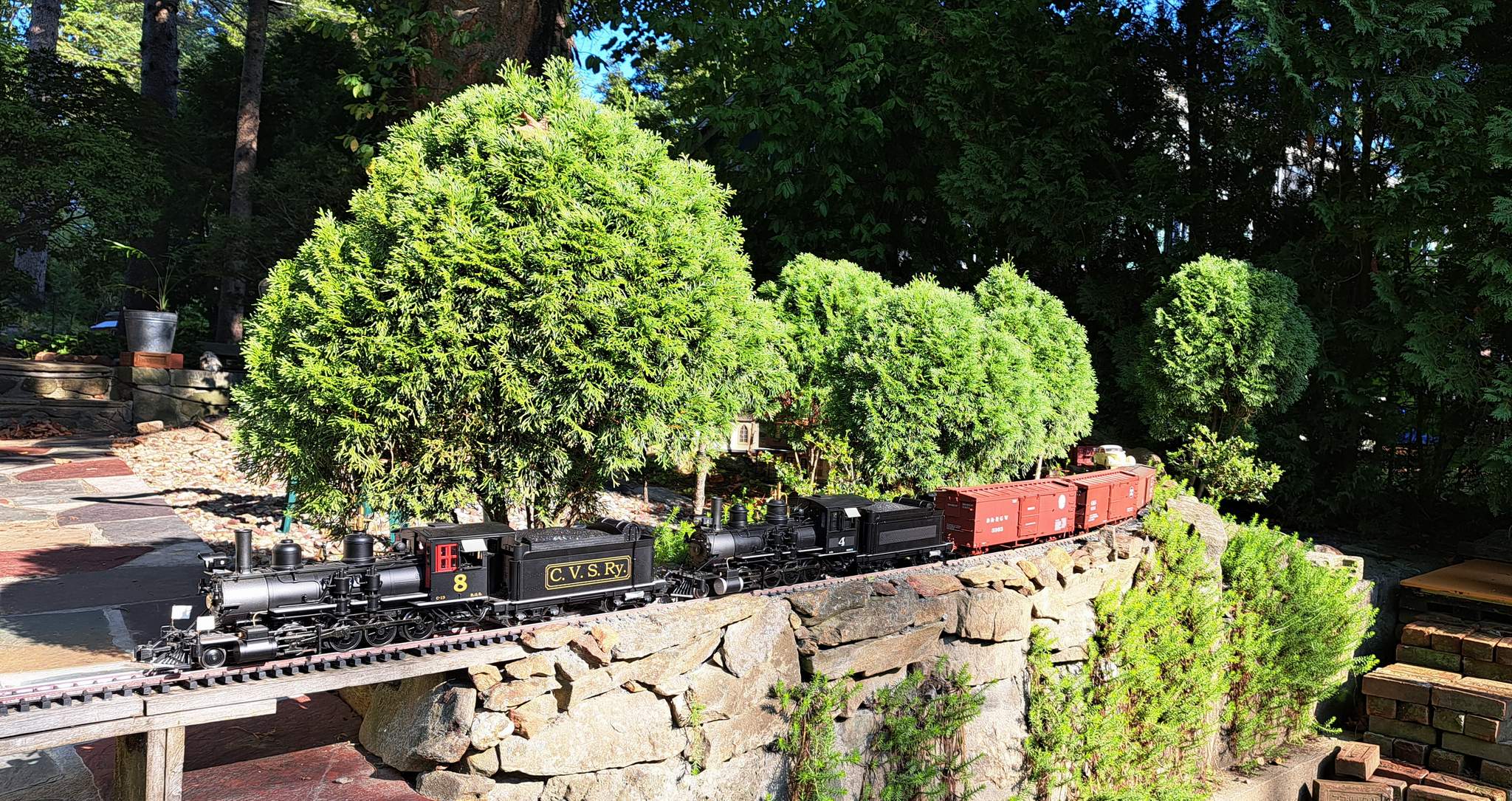 As a final test, Number 345 was added making it a triple header… 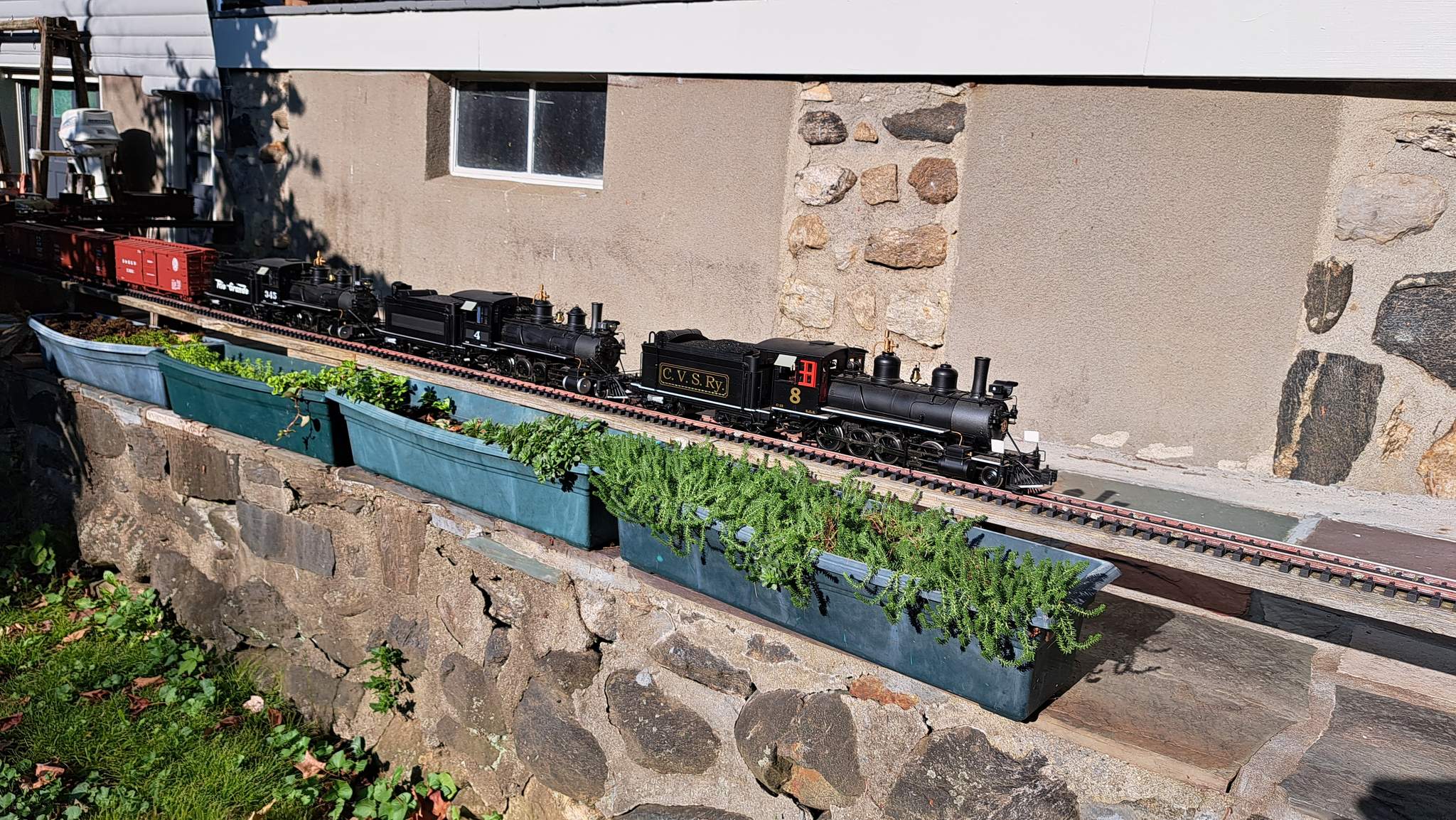 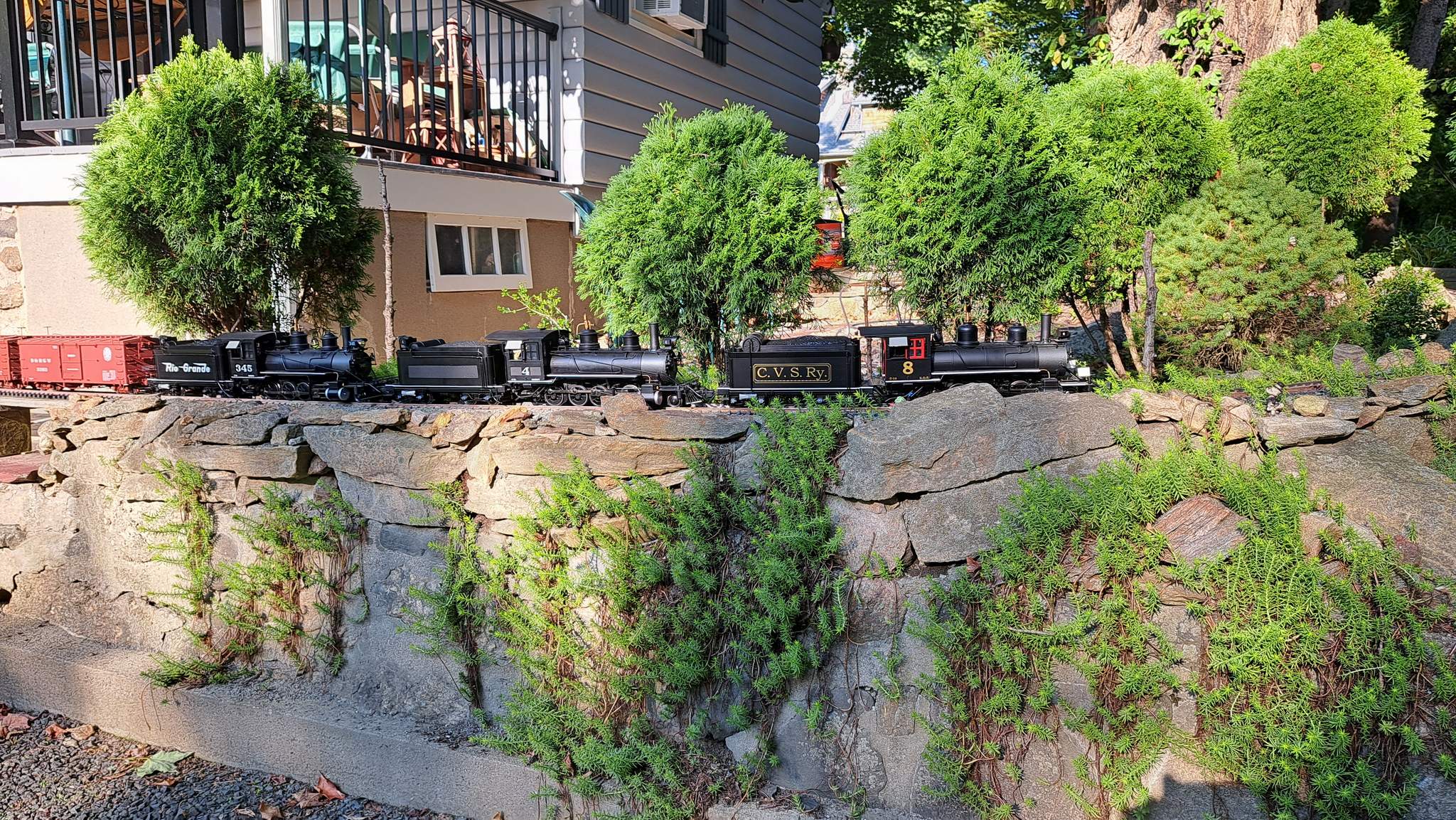 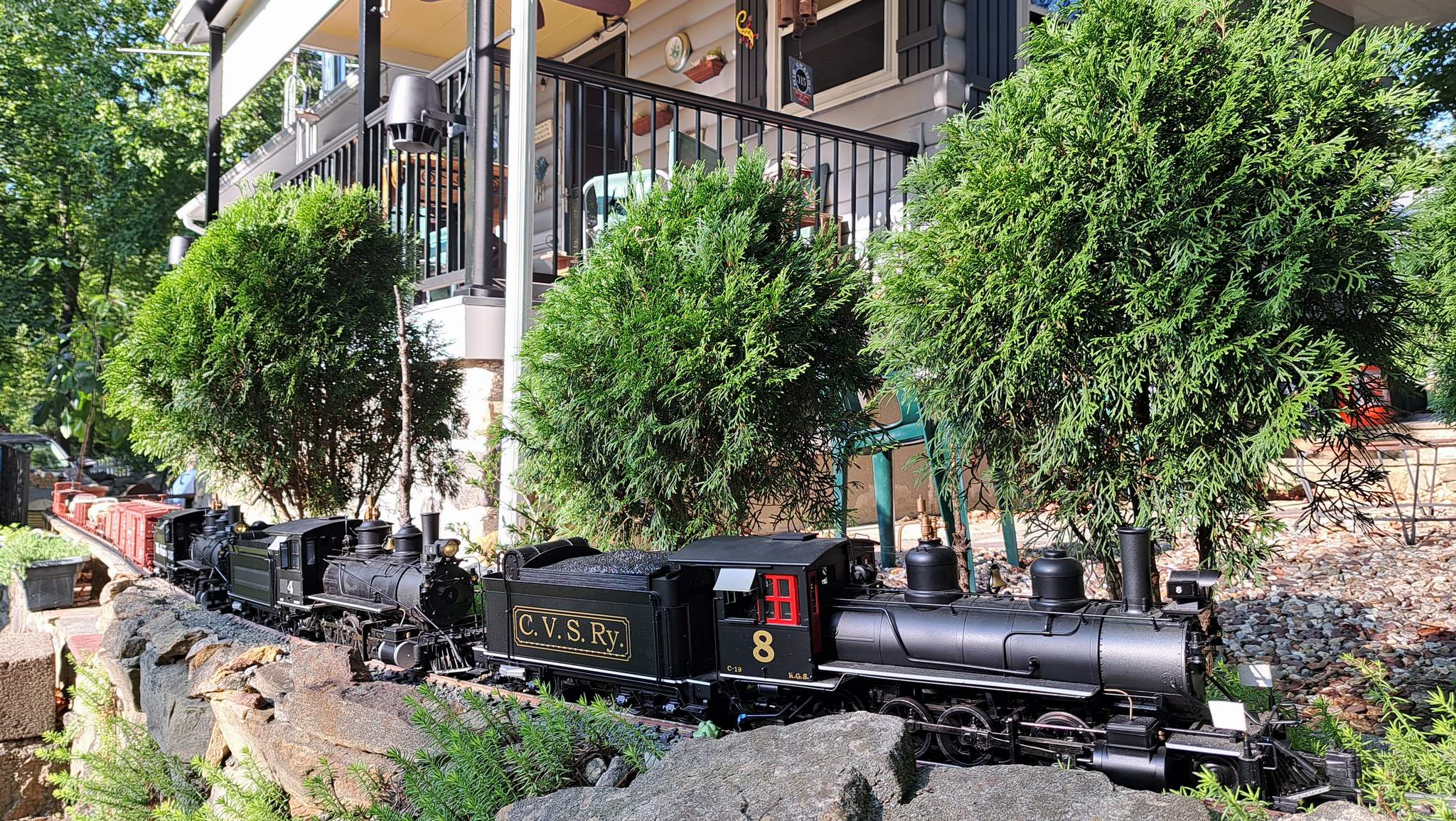 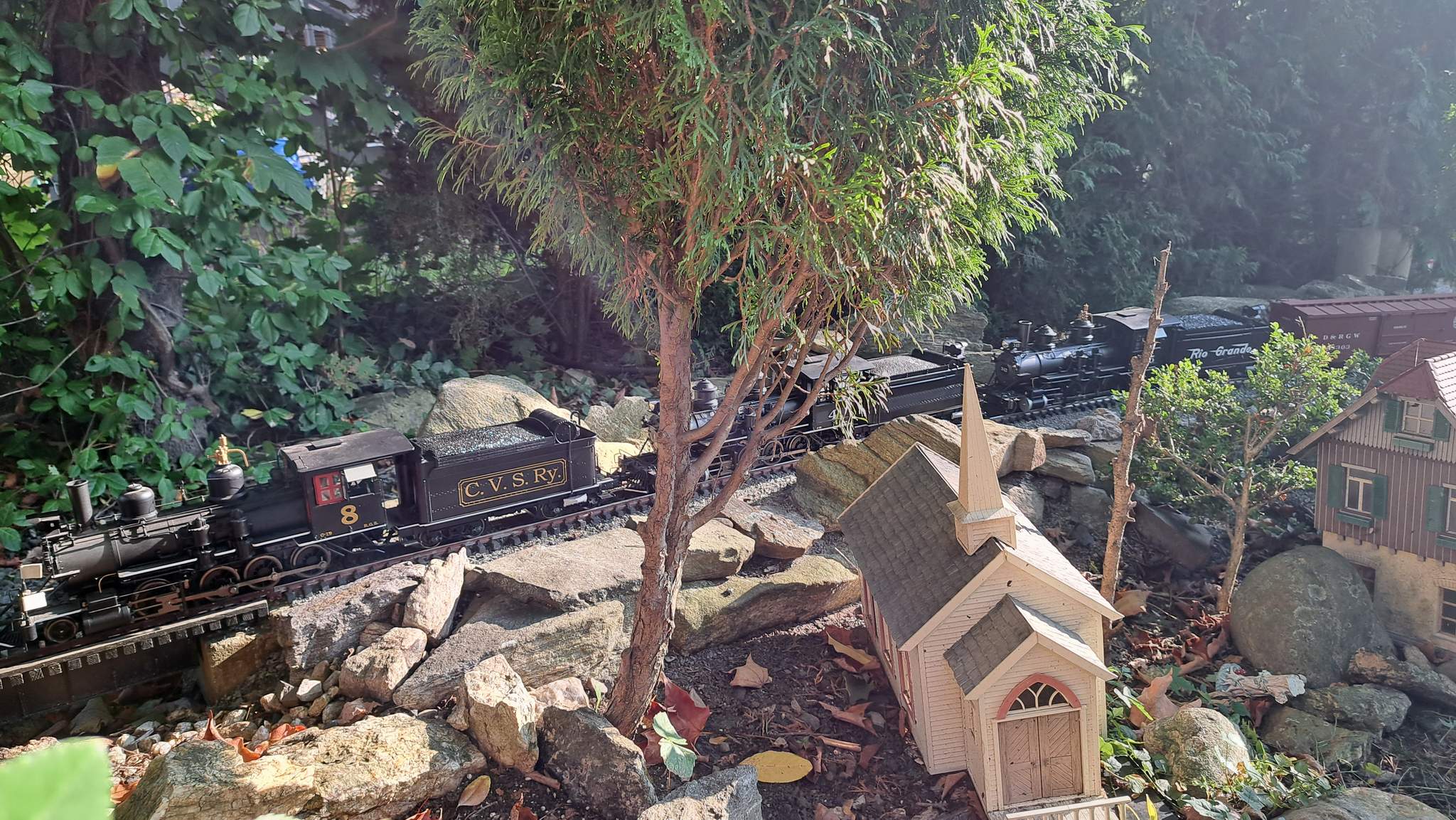 This added a little more complexity to the move around the wye. Here No. 8 is about to pass the turned train to get back in the lead… 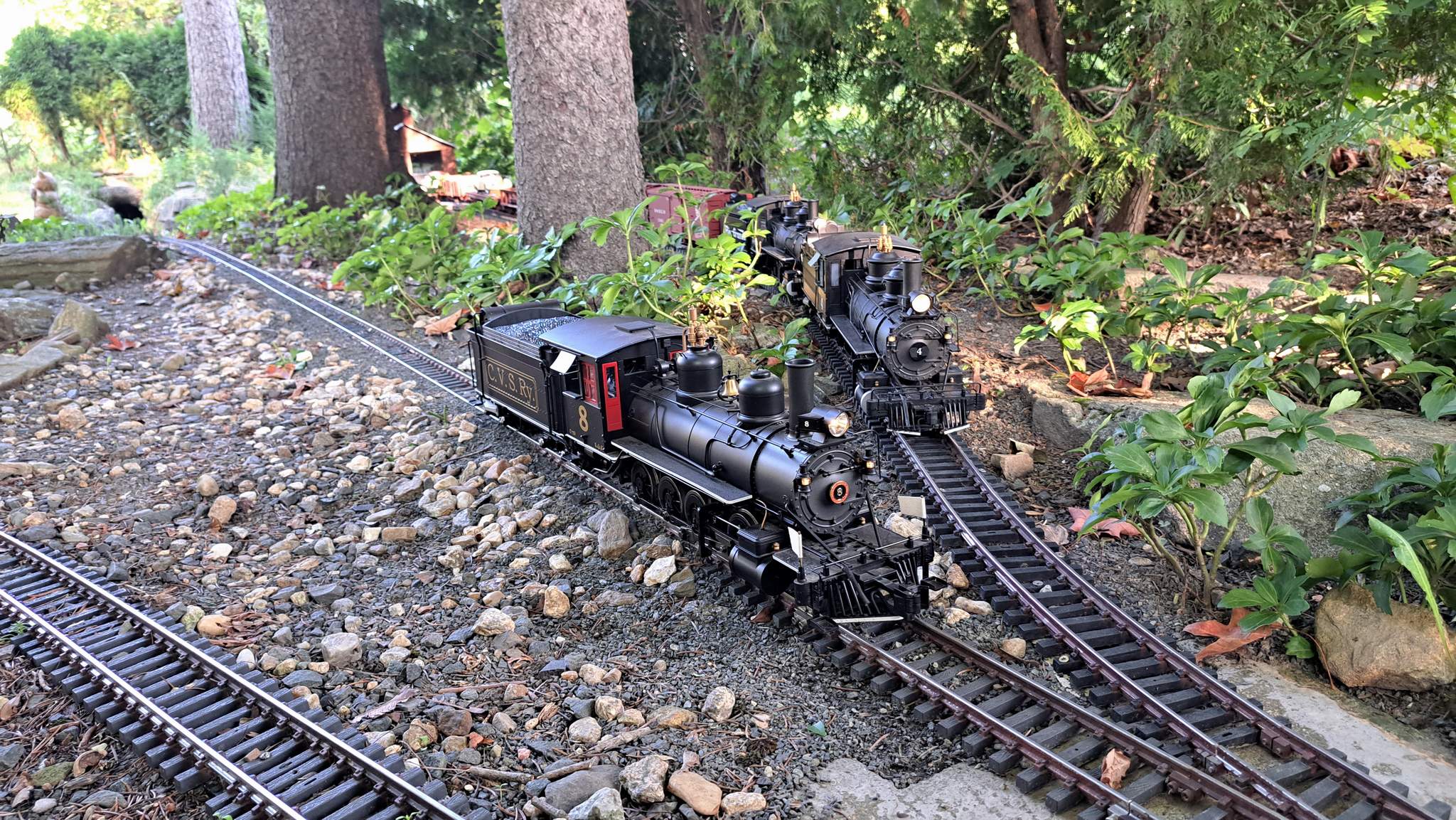 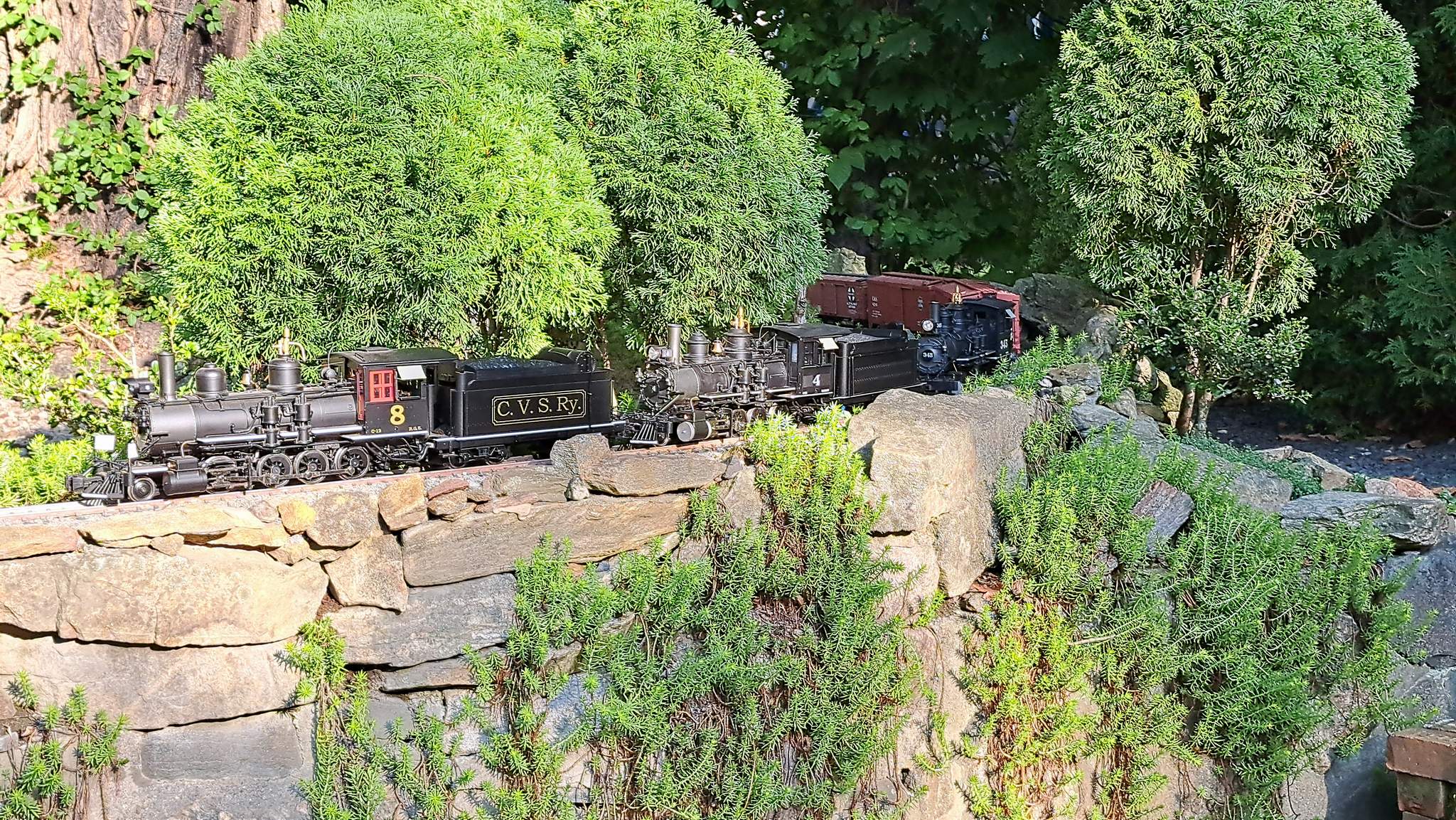 The scene above was captured on video and posted to Vimeo…

Number 4 still needs coupler work to try and correct some of Ken’s modifications, but the drive issues seem to be all but gone. After looking at the pictures I think I will completely cover the old number on the cab and cut a new number 4 to go over a matte background. For the tender I’ll probably do a repaint unless adding the railroad name helps make the black patch blend in. Maybe a matte clear over everything once lettered will do it.

Looks like a great time. Glad to hear that #4 is running smooth.

Remind me to never show my wiring of any of my RailPro installs, they work, but could never win a beauty contest. Nice work and it looks good as it is!!!

Thanks Pete. There are drawbacks to tight wiring, especially if you can’t test every step along the way. Once things are all covered with heat shrink and bundled with ties it can be a real bear to find a problem. On the other hand, it’s nice not to fight unruly wires when closing up.

I wasn’t too happy with the switch/pilot lamp mount compared to my other two, but I didn’t have the wide brass flat bar in stock, so I improvised with what I had on hand. It works, which is really all that matters.

Great weather for running trains today. We had planned on going out in the boat, but it was a bit too chilly. Number Four pulled several revenue trains today. Seen here about to take the main at Indian Hill Junction while Number Eight holds on the main with a coal drag and Number Three sits in the hole with a passenger train. 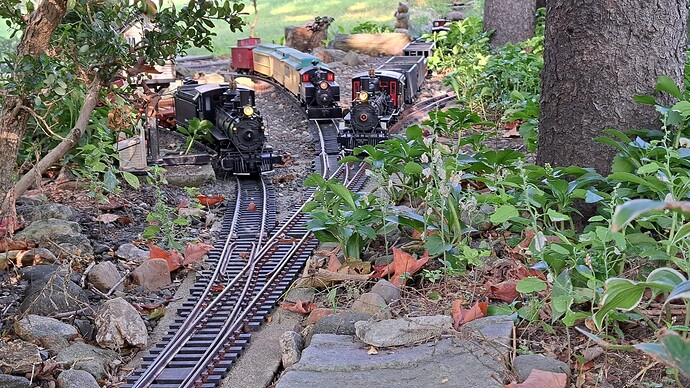 That is a good locomotive, Jon. I always thought I would end up with three of them, but never purchased one…I get the feeling that they were the best Steam type locomotives produced by Bachman.
A bit of history; I think Ken brought that one up to Ottawa on his last trip, so its wheels have been on the IPP&W at least once in its life.
Enjoy…
Fred

As road trials continue I’ve discovered that the drive in #4 is definitively not as smooth as #8 and #345. It shows signs of lots of run time, especially on the cross head guides where the plating has been worn off. And looking at the blind drivers, I think Ken did the mod to have them contact the rail. The stock version has them hover just over the rail head, about enough to slip a piece of paper in.

It really is a bit odd. At very little throttle, it will crawl nice and smooth on level track, but to increase the speed requires a lot of throttle, going from around 5% to over 25%. I don’t think the drive is binding because I don’t see any spikes in motor current. I thought it might be a slipping gear, but it pulls strong once moving. I lubed everything up when the loco arrived and got cleaned it up. I’ve re-lubed the cross heads and side rods since.

I guess I really won’t know until I get it one the bench and open up the drive. That probably won’t be very soon.