Anyone running a butane-fired live steam loco is aware of the issues with gas sources and can adaptors. I recently had an adapter fail so I did another round of ordering parts and making some more. I thought it might be of interest.

The least expensive source of butane is the gas canisters sold at Asian or Korean groceries. These are advertised at Walmart. 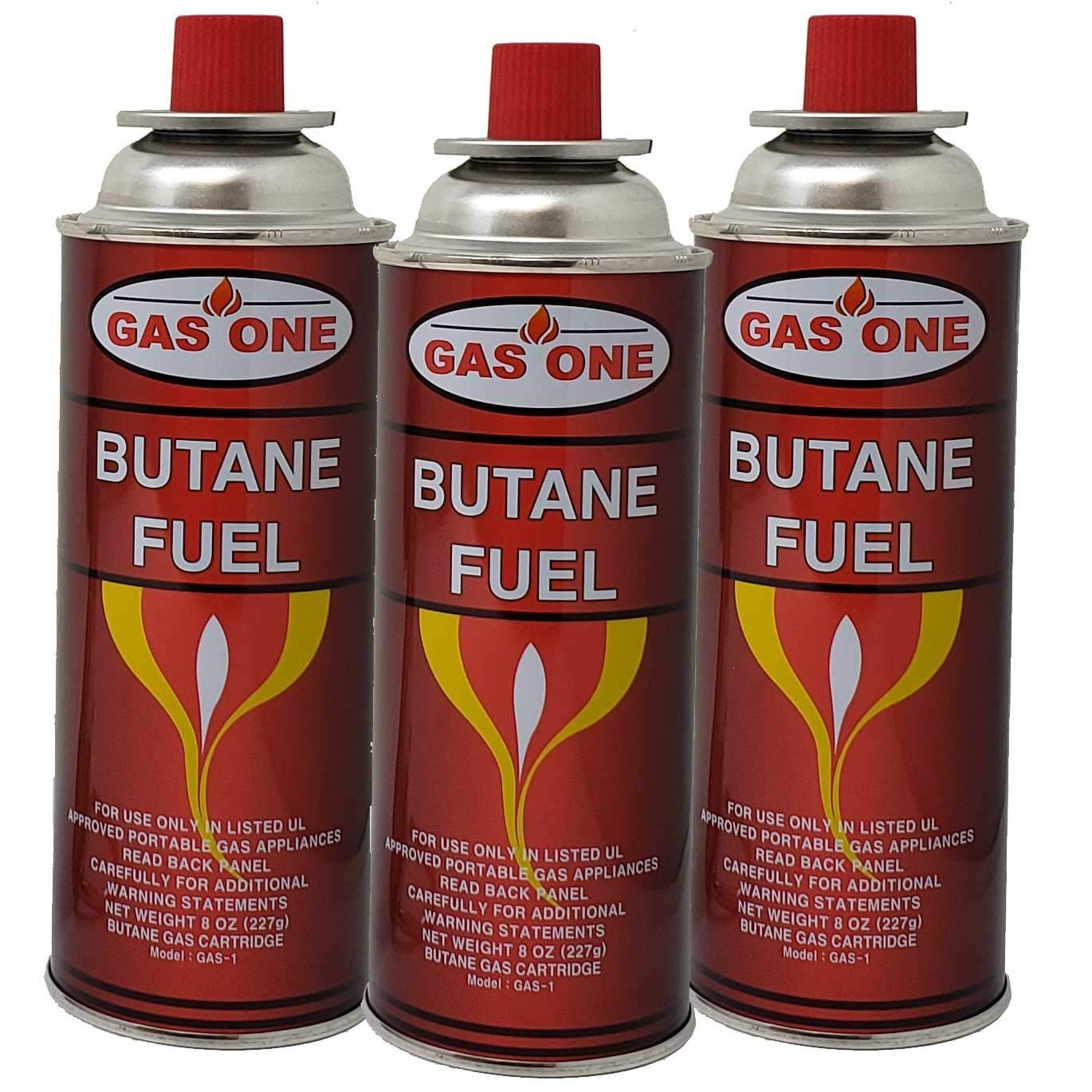 I pay about $5 for a 4-pack. They are used in small counter-top stoves and have a pickup tube inside that is biased to one side - more on that later.

When I got home from my recent vacation, there were many small packages in the pile of mail. Here’s what I bought: All of these are sold for camping use, on the small propane stoves. Their idea is to use cheap butane instead of ‘camping gaz’ (iso-propane, a mixture of butane and propane.)

There are two pieces of each adapter, sometimes three. One fits on the gas can to make it look like a propane tank. The other screws on a propane tank to adapt it to filling a gas cigarette lighter. [First time I bought some, they were sold as ‘Dunhill Lighter’ adaptors. Not today - guess dunhill lighters are defunct.]

Here’s the basic components. On the left is a can adaptor with a threaded outer end. On the right is a ‘gas lighter’ adapter. The important feature of the latter is that it incorporates a valve, so the gas flows only when you press it on the loco’s gas valve.

This pair is actually my original adapter which failed. There is a tiny O-ring inside the can adapter that fits and seals over the can nozzle. It has disappeared and doesn’t seal these days.

So on to the new ones. On the left is an “Optimus Refill Adapter” which I acquired from Summit Hut [ www.summithut.com ] for $6.99. As you may note on my first photo, it comes with a lanyard, but it is easily removable. On the right is my Dunhill adaptor, now sold as a “Soto Fill Adapter” by Back country gear [ http://www.backcountrygear.com/ ] for $12.95. It comes with a loop that is also easily removed.

Another type of can adaptor is available, so I bought one for $2.59 from aliexpress.com (all the rest of the stuff came from Aliexpress, except the piezo lighter which I am still experimenting with.)

These twist onto the can: 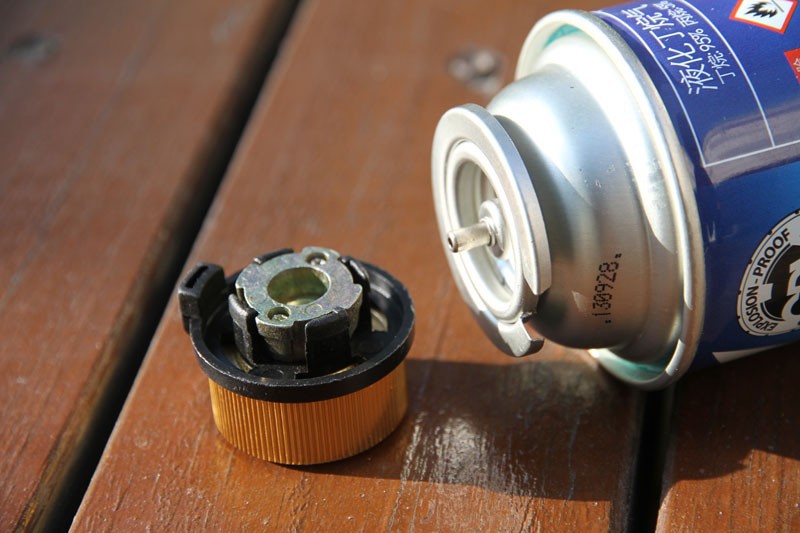 Here’s the third version. Sometimes you can’t get the big can tip into the cab of the loco, so you need something longer or flexible. I have an Accucraft ‘gas adapter’ tube on a flexible hose from one of the legged adapters, and I was looking for something more robust.

Not sure which stove this works with, but the other end has a manual valve and attaches to the can adapter. This cost $5.80 from aliexpress with the valve but not the can adapter. The tip is recessed, and seems to fit over our Ronson filler valves. I had thought I’d need to make something, but it seems not. Using these is trickier than just having a longer fill tube (which would be easy to make to fit the ‘lighter’ adaptor.) I’ve got used to it - you tuck the can under your arm and hold the pipe on the filler (see below.) The other hand turns the gas on and then steadies the loco while you fill. Finally - I said I would get around to it - there’s the question of the can position. The ‘feet’ on the plate-type adapter are designed so the can sits on the ground horizontal with the feed tube at the bottom. See following photo which shows the internals of the can. Note the big cut-out in the lid is in the same position as the fill tube - so keep that at the lowest point. 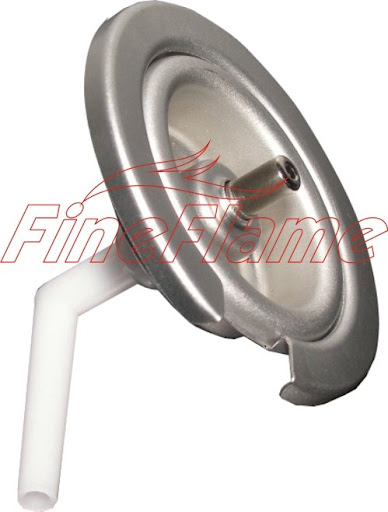 Good stuff Pete. Good to now other options are out there. Looking forward to seeing the rest. You should do something for SITG.

Good stuff Pete. Good to now other options are out there. Looking forward to seeing the rest. You should do something for SITG.

There’s a recent thread on MLS that is worth reading, to see how others have done the same job.

I took the gear to Jack’s place and ran Chaloner in the warm Florida sunshine. Just thought you’d like to know the piezo igniter shown in my second photo does work to light the gas.

I think the best option for us is to keep the can upright if possible. The recommendation to put the notch in the can down seems to contradict the warnings from other users. Read this warning blog about keeping the notch UP : Butane Adaptor Warning It seems that with the notch down the feeder tube will expel liquid butane and not the vapor.

Russ, when transferring, rather than burning directly from the can you want the liquid, not the gas.

Yea, you want the gas when feeding a burner, but you want the liquid when filling another tank. Different needs for different applications.

Thanks for this Pete. Great info. Next time I’m down to Pittsburgh, I’m going to visit the Asian store in the strip. I’ve been paying a lot more than I should for it from the few stores that I can still find it in. Just waiting for the snow to clear so I can begin surveying for the new layout.

You can also buy those canisters on-line from Amazon shipped 12 for $22. Brand is GasOne. I used to get from King Butane but they no longer stock it.

Cabela’s stores used to have it. I have a lot, so have not looked for a year or two.

Russ, when transferring, rather than burning directly from the can you want the liquid, not the gas.

Excellent to know! Heck, I use it upside down anyway… Just don’t want to burst into flame.

I think the best option for us is to keep the can upright if possible. The recommendation to put the notch in the can down seems to contradict the warnings from other users. Read this warning blog about keeping the notch UP : Butane Adaptor Warning It seems that with the notch down the feeder tube will expel liquid butane and not the vapor.

Russ, as the guys pointed out, we want to transfer the liquid into our loco tanks. But thank you for that thread - I had read it before but lost it and I wanted to confirm the angle issue. You’ll note several of the adapters have legs, so the can can’t roll over.

The flare up issue is real when you have filled the tank of a live steamer. [See Russ’ link above.] You will frequently get liquid butane feeding through the gas jet and it will burn/flare just like the photos in Russ’ link. Shut it down immediately before you singe the paint.

If it happens, I sometimes turn on the gas and listen until it sounds like gas not liquid. Doesn’t always work - it depends on the loco. All you can do is keep trying until you get a proper flame in the flue.

Not to change the subject, but I feel it is relevant, and I know that’s a Regner in the first post. I’m new to live steam, and still waiting on a Henry kit, but I noticed on MLS, there were a few guys having issues with the Regner gas valves. Do I need to order a special gas valve for the Henry so I can use the fuel delivery items listed above?

Do I need to order a special gas valve for the Henry so I can use the fuel delivery items listed above?

In a word - Yes. Regner valves are weird and do not work (I’m told) with fillers geared to Ronson valves (all the above stuff.) Talk to Jason (if that’s who is providing your Henry.) He may be drilling out the Regner valves and fitting Ronsons.

If not, Graham at Gardenrailways.co.ok sells a modified valve with the Ronson valve already fitted.

Yes, it is Jason, and I’ll remember to ask him, thanks Pete!

Yes, it is Jason, and I’ll remember to ask him, thanks Pete!

Tom reported on MLS that Jason sells the modified Regner/Ronson fillers for $20.

[Edit] I was asked about an old pic of my gas filler rig, and found all the photos in this had disappeared when I accidentally deleted my 2017 directory. I put most of them back.
I added this to finish off the story

I should point out that using the hose ‘as is’ doesn’t work too well. I cut off the end and now use it with the Accucraft gas filler tube.
https://www.accucraftestore.com/product-page/ap-29204-gas-adapter-of-fuel-extender

I found the tube inside the metal casing was ordinary plastic, and I use a motorbike fuel pipe clamp to hold the Accucraft tube in place.

I just use a gas filler valve from Wee Bee Loco works that screws onto the mix gas fuel from Walmart. Living in Indiana, its just simplier to run the propane/butane mix year round and only have one type of fuel adapter nozzle. Our local Walmart stocks the mix fuel in two sizes, a $5 can and a taller $10 can. Works great in every gas fired model that I and my friend Steve has, from a vintage Merlin Mayflower, Pearse, Roundhouse, Accucraft and my Bowande gauge one engine. Just my 2 cents. Mikie