Hi all, For a while, several years, I have had plans to install a bridge or bridges from the layout to a new area. There had been no real rush in the past to complete this but last Spring the “new area”, the Humboldt yards, was completed but left isolated from the rest of the layout. It was/is time to do something about the situation. The gap to be spanned is 12’-6" and the bridge deck height is about 5’ in the center. I spent a lot of time trying to figure out what type of bridges I wanted to use to span this area. At first I was set on using deck girder spans but the more I thought about it they seemed kind of plain for such a long (at eye level) span. Finally I did some cardboard mock-ups of different spans and sifted it down to either a through truss or an arch style bridge. here is a picture of the gap to be spanned and the card mock-ups to give you a feel for the area. A through truss silhouette is on the right and an arch on the left. Each span will be 6 foot with a removable pier in the center. 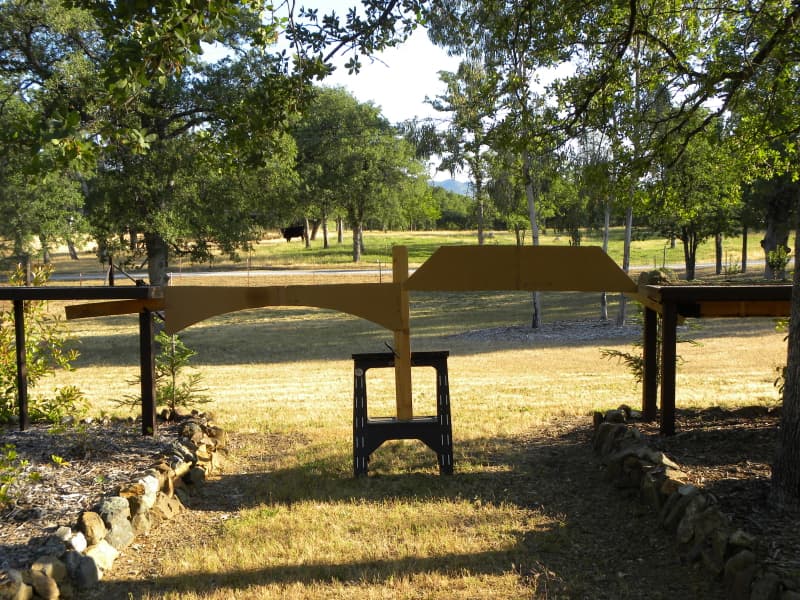 After a lot of thought and consulting with quite a few others the arch style was chosen. Now where to find the bridges or how do I build an arch style, or what material to use? As luck would have it, about the time I started looking fellow lister Gary Armistead posted pictures of some arch bridges he was having made by Scott Lindsay of J&S Railcar. ( link http://www.jsrailcar.com/ ) I contacted Scott and we worked out the kinks, as the bridges I wanted were longer and wider than he normally produced. He made up a set of drawings for my approval, gave me a price and my bridges were on their way to becoming a reality. A month or so later a wooden crate arrived from Tennessee with the bridges. These bridges are laser cut from 1/4 inch black ABS plastic and glue together so they shipped in the flat in a crate 74 " by 16" by 2" and arrived in perfect condition. 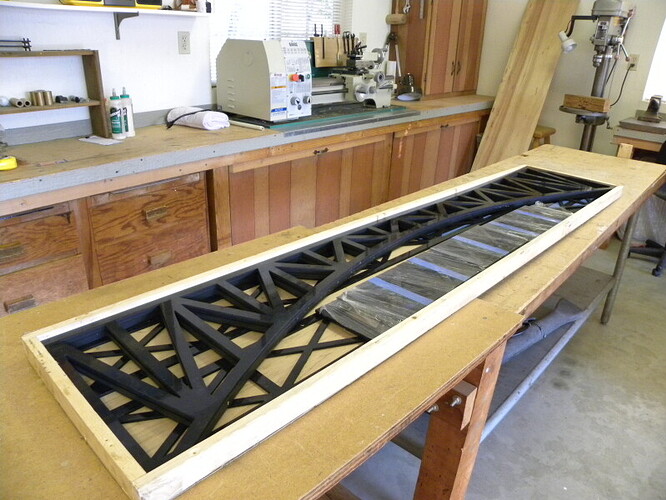 The pieces sorted and checked for size and location. 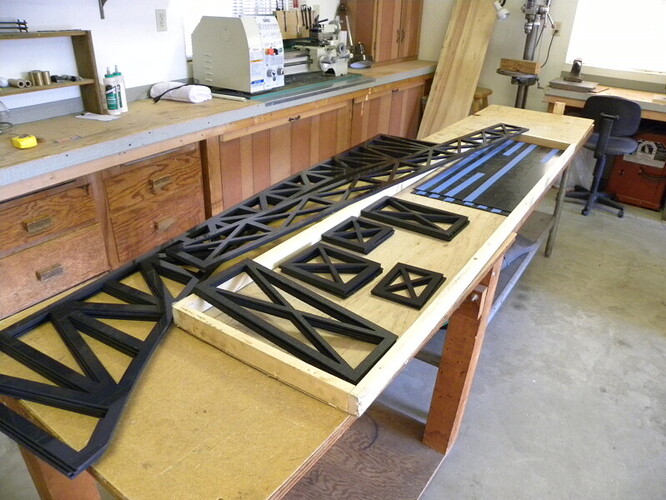 The rivet plates come pre-cut and the rivet holes located. After looking at these for a while it finally dawned on me that they are laid out and cut on the sheet from left to right just exactly in the order that the go on the bridge. should make assembly a cinch. 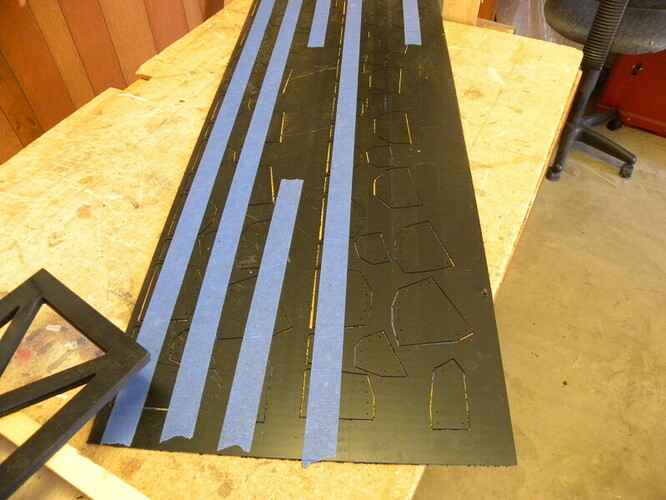 Will report on the assembly.
Rick

Thats a great. Nice the way it comes packed.

That will be some bridge combo!

BTW I also really like your nice, clean workshop!

It would take me a year to clean mine up. Oh ya, I haven’t cleaned it up in years!

Hi all, I got started on gluing up the bridge components and found that it is a very straight forward job. The pieces had a few small burrs and fuzz along the edges but it only took a few minutes with a piece of sandpaper to knock them off. I clamped a piece of 2X6, after running the edge through the planer, to the bench to use as a straight edge backer then laid waxpaper along the edge so the glue wouldn’t stick to the bench and the 2X6. I clamped one side to the bench so I wouldn’t get any movement during assembly and started gluing. A short piece of 4X4 block worked really well to help square up the cross members. 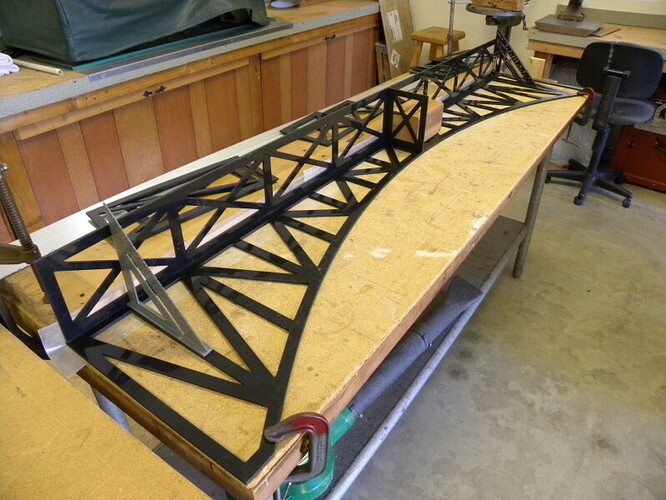 Here the top deck is glued to one side and all the cross supports are glued in place. The sheet material comes with one side smooth and shiny and the other with an orange peel stipple no sheen finish. I set it up for the stipple finish to be on the outside. 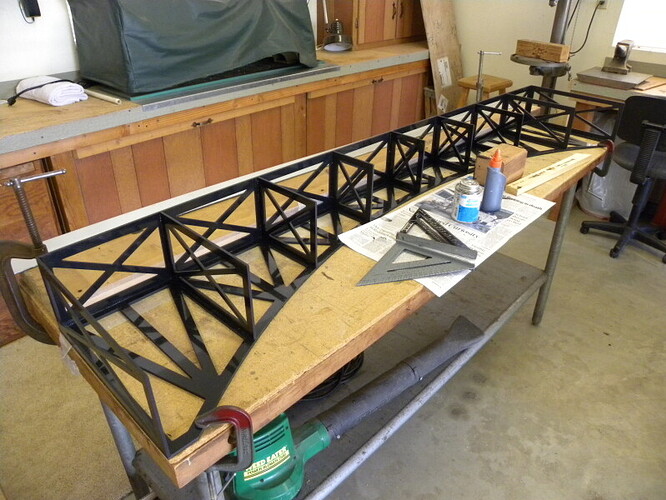 You use standard ABS plumbing pipe cement (black) that is available almost anywhere. Scott suggested to get a cheap bottle of “Elmer’s Glue” and pour it out and fill with the ABS cement so that you use the squeeze bottle to apply the cement. Works really well. Be sure to have good ventilation, the fumes are really bad!!! 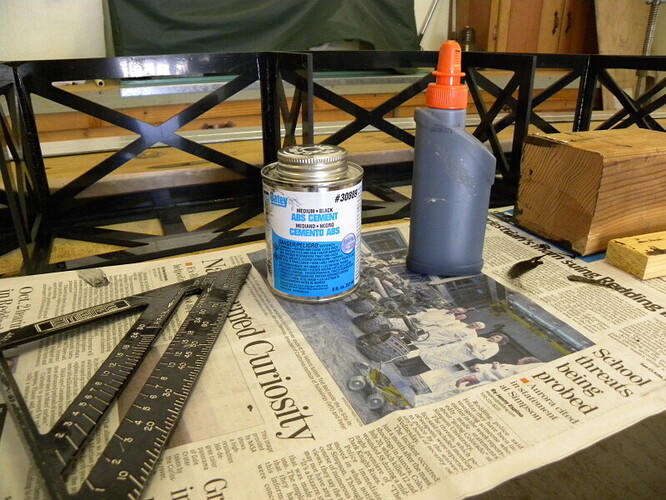 Gluing on the second side. I only glued half at one time as that seemed to be about as much as I wanted to attempt to place and keep square and true and clamp before the cement started to set. The cement sets rapidly but I found that if you use a little extra it sets up slower and you have time to wipe the slobber off after getting everything in place. 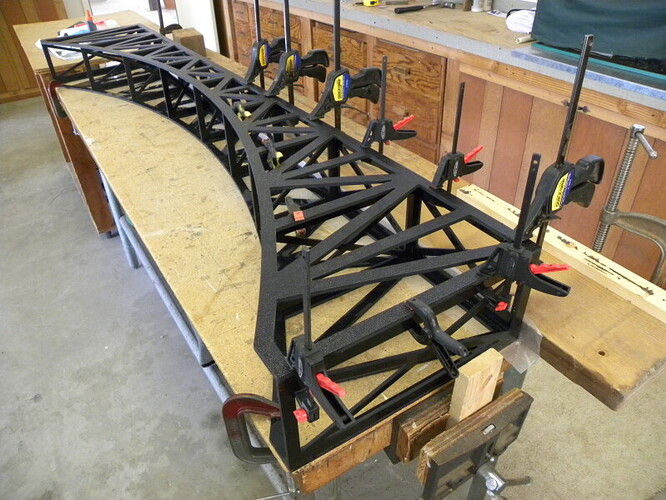 What a great looking bridge. I would imagine being of ABS that it’s a bit more affordable than a steel one too unless you did your own welding.

Lookin’ great Rick! I told you could never have too many clamps to do the assembly. Sounds like it went well for you with the assembly. The bridges really finish off nicely with the addition of all the gussets. I bought one of those General de-burring tools to remove the small burrs on the pieces. Scott makes some nice bridges.

Anxious to see them installed now.

A little more progress on the bridges. The glue assembly is complete so I slapped a piece of track on top and set a car on it to see what it would look like. I like it, now to glue up the other one. 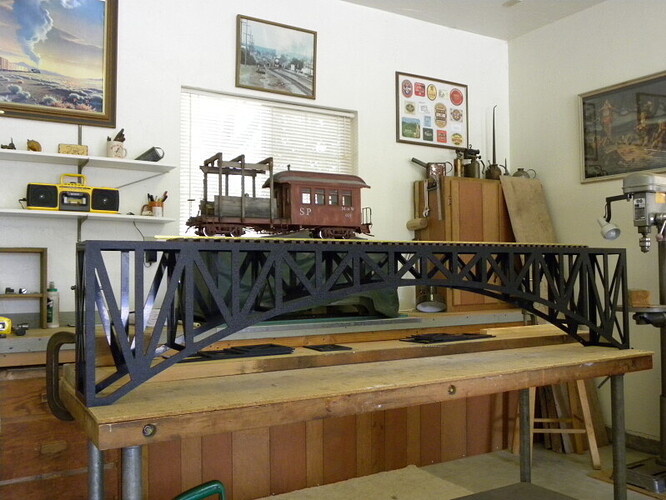 Gluing the rivet plates in place, they really dress up the structure. 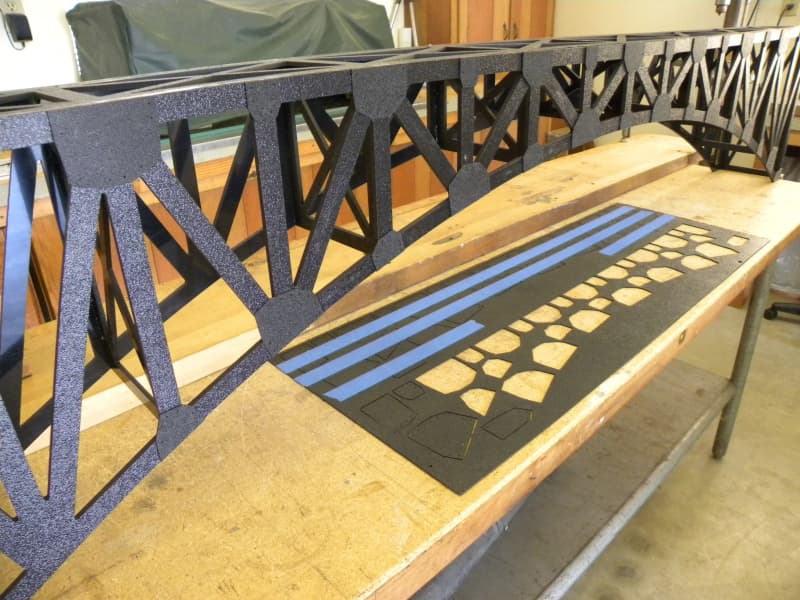 Inserting the rivets, well actually, brass brads with round heads. Each hole has to be drilled, the brad press fit, then cut off on the inside. Not that I am counting rivets understand but there is like 740 of these buggers to do. 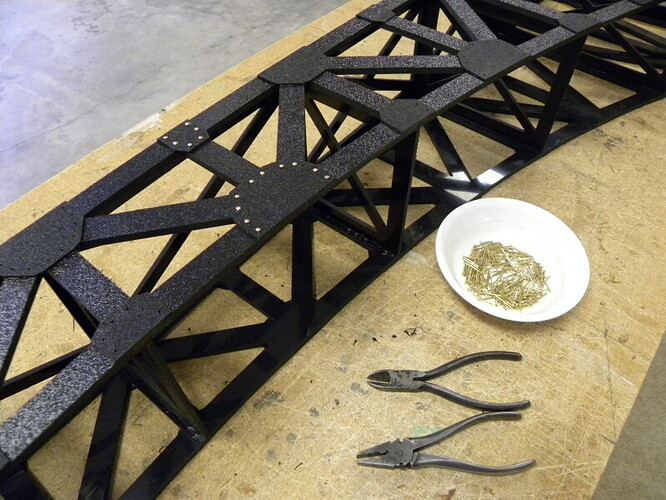 All riveting done and the bridges primed and ready for paint. 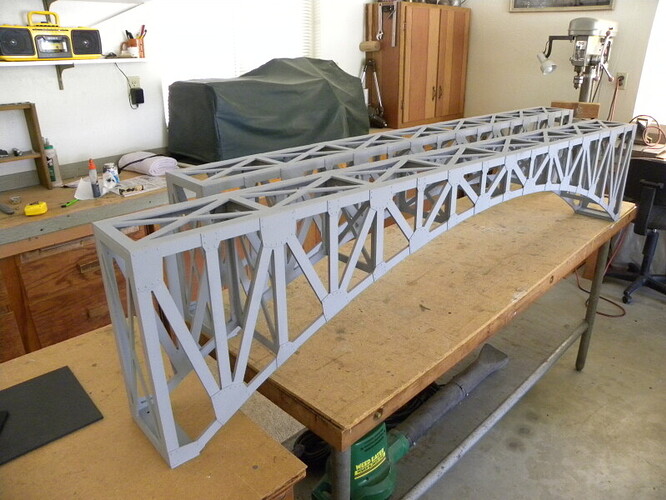 Thanks for taking a look.
Rick

That is/will be some bridge.

Dang Rick, you’re more ambitious than I am. I put the gussets on my four arch bridges, but did not do the rivit thing. 3200 rivits to do on mine! After seeing how nice yours look, I will rethink the rivit detail and start to work. They look great! Nice work, buddy.

That looks great. I’m curious how sturdy those bridges are. I’m guessing they would need to be painted for UV, but for the price, they look good. I wonder if he does custom sizes?

That does look really great. The rivets are a terrific addition and worth the extra work

Bob McCown said:
That looks great. I'm curious how sturdy those bridges are. I'm guessing they would need to be painted for UV, but for the price, they look good. I wonder if he does custom sizes?

I have built quite a few of Scott's bridges....four, 48 inch arches and about 12-14 deck bridges, some custom made for a curve (90 inch radius)including faux "steel" piers. ABS does NOT need to be painted for UV protection. PVC DOES need to be painted. These bridges are very strong. Scott will do just about ANY bridge you can imagine. He uses AutoCad and his router in numerically controlled.

I thought his prices were great. I paid $100 for each 48 inch bridge, including the custom gussets.

I don’t have any affiliation with Scott, other than being a happy customer.

Maybe it’ll be a wet winter Gary and you’ll have lots of time indoors to do those rivets!