BIRTH OF A 3 TRUCKER

November 2021. Well this build thread is back together after several years of missing pictures. It wasn’t difficult to do but took a lot of time, hope someone looks at it.

Hi all, A new project underway.

The donar for this project is a first generation “Ely Thomas” unlettered 2 trucker that has been sitting on the shelf since 1999. I originally bought it with this project in mind I just didn’t realize that it would take 14 years for it to happen. 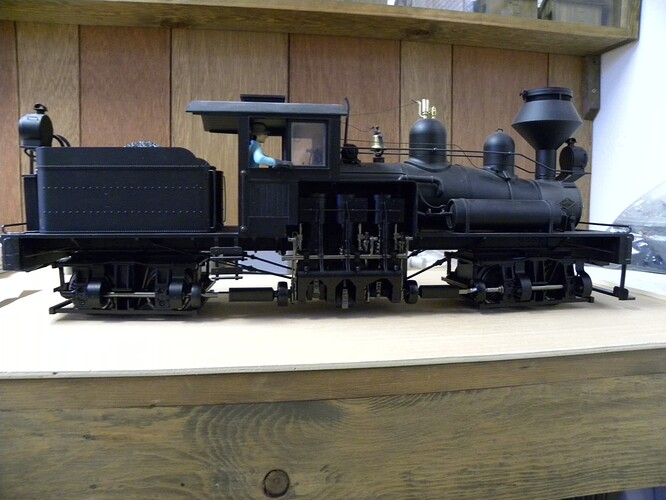 When Bachmann introduced the new metal replacement trucks at $99 per set I bought a set for each of my Shay’s and put them away for when they would be needed. Glad I did based on current pricing. So the front and middle truck on the new engine will be the upgraded version and the rear truck will be an original from the 2 trucker. It seems in good shape and I removed the drive gear from each axle so that it is free rolling but still has all the weight supplied by the motor and gear box.

Back in the day when the 2 trucker was first introduced Don Niday of “Iron Creek Shops” produced a 3 truck conversion kit to use on these 2 truckers. I was always going to buy one but never got a round-to-it. When Bachmann introduced their 3 trucker it pretty well killed off Don’s business for his conversion kits. Don does have some spare parts left for this conversion but luckily I ran across an almost complete kit in unused condition from another vendor and was able to obtain it. As you can see by the picture it saved me quite a lot of scratch building. The water bunker and car platform as well as the fuel bunker and the water siphon pipe were the principal parts included. 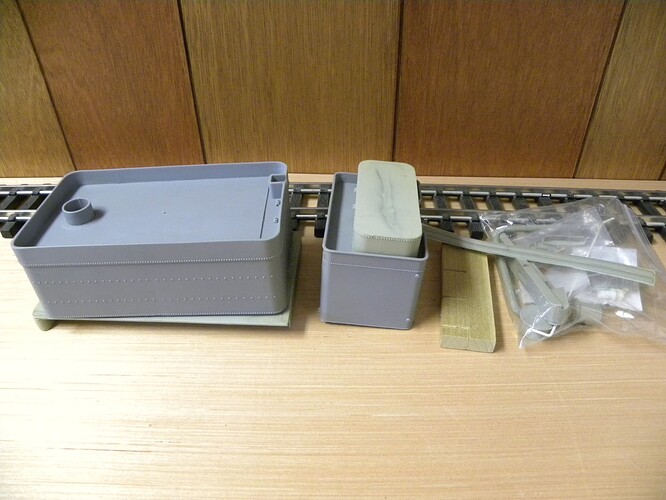 Some of the parts I have been able to collect over the years for this build. I considered using the Banta wood cab kit but decided it was not right for this project. Unfortunately I have not been able to find things like the generator or the cross compound air pump so they will have to be scratched.

Some of the research material for this project. I am basing this new model on the Westside Lumber Company’s #15, it will be close ,hopefully, but of course not a perfect match. 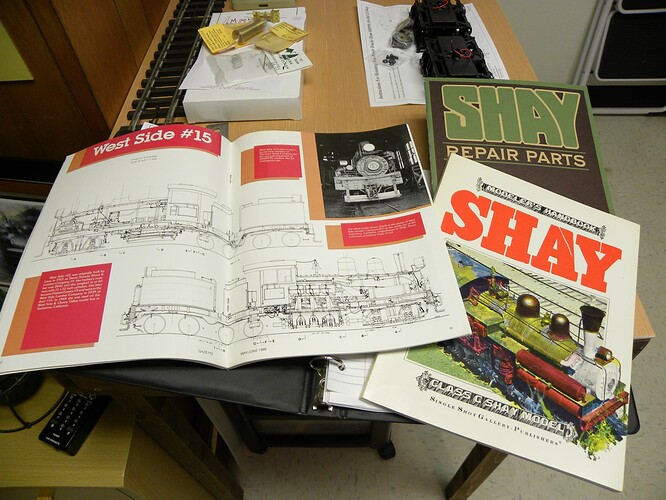 Thanks for taking a look

Looking good! BTW, Trackside has three generators shown: Pyle National, Nathan and a Sunbeam (early model). He also shows quite a few pumps. Might be worth a look. Knowing your talent and skills, you have probably looked at these.

Check Precision Scale for the cross compound pump. I’m pretty sure that’s where a friend of mine who needed one for a project found a source. If they don’t, let me know and I’ll bend his ear about where he found his.

I like where this is going Rick! I have a 3 trucker waiting a date with the saw. It will either become Westside lumber #9 or #15. I look forward to the progress.

Thanks for the input, unfortunately neither of these companies produce a generator or pump that I can use. Accucraft makes a cross compound Westinghouse pump but it is like $70, a little steep I thought, though it is probably a good one.

Speaking of dates with the saw, check out the following.

Progress on the build.

One good thing about finding the Iron Creek Shops kit was that it included a set of instructions for disecting the 2 trucker. This is the first time the old Radial Arm Saw has been used in years but it was the perfect tool for this project. 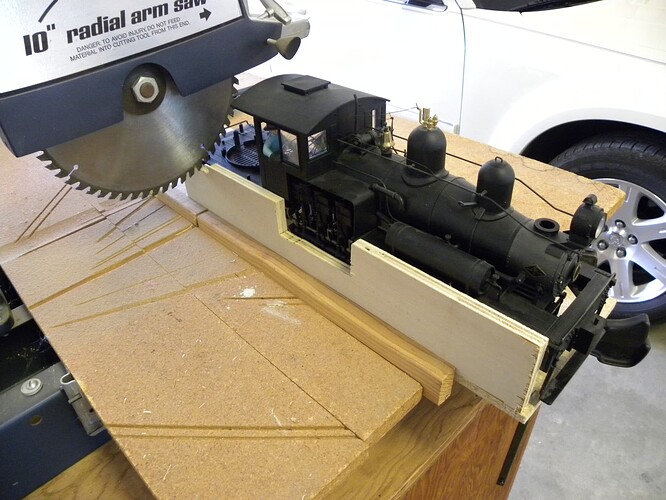 As you can see I had to build a special holding jig to mount the Shay to the table to hold everything straight,square and level.

OK, everything clamped down and checked and re-checked a dozen times, once I pull that saw blade forward there is no turning back or changing of mind or fixing it if I measured wrong. No pressure though. 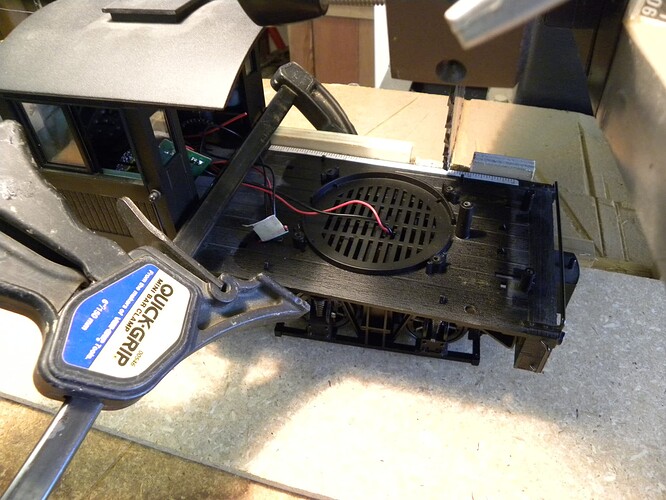 The deed is done and thankfully it was done correctly. I had to leave the old truck under the back of the Shay so everything would sit level for the cut. There is less than an eighth of an inch of clearence between the frame bottom and the truck top just to make it interesting for cut depth. The saw blade made a beautiful smooth cut through the plastic as well as the aluminum frame rails. I should have taped up the top of the truck/motor block before cutting, when I dissambled the truck to remove the drive gears I got to spend an hour or so cleaning plastic and aluminum chips out of the greasy gears. 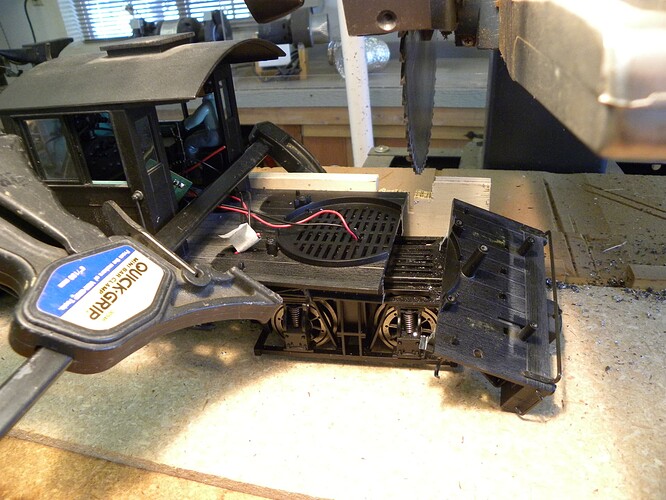 That’s it for now.

Dang…most guys just use a Dremel…

Takes a set of stones to cut a valuable model like that…Fun ain’t it!

Dang…most guys just use a Dremel…

Lookin good so far Rick. btw, I think I have a double compound compressor in my parts drawer that you could use if you are still searching.

WOW! I have cut up several Shays at this point…but I generally use a razor saw…Do you have the sliding sleeve and knuckle for the rear end of the middle truck?

Thanks much but I have decided to scratch it, in fact already have a start on the part.

I do now that is covered in the next update.

Hmmmmm… don’t force it, just get a bigger hammer.

I love to see a plan come together, especially with BIG TOOLS. Looking forward to your build Rick.

Hi everybody, a little progress update.

The drive shaft for the third truck has to be connected to the second truck drive shaft. I know that probably sounds obvious but if you don’t know how these Bachmann Shay models are driven it can get a little confusing. The three cylinder engine and all the side gearing in all three trucks are driven from one axle on the front truck. This is all independent of the motors in the trucks driving the locomotive.

I have quite a number of old style trucks in the junk box from doing changeouts for club members on their Shay’s so have plenty of “spare” parts to work with. The first step was to turn down a shaft and shorten it for connection at the #2 truck. 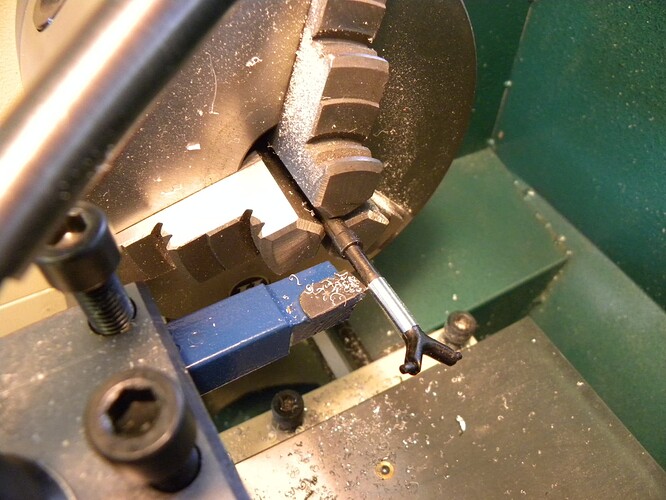 Next was turning another one down to make a connection at the #3 truck that would accept the square slip sleeve. The sleeve was constructed from square brass tubing and lined with styrene to get a snug fit on the square shaft of the drive line. 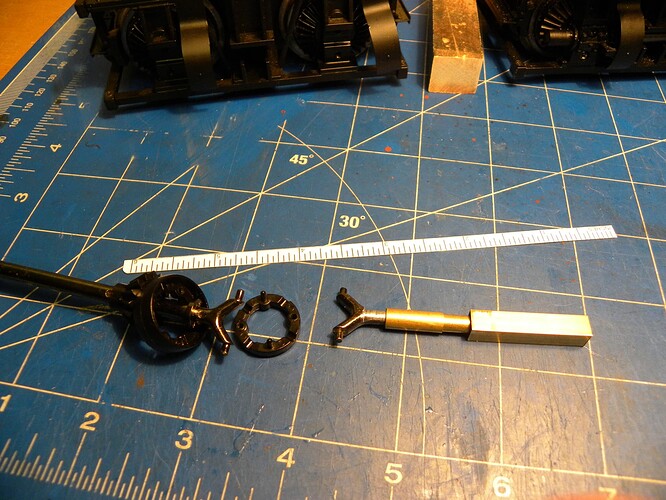 The completed drive shaft assembly after the universal joints have been reassembled. Pictures of the installed assembly will come later. The short shaft and sleeve on the right side attach to the shortened shaft at the back of truck #2
(

That’s all for now

Thanks for taking a look

OH sure, catch me out

In my hurry to get the shaft assembled so I could post an update I assembled the yokes in reverse, I didn’t notice until after I posted the pictures. I thought “I should change that” but then decided nobody would notice

my bad as they say. It has since been changed.

Although I don’t think it would make a bit of difference in the operation.

Thanks,good to know someone is paying attention.

Well, I wasn’t going to be the one to say it, but since its out

OH sure, catch me out

In my hurry to get the shaft assembled so I could post an update I assembled the yokes in reverse, I didn’t notice until after I posted the pictures. I thought “I should change that” but then decided nobody would notice

my bad as they say. It has since been changed.

Although I don’t think it would make a bit of difference in the operation.

Thanks,good to know someone is paying attention.

Well …when ya build one of THESE:

You tend to notice the little things…

I just love that shot!