I need to buy more turnout motors for my outdoor layout. On the ground. I have two LGB EPL drives, one of which doesn’t like to throw in one direction. I haven’t been able to figure out why. So I am looking at maybe buying all 4 new ones of a different brand. Who makes the best, strongest, most reliable automatic ones? They can be DCC but don’t have to be. I understand how EPL works. I run DCC in my engines but haven’t gotten around to figuring out DCC for the turnouts yet as I had the EPL working. My layout will be running two alternating sidings so the motors will be getting thrown about once a minute for hours on end.

I guess I want the 6 million dollar turnout motor.

As far as I’m concerned the LGB one are still the best, and there have been several different variations thru out the years and some of the parts are not interchangeable with newer models, just don’t use grease, and make sure the motor is indexed correctly , also check voltage one way and then the other, it could be even though they work on the same two wires that there might be a voltage drop in one direction and not the other, when I had mine up and running I used a 18vdc computer and double through, center off, momentary switches and they worked great here in Florida 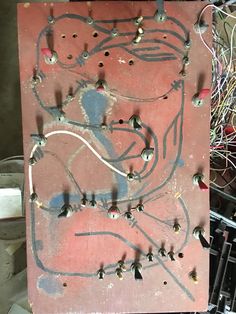 for the last fifty years i am using LGB. indoors, outdoors and indoors again.

the “modern” epl drives are even better, than the old system of the first years.

when something didn’t work, it (seldom) was from bugs or ants inside, or (occasionly) mud, but in most cases it was from setup mistakes or bad connections, or burned reed contacts.

you could change to an air pressure system, eliminating moisture and bug problems.

I have two LGB EPL drives, one of which doesn’t like to throw in one direction. I haven’t been able to figure out why. My layout will be running two alternating sidings so the motors will be getting thrown about once a minute for hours on end.

I guess I want the 6 million dollar turnout motor.

Does it not throw, but it “want’s” too or does it just not “want” too?

If the first (i.e., you can feel the motor trying to move), it could be because the linear gear is too far to one side and you need to center it to get more throw. Otherwise, look for stuff jambed along the throwbar, or more typically, jambed at/along the hinge point.

If there is no response in that direction, either you are feeding dc (as opposed ac) to the diodes, or have a bad connection between the ac, diode, switch motor wire.

They are reliable assuming they don’t get watered. If they do (like several of mine), the internals will rust and flake to pieces. Also, they will corrode at the internal solder points. If they stay dry, I have several installed in 1997 that still function properly.

BTW, mine thow less than every minute for hours on end without fail. One of the nice things about the EPL is their versatility in that they can be triggered by so many different methods from a simple reed switch, to a complex lattice controlled by a microprocessor. I use 555 chips and relays to control mine where automated.

I have had it apart numerous times so there is nothing in the way. It will move freely without power so it is not mechanical. When under power, it will throw fine in one direction, then the other direction it will half throw and stay there while buzzing. Seems shorted. It won’t move by hand. I have tried replacing the relay and it might work a couple of times then starts again.

Sounds like a bad diode, or you are using dc power through the diode.

Buzzing is typically a sign that it is receiving ac rather than half wave dc (bad/shorted diode). OTOH, turnouts that throw fine one way, but not the other are typically as sign of using a dc rather than an ac power source through the diodes, so they never produce the other polarity to throw the turnout in that direction.

The “half way” before it does this is what’s confusing.

Do you have the epl (DPDT) contacts on it and if so, what is it doing? Often, they will not throw all of the way (or one/both of the two legs isn’t/aren’t properly seated) and many of mine have shims inside to make sure that they do.

Pretty sure I am using AC. I have replaced the diode in the relay a couple of times, even with larger/stronger diodes. I have even replaced the whole relay. My track is apart since I am building my permanent layout so I can’t check/test anything. I hope to have it done by October. Looks like the temp is supposed to drop next week so I might get something done.

Dan. Can they be programmed using a NCE controller? I assume so but…

The 17100 would appear to be a reed switch with a pair of diodes. Assuming that you are feeding it a/c (~16 volts), probably one of the diodes has gone bad. How many turnouts are you powering with this? They are designed for really just one, and trying to fire two will greatly shorten their life span. Forget about 3 or more.

Just one switch. I have replaced the diodes in the bad ones multiple times with stronger diodes. I find it quite strange as there really isn’t much to the system.

The 17100 also has a small cap to help boost/extend the closed signal so the motor will recognize it.

Actually, IIRC, it is there to protect the reed switch from arcing. Can you provide a diagram of your set-up?

I don’t anymore. It is not set up as I am in the middle of building my permanent layout.

So the Zimo MX820 can use a small isolated rail to act as a sensor? How long does this section of track have to be?

I use ABC to stop my engines. Would this small section of track trigger the ABC?

How do you wire it to the motor? The wire diagram in the manual doesn’t show this. I only see the two ends of the coil. The manual shows 3 wires going to it.

The MX820D has 2 wires on one end (violet/green). These are the rail triggers. Red and Black are track power, the other 3 are for swirtch drives (EPL), but only 2 are used (orange/grey) as the third (blue) is power for 3 wire motor units.