The early Bachmann 4-6-0s are starting to crack their drive gears. In particular, the ‘gen3’ units, made in the 1990s (I think) before the arrival of separate brass axle bearings, seem to be most vulnerable at this time.

Symptoms are that the motor spins but the loco doesn’t move. (Note that the motor mounts are suspect too so your motor may have shifted and the worm gear is no longer in contact.) There’s some info on George Schreyer’s page:
Big Haulers Tips
Here’s George’s photo of the gen3 gears, with the drive gear offset from the center. 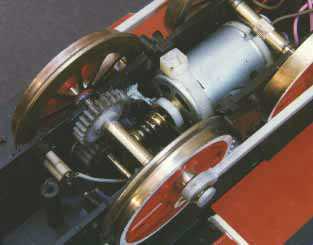 Here’s a pic of a bad gear on the axle. Note that the wheels are press-fitted onto the axles, unlike the later versions which had screws.

My instructions for removing wheels is in this thread:
Replacing Gears on an old Bachmann 4-6-0 or 2-4-2
When replacing wheels, watch out for the pickups which stick out of the frame. This would be a good time to clean everything and oil/grease the gears.

I had a couple of these to fix, so I reached out to the Gear Man, Jerry Yeramian (girotek at rcn dot com.) He produced a couple for me, and says they are available to anyone - just send him an email. They are 26 teeth for the 6mm axle.

In this pic there is a new gear with a boss installed on the axle. We found there is an earlier version without the boss, but otherwise identical, as you can see on top of the motor, and this install demonstrates the later version with boss fits the older loco.

Note: getting the wheels back on straight so they don’t wobble is tricky, especially after you bang the pins in for the rods. Don’t worry too much - they were probably wobbly before! Just press them straight with your fingers.

Sure makes me glad I put in a BBT drive!

That’s certainly true of these Gen3 locos. But the later and current ones seem to have pretty reliable gearboxes.

I installed the gear on a second Gen3 loco this afternoon and came up with a better way to re-install the pins in the rods. 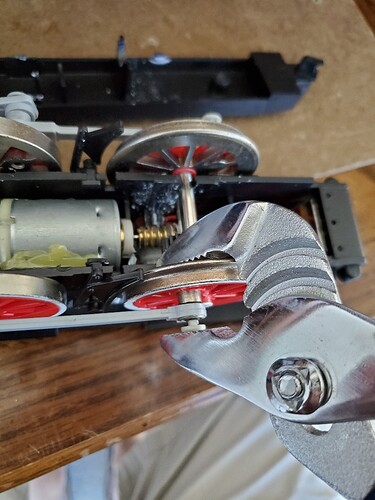 Thanks. Very timely, considering my ongoing battle with our own 4-6-0. We repowered it with a new chassis ~2-3 years ago. As mentioned elsewhere, I did not see any “gear drift” when I last had it open, and the blasted thing ran fine on our improvised test stand, so I am thinking it may be an issue of the worm rising out of place under load.

Anyway, I’ll tag this post for reference when I return to this project…after the MIK!

Here’s get another success for Jerry the Gear Man. It’s a gen5 chassis with Annie details.

This one had a cracked gear so I took it off and sent it to Jerry. Back came a pair of blue replacements: 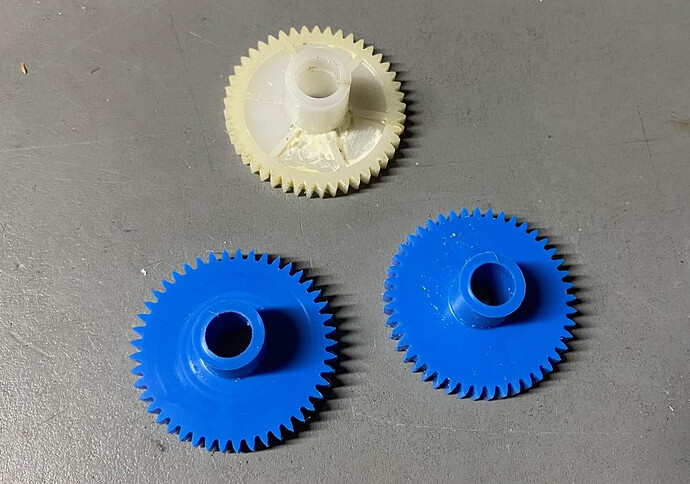 and here it is in the chassis for test. Very smooth. 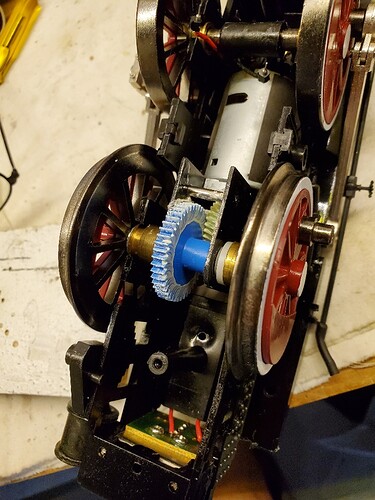