Gears are on hand. Let the adventure begin!

Today was the day. A passing hurricane made diving an iffy proposition, so the 1:1 crew being busy, the1:24 gang and I set-to to bring North Star back to life. 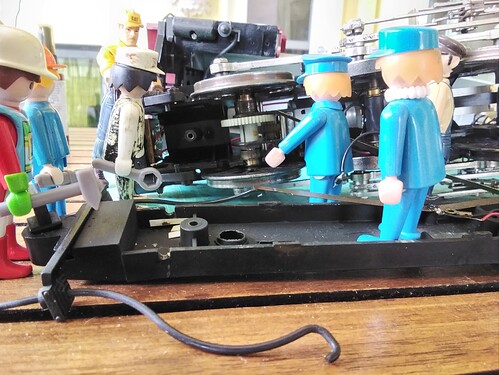 First things first, though. Many thanks to Pete ( @PeterT ) for his posts above, or I would never have figured out how to get those wheels off! Secondly, kudos to him for identifying the issue. You can see the black line above that is actually the split in the collar.

Removing the drive rods and prying the wheel covers off with a flathead screwdriver proved relatively easy. 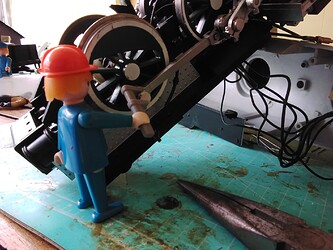 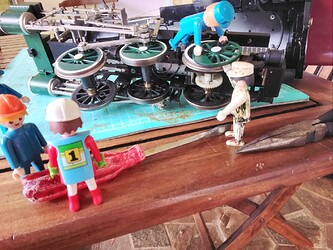 After removing one wheel, I studied the chassis a bit to see how best to tap out the axle. It turned out I first had to remove a pin above the driver. I used a small screwdriver and tack hammer to lightly tap it out… 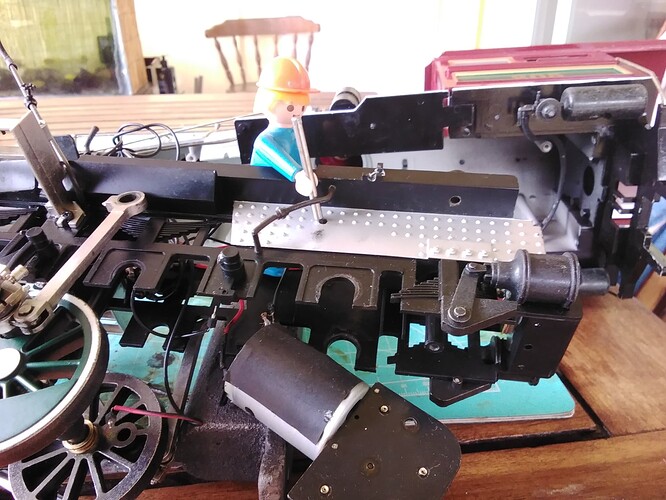 …which let me pivot out the motor block.

Next, I fiddled around with the motor block and my vice… 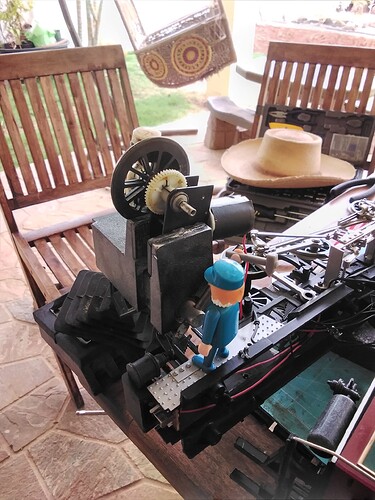 20220716_1505291920×2560 400 KB
…until I got it mounted in a way that let me tap out the axle. Once that was complete, I pushed Jiro’s gear into place as far as I could then puttered about trying to figure out how to get the whole to slide back together. Forgetting Pete had clearly explained that above, I ended up mounting the motorblock vertically with the axle in the vise and tapping the wheel until all was aligned and snug. Naturally, I forgot a bearing… 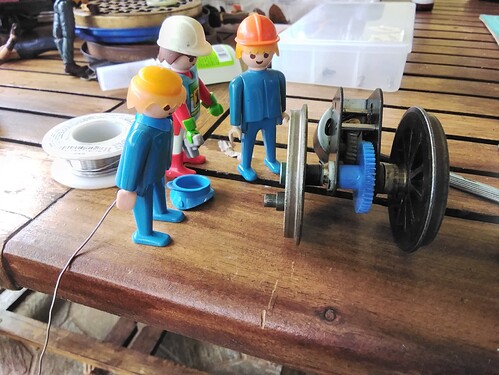 I would like to point out a good design feature here. I was worried about quartering. The axle ends are, for lack of a better description, “Zepplin-shaped,” so the wheels go on quartered. There. I said it. Bachmann did do something right.

Moving right along, Kid-zilla did join me at this point, roughly 2 hours into the process, for reassembly, testing, and fitting out. Here, he replaces the weight. 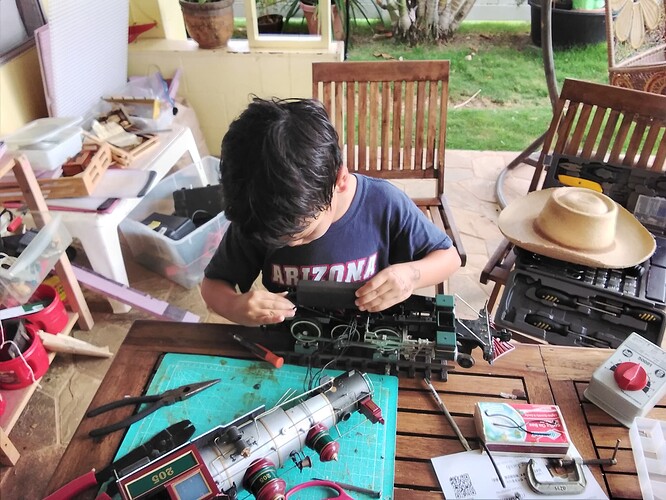 20220716_1649581920×1440 267 KB
In fact, were it not for him, I would be tearing down North Star tomorrow to install that weight! The reassembly process also gave me a chance to practice soldering as, true to form, I snapped both wires off the motor. It also involved reparing the mount for the brass busses that run along the sides over the drivers, fashioning a nylon washer to replace the worn out one over the forward truck, and testing, retesting, and testing again to make sure the chassis was running right. We noted that it would freeze as if it lost power, discovered pressing on the bottom fixed the problem, and realized a misaligned bearing and internal wiring were preventing the bottom plate from “sealing” and thus causing erratic contact between pickups and the bus. I am SOOOO glad we bought those test rollers earlier this year!

Kid-zilla had taken the tablet at some point, as he thought everyone should see the new gear in place… 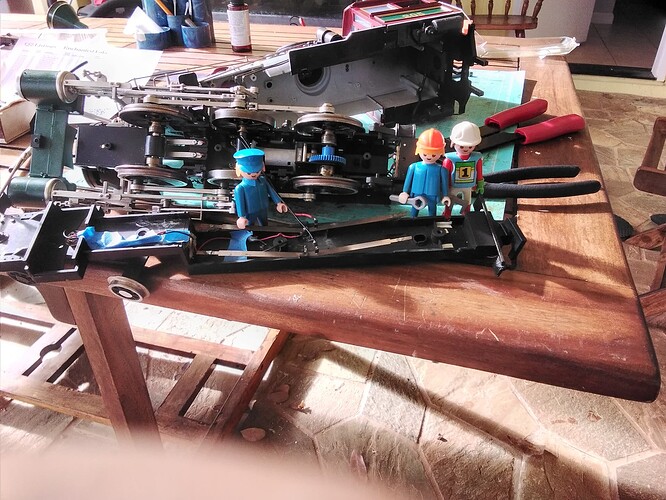 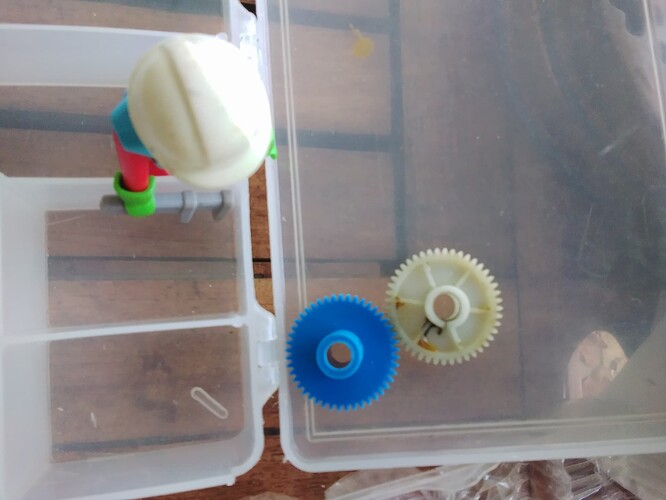 At last we loaded the 1:24 gang into their work caboose, hooked in a car, and placed North Star on the track. 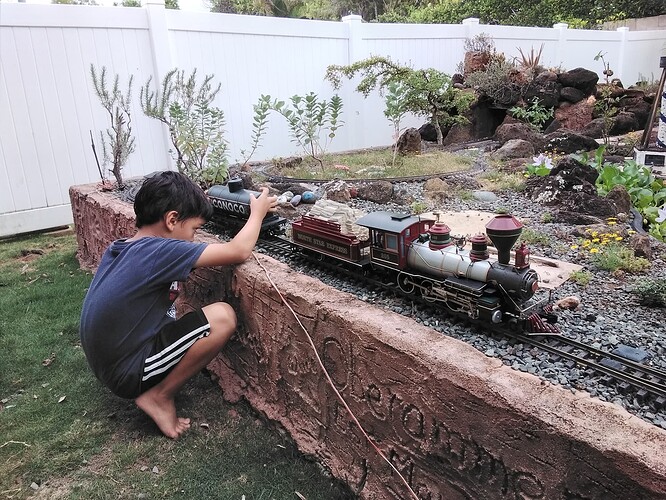 20220716_1741301920×1440 522 KB
I thought I got video, but it does not seem to have saved, or I saved it in some random spot of my tablet. This is what I get for not having a teenager present! Long and short of it, North Star ran beautifully for the first time in a long time, and I am happy to say that a cantankerous family favorite (perhaps a favorite because “he” is so cantankerous!) has returned to the rails (and I knocked one more item off the Triple O -- 2022 Plans & Objectives list!).

Video evidence tomorrow, if I can manage that, but otherwise this project is pau (finished)! Thanks again for all the help along the way!

As promised, here is proof we fixed North Star, our Bachmann 10-Wheller (filmography courtesy of Kid-zilla):

Have a great week everyone!

I periodically stop and whine too, but there is no fix.

Yep. I am hoping he doesn’t take the skills and interests and apply them to his own hobbies like his older siblings did!