Another Weekend, Another Fried Locomotive -- Bachmann 4-6-0

I think I have 5 “can someone help me posts” to one “may I suggest post;” tonight I will add another to my “someone help me” column.

After a good weekend of dickering on the Triple O (structures, cribbing, planting, roadway work, etc.), I sat back to relax, eat dinner, and sip an adult beverage. Naturally, this is when a crew member announced “North Star is making a funny noise!” Sure enough, the loco was making a high pitched whine like her motor was turning but the gears were not meshing (I recently had an older LGB loco, our 0-6-2T “Gustav” eat his idler gears. Totally different noise, I can now confirm!).

This loco get several hours of run time a month, pulling 2-3 4x axle coaches over a short railroad with no grades. It is from a Christmas themed starter set less than 10 years old that I bought from a friend, and it only saw seasonal service about the tree before joining the roster of the Triple O. I understand from ghosting around the forums the 4-6-0s from Bachmann starter sets had issues with their gear trains, but is this sort of failure normal for the breed? Is it worth dropping a new motor block in this thing? Or should I make “North Star” the first contribution to my non-existent spare parts box?

With my two heavy locos - “Gustav” and “North Star” - now down for the count, the Triple O lacks for motive power that doesn’t look overly ridiculous pulling my larger rolling stock.

As ever, thanks for your suggestions, have a great week, and Happy Thanksgiving!

Unfortunately Eric, those early Big Hauler loco drive trains were crap. They have steadily improved over the years. I have 2 of the original Big Haulers and both have had the drive trains replaced with BBT 460 drives, which are no longer available.

Bachman does sell the Anniversary 4-6-0 drive trains separately so I would seriously consider replacing the Big Hauler drive train with one of those.

I have 2 of the Annies that have plenty of run time on them and neither one has given me a problem. Both of them are close to 20 years old.

Now, how much the shipping would cost would be for Hawaii is a different story…(https://www.largescalecentral.com/externals/tinymce/plugins/emoticons/img/smiley-wink.gif)

There is nothing worse than a engine that doesn’t run.

As you now know the early Bachmanns from starter sets were not very reliable. Who knows why Bachmann skimped on the gears. What could be worse for business then having a train that works for a while then falls apart? The Spectrum series is much better. Every once in a while Bachmann has a sale on parts and a new drive can be had for short money.

Have you thought about adding a diesel to your roster while the steamers are down? I would suggest a USA trains NW2. How about a LGB 2-4-0?

Unfortunately Eric, those early Big Hauler loco drive trains were crap. They have steadily improved over the years.

HO and On30 seem to have not; of 27 HO Bachmann locos in possession 11 have have had mechanical or electrical failures, the two On30, half of them. One HO even had a circuit board fire with little yellow flame and everything.

The several Big Haulers and one Annie bought in 2009 from some settlement money all seem to be okay after 8 years of what could be considered light, meaning infrequent, usage. A couple have seen twice a month use for several hours at time for about a year down at model RR club on track under the HO layout.

I second the suggestion that you can buy a complete new drive on sale at Bachmann. If you can figure out the B’mann model number, you can possibly get a new chassis for 49% off ($45).

There is nothing worse than a engine that doesn’t run.

As you now know the early Bachmanns from starter sets were not very reliable. Who knows why Bachmann skimped on the gears. What could be worse for business then having a train that works for a while then falls apart? The Spectrum series is much better. Every once in a while Bachmann has a sale on parts and a new drive can be had for short money.

Have you thought about adding a diesel to your roster while the steamers are down? I would suggest a USA trains NW2. How about a LGB 2-4-0?

Many times when I asked about Parts, I was told that the Chinese thinking was: ‘These are toys, you break it? You buy a new one.’

It worked for toys because they made them cheaper and cheaper for short memory kids, spoiled with New.

As hobbyists, we are a different breed and we expect our models (true and accurate) to last for ever, or at least a couple of years since we pay so danged much for plastic toys …

They used cheap plastic that shrinks with time (out-gassing) and they crack on the axle.

The unscrupulous Chinese used reverse engineering to give them selves pay raises … substitute a cheaper ingredient and pocket the savings. Don’t blame the duped buyer. Eventually the companies learned to keep an expert on site, to verify the product. Still some inferior ingredients might not show their evil ways until we acquire them.

I’d suggest the Aristo C-16, the new model with the belt drive. It’s a ‘close enough’ size. There are belt drives in robotics … should the need arise.

Bachmann does hold a sale every now and then. I was told that newer chassis; wheels and motor and part of the boiler, with metal side rods would have metal gears, but a peek just disproved that … Dag nab it! Only the worm is brass. I was going to build on it… but methinks it’s going to be a;

Edit; Hmmm maybe Ray could cobble me up a dismal…

If you have access to a 3D printer, you can manufacture new gears. I did with Bachmann’s G-scale trolleys, and that seems to have worked out fine.

Mahalo (Thanks) all around. Lots of good suggestions. It seems like getting the “anniversary edition” chassis may be my best shot. I am assuming this mates to the boiler and cab with little difficulty? Though in Christmas colors, the color are muted enough to allow “North Star” to pull my heavier coaches throughout the year. It is Hawai’i. Bright colors work. I am going to have to chew on this…NO 3D printer, unfortunately.

The other suggestion seems to be retire the loco and replace it with something new. I am trying to get the RR to be 1880-1920 Hawai’i (give or take), which lets me have fun with my Wild West PLAYMOBIL and the kids as I slowly fix the Triple O in place and time. It does preclude diesels. All of my curves at 4’ radius, too, which puts an upper limit on loco size. I have been examining the roster of the Oahu Rail & Land, and they ran about everything that used steam. The plantations were an even bigger hodge-podge. As a consequence, my Stainzes and other little LGB 0-4-0Ts look right at home. The 0-6-2T even looked “right.” Sort of looking at my options:

Anyway, good food for thought. In the meantime, the 0-4-0s will double head or split “North Star’s” Christmas consist this Season.

P.S. Shipping is roughly half the size of the part. Price of paradise.

The chassis replacement isn’t too hard to do, we’ve upgraded two of ours that way. There’s a bit of interference with the air tanks, but it’ll go. And there are two different styles of chassis, in addition to the different colors. One type has two plugs on the back - one for the sound and the other for the light on the tender. If you don’t have a light back there the single plug chassis will fit better.

Mahalo (Thanks) all around. Lots of good suggestions. It seems like getting the “anniversary edition” chassis may be my best shot. I am assuming this mates to the boiler and cab with little difficulty?

It’s basically the same boiler and cab, so it should fit, like was mentioned above with slight modifications. The “Anniversay Edition” is a bit more gussied up then the basic Big Hauler. Thanks again every one.

The technical diagrams that came with the kit allege this is an “Anniversary Edition.” They don’t give a specific model number, so who knows? All the same, I am going to swing on a new chassis. I am assuming that I just pick the one wired for the features on this loco - smoke and direction - and I am off to the races. This loco is just too nice looking to cut or to let die as a shelf queen, and the repair looks rather simple.

On the upshot, I will now have a junk chassis, pilot, wheel, and rod set to tinker with…

Well, the order is in…Thanks again to all for your guidance, and please accept my wishes for a Happy Thanksgiving!

Your welcome, and a Happy Thanksgiving backatcha!

New chassis arrived today. Let the fun begin…after everyone under 4’ tall is asleep!

Can no repair be easy? I am unable to get the boiler and cab assembly off. I have removed the three screws that go vertically into the chassis from below, on screw that goes in vertically between the cylinders, and two that go in horizontally on tabs half way down the boiler. I have check to make sure I have no detail parts linking boiler or cab to chassis. I can start to lift up the cab, but it hangs up on the sound’s on/off switch. What am I overlooking here? Do I have to figure out how to disassemble the cab?

On my Big Haulers there are also 2 screws up behind each air tank. And upon retrieving my SPC Annie from back row of top shelf, dang it’s dusty, it has same 4 screws up behind the air tanks.

Looking at mine which it has been a couple years since I’ve had apart, the cab is not encountering the switch, it is the upper boiler piece doing that.

And if I remember right it is necessary to lift up front of boiler top part because running boards have an interior lip which retains them.

Here, found this buried in my folders and just uploaded to flickr, shows some of the features I mentioned, note that frame is upside down. 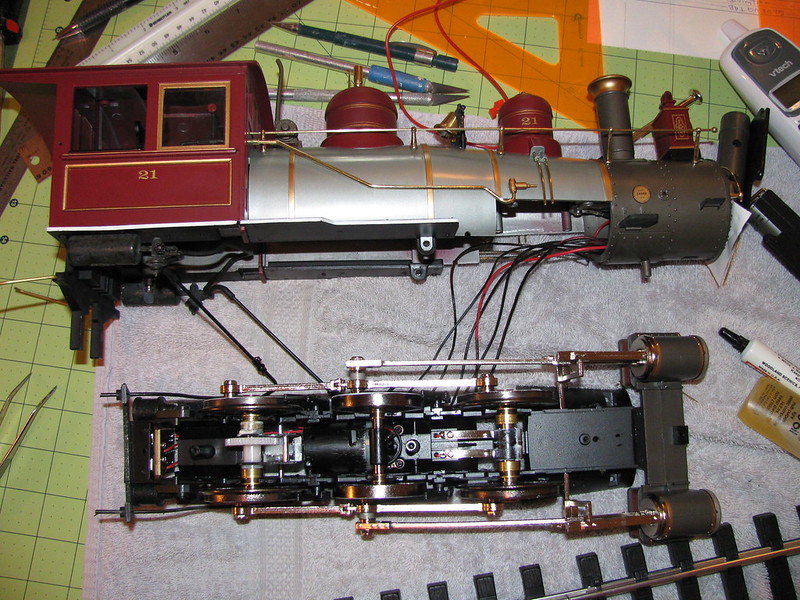 I don’t remember the author of this, possibly Dave Goodson. I have it as a text file on my computer…

The Top Side
Pry the pilot support rods from the sides of the smoke box
Remove two long screws under the cab
Remove two short screws from the sides of the boiler near the lower center of the boiler
Remove the extra long screw under the cylinder saddle
Remove four long screws from under the air tanks. The tanks will fall off.
Carefully lift the shell off. Be careful about the wires to the smoke unit and headlight.
Do your stuff
While you’re in there, glue 1 or 2 lbs of lead on top of the cast iron weight. Note that extra weight will add capability to pull more cars, which means that you can make the motor work harder, which means that the motor will run hotter. If you haven’t reinforced the motor mounts, adding weight WILL result in rapid failure of the engine.
Reassemble in opposite order.

Can no repair be easy?

Of course not. The only one I found to be reasonably easy was the K-27, which was surprising.

Just got to keep looking for screws and tabs.