20 years on the RIP Track

As the title states this Shay came to me in 2002, it had been detailed, weathered, and a P97 board installed. It had also been knocked off the table and broke all to hell. Also during it’s short running life it had been left out in the weather and suffered some damage from that.

So when it was givin to me it went in a box and sat on a shelf gathering dust. I always figured it for a “someday project” because of it’s unique look. For some reason this past December seemed like a great time to begin the rebuild so out it came and the assessment and tear down started. As usual I didn’t think about pictures until I was well into the project.

Stripped down and the cleanup started. Old trucks gone and the speaker ring cut off to flatten the deck. All original electronics removed to make way for the new RailPro system. Some wires were left in place to use as pull wires so I didn’t have to remove the boiler. 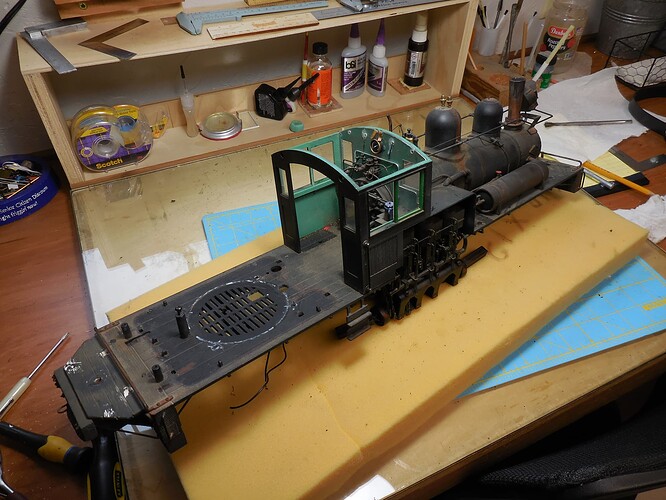 A couple pictures showing the, to me, excessive weathering and dirt accumulation on and in the loco. 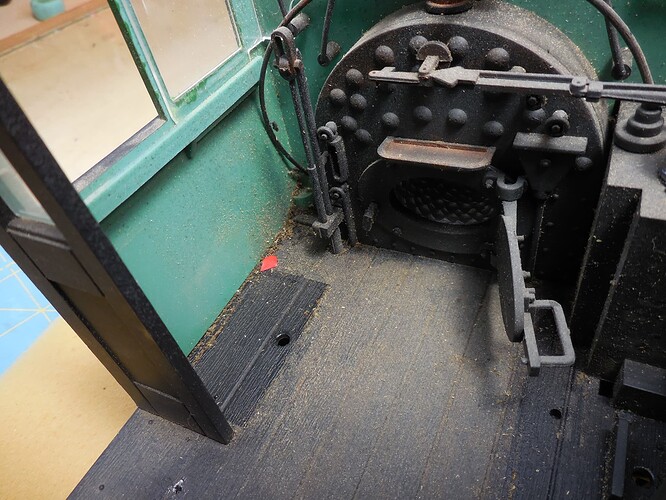 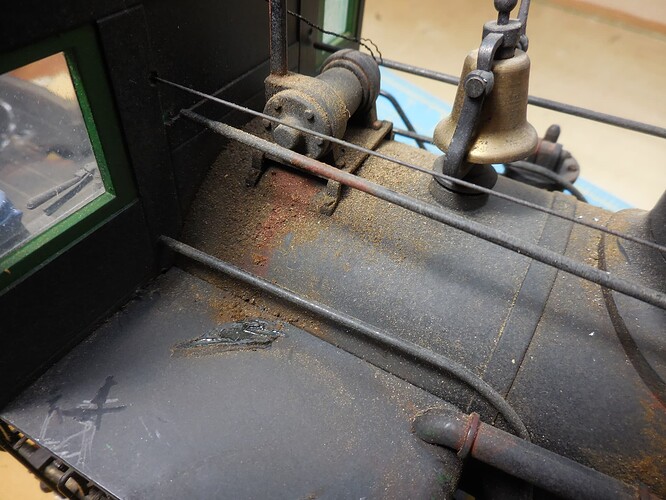 The rear crane deck had been broken loose and seemed too lightly built so I beefed it up and added some detail to it. Also added a rear coupler pocket that had been cut down to fit under the deck. 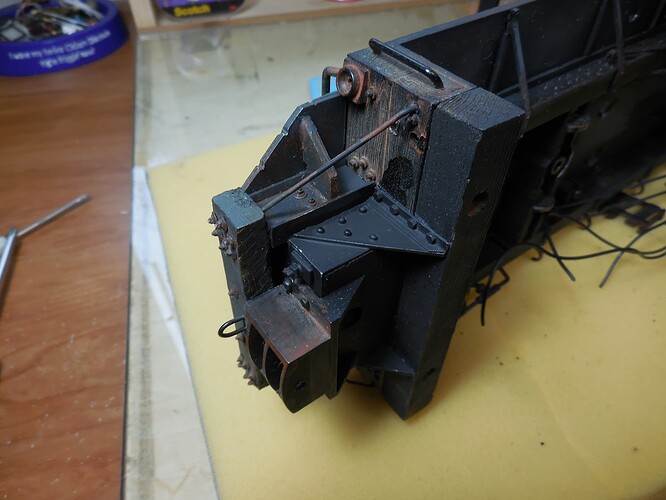 Test fitting the crane boom back on the deck. 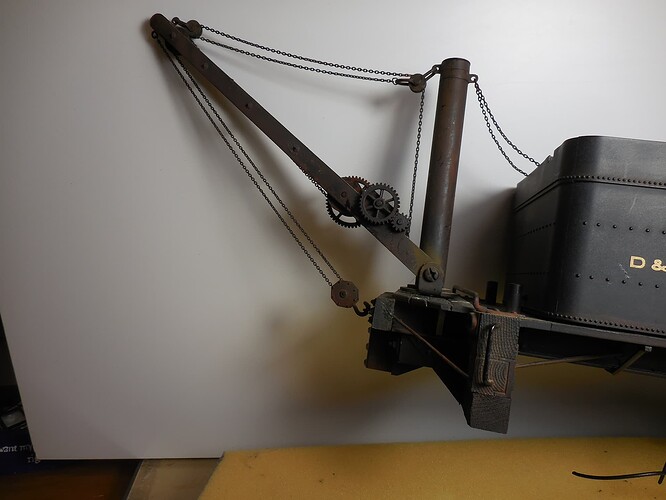 Then the project went on hold waiting for Rail Pro and other parts and also The start of the MIK Challange. Although I did get the new trucks wired and mounted, my last pair from the original introductory price offering of 99 dollars, remember those?

The crane on the back is really neat. It looks like it came from a USAT car?

Don’t know it’s origin but is solid steel not brass and has metric threads.

This shot makes it looks like a barn find, which is the back story on my 2 truck! 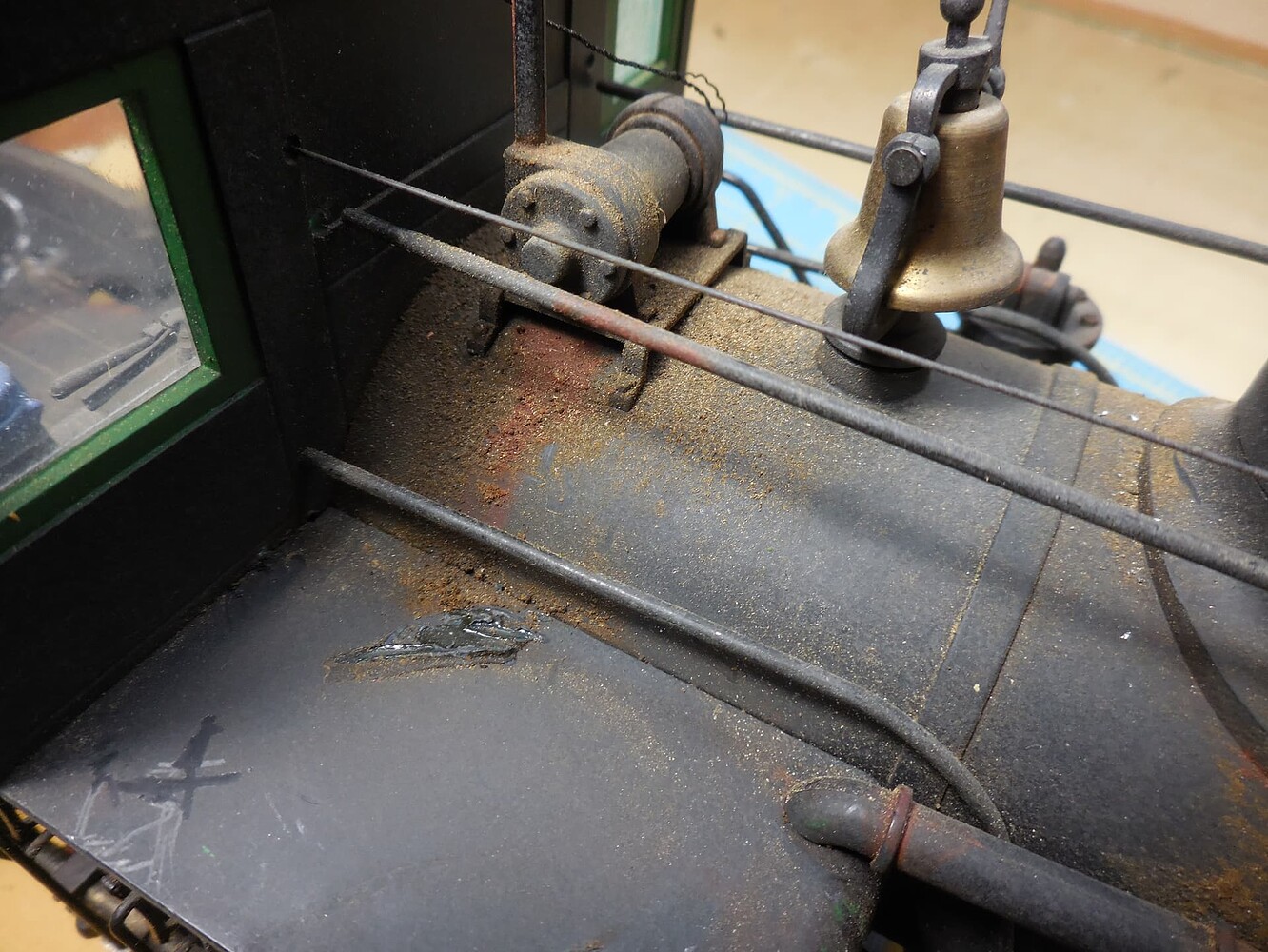 I am looking forward to seeing you bring this old iron horse back to life!

Robbie at RLD recommended this speaker, it’s about the size of a Silver Dollar and turns out has really good sound quality. I drilled a hole in the bottom of the ash pan and covered it with vinyl window screen. Then built a speaker enclosure by turning down a 1 inch PVC coupler on the lathe. Worked really well and snugs right up in the bottom of the fire box/ash pan. I like mounting the speakers in the locomotive as the sound is coming from where it should as they pass by, not back in the tender somewhere. 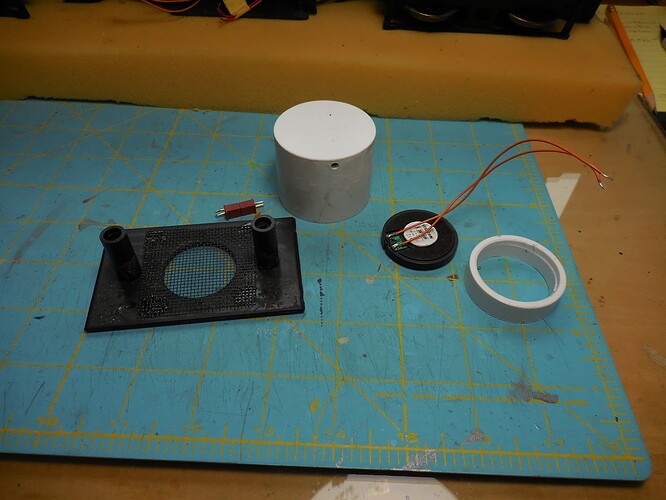 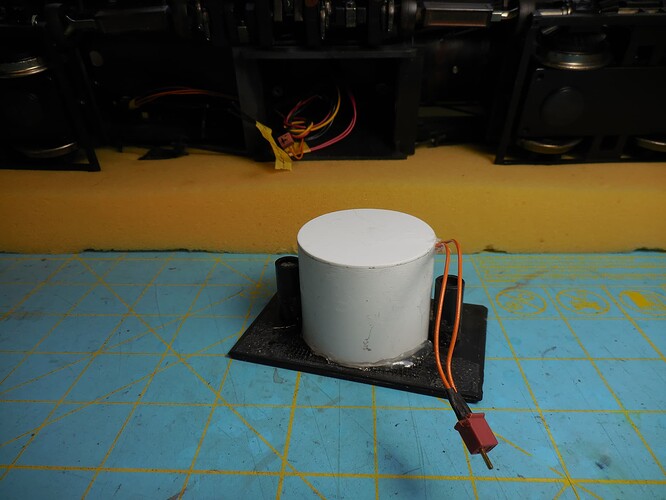 There are no more in progress pictures just the finished engine. There were lots of other problems to repair like the two front hooks on the tank being broken off and the screw mount fractured. The front pilot deck needed some major repair and came out looking pretty good and several other more minor problems. At least the frame rails weren’t tweeked.

Finish pictures yet to come.

Well let’s wrap this up. Just as information, RailPro was installed with onboard battery and LED lighting, all From Robbie at RLD, and the installation was done with the help and guidance of a fellow forum member, thanks again 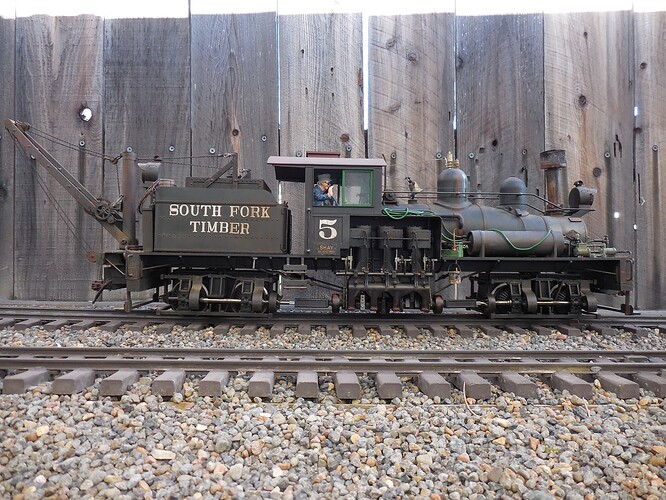 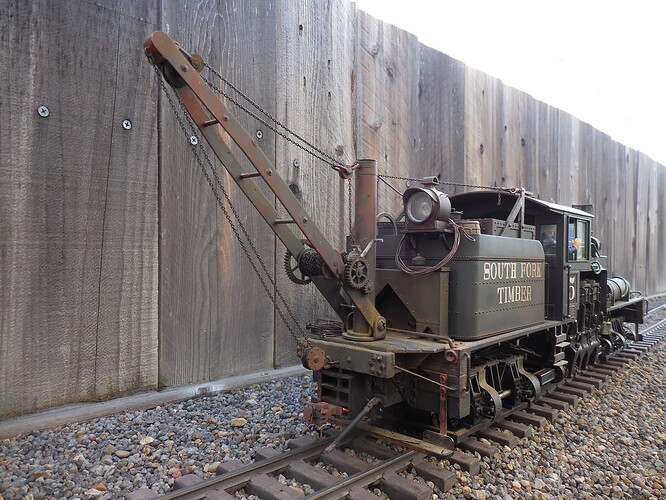 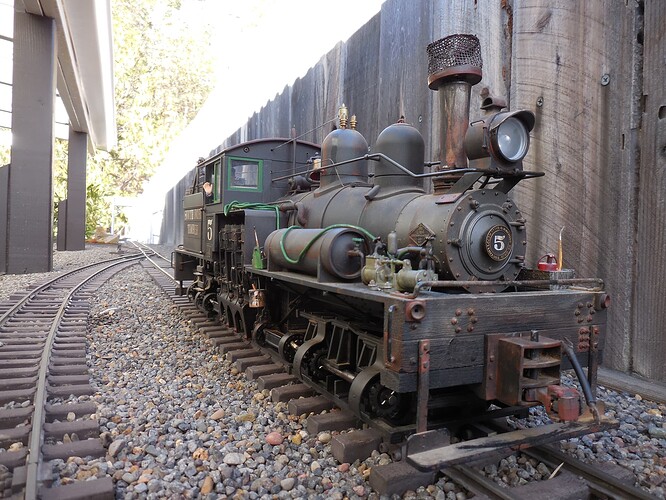 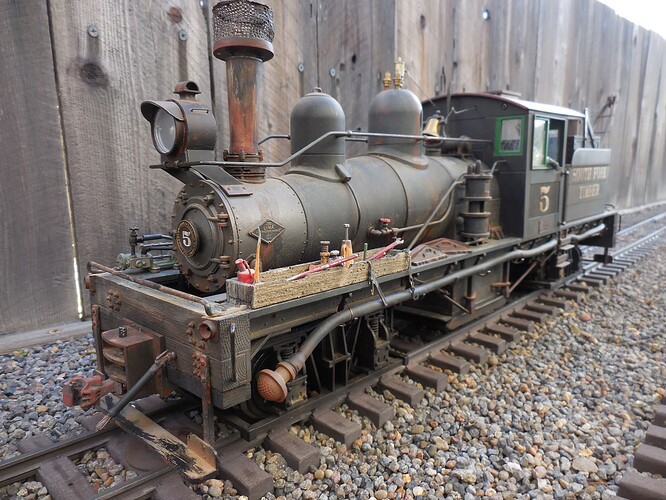 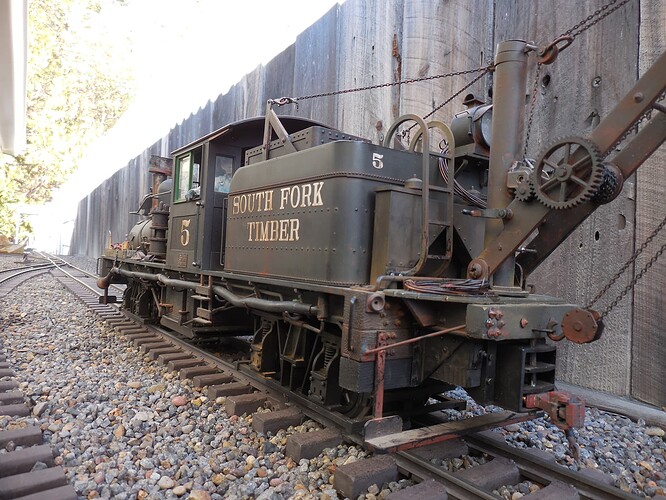 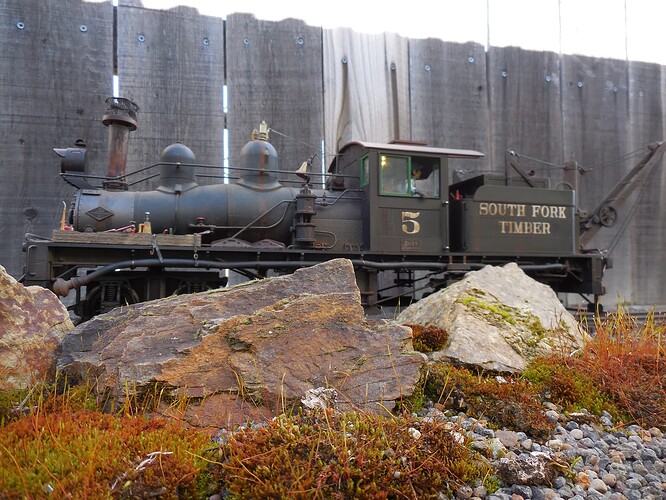 The back of this locomotive will be limited to a flat car or maybe a gondola because of the crane boom, but that is alright as I have plans that will make this work

It runs and sounds great well except for that sound run-on at shut down. Will Ring attempt to correct this? Who knows?

Great recovery Rick. Looks like it never had an idle moment in it’s life.

Nice save, Rick! What a cool looking beast!

That really looks great - and unique!

Regarding the RailPro chuff dilemma: I haven’t tested my Shay extensively, but with my two C-19’s I have the purple wire implemented for chuff trigger. After playing with it for a long time I’m convinced that what Ring is doing is using the input to help sync the programmed chuff to the wheel movement. If I slow down VERY gradually, the automatic chuff seems to switch to being driven by the input and does stop chuffing when the wheels stop moving. It really takes a light touch on the throttle.

Don Sweet has suggested that using around 25% of “Load” helps, but I didn’t notice any difference. I’ve experimented a lot with Load settings and I’m not a fan. I find getting the start speed tweaked properly and turning off low speed enhance gets me the throttle response I want.