Onward the Pequod -- Getting a B'mann Railtruck to Work Permanently

Just use a small piece of double stick tape so it doesn’t rattle around and stick it right to the deck.

This weekend, I let O.S. mask… 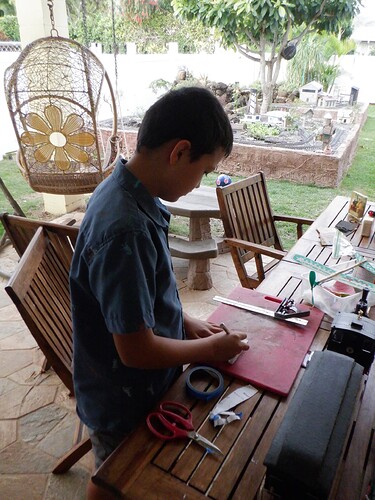 DSCF65301920×2560 524 KB
…and paint the frame for the pusher car. Though the original coat of primer was a bit “gloopy” from rushing the job, holding the can to close, and spraying on too much, I am trying to make this his project, warts and all.

He did clean up the primer with some sandpaper, and, with a little help of the 1:24 paint crew… 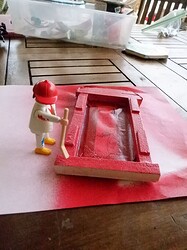 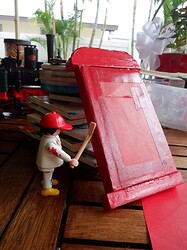 DSCF65351920×2560 406 KB
…ended up with a decent coat of paint. O.S. was even proud of his work! This week, I’ll help him mask the timbers so he can paint the undercarriage and battery deck black. That’ll set us up to mount the battery and magnet control circuit. We also found some small metal brackets at the hardware to serve as our drawbar until I can look at some O-scale couplers. It won’t be a pretty solution, but it will do. The brass will roll into some future project (10 months and 8 days until the next MIK!).

I use my new “shock proof” camera to verify the downward acceleration of gravity is still 32.2 ft/sec2, so no photos…

Now that there was funny.

As O.D. turned foam into a grain elevator, Oldest Son and I took a round turn on this long time resident of the Track of Perpetual Puttering. To the degree possible, I tried to let him handle tools, serving only a safety observer, occasional assistant, and “idea-bouncer-offer.”

He began by getting the deck back on the motor block. This required him to cut a small hold to allow us to pass the DPDT switch for direction control up from the motor inputs. 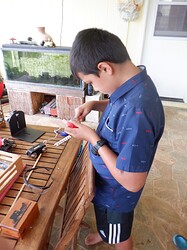 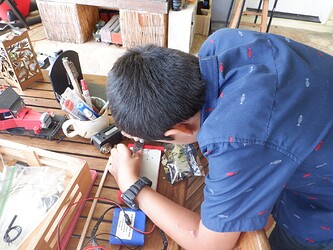 After that, I helped him install the “axel extenders” and journals. We tried super glue for the latter, but, ultimately went with E6000. 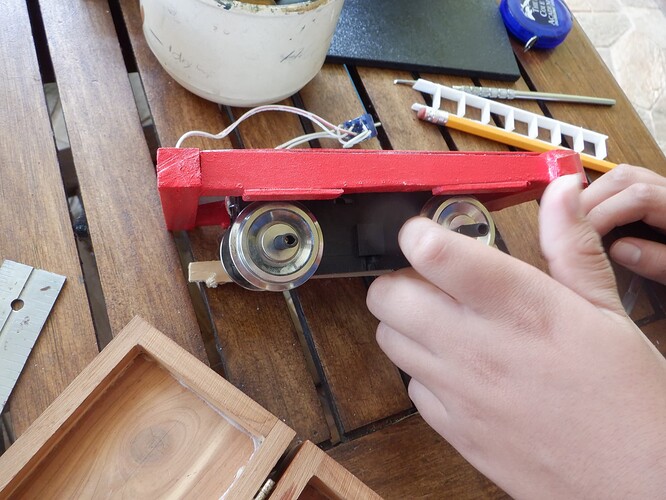 He next took on the gondola bit of this to house and hide the battery and circuit board. This began with cutting some on-hand 1/4"x1/4" basswood, tapping some holes with the Dremel, and nailing the new posts in place. 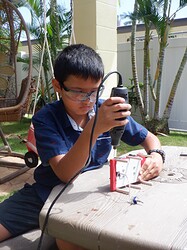 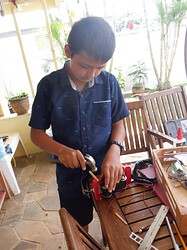 After that, we wired in the battery and G-Scale Graphics Magnetic Critter Controller and tested the pusher car and Charlie. Success! The rounded bumpers worked as planned, but, as soon as the pusher stopped, Charlie kept on coasting. Also, you cannot reverse the rig. This required us to install a temporary draw bar.: 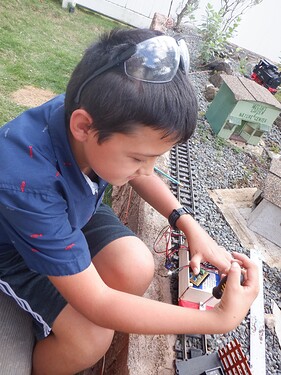 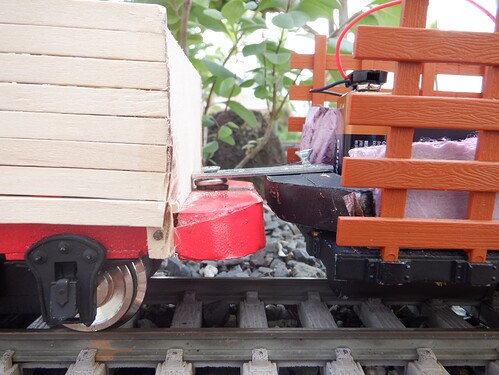 It required a bit of fiddling, to include the installation of some washers from long-broken epees, but this allowed the pusher to push / pull Charlie with ease. We did note, however, that uneven track will cause the pusher car to derail, presumable due to limited ability rise and fall in the vertical plane.

We will tape down the electronics later, but, as you can see, it is a tight fit! 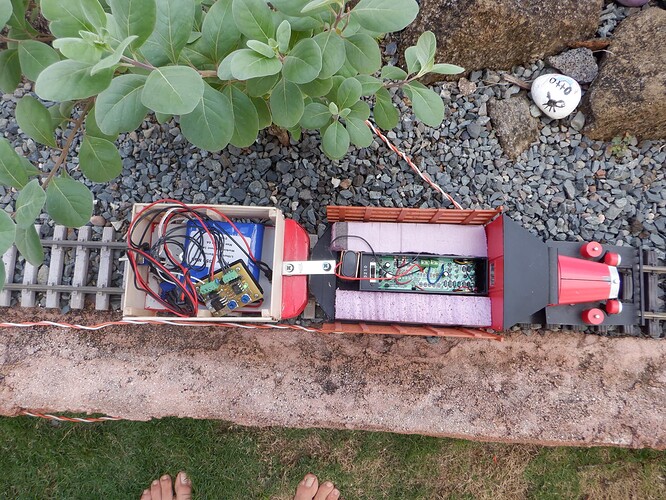 DSCF67181920×1440 504 KB
We experimented with Charlie’s mostly-smoked circuit board, and, lo! the 9 volt lit up his headlamps! To make the after bumper stick, O.S. scrounged Velcro tape. Then he cut some scrap foam to brace it. In time, I’d like to replace this with O-scale couplers. I have to actually see an O-scale coupler before trying!

He took a very excited video…
Very Excited Video
…and I hope the absolute lack of clarity helps express his excitement. In hopes of showing a better proof of success, here is the video I took:
Less Excited Video
This was more model railroading in one day than he does in a month, so I released him to go to his friends. He did promise to paint or stain the gondola walls and to craft a tarp to cover all the electronics. At that point, I will declare this project done and done in good faith.

Updates as required, but they will hopefully be few in number!

Thinking outside the box that way O.S. will serve you well. Nice work on the Pequod, won’t be long before Dad comes to you for tool handling.
Nice work on the bumper and the drawbar fix, and hole location for the switch.

Thinking outside the box that way O.S. will serve you well.

@David_Marconi_FOGCH I passed along your comments. O.S. is pretty stoked that this came together around a plan of his creation. As I had to front the ca$h, I did reserve veto power, but I cannot recall using it.

The crew all enjoyed spring break. O.S. actually worked on this project a bit in order to create coverings for the electronics. He took his time, measured, and used clamps! The results as of this morning are below: 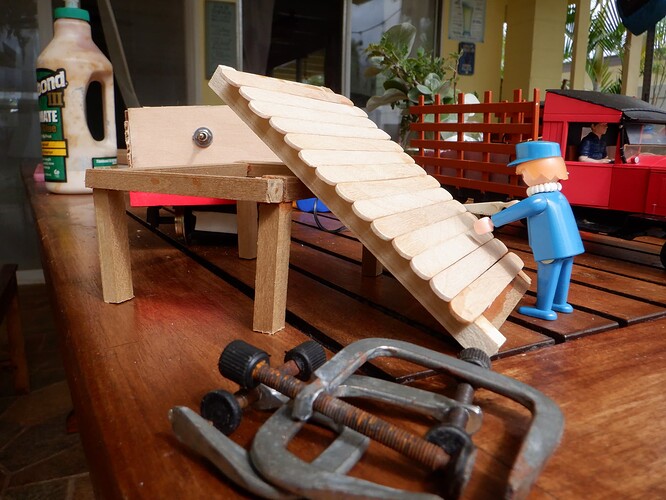 DSCF67481920×1440 211 KB
The frame to the left will get some sort of canopy. It slots into the pusher car to hide the battery and “Critter Controller.” The 1:24 guy is starting to saw away the craftsticks on a deck that will cover the foam and semi-smoked circuit board in the truck bed. O.S. wanted a deck, rather than another tarp, so that his PLAYMOBIL dudes could still use the railtruck. O.S. trimmed the craftstick ends later this evening: 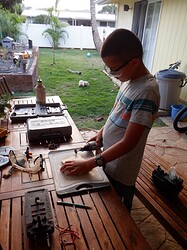 Updates as they are needed!

Work happens at the attention level of a 10 year old, but it is starting to look more finished. Over the weekend, he transformed popsicle sticks into decking… 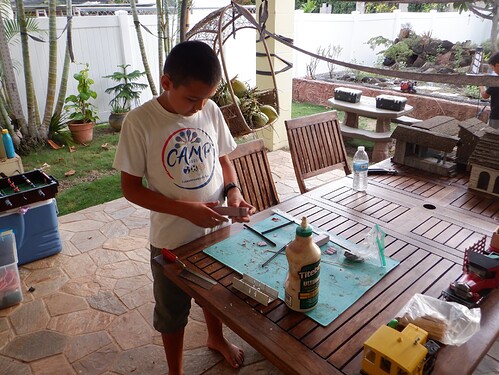 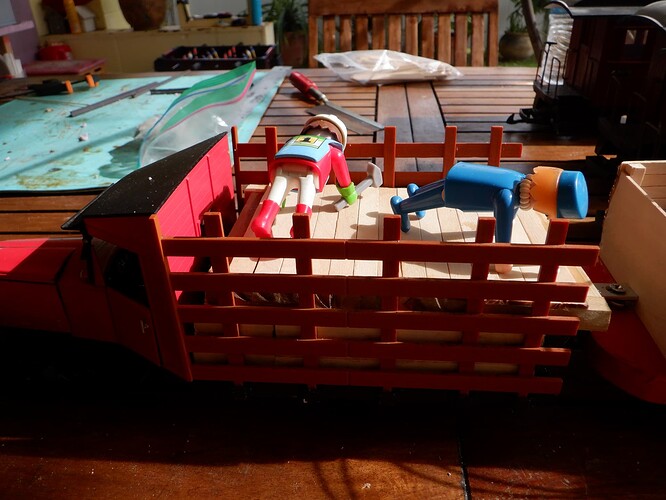 The pusher / trail car still needs some planking over the frame to support a tarp. He’ll get there!

That is looking good. I hope it works out for OS and you!

@Joe_Zullo thanks, and, yes it does work pretty well. The hard part now is keeping O.S. on task with the finishing now that his 'truck works!

The hard part now is keeping O.S. on task with the finishing now that his 'truck works!

I suffer from the same affliction. Once it functions, finishing looses importance!

O.S. cut a false top for the cover of the pusher / trail car last week… 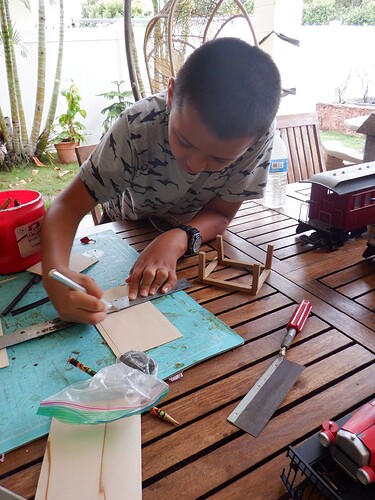 Sunday, he got Charlie back out on the track… 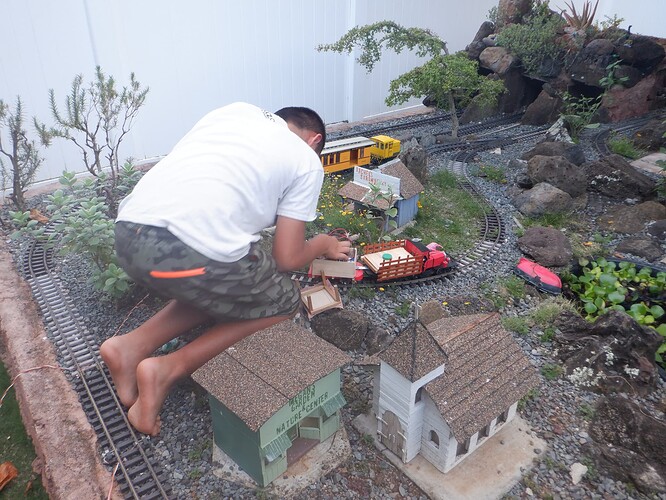 DSCF68961920×1440 377 KB
…and crummy video aside (Crummy Video That is Aside) placed his railtruck back into service almost six years to the day from when he got it. There is a lot of heartbreak and not a few dollars in this marvel of B’mann quality control, but Charlie is back, and he is back in a way that O.S. imagined and engineered.

Thanks to all, and especially to some detailed messages, motor exchanges, repair attempts, and instructions from Peter Thornton (@PeterT ) for helping get this project across the line!

On to the next project…This one is pau!