i had a problem… ((wrong! i had two problems.

one was a language problema, which i now eliminated))

the nearly all male poblation of my layout went on strike.

they had heard about the californean “buy a bride” or “bride by mail” program.

so i searched. and i found. cheap (an average us4,- per head, including transport.

there is a company, “Kinder”, that sells choclate eggs, with toys inside.

in europe these toys are collector’s items.

so i tried a site for collectors. http://www.sammlerpoint.de/ue-eier.htm

(on that page the two upper-left icons lead to the sections, where i found the figures shown below)

as can be senn, not all are exactly, what i wanted scalewise.

but i’m sure, that i can bash most to fit in. others will donate parts of their bodies for copying.

mostly all of them will need some haircut for my chosen aera.

(included some figures of known scale for comparing) 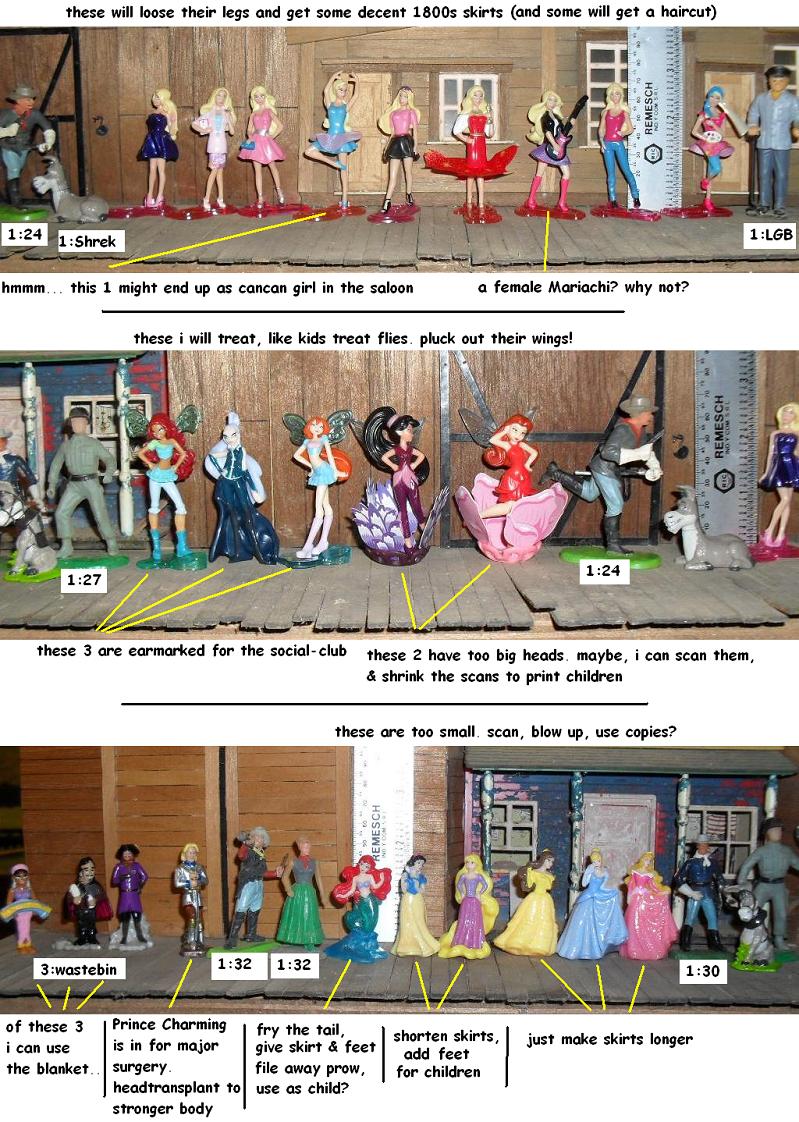 Neat Find Korm. Some of those ladies look like they could use a sandwich though. Just be careful I’m pretty sure Kinder eggs are illegal in the US because some of the toys inside chocolate could be choke hazards. (http://largescalecentral.com/externals/tinymce/plugins/emoticons/img/smiley-undecided.gif)Not sure on the rules of just bringing the toys in to the US. I have a very Euro wife and inlaws. They grew up loving Kinder Eggs and wanted our son to experience them.

Korm is a South American in Paraguay , not a southerner as you know it…

But your warning bears fruit for others looking to follow this lead.

as far as i remember, it was the combination of foodstuff with toys, that was outlawed in the US.

so if one of you guys buys just the toys from europe, he should be ok.

yes, they are a little skinny. but that is good for me, so it is easyer to make sleeves and other clothing with green stuff.

(and on the frontside, they are pronounced enough…) 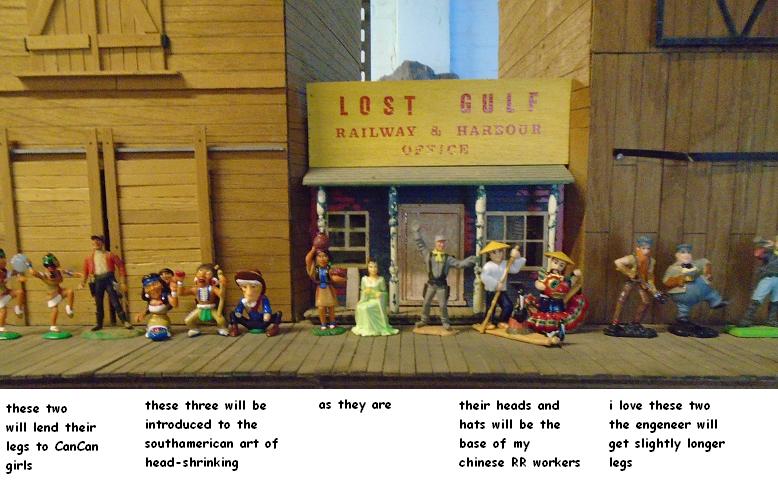 and very sloowly i am starting to prepare the figures for my layout.

meaning, they are ready for the 3D scanner, i’m expecting to find under the tree this year. 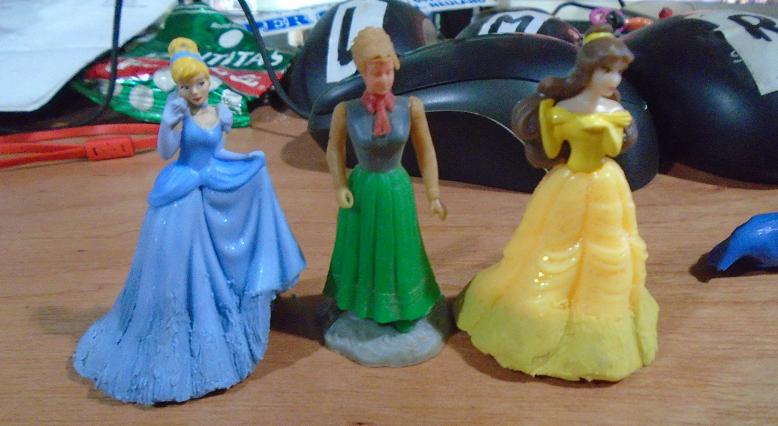 and very sloowly i am starting to prepare the figures for my layout.

meaning, they are ready for the 3D scanner, i’m expecting to find under the tree this year. Korm.

If you get the thing under the Xmas tree. don’t forget the Milkmaid… hehehehe…

haven’t. but after about a dozen tries to make a more or less true copy, i decided to wait for scan & print.

(don’t know why, but i never am able to make the real same thing again. the result is always a very loose variation.)

I hear ya… Same here. I’ll try to make another one wagging tail animated cow for ya later on… I know you need one for your milkmaid. lol.

Excellent! I just like the idea of having some feminine beauty on the old pike!

You guys are just figuring out now that you need women to keep your crews happy. How old are you?

Suleski Transportation has a female Doctor and a female Park Ranger in Blue Moose Park.

And a female officer on our Railroad Police.

Of course non of our women are cheap.

let me just stress the point, that these figures were cheap.

as nice looking as your females are, they are not females, but female giants - for my scale. (1:29)

schleich has the doctor (graduated as a vet’); girl feeding a ? carrot; also blonde female hiker with posable arms with camera which makes a great railfan {acquired a couple on sale at ToadHall, Wpg. central canada}

Oh yeah, we’ve bought quite a few of kinder’ eggs over the yrs., but I don’t recall seeing any of the tall adult figures offered here in Canada.

“…Not sure on the rules of just bringing the toys in to the US. …”

There have been news reports of Canadians being fined and having the product confiscated upon entry into the usa !

““They have been determined to present … a choking hazard to young children,” said Mike Milne, a spokesman for the U.S. department of customs and border protection. Milne said the U.S. Food and Drug Administration supports the Kinder Surprise ban…”

Maybe there is also the foodstuff combo reason, but always seems to be the possible choking hazard in the reports. {which has a lot of us ‘choking’ as this (trade suppression

is initiated by a country with a extreme death rate at home (and thru exportation)… ref: guns}

yeah, that’s civilisation for us.

if they go on refining the protection of the youth, the only toys avayable for children under ten years of age will be rubber-ducks…

(in germany modell railroads are forbidden for children under 14 now, as i heard)

i had a problem… ((wrong! i had two problems.

one was a language problema, which i now eliminated))

Hehehe…It’s Ok Korm we all knew what you meant but it’s still funny!

I didn’t know what he meant. . .I though they were just more liberated in Paraguay (http://www.largescalecentral.com/externals/tinymce/plugins/emoticons/img/smiley-wink.gif)

Any large scale figure can be used. If they are too small …

Use them as midgets or children. (http://largescalecentral.com/externals/tinymce/plugins/emoticons/img/smiley-smile.gif)

the latter is, what i got in mind. both for small and large figures. scan them, resize them for my RR, and give the “miss-sized” figures to children.

reselling is no viable option. possibly interested buyers would be in north america or europe. postage would be prohibitive.

Use them as midgets or children. (http://largescalecentral.com/externals/tinymce/plugins/emoticons/img/smiley-smile.gif)

no, does not look good. children have bigger heads in relation to their bodies. … and i don’t need pigmees on the layout.

Ok, then smaller folks could be background figures. A little forced perspective.